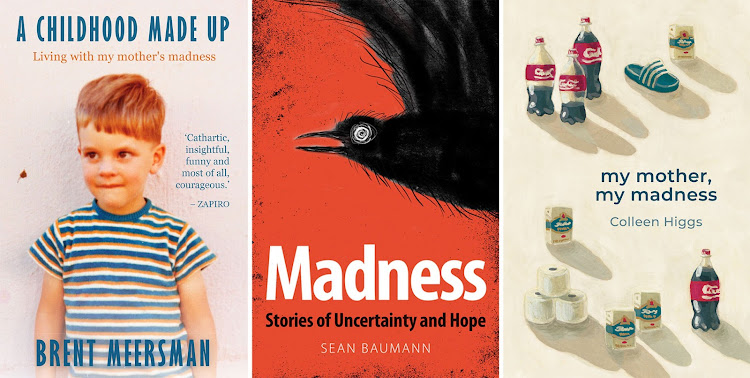 Mothers and mental illness loom large on the bookshelves this month, and though their publication date would have been set in motion last year, the books ride in on a wave of anxiety around mental health.

Sean Baumann worked for 25 years as a psychiatrist in the male unit of Valkenberg Hospital in Cape Town, with a special interest in schizophrenia. Madness: Stories of Uncertainty and Hope (Jonathan Ball Publishers) chronicles some of the cases he treated over the years and it makes for poignant and illuminating reading.

Baumann writes with a sort of impassioned compassion, crying out for better understanding and acceptance from the community for these afflicted people. It is his dream, he says, “that otherness might not be a source of anxiety and dread but a source of wonder”. He brought that wonder to life in 2017 in a powerful stage production at the Baxter Theatre, a cantata titled Madness: Songs of Hope and Despair that used his patients’ own words. It is a moving view of the unquiet mind, the anguish and, at times, elation of their suffering. “Madness is not shameful,” he writes. “It is dismaying and perplexing why extremes of human suffering should be considered shameful.”

Brent Meersman’s mother Shirley was just 29 when she was first diagnosed with schizophrenia and sent to Valkenberg. She was there for more than two years and, when she was released, she learned that her husband had divorced her and blocked her access to her young son. Such a wound is unimaginable, especially for an already fragile woman, but she remarried and had two more sons, Brent and his brother Paul-Henri.

His book A Childhood Made Up: Living with my Mother’s Madness (Tafelberg) was written after a period of psychoanalysis, when forgotten memories and images would break through and shake his carefully accreted sense of self. He had constructed an idealised childhood, but psychotherapy began to erode this and dark images crept through the cracks: a glimpse of his mother in the dead of night with a carving knife; another of her squatting in the passage, urinating, her eyes wide and glassy; a bowl of soup being thrown across the kitchen. Back into hospital she would go.

Shirley was an artist but she was thwarted not only by her mental illness but the dreariness of keeping house and their relative poverty. She detested cooking and cleaning, which took away time from her art, and her husband worked all the hours he could in a factory but could barely put food on the table. He slipped slowly into alcoholism, but supported her art.

The years creaked by, and as a teenager Meersman noted, “I was as always overwhelmed by my love for my mother. I loved her all the more because she was in pain... but her manias, her muddled cogitating, her neurotic inquests, her deep emotional needs were all smothering me.” He loved her and cared for her until she died, as she had left her husband years before. In an almost unbearably moving resolution, Meersman arranged after her death for her paintings to be framed and hung in an exhibition in a gallery. Her first-born son was there, as was her former husband. It was a gesture of rare grace.

When you have a mother like Sally, how do you recover? How do you make something of your life that isn’t all about suffering, reluctance, resistance, bushels and hiding under them

Colleen Higgs is a poet and the dauntless founder of Modjaji Books, a small publishing house specialising in women writers. She was, however, utterly daunted by her mother Sally, another woman who had suffered an appalling psychological wound. At just seven years old, she was given away to a childless aunt and uncle and was only reunited with her biological parents when she was 38. Higgs writes: “My whole life has felt like a long, deeply unsatisfying love affair with my mother. She is the beloved who doesn’t love back.”

My Mother, My Madness (Deep South) is Higgs’ diary of her mother’s last 10 years, spent in a “Luxury Retirement Resort” near Century City. It takes courage to be truthful about the frightfulness of a parent, but Higgs writes with frankness and the tale is tender and compelling. Sally sees out her days in a recliner, smoking three-and-a-half packs of Rothmans and drinking two litres of Coke a day. The walls are yellow with nicotine and the carpets grey with fallen ash. She looks, says Higgs, like a bergie — dank hair, crumpled clothes, and long toenails. She had been diagnosed with bipolar syndrome and early-onset dementia, but often doesn’t take her meds. Her teeth fall out. She flushes away her soiled broekies and Higgs is constantly buying new ones, along with the monthly Cokes and smokes, four packs of nine double-ply toilet rolls, snacks, and You magazines.

“I’m the receiving station, a clearing house for all of Sally’s problems and troubles, claims and payments, woes and needs, complaints, sadnesses, despair, discomforts and small pleasures,” she writes. At the same time, Higgs is mothering her own young daughter and drifting apart from her husband. Her insight and resoluteness are admirable.

“When you have a mother like Sally, how do you recover?” she asks. “How do you make something of your life that isn’t all about suffering, reluctance, resistance, bushels and hiding under them? Sally is what there was. She was my mother, the roots that fed me as I grew.”

• Sean Baumann’s cantata Madness: Songs Of Hope and Despair can be viewed on YouTube.

Beukes' latest book is so prescient, so true-to-life that it chills the reader to the marrow
Voices
10 months ago

New book provides much more than insight into what shaped his genius — it is a fine guide for the uncommon reader, too
Voices
1 year ago