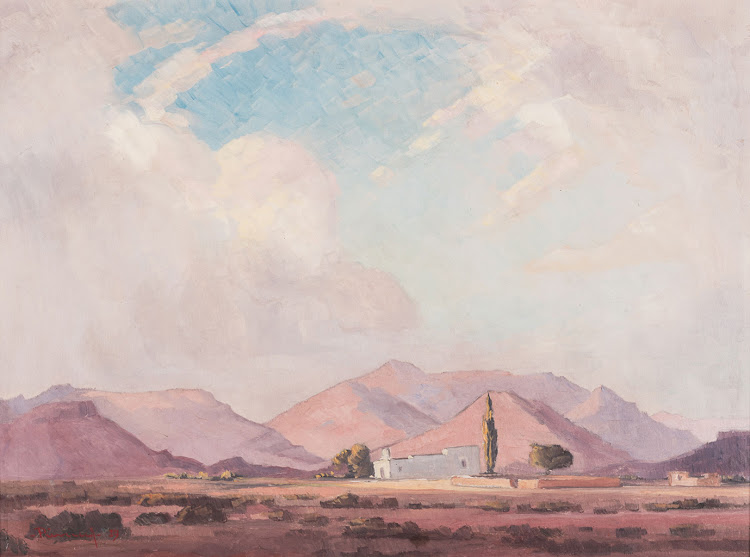 In October, a painting by Jacobus Hendrik Pierneef, South Africa’s best-known 20th century landscape painter, whose works regularly fetch millions, was impounded by the Hawks. It had been presented to art auction specialists Strauss & Co for valuation; after they became suspicious and did some investigation, they discovered that it actually belonged to the premier’s office in Bloemfontein. Outgoing premier — and current ANC secretary general — Ace Magashule was implicated in its disappearance. Reports suggested it had been removed from his office, along with various personal belongings, and ended up at his house. He allegedly gave it to his bodyguard as a gift. A third party contacted Strauss & Co with the intention of selling it.

“It was one of those instances where the picture was too fantastic to come to us with no provenance or story. We were immediately suspicious,” says Alastair Meredith, senior art specialist at Strauss & Co. “It had identification numbers on the back that suggested a large collection.”

Meredith figured it might be part of a government collection. He called on Gerard de Kamper, chief curator of ceramics and collections management at the University of Pretoria and a highly respected provenance expert, and Jan Middeljans, a conservator, appraiser, and Pierneef expert at the Ditsong National Cultural History Museum, to look at it. They confirmed his suspicions.

A 400-year-old painting by Flemish Old Master Rubens has come to light in Joburg, and is up for auction
Art & Design
4 years ago

They weren’t, however, immediately able to trace which department it belonged to. The details on government lists are often sketchy. “The asset registers are pretty-much threadbare,” Meredith says. They often have little more detail than simply stating “Pierneef painting”, which doesn’t help to identify specific works.

Strauss & Co published calls for information. Eventually somebody recognised the painting and it could be traced to the premier’s office in Bloemfontein. “That night the Hawks were in our office and they took it,” Meredith says.

It has been returned to the premier’s office, but, says Meredith: “The elephant in the room is how many state pictures have disappeared?” There is plenty of anecdotal evidence that other state-owned artworks have been sold on auction overseas.

Middeljans has personally identified two government-owned works that went on auction. “I’m not going to say where — not on the local market,” he says. He wrote to the auctioneers to alert them, “but the person ignored me, and they sold the paintings”.

HOW MUCH ART CRIME IS THERE?

That is a particularly headline-grabbing example of an art crime, but what is the state of art theft in South Africa? “The theft in the departments is, I think, fairly limited,” Middeljans says. He doesn’t see anything but “incompetence” in the theft of the premier office’s Pierneef. “They didn’t know what it was,” he guesses.

The museum was fleeced of R17.5-million worth of paintings by the likes of Irma Stern and Gerard Sekoto

Massie and Middeljans both mention one of the most high-profile thefts of recent times, which took place in 2012. The Pretoria Art museum was fleeced of R17.5-million worth of paintings by the likes of Irma Stern, Maggie Laubser, and Gerard Sekoto in an armed heist. Most of the works were later found under a bench in a Port Elizabeth cemetery after a Crime Line tip-off. “The last one, the Sekoto, I traced to the US,” Middeljans says. That particular heist was blamed on a prominent Pretoria artist (who remains mysteriously unnamed in all the reports of the crime), who allegedly commissioned the thieves to steal the works for them.

But it turns out, art crime in South Africa, has little to do with what Massie refers to as “a Dr No type character sitting there … ordering these things”. Meredith says he has heard about possible syndicates, but, despite his immersion in the market, he has heard very little that’s verifiable about organised art crime. Targeted thefts are more of a problem abroad than in South Africa.

There is anecdotal evidence that a rare Chinese artefact in a local museum was specifically targeted, and, although rumour has it a security guard was bribed with a million rand, he reported the incident and the robbery was foiled.

In South Africa, at least, the art theft racket is enabled not so much by sophistication and connoisseurship, as by ignorance and greed. Neither the thieves nor the people who are used by thieves as a laundry for fake or stolen works, seem to grasp accurately how the art world works. Massie says most often he suspects thieves “see that an artwork is worth R1-million, and they think they’ll get R1-million”, which isn’t the case.

Although everyone I spoke to while researching this article agreed with Massie’s wry description of the market as “heavily unregulated” — there’s no police department dedicated to cultural crime or heritage objects; they’ve been seconded to rhino poaching — they all noted that the art market in South Africa is so small that it is actually very difficult to launder stolen or fake works. So you end up with the slightly contradictory situation where the market is unregulated and hardly policed and the archives aren’t comprehensive, but it’s still really difficult for thieves to monetise stolen works through legitimate channels.

“You can’t buy an illegitimate picture and do anything with it,” Meredith says. “The opportunity to genuinely liquidate a major picture in this market is tiny.”

“There’s this presumption that in South Africa the art world is disjointed, but they’re not as disjointed as people think,” de Kamper says. “If somebody brings in a fake (to an auction house) within a day or two all the big auction houses know about it.”

“If (the thieves) don’t have an endgame, it’s going to be very difficult for them, because — even if (stolen artworks) pop up in the auction world four or five years later — there’s the art theft register, there’s knowledge, there’s a question about provenance,” Massie says.

In March this year, the cover work on the catalogue for the Bonhams South African Sale was an impressive-looking work by Alexis Preller, at an estimate of between £50,000 and £80,000. By chance, a friend of De Kamper’s had alerted him to a similar (or the same) piece that had gone on sale in the UK some months before.

“It sold at another auction house called Eastbourne Auctioneers in England,” recalls De Kamper. They both noticed how similar it was to a work that had been sold at local art auctioneers Aspire for more than R7-million.

De Kamper saved the picture. “And then, three or four months later, when the Bonhams catalogue comes out, (there it was) on the front cover,” he says. “I thought, is there another copy … or is it that one from Eastbourne Auctioneers?”

The “Eastbourne” work hadn’t actually been identified as a Preller. Although it was obviously a copy, and had been painted in Preller’s time, it had been signed with the initials “GR”. In the months between its sale at Eastbourne Auctioneers and Bonhams, however, the initials had been painted out, and a forgery of Preller’s signature had been added. “I sent my finding to Bonhams,” says De Kamper. It was quietly withdrawn from the sale.

You can’t buy an illegitimate picture and do anything with it. The opportunity to genuinely liquidate a major picture in this market is tiny

De Kamper suggests that fakes are “a bigger problem than stolen artworks”. He reckons about a third of the works he’s asked to investigate are fakes. “There’s somebody in Canada that fakes high-end artworks,” he says.

Middeljans knows of others who fake Pierneefs in the Free State and Natal. In the noughties, there was the famous case of Frans Claerhout, once a highly collectible South African-based Belgian painter, whose work was forged in Bloemfontein. And Meredith makes reference to a particular group of artists for which he sees more fakes than real works, but won’t be drawn on the details.

Middeljans says that for thieves, fakes are better money than stolen works. They’re easier to sell, sometimes via online platforms. “I think you’ll find that that particular forger made more than 800 (online) sales,” says Massie, referring to the Claerhout fakes. “The buyers were delighted to be buying for R5 000 for something that they thought was going to be R50,000.”

Middeljans says the quality of forgeries tends to be amateurish. “The Free State Pierneefs are rubbish,” he says. “The Natal Pierneefs are just … naaah. The guy must learn to paint!”

Nevertheless, De Kamper points out that minor works by famous artists are the favourite terrain of forgers. “For example, they fake Pierneef sketches or little water colours,” he says. “It’s much more difficult to trace the provenance, because they’ve normally never been published before (and) they’re easier to copy because they don’t need to be a complete work. If I find a sketch by Maud Sumner or Pierneef, except if it’s something very, very specific and well-known, I’m not even prepared to say whether I think it’s real.”

One of the frustrations, Susie Goodman, executive director at Strauss & Co, says, is that: “The problem is we can’t do anything about a fake if it walks through the door.” They can’t impound it or shred it. Meredith adds: “There’s legally nothing we can do.”

Still, there are initiatives in the pipeline to improve the fight against art crime. “The government is trying to restart a committee to combat cultural crime through the department of arts and culture,” Massie says. From next year, the University of Pretoria (UP) will offer a masters degree in conservation. There is also talk about plans to digitise UP’s archive — the largest in the country — to make it more efficient.

But how do art buyers protect themselves? “I think, if you are going to invest meaningfully in the art-collectibles world, you should do it via dealers, auction houses or galleries of high repute who have done all the checks and balances,” Massie says. And for heaven’s sake, don’t be greedy — if it looks too good to be true, it probably is!

Past auctions and interesting reads...

Brush up on what's available at four upcoming art auctions

With so much top art going under the hammer this spring season, we put together a quick highlights package… Now grab a paddle!
Art & Design
3 years ago

If there is one artwork everyone will be watching in the next 24 hours it must be a painting titled Homage to Hieronymus Bosch by Alexis Preller ...
Art & Design
4 years ago

Few people get to work in an office alongside a painting that could be worth R16-million. This could be due to the fact that there are only a few ...
Art & Design
5 years ago