The world’s top watchmaking and jewellery houses make extensive use of decorative arts. We take a closer look at gem-setting 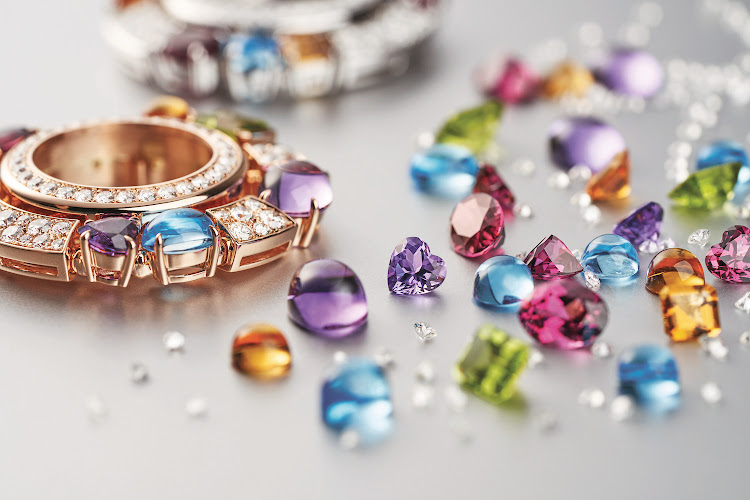 Bvlgari Allegra 36mm with round, brilliant-cut diamonds, faceted and cabochon gemstones, and a mother-of-pearl dial and indexes set with 12 diamonds in 18kt rose gold.
Image: Supplied

As a decorative art, gem-setting is deemed to be at least as difficult as mastering watchmaking itself. “Early watches, like early clocks, were not especially reliable timekeepers, but they were extremely expensive, as they were mechanical amusements that only the very wealthy could afford.

As a general rule, no expense was spared in making their decoration as lavish as the client’s pockets were deep. Enamelling, engraving, marquetry, gem-setting and, later, engine-turning were all used extensively, and materials were as varied as they were costly,” writes Jack Forster in Cartier Time Art: Mechanics of Passion.

France and Switzerland in particular became known for the use of elaborate decorative arts in horology. Finely engraved cases, sometimes lavishly set with pearls, diamonds, and other gems, were made by French and Swiss watchmakers for nobles and merchants who collected timepieces that were as remarkable decoratively as they were mechanically. “At Cartier, the appreciation and use of such decorative art and crafts is found almost from the very beginning,” Forster writes. Pieces chosen by or commissioned for Cartier were memorable for their lavish ornamentation, the earliest example in the Cartier collection being the chatelaine watch, dated 1874. (A chatelaine is a chain that hangs from the waist. A chatelaine watch was considered highly fashionable when worn hanging from a belt.)

Both the chatelaine and the case in this instance were decorated with pearls, demonstrating a level of gem-setting artistry that Cartier still strives for today. A wealth of techniques, including gem-carving and -setting, continue to be represented in its Métiers D’Art collection. These are just some of the artisanal skills that are highly valued for their rarity and complexity, which in turn influence the pricing of the pieces that showcase their prowess. Leading watchmaking and jewellery houses try to keep these in-house and, if necessary, invest in training talented individuals to ensure continuity of savoir faire. 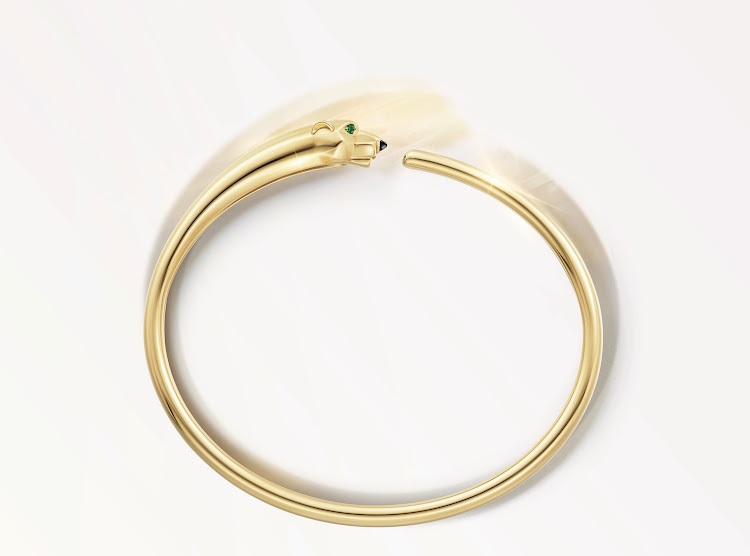 An artisan who specialises in gem-setting must have extreme patience and self-control to be able to handle a precious stone with just the right amount of pressure to prevent it from shattering in the setting process. Chopard describes gem-setting as a form of sculpture, which can be crafted in various ways.

Prong-setting clamps the gem between several precious metal rods, while bezel-setting is where the gem is encircled by a metal belt. Invisible setting sees the metal “disappear” to allow the stone to shine, while magic-setting was developed to further enhance precious stones. One of Chopard’s signature techniques is the dropped setting, which involves using successive rounded borders, cut directly from the metal with gravers, and bent back over the gems. “All the stone varieties that pass through my hands have their specificities, and it is only through experience that I am able to deal with each one without breaking or damaging it,” says Carlos, a Chopard artisan gem-setter. “It’s a daily challenge. Thanks to our passion, we create beauty.”

At the Graff atelier in London, master crafters use stone-led design techniques to enhance the beauty of the stones they incorporate into their watches and jewellery. The high-jewellery Tribal collection, primarily featuring unique pieces, was photographed on the Atlantis dunes in the Western Cape when global lockdown travel restrictions eased. In the accompanying images, the New Dawn motif is featured as a signature of the collection. Described as an “explosive sunburst symbolic of life, energy and power”, the jewels harness the glow of the rising sun and speak to the “soul of the eternal beauty of nature”. The designs are inspired by a San story about a girl who created the stars. 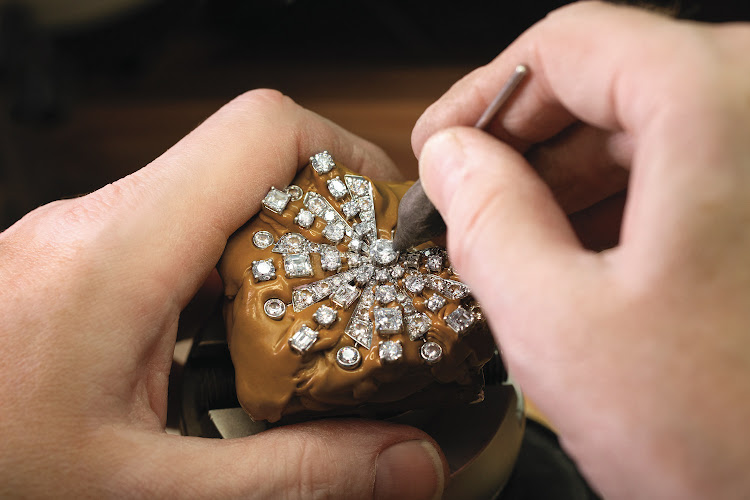 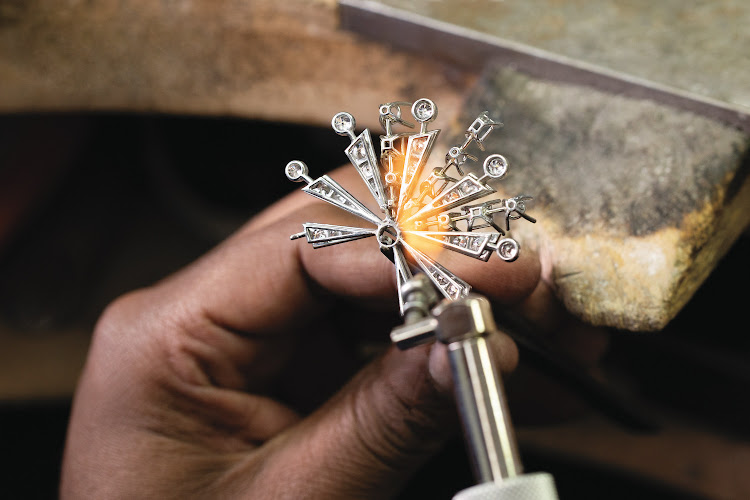 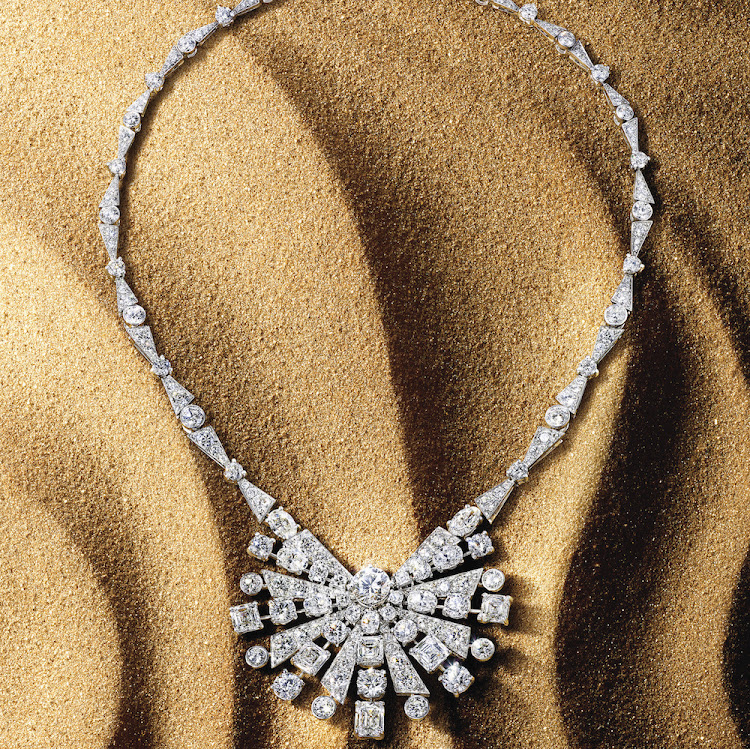 For this year’s submission for the bi-annual Only Watch auction, Maison Boucheron revisited its enchanted bestiary to celebrate its enduring charm. Boucheron’s jewellers excel in creating delicate sculptures: chiselling, polishing, and using very precise pavé techniques to bring these animals to life. The Ajourée Masy le Caméléon jewellery watch dial highlights the chameleon’s body pavéd with round diamonds, multicoloured sapphires, tsavorites, and rubies. This creation is incredibly complex because of the creature’s curved form. 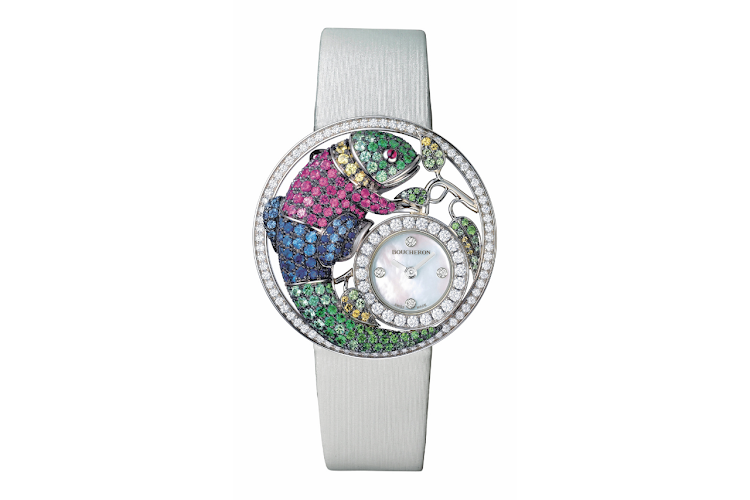 Boucheron Ajourée Masy le Caméléon with round pavé-set diamonds, multicoloured sapphires, tsavorites, and rubies in white gold. It is a complex creation, due to the chameleon shape.
Image: Supplied

Meanwhile at Piaget, the responsibility lies with the best gemmologists to source quality stones that match the drawings for each piece and can be cut accordingly. In the case of the Limelight Gala Rainbow watch, the designers mixed different types of stones to find the perfect colours, sapphires of different colours but also green tsavorites. And for the Limelight Gala High Jewellery watch, they found the best-quality opal in Australia. Both pieces were revealed at Watches & Wonders Geneva 2021 “Then the hard part begins: cutting very thin slices of opal and stiffening them. At each step of the process — cutting, machining, glueing — you have high risks of breaking the opal,” says Cynthia Tabet, global product-marketing director for Piaget. 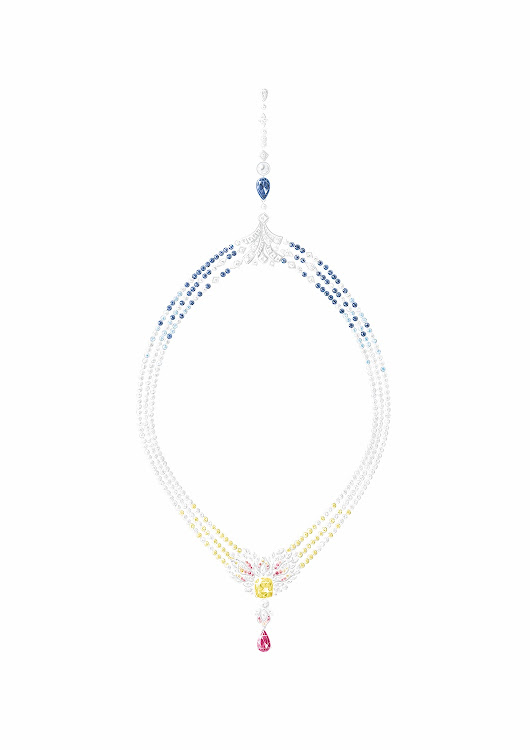 Moraglione artisans are tasked with cutting, shaping, and polishing the rough stones selected by hand for their jewellery collections. Precious stones crafted in perfect proportion are featured in contemporary jewellery pieces inspired by classic elegance. For Moraglione, it’s all about artistic expression and extracting the qualities that will accentuate the femininity of the woman who wears the jewels.

Craftsmanship is centre stage for Bvlgari when it comes to jewellery creations that feature head-turning combinations of precious and semiprecious stones. Bvlgari’s head of high jewellery, Giampaolo Della Croce, says the gem represents the soul, the spirit, of the jewel. “You need to have very skilled artisans who can pass this passion into the jewel. This is the beauty of Bvlgari’s craft. It’s a work of art but also a feat of engineering — how the necklace can be worn as a second skin. This sort of craftsmanship is difficult to achieve. It’s as rare as the stones.” 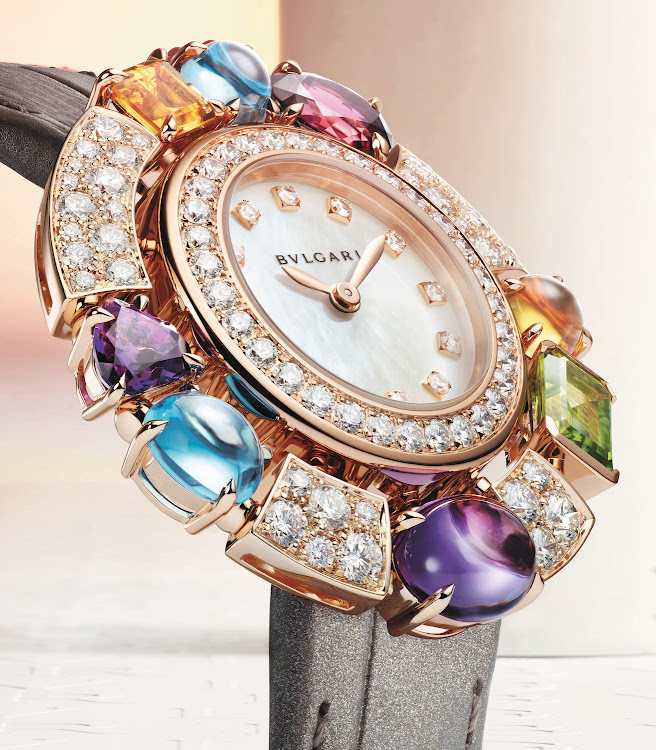 Bvlgari Allegra 36mm with round, brilliant-cut diamonds, faceted and cabochon gemstones, and a mother-of-pearl dial and indexes set with 12 diamonds in 18kt rose gold.
Image: Supplied

If you want to up the stakes in the gifting department, here are some beautiful pieces of jewellery that will add an immediate and long-lasting shine ...
Watches & Jewellery
4 weeks ago

What could be a nicer treat than a little piece from the Madame Butterfly Collection this summer?
Watches & Jewellery
1 month ago