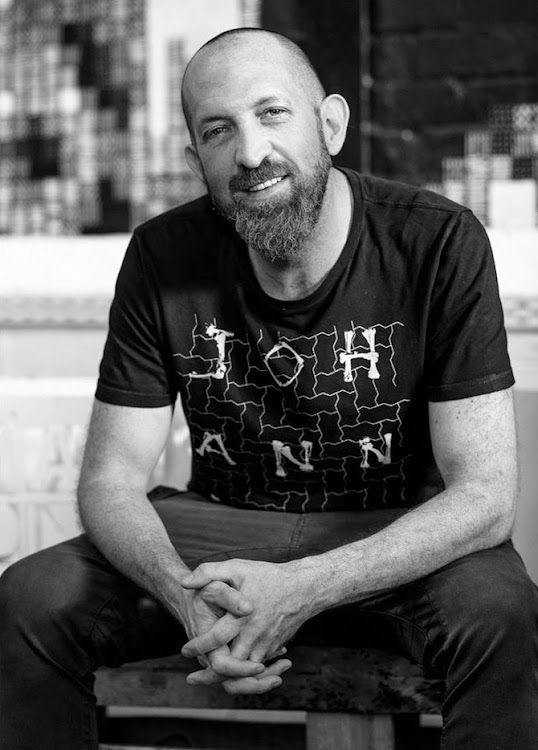 Bradley Kirshenbaum is the man who put the “Oh!” into Jozi. The creative brain who, close on 15 years ago, stylised the city’s skyline, slapped a copyright on the graphic, and registered the trademark Love Jozi. He saw something in the rancid old bat of a city that most didn’t: its coolth. He started out with a witty t-shirt brand, and along with his partner Jacques van der Watt, expanded it to a gift and product range. Not only hip, it was also cool with a conscience, its view slightly askance, both urban and urbane.

They planted olive trees in the inner city, summoned growers and designers to form the Market on Main in Maboneng and for once, on weekends, people flowed in from the suburbs instead of the other way around. The energy around it pooled and spread out, and suddenly it seemed certain words were in the air: rejuvenate, regenerate, revive, renew. Downtown Jozi was being resurrected.

Over a decade later, and the time was ripe for a book to chronicle Love Jozi’s reflexive relationship with the city. It is titled, not surprisingly, I Love You I Hate You: A Book About Love, Hate, a City, and Lots of T-Shirts. Editor Laurice Taitz-Buntman has divided the book in two.

One part is concerned with design and showcases the striking images and wells of inspiration that Love Jozi draws on. There are street maps and moody photographs, portraits of urbanites, and strange doodles. And, of course, the t-shirts. Stamped with knowing aperçus and fragments of wry commentary, they are an ongoing in-joke that only Joburgers get. For instance, the Trashy range of t-shirts references the urban recyclers with their swaying loads of rubbish; the swing tags of the CityBoy range features small fold-out maps of the inner city. “No one reads your blog,” winks another tee. 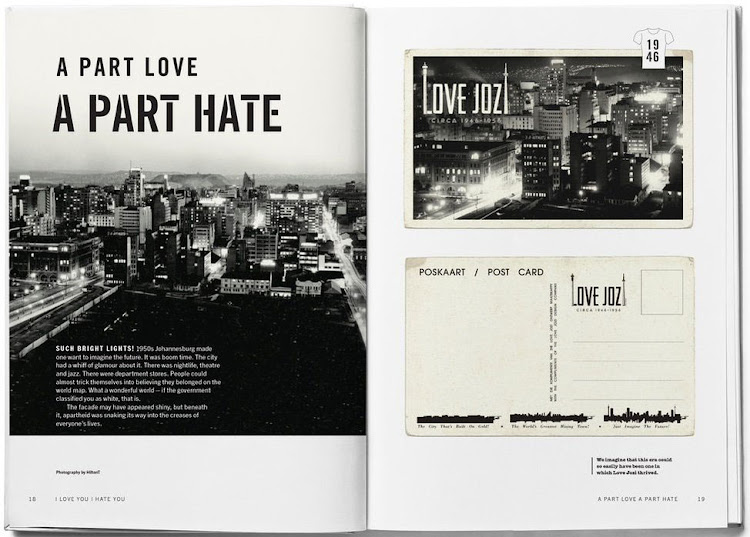 Inside 'I Hate You I Love You'.
Image: Supplied

In the other part, Taitz-Buntman has wrangled 30-odd writers and observers to tease out their complex relationships with the city. Taking a t-shirt slogan as a starting point, they riff on their Jozi lives. Here’s the veteran essayist Gus Silber:

“We fetishise unloveliness in Johannesburg: our spirit beasts are a mutant cricket, a dagger-billed bird with oily feathers and an ear-splitting cry, and a spider that scurries up the inside wall when it rains. But there is a certain beauty in brutalism,” he continues, “in buildings that draw your eye to the clouds, even as they bring you right back down to earth.”

When writer Niq Mhlongo was asked to name the new creative precinct downtown, he remembered how he used to buy his clothes there at a shop called Pappas, and his Chuck Taylor Converse takkies at Jeppestown’s City Outfitters. He first wanted to call the area eMarabini, after the dance, but settled on Maboneng which features in his novel After Tears when a character says, “Welcome to Jozi Maboneng... The Place of Light.” 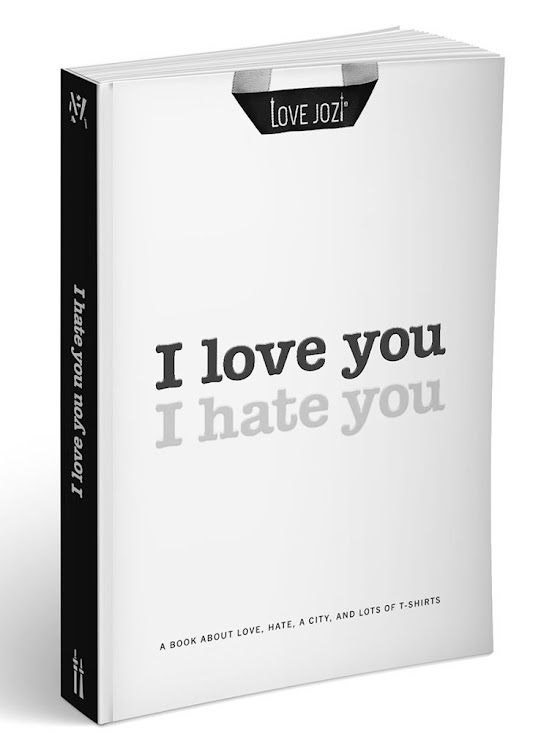 Tanya Zack cracks open the so-called Ethiopian quarter in Jeppe, cupboard-sized shops crammed into what were once doctors’ waiting rooms. Taitz-Buntman sidesteps a cow head rolling towards her in Newtown.

Responding to a t-shirt slogan that says “Nostalgia is a filthy word”, actor and writer Matthew Krouse remembers the Hillbrow of the 1970s where people were “determined to party the fascism away”.

“At La Poupé the dance floor was surrounded by tall mannequins, Barbarella had a bubble machine. The Together Bar, for lesbians only, was in a nice hotel and was renamed the Fish Bowl. Cloud 9 was in a revolving restaurant at the top of the Hillbrow Tower before it became a struggle-era police surveillance station.”

For some, Jozi was a refuge.

Journalist Sylvia McKeown fled conservative Pretoria, “a little lost husk”. There were parties in bowling alleys and on the rooftops of hospitals, secret passwords and Victorian costumes mashed up with Studio 54 glow sticks. “My father had died and running away towards love and Day-Glo saved me. Joburg saved me. The same way it destroys so many others.”

For those of us who call it home, the book captures our maddening ambiguity towards it. We do love it, at times we really hate it. As Kirshenbaum says, “Joburg inspires and disappoints me simultaneously every day — and I use the chaos to my advantage!”

'Untitled: The Real Wallis Simpson, Duchess of Windsor' throws some unusually warm light on the woman everyone loved to hate
Voices
9 months ago

Danish cosy living and Japanese purpose-searching are so 2018. Here’s what’s bubbling up in the cauldron of lifestyle trends
Voices
1 year ago

Fierce and beautiful, the novelist smashed through the social and sexual barriers for women in Ireland and beyond during the 1960's
Voices
1 year ago