Prints shake from the walls as artist Tony Gum along with a bevy of fellow Xhosa women dance in traditional dress with a passion and force that can only be described as defiant. People push hard to pack themselves into a tiny, once colonial room, in a house turned gallery to crane and find Gum's small frame stomping her feet hard against the wooden floor and singing songs that were once deemed lesser to sing. It's powerful. It's a moment where her art springs from the walls and speaks of things much bigger than it self, where she is no longer just some “It girl” who clocked it in the New York art scene. She is a proud local voice that our art scene so desperately needs. 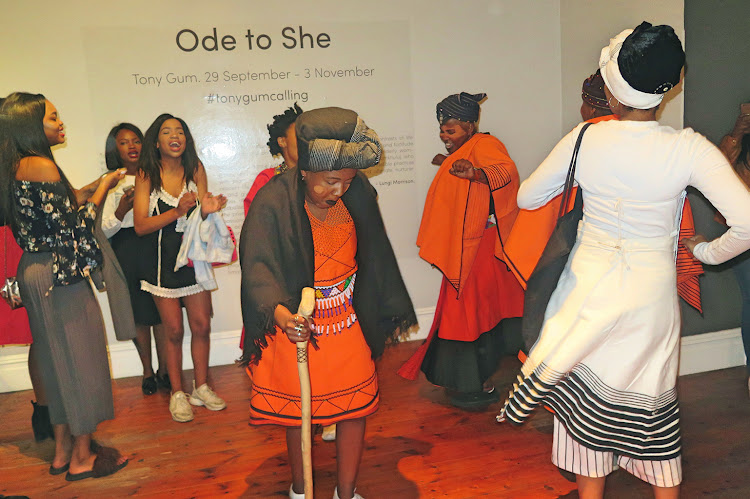 “Ode to She” is Gum’s first Solo exhibition in her home country. The show is comprised of photographs and mixed media works of her explorations, discoveries and understanding of the teachings by her elders of what it means to be a Xhosa woman.

There are self-portraits of Gum passively staring out to meet your gaze while painted green as though she were a Gauguin girl or a Trechikoff figure. She reclaims her people’s othering and sets forth to question her place in a modern world by mixing the application of traditional paints in the style of western make up. There is a slight cheekiness to the works at first glance that melts away when you see how the intended audience engages with it and sees themselves in Gum’s questioning of her place. Not just in her culture in a westernized construct but in the art world itself that perhaps took her before she sure she was ready to be taken.

To say that the opening night of her exhibition is a moving one would be an understatement. A man screams loudly on the phone "come to where the people are," it's so ironic and perfect nothing more need be said.

We spoke to the artist to find out more about her vision: 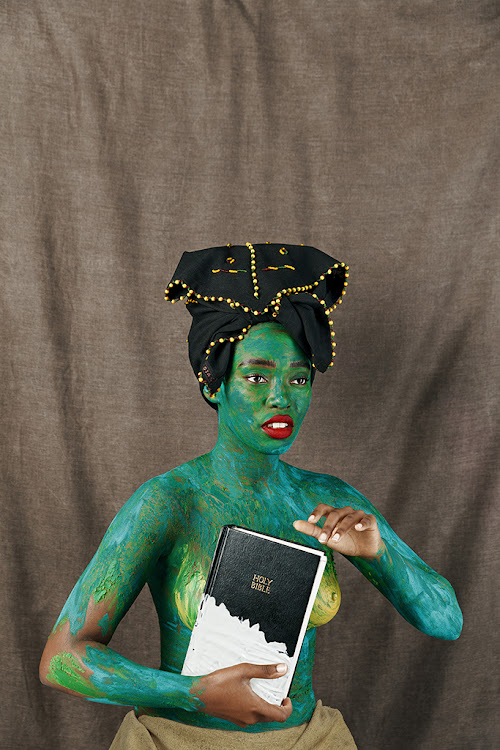 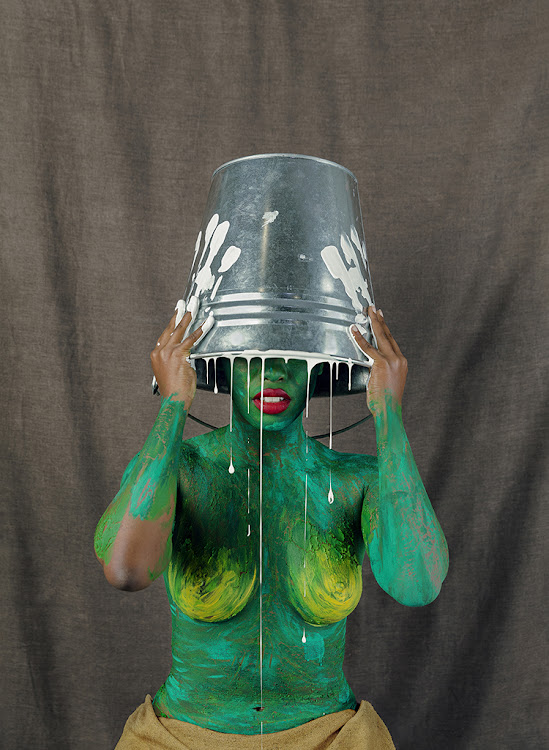 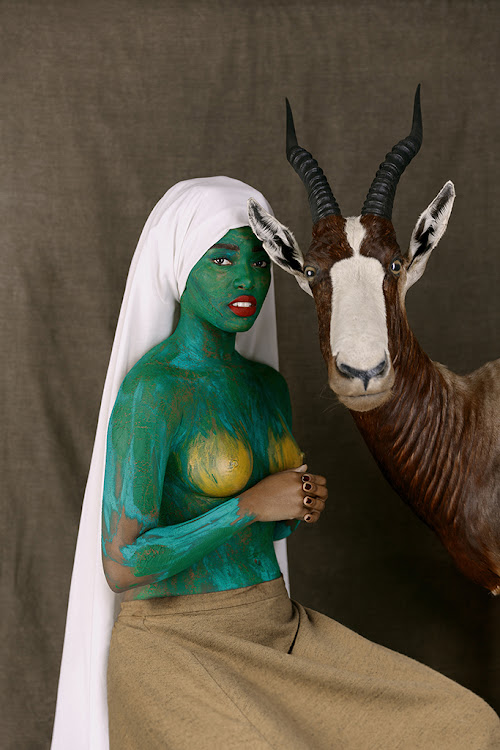 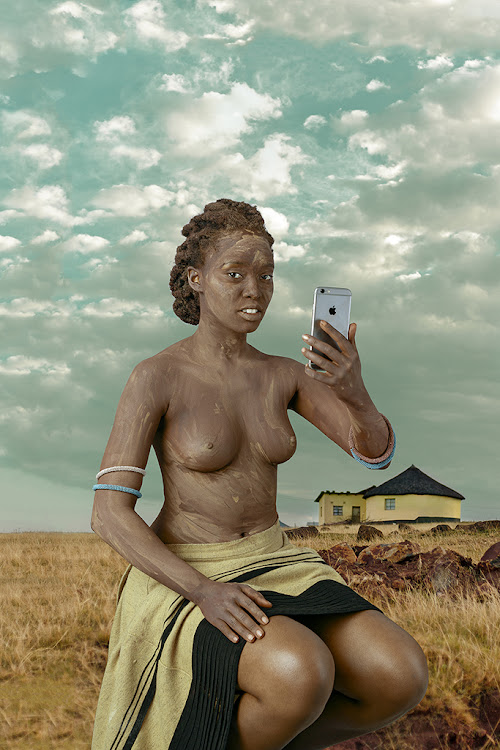 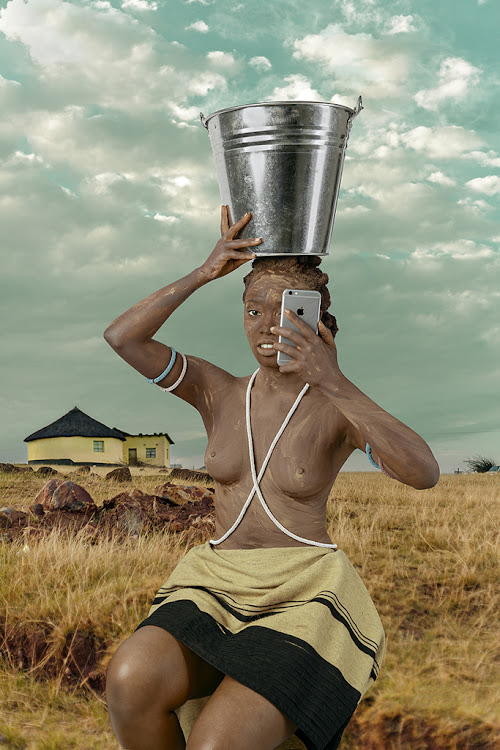 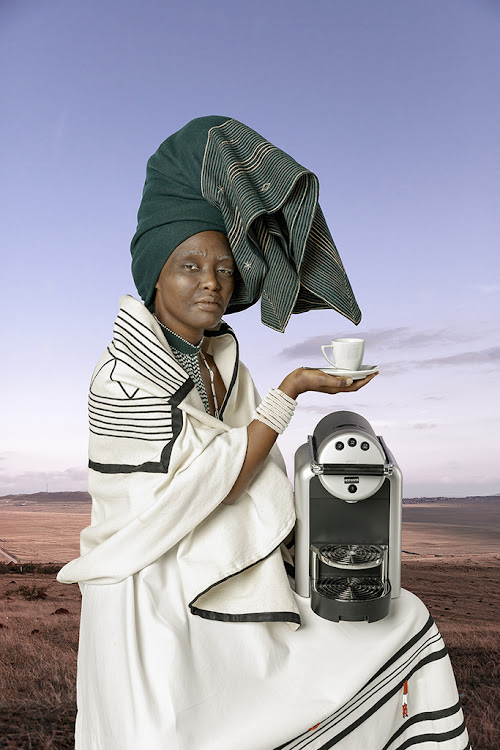 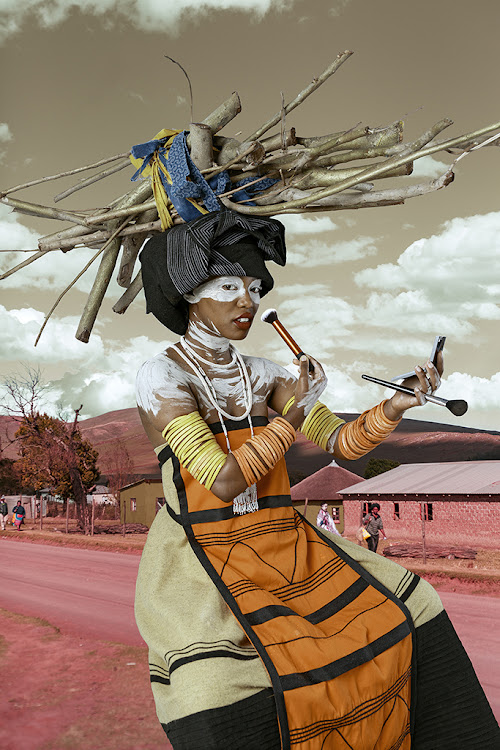 What was your intention and exploration in Ode to She? I was trying to get to the point of really understanding who I am in this space of the world that I am living in. It was a very personal journey, trying to navigate whether my identity and my culture could really be cohesive in a very modern, westernized world. I understand that these worlds need to coexist in order for me to understand my identity in the first place but I needed for them to have some formal marriage in order for them to survive.

Some of the things that I have conducted within the works are somewhat taboo; like having red lipstick or having a cell phone in conjunction to traditional posture. It is about me rebranding and trying to understand what culture means to me as a young woman living in the 21st centaury but at the same time educating young girls and Xhosa folks about what their culture is and how we can celebrate our traditions. Not just only in ceremonial practices such as weddings where it only happens once or twice a year. We need to be able to fall into these practices and make them an everyday, living practice.

What I would love to reiterate to other people is that as much as it was a personal experience it must absolutely go beyond myself. Where we can actual unite each other within these kinds of spaces almost just take ownership of what is rightfully ours. That’s what the exhibition was about; it goes beyond Tony Gum.

How did it feel after the massive amount of recognition from everywhere else to finally get your first solo exhibition back at home? I felt it was necessary because the main people I was talking to were here. It would be quite pointless to have this body of work and not make it accessible to there people you are actually trying to speak to. It was quite nerve racking. I was very scared of how the women would receive it because those are my primary subjects and the audience that I speak to. But once that seemed to go ok I could breathe and know that it was going to be a good night and I didn’t worry about anything else.

Did becoming an international sensation drive you to do more localized investigations? Definitely. You know, when people say “you’re making it” it means that you are thriving and flourishing outside of your home space but in order for me to control that I needed to take home with me if that was to happen.

I was making sure that my culture, home and South Africa was the driving force in my work and then immediately I found myself in New York and Miami. It made me really aware that I need to start understanding where I come from and do some research. So that was my personal quest.

It must have been hard. You were all of a sudden picked up by America and became the “African It Girl.” A whirlwind beautiful art romance. But you were still a relatively young artist at this stage just trying to figure it out? Ja, at the same time I entered this art world quite prematurely. It was thrust upon me – not to say I’m not grateful for the opportunity - but when I speak to myself when I am alone it feels a bit unfair. I hadn’t been given the chance to figure out my trademark and what it is that I want to do in this art world. Ultimately, although it was rushed, I think that it really provoked me to figure out why am I in this space. What am I going to do about it? I can’t just keep “taking pictures of myself” and expecting people to still think that’s relevant. The message needs to progress so it can keep moving, allowing the message behind the works to become deeper. And to do that I will l have to go beyond myself.

I guess you have to figure out if you still have things to say in your own representation, which I think you do. There is trend of African women questioning their identity through self-portraiture… For me trend would be the incorrect term for it. For me it is a form of revolution with women taking the position of taking that stance into their own hands.

Much better word! For the longest time any form of documentation wasn’t necessarily the women’s role. Now that women are now taking that into their hands and actually being the subject I think that’s a very revolutionary stance, as not only are you the subject but you are now telling the story and documenting it.

It’s been overdue and it’s about time that as women we find a way of telling our own stories. It needs to become normalized even if it’s with the most mundane everyday thing such as taking a selfie. I know a selfie might be a very poor example but it’s a simple one and got me to this point.

We need to become more self-aware as women and human beings so as to understand ourselves because by understanding ourselves, so we may understand the next person.

Witness this investigation of understanding at Tony Gum’s “Ode to She” at the Christopher Moller Gallery in Cape Town, until 3 rd November.

Artist Buhlebezwe Siwani on being a Sangoma, her ...

Artist Samson Kambalu on art and the gift of creating