Artist Dumile Feni is perpetually “returning” to South Africa. At least this theme appears to haunt stories relating to the late artist’s work

The last couple of weeks have seen the name Dumile Feni in the headlines, attached to the “returning” of the artwork Children of Apartheid, a charcoal drawing he made in 1987 while in New York.

It will be a lot on the Aspire Winter Art auction in Joburg this evening (17 July), summoning its veritable “return” to the country of his birth. This, of course, all depends on whether a South African buys the artwork – this new auction house reports a rise in international buyers.

The “returning’ motif is perhaps likely to be the fate of all the art produced by an exiled artist. The work of Gerard Sekoto, the South African artist who perished in France, is also used to enact his “return” to the land of his birth. The underlying tragedy behind Feni’s unfulfilled return is that he had booked his ticket back to Joburg. He would have “returned” if he had not died suddenly of a heart attack in a jazz store in 1991. This fact has perhaps further fuelled the persistent importance in the perceived return of his art back to South Africa.

Themba Khumalo’s broody landscapes evoke the state of the nation

Barren fields, an absence of colour and moody cloudscapes in Themba Khumalo’s latest work add up to an emotional depiction of the poverty and ...
Art & Design
5 years ago

It is likely the best of him, his oeuvre, will never make its way home, as it is in foreign hands. When Prince Dube staged a retrospective of Feni’s art in 2005 at the Joburg Art Gallery, he was caught up in an extensive, complicated, and sometimes unsuccessful (some collectors didn’t want to lend their works) drive to loan works from overseas collectors.

This idea is affirmed when you peruse the Feni works that have over the years been auctioned through the London Auction House, Bonhams. The works you will come across are incredible. The 1966 sculpture dubbed “The Scream”, which echoes the title of the infamous Edvard Munch work, features a typically contorted Feni figure. Applause, a 61cm head of man bearing Feni’s stylised language is similarly extraordinary. It sold for over a R1-million.

In monetary terms Feni’s art is valued less in South Africa, despite this perpetual drive and brouhaha every time his work appears to be “returning home.”

A 1985 drawing of a head sold at a Strauss & Co Auction for R96 000. The works that turn up at local auctions tend to be black and white drawings, some of which were produced before he left South Africa.

He had a foot in the international scene around the time he was leaving SA. In 1967, five of Feni’s works were selected for the Sao Paolo Biennale. His work was exhibited in London and the US. 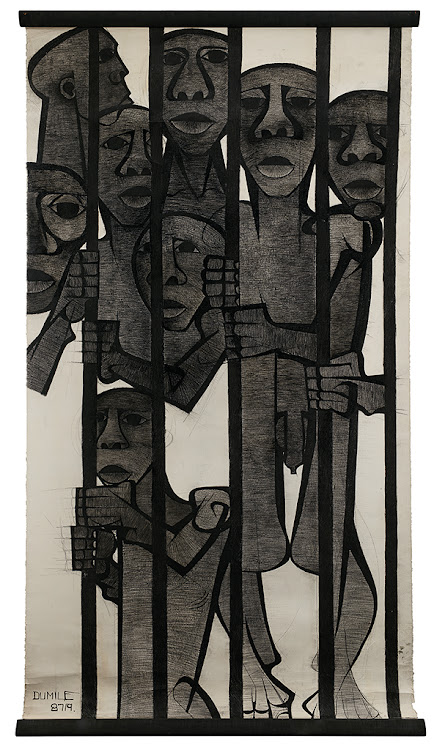 Children under Apartheid was produced for a campaign against child abuse. A group of male subjects cling to the thick vertical bars alluding to a prison. It is a compelling Feni; it boasts his typical economical lines describing the human figures. It hung in the building in New York from 1986 to 1989. Feni then further arranged for the works (there was a companion drawing) to be shown at other American universities, according to MJ Darroll from the Aspire Auction house. Feni showed his art in London and New York, but did not flourish financially.  Albie Sachs found him living in squalor, when he visited him: “Dumile had a difficult life. He slept on a mattress in a half-dark room with breathtaking black and white sketches of naked musicians against the bleak walls. He made beautiful clay models but could not scrape together the money to cast them in bronze. The last twelve years of Feni’s life, which he spent in America, principally in New York, were especially difficult. For a year he slept in underground tube stations and “lived in his own imaginary world,” recalled Sachs.

In this way whatever international success he enjoyed did not elevate him during his lifetime. In this sense perhaps he does suit the “neglected artist” tag that is attached to his work and that of by other black artists whose work will go under the hammer at Aspire auction – such as Peter Clarke’s Figures on a path, Tesselaarsdal (1960) and Louis Maqhubela’s Flight (1967). Maqhubela also lived in exile, though it was self imposed. “At the end of the 1960s, life in South Africa had become extremely intolerable,” he recalled in an email to Marilyn Martin, the curator of his 2010 retrospective, which made reference to his separation from his homeland – Vigil of Departure.

She eschews the ‘neglected’ label.

“There will always be neglected traditions and artists – fashion changes and the market is fickle; this applies to all artists, not only those we pigeon-hole as “neglected”.”

The term lacks credibility given Feni, Maqhubela and Clarke have all been the subject of major retrospectives, with publications devoted to their work, she adds.

“They are indeed valued and have been for a long time.”

The “neglected” term now seems to be linked to an undervaluing in numbers by the local SA art buyers. In the late eighties the term was popularised by an exhibition at the Joburg Art Gallery dubbed, “the Neglected tradition”, featuring work of black (and white) artists who were known to the art world but had never enjoyed promotion by the state’s institutions.

When white artists, curators and art world leaders such as Alan Crump, Christopher Till and Steven Sack turned their attention to “neglected artists”, MJ Darroll expected that works by black artists from this era would be collected more assiduously.

“I kept waiting for it to happen. We are 24 years on and there has not been much collecting. This is partially due to the fact that we don’t have an African Art Museum,” she observes.

Perhaps then, when we talk about Feni’s return, what we really ought to think about is a reinstatement or a form of recognition of the value of his art, aesthetic and contribution to the struggle against the apartheid system, which the tortured, haunted faces and bodies in his art are said to evoke.

As it happens, Children of Apartheid, has been in the country for the last three years, according to Darroll.

“It has been in storage. It has not been seen or been exhibited in the public sphere that will only be happening now.”

July 17th, the date of the Aspire Auction, will not only determine what value will now be attached to that Feni work, but also its home, away from the deferred home that Feni never attained in his life.

Feni’s work will go under the hammer on June 17 at Aspire’s Winter Auction and will be on view at 7 on Park, Hyde Park, Joburg. For more information about the auction and other Feni works visit: www.aspire.net