In Covid-19 couture, what lies between tracksuits and corporate wear?

Virgil Abloh reflects on BLM and black identity for Louis Vuitton SS2021 in an industry saturated by sweatpants, collaborations and SB Dunks 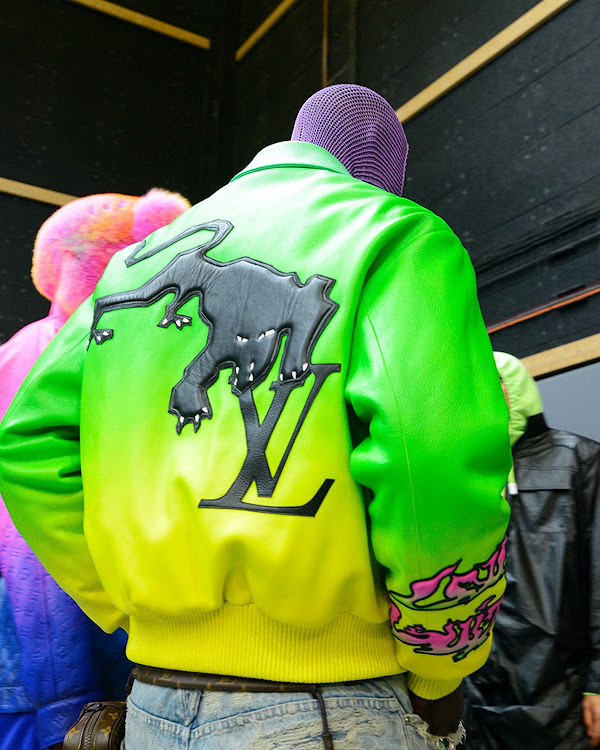 Covid-19 caught all of us unawares: one minute I was stressing about the best autumn outfits for my postcolonial literature class and the next minute I was worried about the different shades of grey in my sweatsuits. Formal wear was out, dressy nights out were gone, the office closed, Mad Men and Suits were only on TV. Fashion was denigrated to online shopping binges, trips to the grocery store and the Kardashian’s pandemic getaways.

Joburg has just been pushed into another lockdown, lunches and nights out are no longer an option, so is it worth it dressing up to impress a partner, roommate or pet?

The entire fashion industry was disrupted, factories were closed, storefronts abandoned due to the mass migration to digital stores and clothing sales fell as consumers stayed home and realised they didn’t need the current 52 fashion cycles. Purchases became more discerned, the environmental impact held in higher acclaim, sustainable practices and labour policies more important than a nostalgic graphic on a Bangladeshi-factory-shop 50% cotton tee. This has provoked a new, and long time coming, movement called “circulatory”, meaning that items and materials are kept in the system for longer, whether they are resold, repurposed or recycled, meaning tonnes of textiles are kept out of landfills or dumped in developing countries countries.

In the small respite we had before the Delta variant popped up on our shores, pandemic dressing had fallen into two categories, up or down; dressing to impress or for comfort. The dystopian-chic of hypebeasts, Matthew M William’s Alyx line and Givenchy, and Virgil Abloh’s direction of Louis Vuitton, have crowded our social media feeds; chains, clasps, suits and sneakers in a Mad Max world dominate the dressing up party. Athleisure, comfortwear and slippers have dominated the other side, Emily Oberg’s luxury sweatshirt, sweat pant and sweat-apparel line, Sporty & Rich has catapulted her from Kith to Comfort-Couture-stardom. Riccardi Tisci of Burberry reimagined the runway as a domineering claustrophobic forest with brand-heavy designs of muted tones, layers and complimentary colours while Dior went in a more lighthearted direction, focusing on splashes of colour, bring tie-dye back and focusing on optimism rather than loneliness and melancholy. While fast fashion giants such as H&M and Zara have release line upon line of muted tracksuits, vintage varsity hoodies and stay-at-home essentials.

Sneakers have seen the Nike SB dunk blast off Travis Scott’s feet into highest bids of Stock X; another colourway release a week has seen the storefronts of Shelflife and Archive turn into Covid-19-hotspots. With seemingly every university in the US represented with a colour scheme, one can only wonder why the architect-cum-DJ, Virgil, is releasing another 50 unimaginative “updates” to the silhouette. The New Balance 990 range and 574 models continued to be worn by dads in Ohio and supermodels all over but got eclipsed over the recent autumn by the reissued 550 and collaborations with Aimé Leon Dore.

Collaborations have dominated everything, Gucci and North Face reimagined our lust for exploration and adventure, or puffer jackets outside yet-another sneaker raffle, BRAINDEAD and Reebok partnered up for a isolation ready Beatnik slipper/sneaker/Birkenstock hybrid while Keith Haring has continued to dominate fast fashion tees, sneakers and everything in-between. 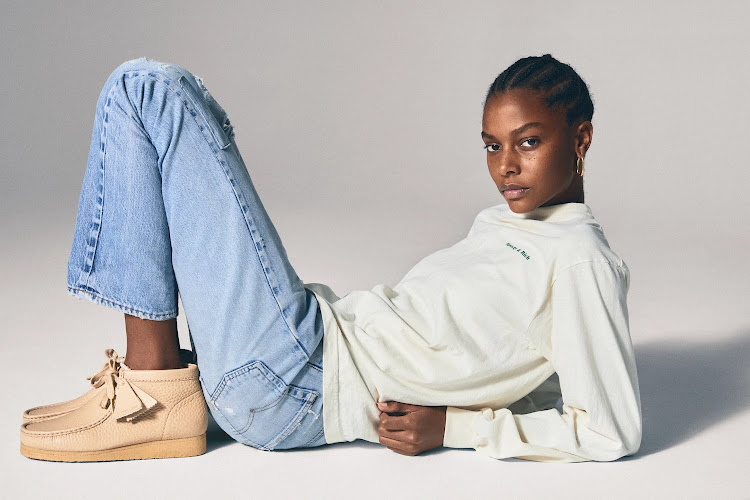 Abloh, with 50 dunks on his plate already, seems to be trolling with his new release of Air Force 1s by Louis Vuitton in their Spring/Summer 2021 show. With LV motifs and designs off the stress of Camden Market or stalls of the Oriental Plaza. Branding still hasn’t had its day; the logo-intensity of Supreme is still reigning as brands from sportswear to the catwalk keep releasing graphic tees, social media ready flexes and OOTD that look like a fashion editorial.

However, Abloh’s role as creative director of LV blurs the lines of haute couture, satire, innovation and great design. His recent menswear show was a multilayered, multidisciplinary display of the changes, innovations and progress within the pandemic. Titled Amen Break, a metaphor and reference to the Amen Break drum break by the funk and soul group, The Winstons, which became the most sampled drum break ever. The black artists were never compensated and eventually their identity, their credit and their genre was lost as their sample grew a life on its own. The Runway introduced a short-film, with the same title as the collection, starring the likes of RZA, GZA, Lupe Fiasco and Saul Williams, an allusion to the embedding, dissemination and erasure of revolutionary black music and creatives in the mainstream. A metaphor that goes much deeper than just music samples, Abloh elaborates to Vogue, “When it comes to the nuance of Black culture and design, how does it show up? How does that become canonised? I stand in a very privileged position to be able to educate on that.”

The Black Lives Matter movement reached a flashpoint as the pandemic did; discussions on media representation and treatment of people of colour were widely spread, widely reported and widely influential. It’s only suitable that an African-American creative, at the helm of an influential and historical European fashion house, references the changes in narrative, the revolutions brewing and the identity politics restructuring norms. The references to black representation and influence moves past the film onto the runway, the global fashion influence of Hip Hop, tracksuits, sneakers and basketball can all be attributed to black communities in the US and yet it is uncredited and looked down upon until people of privilege appropriate it. The collection leverages black culture and fashion with the sartorial canon of formal wear, an elitist, gatekeeper establishment. 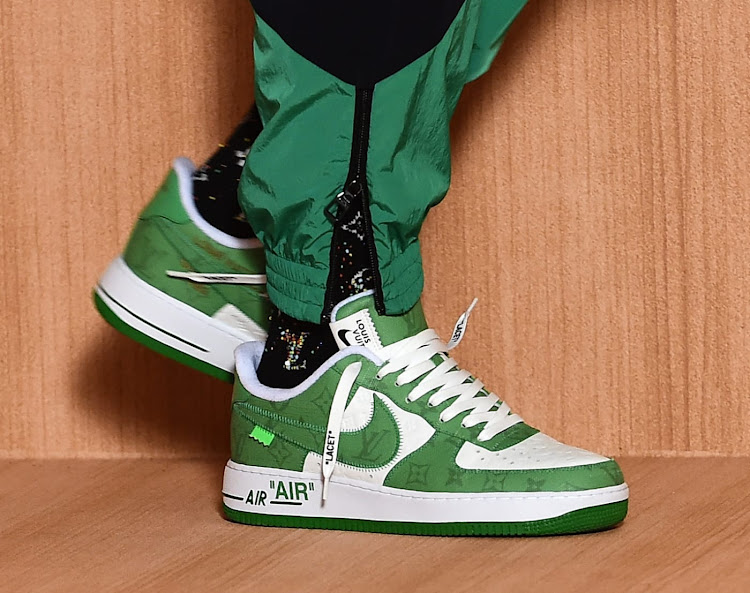 He said to Vogue, “I try to create the world as I would like to see it in real life. Having something that’s pop culture and fashion, that’s an education and maybe opens minds.” Abloh’s show and line elevates black culture and music by creating a new narrative of reappropriation and the celebration of subcultures. One blatant reference to pan-African ideology and striking in its stylistic delivery, is a vintage shaped leather jacket in hues of poisonous green and yellow; a black panther stalks across the back into a gothic LV logo. Hip Hop, black militancy and black ideology are fused into a stunning statement piece.

Amen Break becomes an allegory about the façade of ownership but also how black people and black creatives are often omitted once it reaches the mainstream; Virgil gives poetry and depth to his intersection of streetwear and couture. 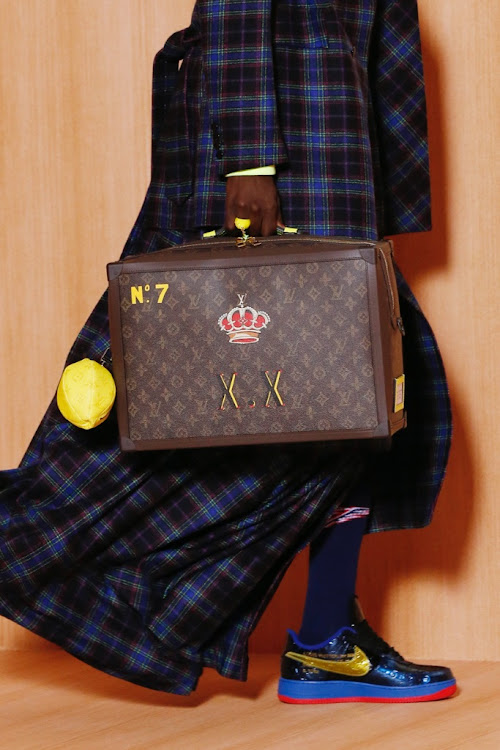 Abloh doesn’t move on from the pandemic either, as brands and collections shy away from the not-so-distant present, he introduces face mask, coverings and balaclavas. Bringing the debonair to the new normal.

The pseudo-bootleg LV AF1s are absolutely eclipsed by the chess-inspired costumery of suits, tracksuits, headwear and accessories; all which are seamlessly fused in LV’s ode to sampling and appropriation. “The game of chess, as it relates to life. This idea of two entities that always battle in a strategic way. Also, how the same pieces are divided by colour on the board, that makes them inherently at odds,” he clarifies to Vogue.

The entire collection, as varied and contrasting as it is, would not be out of place at a cosmopolitan disco like the infamous Studio 54; where radicals like Basquiat and Warhol danced the night away with the upper-echelons of fashion, Halston, Lagerfeld and Valentino. The tracksuits, tailoring and costumes take you to raves and discos of the 70s and 80s, Parisian balls of the early 20th century and New York luncheons of the late 90s; all with contemporary historical depth and context of course.

The pandemic has changed the fashion industry forever; our consumption of media and clothing has gained some much needed depth and nuance, and Virgil Abloh’s new collection encapsulates this growth, trauma and identity-crises that we have all suffered through.

Fine & Dandy: It's time to let your inner gentleman take an outward bow

Let our latest fashion editorial inspire you to ditch those 'daytime pajamas' and serve up some old-school, Oscar-Wilde-style glam
Fashion & Grooming
1 year ago

Managing director tells us how it's putting its money where its morals are, with a focus on sustainability and putting eco-friendly ideas into ...
Fashion & Grooming
1 year ago

The much anticipated Yeezy Gap's first product will only be available to shoppers in the fourth quarter
Fashion & Grooming
1 year ago
Next Article
© Wanted 2022 - If you would like to reproduce this article please email us.