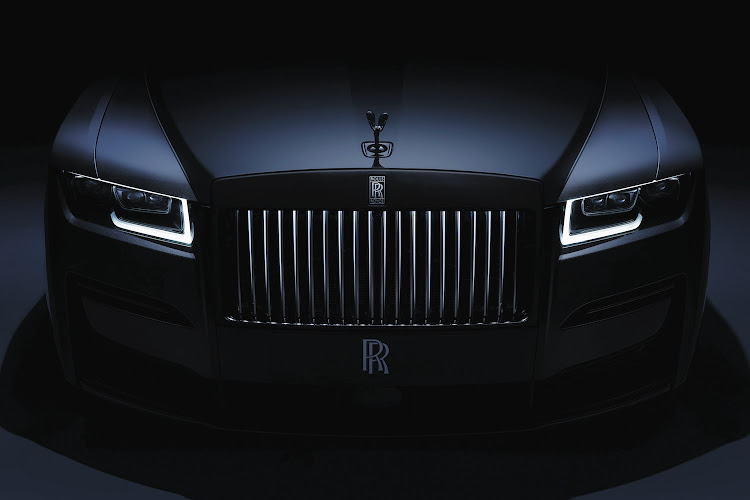 While Luke Skywalker never crossed to the dark side, Rolls-Royce has eagerly embraced it with its Black Badge series. This is the British luxury brand’s darker, edgier persona, which replaces traditional chrome trimmings with Darth Vader’s favourite colour. Torsten Müller-Ötvös, the CEO of Rolls-Royce Motor Cars, describes Black Badge as being darker in aesthetic, more urgent in personality, and more dramatic in material treatment. It is aimed at high rollers who are disrupters and risk takers, with nearly a third of Rolls-Royce customers opting for these dark-themed cars.

Black Badge made its debut with the Wraith and Ghost in 2016, followed by the Dawn in 2017 and the Cullinan in 2019. Now, the new-generation Ghost has adopted the treatment a year after its launch. It has arrived in the Joburg showroom of local importer Daytona, and, as usual, the price is on application.

Rolls-Royce sales soared by 49% to a record high in 2021, despite the global pandemic, as demand for luxury vehicles surged worldwide. Premium-car sales have grown in key global markets such as China and the US, where pandemic travel restrictions have left wealthy consumers with more disposable income. Rolls-Royce’s growth has been driven principally by the Ghost.

Sublime Porsche GT4 will have you drinking the Kool-Aid

There’s just one major problem: buying it. Although Porsche hasn’t limited production, this will be a low-volume car
Cars, boats & planes
3 months ago

But what exactly makes this noir version different? For starters, you don’t have to pick any colour as long as it’s black, to quote Henry Ford. Clients are free to select any of Rolls-Royce’s 44 000 “ready-to-wear” colours or create their own bespoke hue. However, most customers who request this darker expression of the Ghost stick to the signature black, says Rolls-Royce.

The car is coated in 45kg of paint, giving it that high-gloss piano finish. The Spirit of Ecstasy mascot and pantheon grille are also darkened, and, as in the standard Ghost, the grille is illuminated with 152 LED lights. The dark exterior theme is finished off with bespoke 21-inch composite wheels with 44 layers of carbon fibre.

The Ghost’s “post-opulent” design philosophy... is defined by authenticity and material substance

Inside, materials retain the Ghost’s “post-opulent” design philosophy, which is defined by authenticity and material substance rather than overt statement. The Black-Badge treatment has a moodier ambience, with darkened surfaces, including a black-faced clock and a dashboard with a diamond-pattern weave in carbon and metallic fibres. The air vents are darkened with a non-tarnishing physical vapour-deposition technique to replace the chrome.

Customers can opt for the Technical Fibre “Waterfall” section of the individual rear seats in the Black-Badge family motif — the mathematical symbol that represents potential infinity, known as a lemniscate. Made of aerospace-grade aluminium, the symbol is applied between layers of tinted lacquer to look as though it is floating above the veneer on the lid of the champagne cooler. The illuminated fascia on the passenger side of the dashboard displays an ethereal glowing lemniscate surrounded by more than 850 twinkling stars, echoing the subtle sparkle of the Shooting Star starlight-ceiling headliner. And all of this can be adapted to personal taste, with colourful contrasting trim available for the seats, doors, and dashboard. 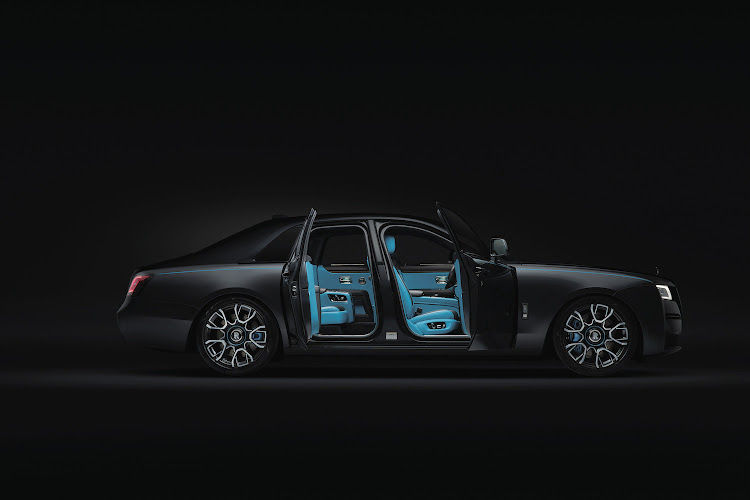 The Ghost Black Badge gets a shot of extra grunt, with an additional 21kW and 50Nm coaxed from the twin-turbo 6.75l V12 engine for total outputs of 441kW and 900Nm. And a new exhaust system makes a subtly deeper sound.

The chassis is upgraded with larger air springs to reduce body roll in hard cornering, but without affecting the typical magic-carpet ride in gentler direction changes. The Ghost’s silky ride is made possible by the innovative planar suspension, which uses a separate damper unit with the air suspension to reduce vibrations over all kinds of bumps. Power is laid down via all-wheel drive and four-wheel steering. Transmission duty is performed by an eight-speed automatic with a “Low” mode — the Rolls equivalent of Sport — which increases gearshift speeds by 50%.

Incidentally, if you want a petrol-powered Rolls-Royce in your garage, you’re running out of time, as Rolls-Royce has committed to going all electric by 2030. Its first electric car, the Spectre, will be brought to market by the fourth quarter of 2023.

It's all in the zeros...
Voices
3 months ago