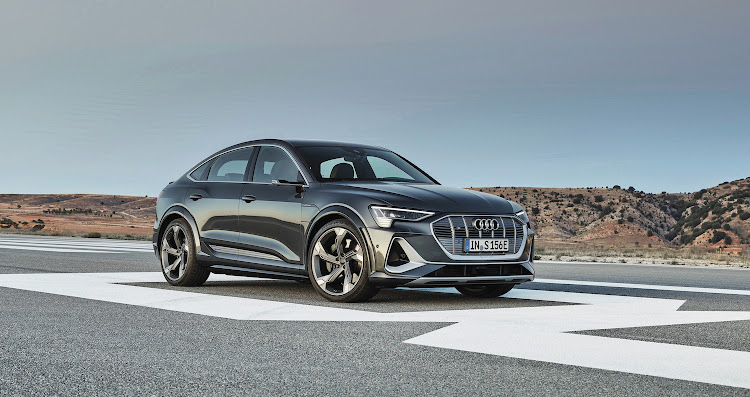 Call it the electric-vehicle (EV) revolution or the big plug-in, but the move to battery-powered cars truly gained momentum in 2021. Like many other brands, Audi announced it would be phasing out the internal combustion engine in pursuit of a cleaner planet, and declared that by 2026 every new Audi launched on the global market would be all-electric. Locally, Audi is backing up the plan by launching its range of battery-powered E-trons.

The model I drove was the E-tron S Sportback quattro SUV, which is priced at R2 425 000. If you’re familiar with Audis you’ll know Sportback refers to a curvaceous body style with an athletic, coupé-like profile. It looks more sporting than a regular SUV without impinging on practicality, as there’s sufficient rear head room under the fastback roof. The spacious cabin comfortably accommodates a quartet of tall adults, and this luxury SUV has an elevated ride height for that all-important “command” seating position and pavement-clambering ability.

Whereas German cars usually offer a raft of extra-cost optional features, this E-tron comes comprehensively equipped straight out of the box, with features such as four-zone climate control, electric front seats with heating, Matrix LED lights, and a comfort key with sensor-controlled bootlid release. The cabin serves up Audi’s typical premium flair, and red leather seats with diamond stitching added a colourful flourish to the test car. Physical buttons are largely replaced by touch screens in the heavily digitised cockpit, and though it makes for a pleasingly hi-tech look I wasn’t a fan of the haptic feedback controls. They require a harder press than regular icons and sometimes it took two or three jabs to get a reaction.

The E-Tron S Sportback is quite high on Audi’s EV totem pole in terms of power. Its three electric motors combine to produce 320kW and 808Nm. In launch-control mode the outputs are raised to 370kW and 973Nm to enable a sportscar-like 4.5 second 0-100km/h sprint, with top speed electronically governed at 210km/h. The car rushes forward with silent but violent urgency. Without any gears to shift there are no steps or pauses in the power delivery; just a satisfyingly seamless surge of pace. And while the absence of a roar to accompany hard-throttle driving is rather jarring, like watching an action movie with the sound off, it’s something we’ll have to get used to in this new EV age. A high-voltage battery gives the Sportback a range of up to 452km depending on driving conditions, but the range dips considerably if you exploit all that power with an enthusiastic right foot.

The time-honoured quattro system has followed Audi into the electric age, and in addition to the electric all-wheel drive, torque vectoring provides active and fully variable torque distribution on the rear axle. There’s no shortage of grip, and the car doesn’t turn tail-happy if you boot the throttle out of a tight corner, despite all that instant power. Adaptive suspension can be set to various firmness levels in the Drive Select system, and the car glides with impressive smoothness in the comfort setting. EVs are in their infancy and it will take some time for them to become affordable cars for the masses. But for well-heeled early adopters, cars such as the Audi E-Tron provide swift and silent performance with good practicality and a decent range. Not to mention eye-catching styling.

Customers can reserve their electric Audi at one of 10 E-tron dealerships, with three outlets in Johannesburg, three in Pretoria, and two each in Cape Town and Durban. All these dealers will be equipped with DC fast-chargers of up to 75kW, which will be accessible to the public. If required, Audi will cover the installation of a 32-amp industrial socket up to the value of R5 000 at your home. This will allow for the integration of single-phase power (the most widely available power available in South African households) and the Audi E-tron charger, to deliver around 7.2kW of power towards a full charge in around 13 hours. Audi SA has partnered with Gridcars to allow E-tron customers access to the public charging network of more than 280 universal charge-point connectors.

The latest version of the Italian brand’s iconic MC12 might not be as loud or as rare as its predecessor, but it sure is fun
Cars, boats & planes
3 months ago

The Festival Automobile International looks beyond practical or performance aspects to highlight the passion for cars
Cars, boats & planes
3 months ago