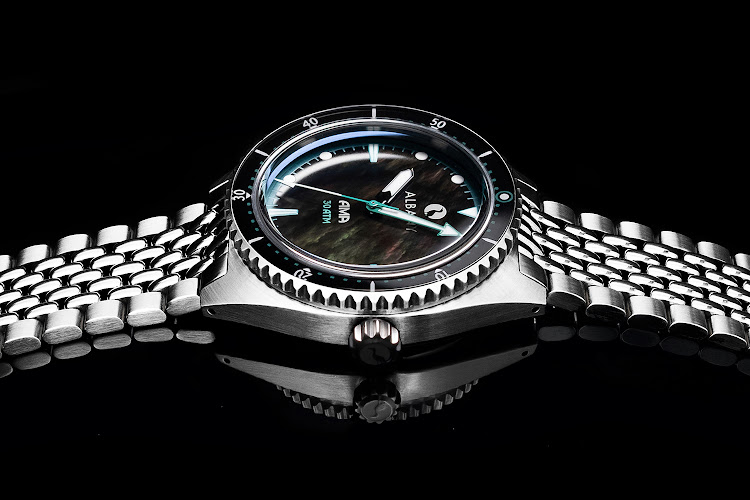 For fishermen, the cormorant is a talisman for a bountiful catch. For South African actor and surfer Brett Williams — Raised by Wolves (2020), Deep State (2019) and Outlander (2017) — the cormorant brought good fortune for his recently launched Albany watch microbrand when pledges rolled in, far exceeding the fundraising goals of his Kickstarter campaign in under an hour.

“The cormorant has always been a good luck symbol for me because I surf a lot and they’re always around me when I’m on my adventures,” says Williams of the corvus marinus that graces his Albany mark in silhouette, and which will also be a continuous reminder of this success story.

A good narrative is just as essential these days as fine craftsmanship, and adventure stories are at the heart of Albany, the first SA-designed mechanical wristwatches. Made to an impressively high standard, the brand is inspired by his father’s “Camel Man” spirit of wanderlust. The name honours the small, rough, former whaling station on the west coast of Australia, where Williams senior grew up and most of his adventures played out. Adventures that would later inform the new watchmaking tale of Albany.

“Every single watch will be inspired by lesser-known adventurers,” says Williams. The first is a line-up of 60s-style divers watches celebrating the AMA female pearl free-divers of Japan. “Future collections will be lead by stories of a crazy Dane, a blind British explorer, and two German pilots who crash-landed in Australia.”

The philosophy of the microbrand movement embraces quality, affordability and inclusivity over exclusivity. Apart from their movements, Albany watches are designed entirely by Williams who reveals a passion for design and making with meticulous care: something that will resonate with the mindset of the microbrand enthusiast. He is not just the face of the brand but has been hands-on from the get-go, from original prototyping to finding the most highly regarded OEM custom watch maker suited to carrying out the job. 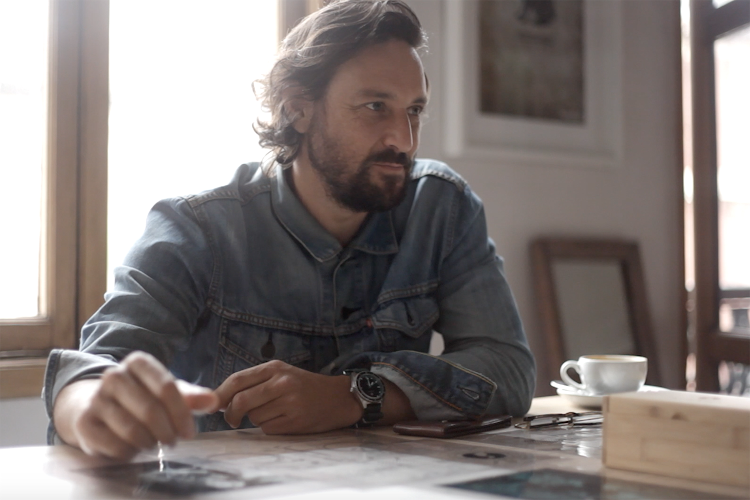 “I’m an artist and an actor, but I’ve built motorcycles from scratch. I’m redoing a muscle car and wasn’t happy with the suspension so I redesigned the suspension. I’ve always loved watches and started to get into them a few years back and wanted to start collecting. But why collect when I can make?,” he says, when I ask of his decision to embark on this mission back in 2017. “It’s a passion, more than being an enthusiast. It’s the joy of seeing your creation come to life.”

His interest in watches started with a late-60s gold Omega Seamaster, a gift from his dad. Among his current collection are an early Steinhart and a Seiko “Turtle”, but what might have influenced his AMA? “I’m a fan of paired down minimalism but in order for things to work they need to be balanced,” he says of his approach to design. While I see hints of a Blancpain Fifty Fathoms Bathyscaphe in its clean design and slim bezel, Williams says he was very specific about not copying other designs. However, he does say that the bezel on the AMA has a two degree inward slope similar to that of the concave bezel on one of his favourite watches, a Gruen Ocean Chief from the 50s.

Williams goes on to explain that everything about these new pieces is inspired by the free-divers and the Japanese coastline, from the teeth on the bezel to the endearing harpoon second hand, and the colour palette. On the screw-down case back is an engraving of an AMA diver, which is an impressively executed rendition of a portrait taken by photographer Iwase Yoshiyuki in the 1950s. 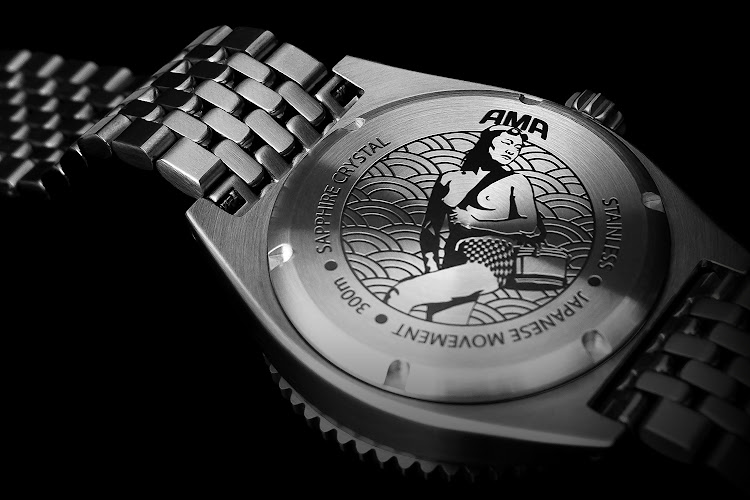 On the case back is an engraving of an AMA diver — a rendition of a portrait taken by photographer Iwase Yoshiyuki.
Image: Supplied

Time for a test dive, a lovely “Bathys Blue” fume dial version on brushed stainless steel beads-of-rice bracelet is accompanying me on a road trip up the East Coast this week. I’ve yet to take the AMA for a deep dive — they are water resistant to 300m — but I have worn it during many a leisurely dip in the warmer India Ocean. Legibility is key for a diver, and while the two-tone teal outer track is subtle, the whole dial really ignites as sunlight kisses the wrist. It also doesn’t require much to ignite the Super-LumiNova on the hands, indices and crown in lower light.

The uncluttered, numerals-free display is protected by an anti-reflective domed scratch-resistant sapphire crystal. The Black Pearl AMA with its black-green mother-of-pearl dial is my choice for most dramatic effect. There is also the Night Dive Edition with black PVD case. 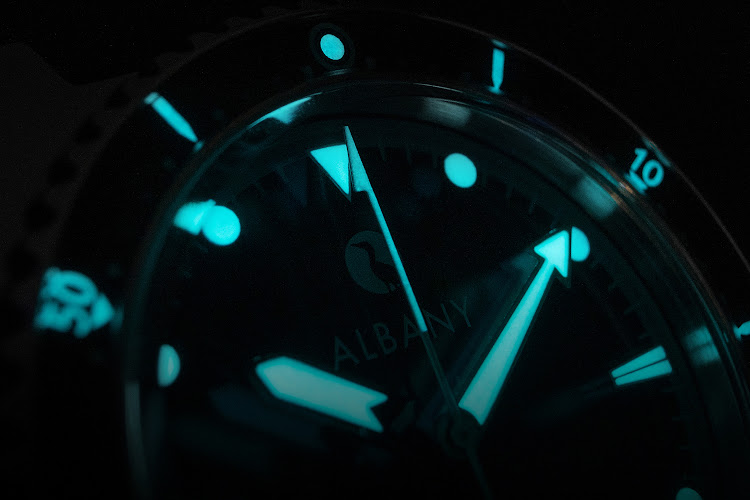 The AMA feels solid but wears comfortably on the wrist, and attention to detail is on a par with many established affordable-luxe brands. The 40mm case is machined from top quality, brushed 316L stainless steel and features drilled lugs — apparently a small detail obsession of the microbrand community — for easy strap changes on quick-release spring bars between the snug steel bracelet or Italian nubuck leather options. The 41.5mm unidirectional bezel is extremely precise and locks in place like a pro. This Japanese-inspired watch is powered by the highly regarded Miyota 9039 automatic movement.

Luxury timepieces are intrinsically eco-friendly by nature of their meticulous crafting and longevity. Added to this, Albany watches come in multipurpose bamboo boxes and all NATO straps are made from a regenerated nylon eco-weave. The unpacking experience is wonderful and each watch comes wrapped in a waxed canvas roll lined with micro suede. 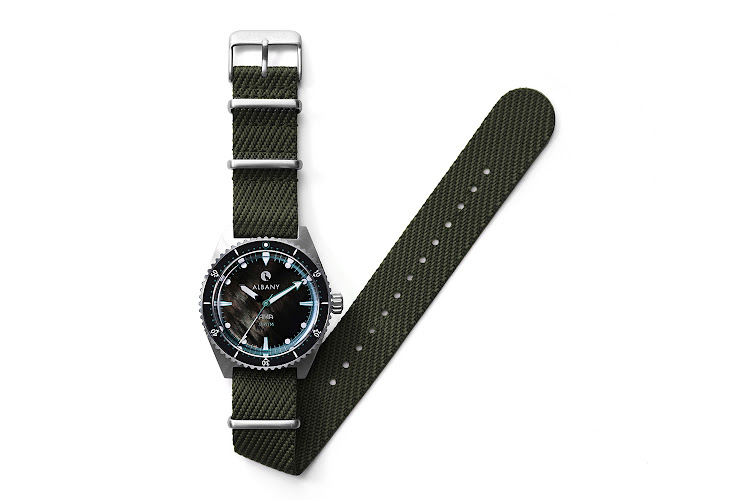 • The “signature series” on a Nato strap starts at $299. Visit Kickstarter for other options and launch prices.

Swapping out plastic for organic, biodegradable materials, Swatch is the latest watchmaker to clean up its act
Watches & Jewellery
1 year ago

Featuring an off-centre second time zone display, this is Rolex's most complicated timepiece and is the perfect watch to keep tabs while you dream ...
Watches & Jewellery
1 year ago
Next Article
© Wanted 2022 - If you would like to reproduce this article please email us.