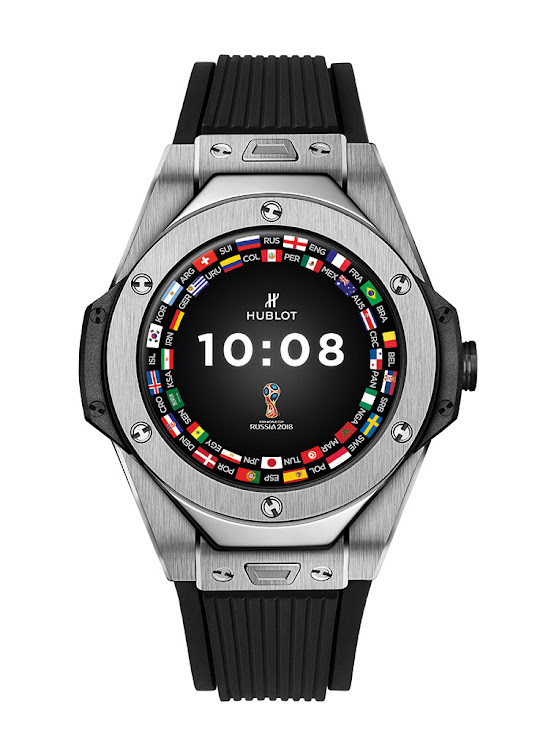 On 14 June, host team Russia will play Saudi Arabia in the opening match of the 21st Soccer World Cup in the Luzhniki Stadium in the capital, Moscow. South Africans know all too well what a momentous occasion this is, having hosted the World Cup in 2010. Die-hard fans and newcomers alike from around the globe will once again be avid participants in the celebration of the beautiful game. All eyes will be on the ball, whether the viewer is in one of the 12 stadiums in Russia, on a couch at home, or in the local pubs, cafes, and sports bars.

Appropriately, the official timekeeping partner for the 64 games is the attention-grabbing luxury watchmaker Hublot, which joins its Swiss counterparts in the wearable tech segment with the 49mm Big Bang Referee 2018 Fifa World Cup Russia.

I’m part of the Jomo (joy of missing out) movement, but I’ll be keeping an eye on favourites Brazil. When it comes to smart watches I’m generally disconnected, unless, of course, like FitBit, they serve a particular purpose. This timepiece — limited to an edition of 2018 — certainly rises to the occasion, with functionality specially designed to aid referees by connecting them to goal-line technology, which determines if the ball has completely crossed the goal line.

Hublot is also part of LVMH, so it worked with the same Intel and Google teams as Tag Heuer, and the Referee shares most of the hardware from the Tag Heuer Connected. The watch also announces the kick-off time 15 minutes before a match and displays the word “goal” and vibrates when a player scores. It can also display a range of match statistics during a game, including the score, number of cards, names of goal-scorers, player substitutions, and match time.

There are 32 different “fan” dial options inspired by the national flags of participating teams, plus two neutral dials available in analogue and digital aesthetic. The Referee is compatible with phones operating Android 4.4+ and iOS 9+.

On the outside, this latest addition to the Big Bang collection — first launched in 2005 — has some noticeable updates to the constantly evolving porthole case design. Although its polished and satin-finished titanium case stays true to the original silhouette, with distinguishable trademark features such as the H-screws on the bezel, the Referee is slightly thicker to accommodate all the tech and battery. To keep things symmetrical it has Kevlar inserts left and right and a matching polished titanium plate extending top and bottom.

Its patented interchangeable “One Click” strap system makes changes quick and easy. There are additional straps available to match every team dial displayed on its super sharp 35.4mm Amoled touchscreen, but the Referee is sold with a cuff strap in sponge with the 2018 Fifa World Cup emblem and that of Hublot, and a black-lined natural rubber strap.

Longines celebrates sporting elegance for men and women at Roland-Garros

SPONSORED | Longines is the official timekeeper at Roland-Garros. Stylish new watch designs for men and women have been unveiled to mark the occasion
Watches & Jewellery
3 years ago

To celebrate each Olympic occasion, Omega releases a limited collection of timepieces. This year's Winter Olympic Games has inspired the Seamaster ...
Watches & Jewellery
3 years ago

A pedigree of champions, Tag Heuer pays homage to racing legend Steve McQueen with their latest collaboration
Fashion & Grooming
3 years ago
Next Article
© Wanted 2021 - If you would like to reproduce this article please email us.