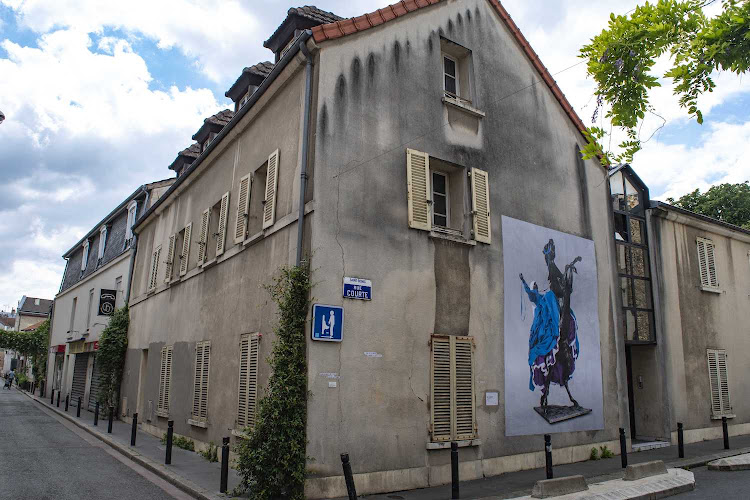 Riason Naidoo is a curator and writer working on modern and contemporary African art and has been based in Paris for the last four years. In 2016, he was awarded the Chevalier de l’ordre des Arts et des Lettres (Knight of the Order of Arts and Letters) from the French ministry of culture.

Neuf-3 is a public art project in the cosmopolitan suburb of Saint Denis on the edge of the French capital. As curator, Naidoo created the concept, sourced the funding, selected and invited the artists, chose the artworks and finally realised the project, which was inaugurated on July 16. He was assisted by the French Institute of SA, and numerous other partners including the artist residency Le 6b — which handled most of the administration — the city of Saint-Denis, Musée du quai Branly — Jacques Chirac, Heinrich Böll Stiftung (Cape Town), Christie's (Paris), the Paul Eluard museum of art and history (Saint-Denis) and the Center for the Study of Slavery and Justice (Brown University, US).

Naidoo specialises in contemporary African art (he is also doing his PhD on the subject) and his critically acclaimed curation flourishes on the streets of Saint-Denis, a socially engaged public art project aimed at the people living there. In his opening speech, Naidoo said: “I really wanted the project to be installed before the summer holidays (August) so that the citizens and children of Saint-Denis could enjoy the works. At the centre of this project is the diverse population of Saint-Denis, with a particular focus on its African population.”

Socially distanced relationships, and coping mechanisms are unpacked through a metaphorical data dump in Studio Nxumalo’s intimate ‘A Cloud’ ...
Art & Design
5 months ago

How did you conceptualise neuf-3?

I took the train to Saint-Denis for the first time in September 2019 to meet Le 6b, who wanted to talk to me about a drawing exhibition at their space. On the RER train from Paris (Châtelet-les-Halles) to Saint-Denis, I was pleasantly surprised to see a very diverse population, completely different from central Paris. There was an unmistakably African presence, especially from North and West Africa.

I wasn’t convinced about the idea of the drawing exhibition in a small space in Le 6b appealing to a select group of people (as I work on contemporary African art) and two months later I conceptualised a proposal for neuf-3 and convinced Le 6b to accompany me on the project. It is a socially engaged project, inspired by a one I curated in Cape Town in 2016, entitled Any Given Sunday, yet different at the same time, and very much focused on the local context of Saint-Denis, the socioeconomic issues, the politics, and taking into context the history of Africans in Paris.

Many of the suburb’s citizens don’t frequent the elite museums of Paris, so the idea is to take art to the people. I selected work by African artists (with one exception) with a particular focus on the content — and aesthetics of course — but looking at issues of representation, memory, history that would engage the residents of Saint-Denis. There are more than 100 nationalities in the Parisian suburb, so it is very cosmopolitan; the atmosphere is also more informal and relaxed than Paris. I also moved to Saint-Denis in December last year to live in the suburb to realise the project. 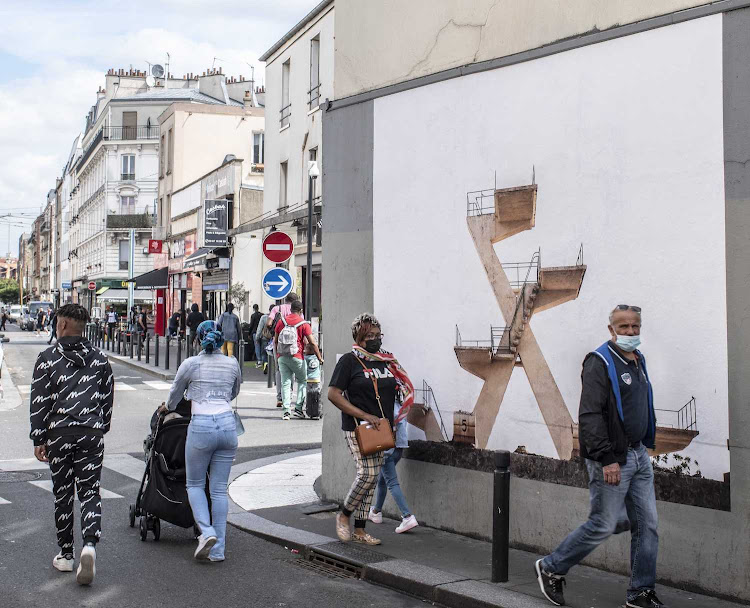 It is not very easy for African curators in Europe to raise funds for independent projects such as these. I contacted each partner and artist myself and it took almost two years from neuf-3’s conception to its realisation. The project also had support from the city of Saint-Denis’s mayor’s office and department of culture, which has been essential to secure permission for the sites:  government buildings, private properties and businesses where the artworks are displayed. The city also supported many other aspects of the project, for which I am very grateful. They loved the idea of the art focusing on the people of the suburb.

Due to the Covid-19 situation, many artists were unable to travel and as such there is a focus on visual art in the public space. Installing public art is very rewarding due to the spontaneous response from the public. When we installed Samuel Fosso’s self-portraits — entitled ‘African Spirits’ from 2008 — in which he portrays himself in disguise as iconic African leaders, we had such an enthusiastic reaction from the public that day that it slowed us down and delayed our production. The curiosity, and response of those who have come into contact with the artworks has been heart warming and very rewarding.

How does contemporary African art speak to such a diverse community?

There are 13 artists participating representing the suburb of Saint-Denis itself: Nigeria, Algeria, Central African Republic, Ivory Coast, Zimbabwe, SA, Cameroon, Senegal and France. The diverse contexts and representations of the artists and artworks also reflect on the cosmopolitan nature of the suburb. 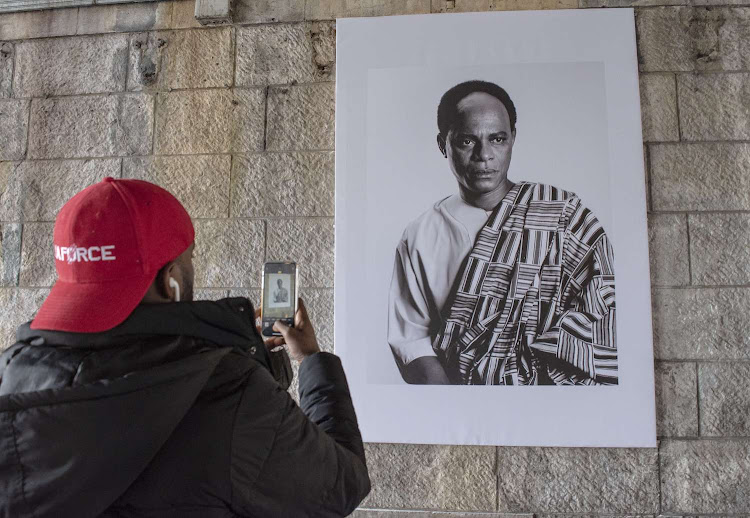 As a suburb with a high percentage of African immigrants, or those of African origin — from the African continent, from the Caribbean, from the diaspora and from France and Europe — the idea is that these artworks by African artists would speak more directly to the African citizens of Saint-Denis, recalling the swimming pools from Bamako or Abidjan in the 1960s (François-Xavier Gbré), or family memories from family photo albums such as weddings (Kudzanai-Violet Hwami), or the realities of black, working-class culture in SA (Lebohang Kganye), or iconic African heroes (Samuel Fosso and William Kentridge), or the nostalgic days of independence-era cinema architecture (Cheikh Ndiaye), or reimagining the role of black women (Mary Sibande), or the rights and politics of representation of Algerian women (Dalila Dalléas Bouzar), or issues of immigration and discrimination affecting Africans in Europe (Barthélémy Toguo), to name only a few. You can see how artworks relating to these issues may relate to the experiences of the local African communities living in Saint-Denis.

What to look out for

All the artworks were carefully selected, depending on their relevance to the public of Saint-Denis. For example one work of Kentridge is a portrait of Frantz Fanon (2016) in Indian ink on found pages, which really resonates with the residents, due to Fanon being lauded as an African hero. 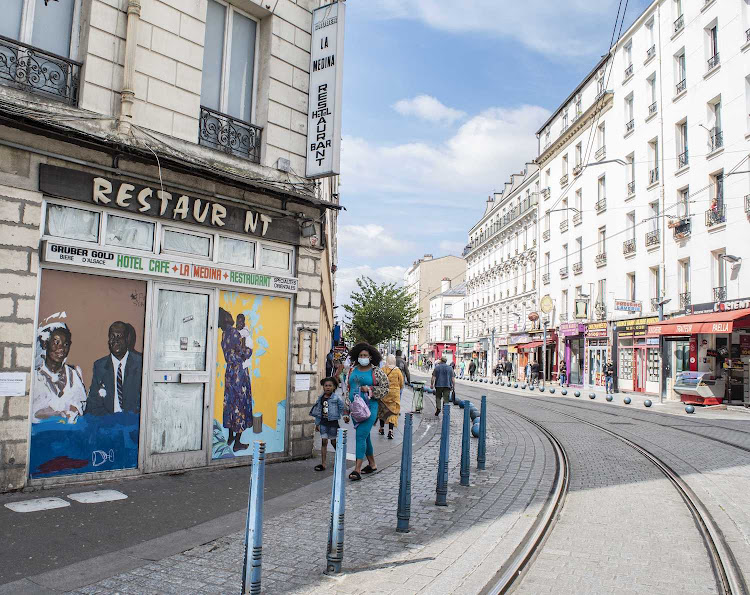 Lamyne M’s photographic self-portraits are striking as it has resonance with some of the 19th century paintings in the prominent Basilica Cathedral of Saint Denis, a renowned architectural site in Europe and the inspiration for the even more famous Notre-Dame in Paris. “The Reign” (2010) by Mary Sibande, signals a personal full circle for me, as I was director of the SA National Gallery (2009-2015) when we purchased this sculpture for the museum, and now we are using a photo of it in neuf-3.

Neuf-3 is a public art exhibit in Saint-Denis, on the edge of Paris, and is running until the end of the European Summer, conditions permitting.

Covid-19 restrictions and curtailed tourism may have dampened Cape Town’s art scene, but it’s still rich and spread across the entire city
Art & Design
5 months ago

In this month’s column, we explore local artists who find their inspiration in the human form, in all of its unique and complex fragility
Art & Design
6 months ago
Next Article
© Wanted 2022 - If you would like to reproduce this article please email us.