Few South African artists have created as much academic discourse as Esther Mahlangu and her signature bold, graphic abstractions. Her 1991 BMW art car commission remains an iconic moment in the history of South African art and is presently the poster child and centrepiece for South Africa: The Art of a Nation at London's British Museum (October 27 2016 to February 26 2017).

Previously art cars had been reserved as prestigious “boys’ toys” for the usual suspects: Andy Warhol, Robert Rauschenberg, Roy Lichtenstein, Frank Stella, David Hockney, and, more recently, Jeff Koons. Mahlangu was not only the first woman to be added to that list, she was, and remains, the only African. Mahlangu has now, for the second time, joined forces with BMW. This time her “canvas” was a BMW 7-Series, on display for the first time at the 2016 Frieze Art Fair in London.

When Art Car 12, 1991 was unveiled, South Africa was poised at the edge of a globalised market. At the time, the cultural boycott was still in full swing. Prior to South Africa’s “coming out”, there was an entire forgotten generation of South African artists who experienced the worst of cultural isolation during apartheid, and were written out of the picture.

One whiff of the scent of freedom when Nelson Mandela was released in 1990 and all the luxury brands began clamouring to access Africa's richest market. BMW, however, had long since openly operated in the country, and the art car project inadvertently smoothed over a sleek transition from an old Zuid-Afrika luxury brand to a new rainbow-nation version.

Mahlangu has a tiny frame, her neck stretched long and regal by rows of copper and brass chokers; metal rings encase her lower arms and legs along with chunky beaded bracelets and anklets. She wears a beaded goatskin cape or linaga, and a five-fingered ijogolo apron with beaded Isigolwana rings and a blanket wrapped shawl-like around her chest. Her hair is cropped short, as is the tradition for amaNdebele women.

We take a first look at a major installation by Robin Rhode, featured artist at this year’s FNB Joburg Art Fair
Art & Design
3 years ago

Mahlangu speaks Ndebele and Afrikaans, and is clearly comfortable with being on view. Between 1980 and 1991, she was a resident at the Botshabelo Historical Village, an open-air museum which presents Ndebele culture to visitors. “Their appearance is as striking and eye-catching as their works of art,” according to the South African tourism website. These “historical villages” were first opened by the Transvaal Provincial Museum Services to promote tourism internationally, as well as to present the nationalist government’s apartheid policy as being successful.

According to art historian Annette Loubser, “There were other women in this traditional cultural village, but Esther was noticed by tourists and future patrons. She was clearly talented, different. Her dignity and passion have held her together despite attempts at commodification.”

Painting as a modern, commercially determined practice hardly existed in Ndebele culture before the 1990s. Until then, Ndebele women in the area were primarily bead workers, who made Ndebele crafts. Esther Mahlangu pioneered the artistic transference of Ndebele designs, then virtually exclusively reserved for wall paintings, onto canvas. Tradition and commercialism frequently collide in Mahlangu's narrative: her transfer of works onto canvas came from her exposure to foreign tourists. She is an artist who adapted her art to meet new market trends and audiences. 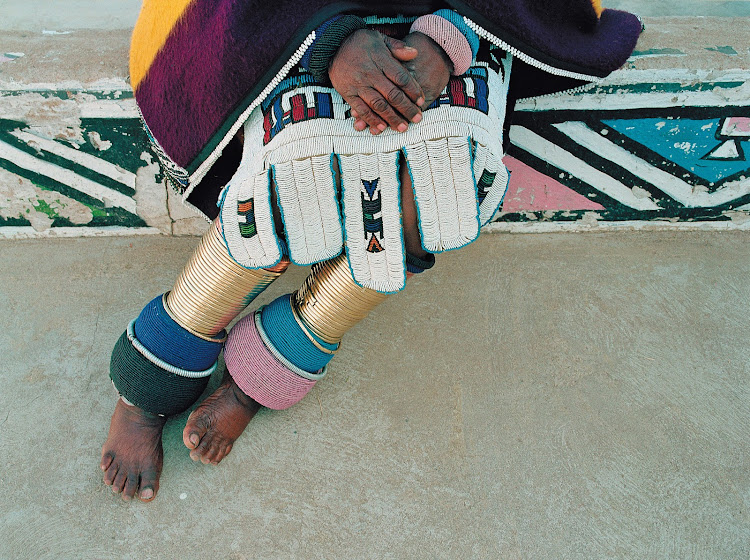 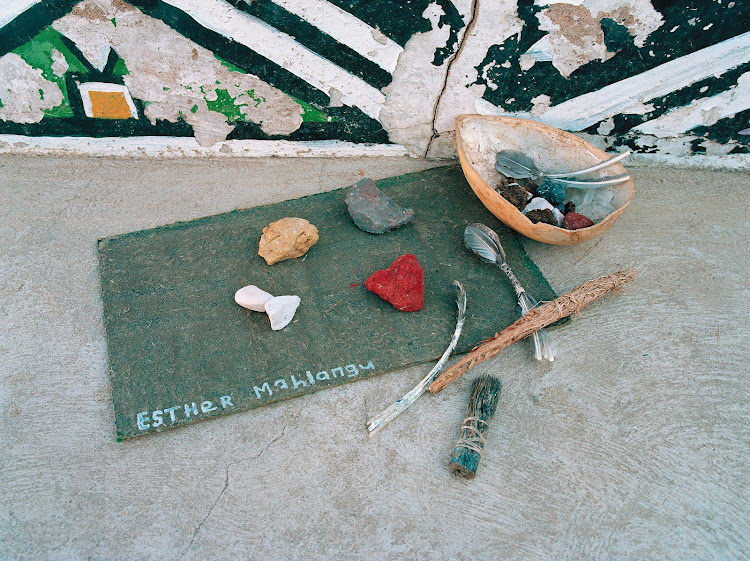 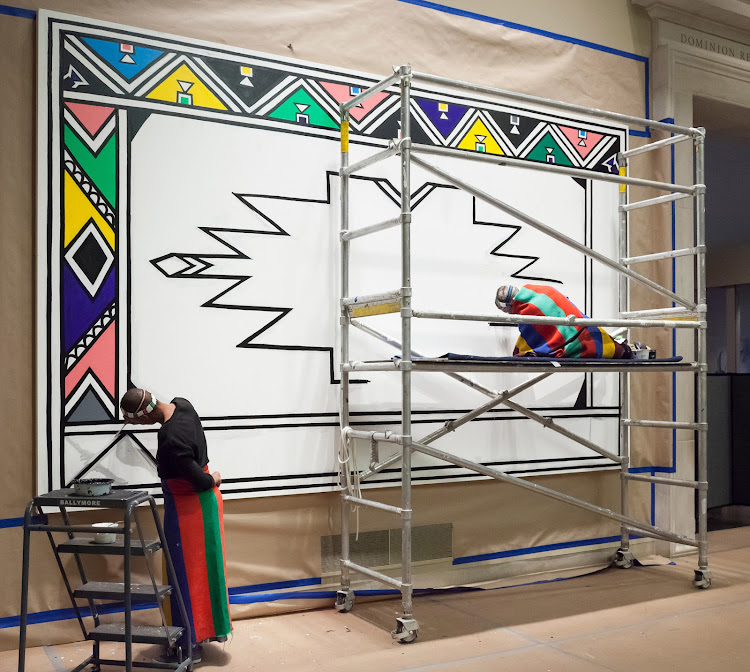 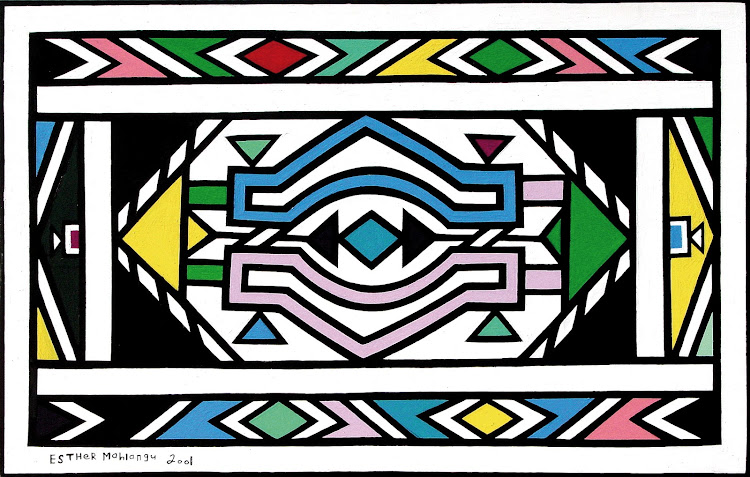 Before 1940, the Ndebele made use of natural materials from their immediate surroundings to construct their homes. Walls were built from sun-hardened mud bricks and wall paintings were coloured with natural pigments. Wet balls of clay were stored, and when needed, reconstituted, mixed with cow dung, and then used like thick paint for wall decoration. Decorative painting was done without brushes, by hand.

Wall painting as a sign of identity and ownership emerged in the 1940s. Colour (acrylic) paint manufacture on an industrial level began in South Africa in 1945.

The art fair is a platform for the development of art, growing business opportunities for the industry and positioning Johannesburg as a contemporary ...
Art & Design
3 years ago

Esther Nikwambi Mahlangu (NaGiyana Nostokana) was born in 1935 on a farm near Middelburg, Mpumalanga. She learned mural painting from her mother and grandmother. By 1945, at 10 years old, she was already painting in the custom called ukugwala — the wall painting of the outside of one’s home. Although she had no daughters of her own, by teaching many in her community, Mahlangu has achieved her stated goal: as a catalyst for the continuation of Ndebele culture.

Limited-edition footwear collections, skateboards, and branded sneakers, have all recently been on the drawing board for the 81-year old (who does not drive and seldom wears shoes). Mahlangu may only drink hot water, but all the same she's just done a highly visible collaboration with musicians John Legend and Usher for Belvedere Vodka. In the age of social media, Mahlangu, BMW, and Belvedere are getting a lot of mileage out of it.

Artist Peter Clarke once said: “Esther Mahlangu's colourful exploration and defining of space and spaces has taken her name a great distance.”

Beside the main road into Mabhoko in the KwaMahlangu district of Mpumalanga, there is a brightly painted billboard that reads, “Esther is here”. The French translation, “Esther est ici”, is also included.  Below, it states: “The 1st woman who visited oversea” and capitalised, far larger, “ART WOMAN”.

Image: Zwelethu Mthethwa
Next Article
© Wanted 2021 - If you would like to reproduce this article please email us.

Five décor and design trends to inspire your living ...