In this second collaboration, the American artist blends his interpretation of a mandala in the Classic Fusion Chronograph Shepard Fairey 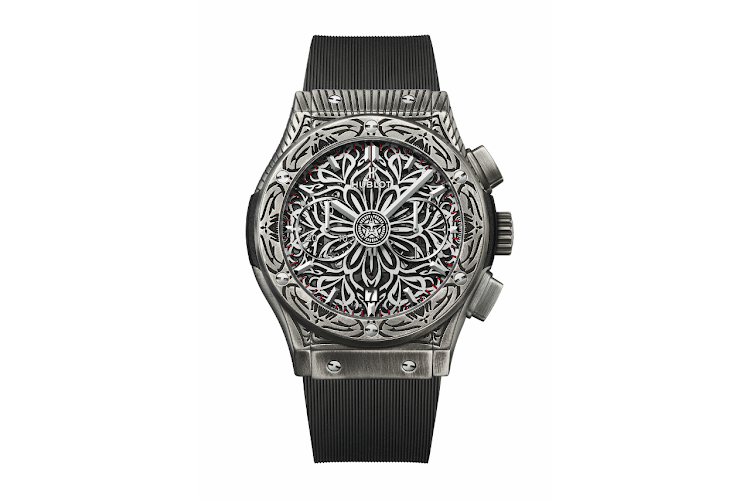 The relationship between the worlds of art and luxury isn’t anything new, but it has become ubiquitous in recent years as contemporary artists are commissioned to bring fresh energy to heritage brands. In the world of luxury watch brands, Hublot is a relative newcomer, yet has attracted attention worthy of its younger, rebel star status. At Hublot, a collaboration is a much deeper engagement than the mere customisation that is so often the norm. The artist is given full autonomy to create; just short of redesigning the watch movement. This bravado and daring is captured in the name of its most famous collection, the Big Bang, and expresses the art of bold design statements and revolutionary movements and materials synonymous with the manufacture.

Incidentally, it was Hublot that in 2009 became one of the very first companies to equip its timepieces with the WISeKey blockchain-based authentication system, something that is only now on everyone else’s agenda. The Big Bang chronograph, launched in 2005, might get all of the attention but it was the company’s first watch in 1980 that established the brand as a house of innovation. That porthole-shaped gold piece featured the luxury watch industry’s first natural rubber strap.

The Classic Fusion collection reinterprets the elegance of that first watch and is relatively understated in the world of Hublot. The unique, pared-back styling of this collection presents the perfect starting point or canvas for collaborations, which first began in 2017 with the skeletonised Classic Fusion Aerofusion Chronograph Orlinski. It features a faceted titanium case designed by French artist Richard Orlinski, mimi-cking the style of his iconic sculptures. This relationship continues in two new 40mm Classic Fusion Orlinski editions for 2021, in monochrome “flashy blue” and “gloss black” ceramic.Also part of the “Hublot Loves Art” programme, earlier this year Japanese contemporary artist Takashi Murakami interpreted his familiar, smiling-flower emblem in black diamonds with a dynamic, 3D effect for the Classic Fusion Takashi Murakami All Black timepiece — see full review here.

For 2021, Hublot also presents the 45mm Classic Fusion Chronograph Shepard Fairey in titanium as its second collaboration with the American artist. Well timed, this sculpture for the wrist “symbolises the natural cycles of life and the unity between different cultures” through Fairey’s interpretation of a mandala.

The painter, graphic designer, DJ, illustrator, street artist, skateboarder, and founder of OBEY Clothing is also said to be one of the most politically influential artists of his generation. His more recent work includes the famous Obama Hope poster from former president Barack Obama’s electoral campaign in 2008, and Liberté, égalité, fraternité, which he created as a symbol of hope for France after the 2015 terrorist attacks. His work is included in the permanent collections of, among others, the Smithsonian in Washington DC, MoMA in New York, and the Victoria and Albert Museum in London.

Fairey’s mandala pattern is brushed and engraved on the titanium case, bezel and dial, which has been finely cut to expose the self-winding calibre HUB1155 chronograph movement with a power reserve of 42 hours. At the centre, the hands feature the artist’s signature “Star Gear” mark.

The watch comes on a lined black rubber strap. Available as a limited edition of 50, at just under R500 000 each, this timepiece will also help to raise funds for Amnesty International.

Can a luxury watch bring enlightenment? I guess that’s not the point here, but for those who appreciate fine art and craftsmanship, it certainly presents much to muse over. Says Fairey: “I wanted to integrate the art of the mandala into the piece as, for me, this evokes the connection between the inner self and the outer world. A powerful concept to consider when looking at a watch and thinking about time.” A powerful consideration for all of us right here, right now.

Time for something totally unique