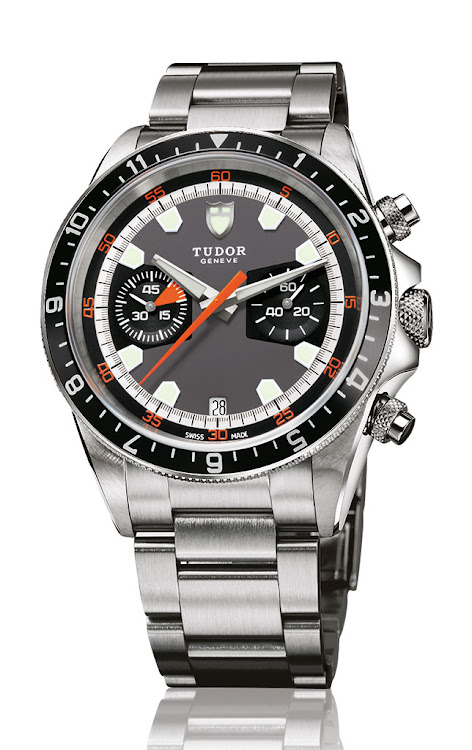 This year Tudor celebrates the 50th anniversary of its first chronograph. Called the Oysterdate, it was sporty, robust, and utilitarian while offering some unique ’70s flair. While the brand already acknowledges this timepiece through the Heritage Chrono collection, first launched in 2010, we are eager to see what it has up its sleeves in celebration of this special year. Powered by a selfwinding calibre 2892 mechanical movement with additional mechanism for chronograph function, the 42mm Heritage Chrono, priced from around series) but adopts key aesthetic elements of the original.

That first chronograph was powered by a Valjoux 7734 mechanical movement and got its nickname in reference to its unusual pentagonal shaped hour markers, which resembled the home plate on a baseball field. Its unusual, symmetrical dial design was available in grey or black with orange second markers and chronograph seconds hand. Two bezel options were also offered with a tachymetric scale — one in Plexiglas (ref 7031), the other finished in satin-brushed steel (ref 7032) — reminding us of the racetracks that inspired chronographs R65,000, is a slightly bigger, modern interpretation of the 39mm Oysterdate “Homeplate” (7000 in the first place. A third prototype (ref 7033), although never commercially available, had a bidirectional rotating bezel with a 12-hour marked black disc in aluminium. This style was adopted for the Heritage Chrono collection and alluded to the brand’s diving heritage.

Incidentally, this version also had useful GMT functionality, with its rotating bezel facilitating second-time-zone tracking. The 2013 Heritage Chrono Blue was inspired by the second generation (7100 series) with its signature blue launched in 1971, and dubbed the “Montecarlo” because of its roulette wheel-style dials.

Introduced in 1976, the Tudor “Big Block” (series 9400) was its first self-winding chronograph, earning its nickname for its thicker case designed to accommodate the rotor of its new movement. The asymmetrical dial layout was influenced by the new Valjoux calibre 7750 movement, which saw the addition of an hour counter, three subdials shifting left, and a big date aperture at 3 o’clock.

Tudor broke with tradition in 2013 to show off its technical abilities through the fashionable, matte-black, hi-tech ceramic Fastrider Black Shield, however, one of my favourite releases is still the 41mm Tudor Black Bay Chrono S&G of 2019.

This gorgeous two-tone update on the 2017 stainless-steel model combines the diving identity of the Black Bay with its characteristic “snowflake” hand and the functionality of a purist’s chronograph for the racetrack.

This timepiece resembles a double helix, which symbolises “evolution, growth and resilience”
Watches & Jewellery
2 years ago