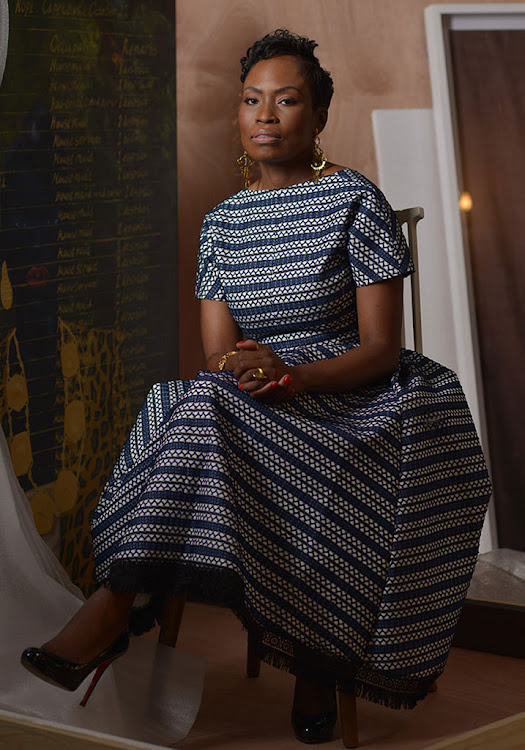 In the 1970s, British film critic Laura Mulvey coined the phrase “the male gaze”, describing the way in which the visual arts and literature depicted the world and women from a masculine point of view. When it comes to black women, feminist author and activist bell hooks complicated this gaze by including white men, white women, and black men.

It’s a perspective that still prevails, and has inspired art collector, attorney, and entrepreneur Pulane Tshabalala Kingston to make a conscious decision to mainly collect the works of female artists. She believes that it is time for an intentional focus on female artists if the art world wants to be seen to be appreciating the work of men and women in equal measure, as their work is just as competent and compelling.

The figures say it all. According to Britain’s Tate Gallery, 51% of visual artists today are women, yet 78% percent of the galleries represent more men than women.

At most art galleries in South Africa, the statistics are heavily skewed against female artists in terms of representation, which means that the opportunities for their work to be exhibited are rare.

Happily, Kingston’s crusade is not a solitary one. With more and more women taking up positions of influence in the art world in Africa and globally, there is a meaningful movement towards correcting the imbalance that dates back to the Renaissance.

Africa's women artists: the global gaze has shifted for a new generation
Voices
2 years ago

Kingston says the 1980s saw the emergence of the first female pioneers of contemporary South African art. It was the height of apartheid and one of the artists who played a crucial role in contemporary art was Cape Town-based Sue Williamson (her Messages from the Atlantic Passage, talking about slavery and the black body). Williamson’s silk-screened portraits, called A Few South Africans, made visible the history of women who were involved in the struggle for freedom. Her second important work, the book Resistance Art in South Africa, articulated these ideas.

Two years later came Jane Alexander with a sculpture work called The Butcher Boys that spoke about the traumatised body and the dehumanising forces of apartheid.

Kingston also identifies Patience on a Monument by Penny Siopis, which was produced in 1988 in response to the legislated state of emergency, as a crucial piece of contemporary art from this era.

There were black contemporary female artists during this time, but they remained in the margins by virtue of the politics of the day. The main theme of the work of Helen Sebidi is about our historic and current dislocated society and Ndebele artist Esther Mahlangu was part of one of the biggest exhibitions ever held in Paris, called The Magicians of the Earth, at the Centre Pompidou.

“Her work stopped being viewed as tribal art, but rather in the context of early modernism,” Kingston says.

These artists are openly challenging and staring down all the baggage that comes with patriarchy, misogyny, and colonialism

Another important female artist is Noria Mabasa, who was creating sculptures at a time when it was difficult for black women to make art in South Africa. There is also Bongi Dhlomo-Mautloa, whose role and contribution as an artist, curator, and organiser is rarely acknowledged. She charted areas that were not common for black women under apartheid by being active as an art student, later practising art, and then becoming a curator, organiser, and juror.

In the 1990s, female artists started creating work that focused on issues of gender and of identity. This was more of an in-your-face feminist movement that saw the work of multi-disciplinary artists Berni Searle and Tracy Rose engage on subjects that include gender and politics.

“These artists primarily came from the Cape and were struggling with issues of identity — what it meant to be coloured in a contemporary South African context,” says Kingston. At the same time, artists Lisa Brice, Candice Breitz, Diane Victor, and Deborah Bell were also attracting interest.

These were some of the female artists who laid the foundations for the new generation of women who Kingston says are succeeding in shifting the cultural gaze.

Kingston says it is no accident that a lot of art produced by female artists is in the form of performance art. “This comes of out a political history. In the past, women were always painted by men and this meant that their bodies were perceived in a particular way,” she says. “As part of regaining their power, they decided they were going to use their bodies to express their pain, their joy, and their beauty — and everything in-between.”

Few South African artists have created as much academic discourse as Esther Mahlangu and her signature bold, graphic abstractions
Art & Design
3 years ago

“This turning of the gaze is almost an act of defiance,” Kingston says. “It is a form of resistance that suggests that these artists are openly challenging and staring down all the baggage that comes with patriarchy, misogyny, and colonialism — and that one of the ways of doing this is through them reclaiming their bodies through the art of performance. And it works.”

Kingston says this era (the 1960s and beyond) has also witnessed the power of art collectives in South Africa. None of these collectives dealt specifically with black gendered issues until the emergence of the iQhiya collective, which grew out of a group of female UCT art students who saw their male counterparts disproportionately grabbing the attention of the art world. A group performance at the Greatmore Studios in Cape Town in 2016 made the art world sit up and take notice of this formidable female talent.

In addition to iQhiya challenging their marginalisation from the art establishment as well as claiming their own narrative to create opportunities for themselves in a male-dominated industry, Kingston says she also sees iQhiya as a collective that serves as a place where artists “find solidarity and acceptance, where strategies about how to get into the gallery space are discussed, and tactics are planned in a way that doesn’t make artists feel intimidated.”

Kingston describes the 21st century as an age of self-actualisation. “Black women artists are finding their voices and embracing who they are,” she says. “They deal with daily acts of violence, as well as intimacy, beauty, and pleasure. They are also focusing on marrying their resistance to the practices of oppression and abuse that they endure with the need for collective healing.”

African women are at the helm of two of the continent’s newest art fairs, both dedicated to connecting artists, collectors, and lovers of fine art
Voices
2 years ago

- From the September edition of Wanted.