If made right, this humble dish, is delish. Andrea Burgener gives her tips on how to make it just right 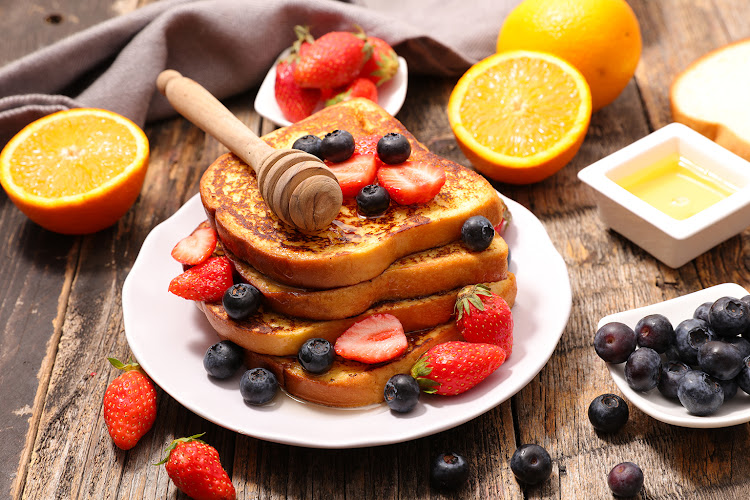 Did you know: The Romans were the first recorded "French" toasters
Image: 123RF / margouillat

You might think French toast is a trifling matter but I’d like to persuade you otherwise. The big thing with food (and life in general) right now is the extremely tricky act of Not Wasting. Most households have bread in them and much of it gets chucked out. This we know. So, a dish which uses leftover bread is a most magnificent thing. And it’s especially magical when its starting point is so humble.

French toast is certainly a modest sort of dish, being created from leftovers and all. Like French kissing, but unlike French knickers, it doesn’t actually owe its invention to the French. The Romans were the first recorded toasters. They tore bread into pieces before soaking it in a milk-egg mix, fried it in olive oil, and poured honey over it. Quite a posh Roman’s leftovers, really.

Apicius, who recorded the recipe, asks for further luxury in that the crusts should be cut off. Bit wasteful, eh? The French names pain perdu or “lost bread”, and the German arme ritter, the same as the English “poor knights”, point more to austerity and make-do. But nowadays the trend – doubtless fuelled by Instagram and bloggers – is towards eggy bread with very lofty ambitions, more in keeping with the Romans.

Indulgent additions and toppings are cool, sure, but going berserk in that department doesn’t help if the basics aren’t right. Follow my suggestions – okay draconian rules – and you might find it’s like eating the dish for the very first time.

First of all – obvious but usually ignored - the bread you use is the alpha and omega of things. In fact, making French toast is an object lesson in industrial versus real bread. There’s no way you can use industrial loaf here. The added gluten and improver, plus the whipped-in air, always reveal themselves when this kind of bread hits moisture. You’ll be making French mush, not French toast.  A properly made bread, with its strong structure and developed (though not added) gluten, doesn’t dissolve into gloop when soaked. And soaking is what’s needed.

That’s the second big thing. No “dip and go”, please. Never. The bread (which should be sliced thickly) must be left in the egg mix until soaked right through to the centre. I’m talking 10 minutes or more.

Third thing - the egg-milk mix. Only use full-cream milk; around 1 cup to three or four eggs. And if you’re making a sweet version, scenting the mix with cinnamon, nutmeg and vanilla is not the worst idea anyone ever had.

Fourth - and here I part with the Romans, pathetically fond as I am of them – fry in generous butter. Not oil and not margarine. And, no, “butter spread” is not butter, it’s pure evil.

Fry on a low heat until golden-brown and eat posthaste. Rolling in cinnamon-sugar while piping hot creates a French toast doughnut which is utter bliss.

Spreading the love for butter

We egg you on to make your own mayo

Waste not, want not: sustainable solutions for cooking

The top food trend right now involves the war on waste. South Africa’s first Michelin-starred chef, Jan Hendrik van der Westhuizen, brings us some ...
Food & Drink
4 years ago
Next Article
© Wanted 2022 - If you would like to reproduce this article please email us.