Decades after it’s first publication in Japan, the little-known photo documentary remains a ‘treasure of fashion insiders’ and a source of preppy men’s wear inspiration 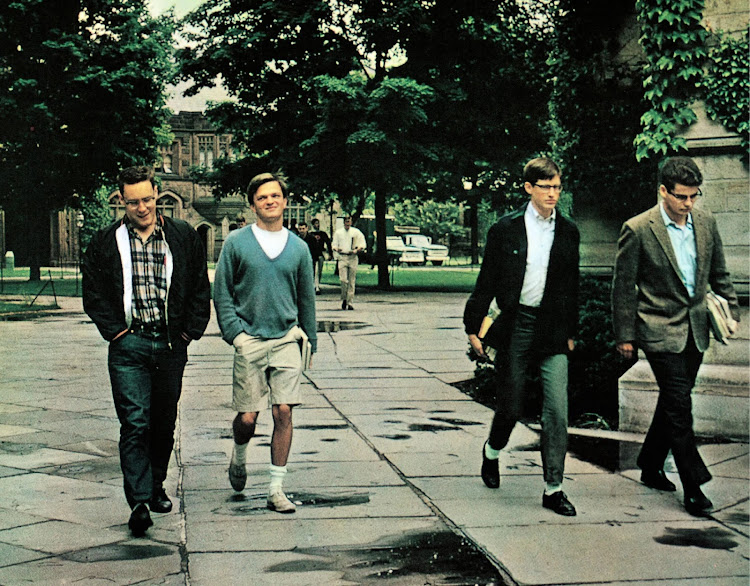 The caption for this Take Ivy photograph reads: “To classrooms. Each of these four Ivy Leaguers is dressed according to his own style. Together they represent what we hoped to find on our fact-finding trip: the epitome of daily dress for Ivy Leaguers.”
Image: Take Ivy by Teruyoshi Hayashida

My insatiable curiosity concerning history, anthropology and philosophy informs the foundation of my interest in men's wear. This may seem archaic, disconnected even, in light of the breakneck speed that fashion trends seem to be moving but pause for a moment, and you will notice that fashion at large is inextricably connected to the past.

This could not be truer when it comes to men’s wear. Consider for a moment what men generally wear — trousers, shirts, jackets and shoes. Broadly speaking, these items have not changed much since the 1800s in the western world. Indeed, colours, fabrics and silhouettes change with time and trends.

Formal tailoring has made way for casual individual expression. Advancements in fabric technology and industrialisation at scale have drastically reduced the cost of clothing production. Pants, shirts and jackets are offered baggier or slimmer silhouettes depending on the penchant of tastemakers, movers and shakers that drive popular culture.

Loved by celebrities from the Kennedy's to Michael Jackson, the loafer is as stylish today as when it was introduced in the early 1930s
Fashion & Grooming
3 months ago

I’m at my happiest paging through old magazines and books documenting the history and timeline of men's wear. Obscure books on how chinos came about? Yes, please! An article on why brogues have perforations? I’ll spend an hour joyfully down that rabbit hole. Among my favourite books is a little-known photo documentary called Take Ivy. It’s a book I refer to often for inspiration and an excellent snapshot into men's wear history. 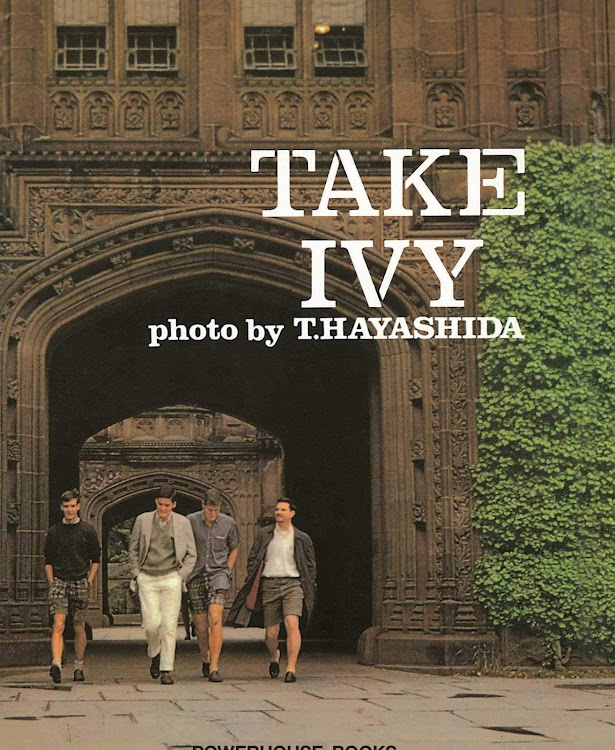 Described by The New York Times as “a treasure of fashion insiders”, Take Ivy is a photo book originally published in Japan in 1965, setting off an explosion of American-influenced “Ivy Style” fashion among students around the trendy Ginza shopping district of Tokyo. These days, Take Ivy is something of a collector’s item. The book has been translated for the first time from the original Japanese and has not been edited, lending it a quirky sense of language.

Thanks goes to the good folks at Powerhouse Books, who fulfilled every #men's wear geek’s dream and republished the book in 2010.

Ivy or Preppy style was popularised around the 50s at Ivy League universities along the northeastern coast of America, characterised by casual wear and driven by an emphasis on sports such as polo, golf, rugby, sailing and hunting. Ivy style was less structured than the previous, more traditional take on men’s clothing. The soft shoulders of jackets combined with bold madras check patterns sought to promulgate a more relaxed aesthetic.

Hayashida and his group of collegiate-style enthusiasts capture the various facets of campus life authentically as students go about their daily lives without the air of elitism that can be associated with preppy-inspired fashion. From “College Life” to “Elements of Ivy”, which encompass where the Ivy Leaguers shop, the book presents a well-rounded view of the preppy lifestyle. 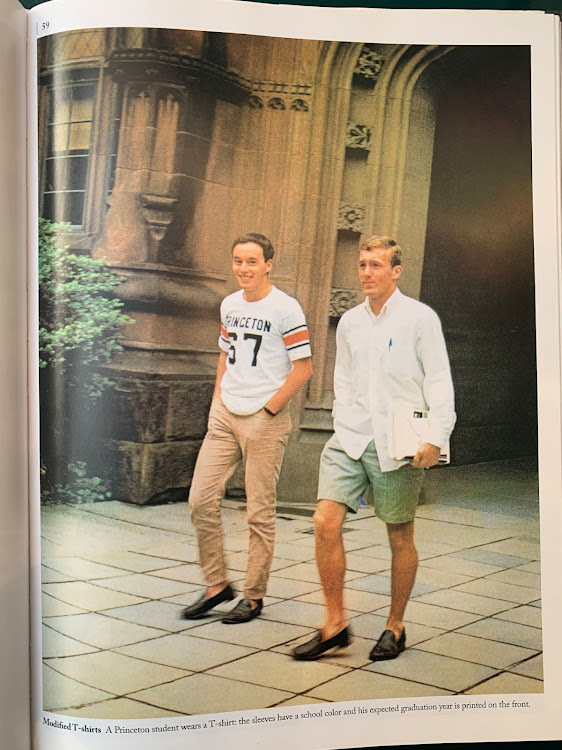 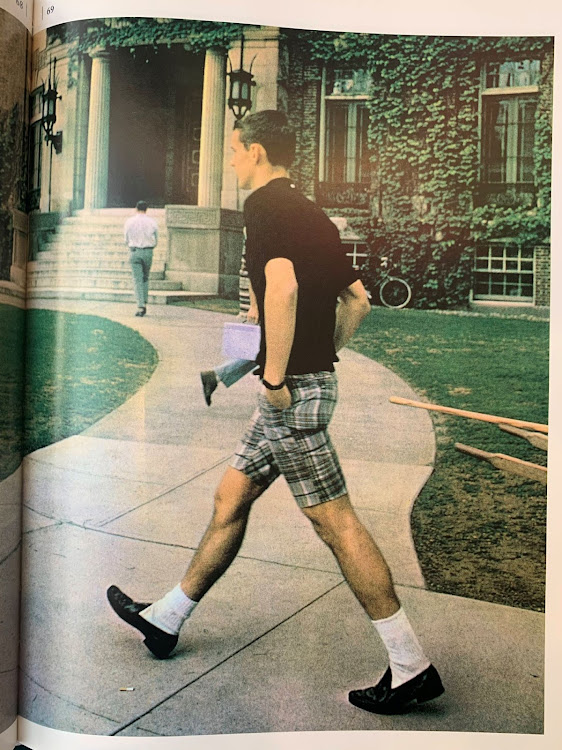 The mention of legendary outfitters — Brookes Brothers — is yet another nod to history and pioneers in men's wear. The fact that these pictures were snapped in the 60s, but the style is still relevant today provides definitive proof of the cyclic nature of fashion. Fantastic shots of classic loafers, rugby jerseys, parkas, madras check shorts, oxford shirts and chinos are as relevant today as they were when they were first introduced around the 50s. Ivy style has come and gone, but I’m sure we’ll see iterations down the road. 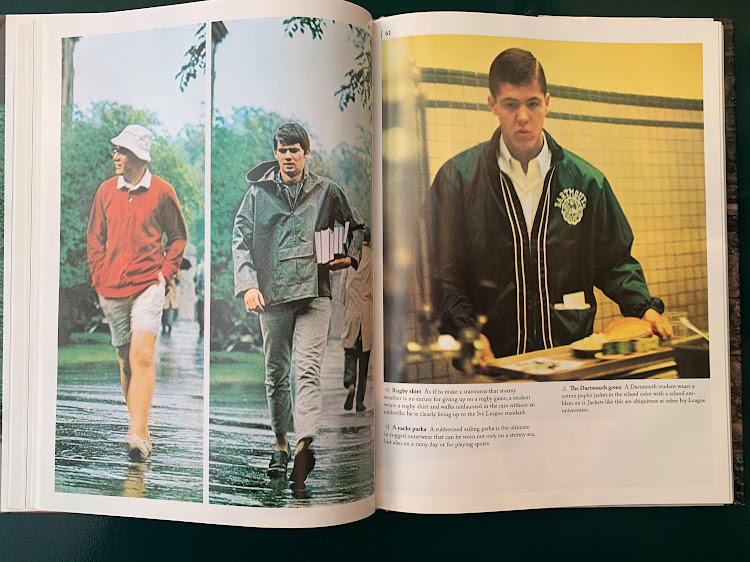 There is a scene in the movie The Devil Wears Prada where the antagonist Miranda Priestly, played by powerhouse Meryl Streep. delivers what can only be described as a monologue of epic proportion. She delivers a scathing response to Andy Sachs, played by Ann Hathaway, regarding the journey of a colour. Of course, it is dramatic and over the top, but I dare say there’s an ounce of truth in it.

Miranda Priestly: Where are the belts for this dress? Why is no-one ready?

Andy Sachs: (snickers under her breath)

Andy Sachs: No. No, no, nothing ... you know, it’s just that ... both those belts look exactly the same to me. Y’know, I’m still learning about this stuff, and uh... (giggles uncomfortably)

You ... go to your closet, and you select ... I don’t know, that lumpy blue sweater for instance, because you’re trying to tell the world that you take yourself too seriously to care about what you put on your back, but what you don’t know is that that sweater is not just blue, it’s not turquoise, it’s not lapis, it’s actually cerulean.

You’re also blithely unaware of the fact that, in 2002, Oscar de la Renta did a collection of cerulean gowns, and then I think it was Yves Saint Laurent — wasn't it? — who showed cerulean military jackets. I think we need a jacket here.

Miranda Priestly: And then cerulean quickly showed up in the collections of eight different designers. Then it filtered down through the department stores, and then trickled on down into some tragic casual corner where you, no doubt, fished it out of some clearance bin.

However, that blue represents millions of dollars of countless jobs, and it’s sort of comical how you think that you’ve made a choice that exempts you from the fashion industry, when in fact, you’re wearing a sweater that was selected for you by the people in this room ... from a pile of ‘stuff’.

Classic eyewear for the modern man

Whichever kind of man you are, there’s a shape for you
Fashion & Grooming
1 month ago

Excess is never stylish when it comes to fashion
Fashion & Grooming
1 month ago
Next Article
Commenting is subject to our house rules.
© Wanted 2022 - If you would like to reproduce this article please email us.