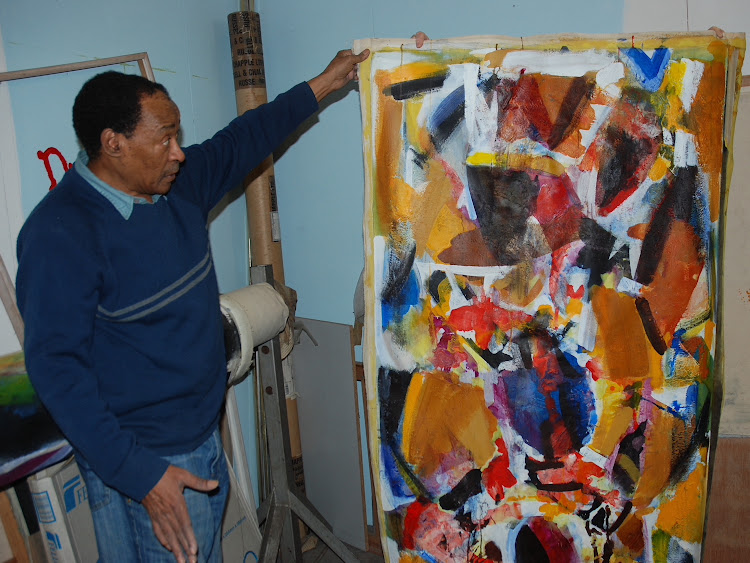 The artist in his studio in 2009 with an abstract canvas to be framed for the Standard Bank exhibition, photo by Clare Cooper, Art First.
Image: Supplied

Louis Khehla Maqhubela, one of the artists who shaped the sphere of black modernist art in SA, and his wife Tana Maqhubela, died recently of Covid-19 in London.

Maqhubela’s earliest work reflected township life, a theme prevalent in other artists’ work at the time, whose work was grounded in their lived experiences. His style developed over time and became characterised through abstract expressionism — an intriguing disposition of colour, iconographic lines and shapes, and recurring animal and humanist motifs. His later abstract paintings were often inspired by traditional Ndebele, Xhosa and Zulu imagery.

Born in Durban, Maqhubela moved to Soweto in the late 1950s with his family, where he attended Orlando High School. Like many black artists trying to establish a fine art practice in a country with a school system predicated on separate development, institutions like Polly Street Art Center in Johannesburg became important spaces for young black artists and their creative pursuits.

The art centre not only became an important space out of which a whole generation of pioneering young artists, including Maqhubela, would emerge, it was also one of the few spaces where artists could bypass some segregationist impositions and connect across racial lines. He joined Durant Sihlali’s weekend artist’s group and subsequently studied at the Polly Street Art Centre under the guidance of Cecil Skotnes and Sydney Kumalo.

Church is intended to offer artists, curators, writers and other cultural agitators a platform to experiment
Art & Design
7 months ago

As a multiskilled artist, Maqhubela was a masterly painter, draughtsman, and mosaicist. During his time in Soweto, his murals adorned several schools, community centres and public spaces like Baragwanath Hospital and the Oppenheimer Towers in White City Jabavu. The late great artist David Koloane often credited Maqhubela for playing a significant role in helping him establish his practice as an artist. Maqhubela gifted Koloane his first set of materials for painting and introduced him to galleries where black artists were recognised in nonrestrictive ways.

A turning point in Maqhubela's career came in 1966 when he won the coveted first prize at the Adler Fielding Gallery's annual Artists of Fame and Promise exhibition, with a remarkable conté drawing titled Peter's Denial. Selected out of 900 submissions, Maqhubela became the first black artist to win this prize, ahead of well-known white artists. The trip included a return ticket to Europe. According to Marilyn Martin, who curated A Vigil of Departure — Louis Khehla Maqhubela, a retrospective 1960-2010, at the Standard Bank Gallery in Johannesburg (2010), and has written extensively about Maqhubela’s work. 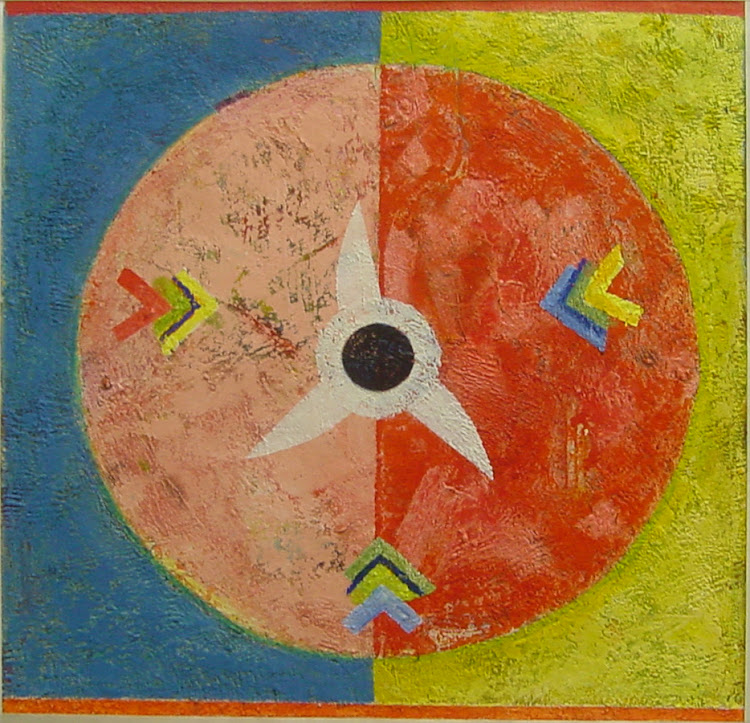 He travelled extensively through several European cities where he encountered the works of Vincent van Gogh, Salvador Dali, Joan Miró, Pablo Picasso and Paul Klee to name a few, and the latter had a particular impact on his work. He also met fellow SA artists Gerard Sekoto and Douglas Portway through his travels, connecting deeply with Portway through a shared interest in abstract compositions.

In Germany, Maqhubela found similarities between German expressionism and African art, an observation that challenges the notion of modernist art as an inherently Western invention. Describing his work in an interview with Marilyn Martin as part of the essay accompanying the 2010 retrospective Maqhubela expressed, “Even abstract art by a black practitioner was a declaration of war against being stereotyped, bearing in mind that abstraction has, for centuries been Africa's premier form of expression. Why would your ancestral form of expression suddenly be deemed 'foreign' to the black man of the 20th century'. 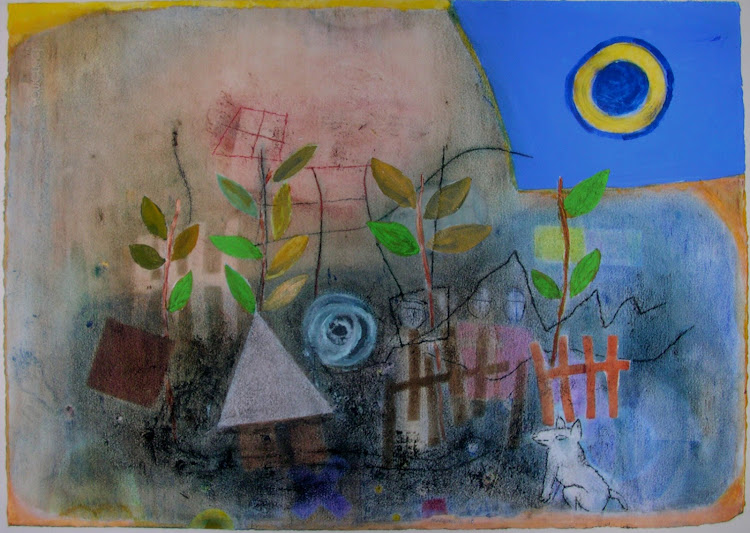 Back in SA, life under a repressive regime and the heightened state violence of the 70s made life difficult for the artist, even with a considerable amount of success. In 1973 Maqhubela and his family went into voluntary exile, living first in Ibiza, for a few years before moving to London where he settled and furthered his education at Goldsmiths College (1984-1985) and the Slade School of Art (1985-1988). At the Slade, Maqhubela developed his printmaking technique and went on to make a series of etchings that are considered among some of the most prominent works of his life.

Reflecting on Maqhubela’s life, friend and London-based gallery owner Kapil Jariwala said: “It would be a mistake to characterise his work as the art of an exile — someone longing for the past and alienated in his adopted country. Nothing could be further from the truth: he thrived in the London art scene where he was positively welcomed, recognised and supported by the most eminent collectors and artists with whom he forged meaningful dialogues and friendships, which endured until the end. What is apparent is that the accumulation of all his experiences produced magical paintings that belong to the here and now — they were as relevant in London as much as they were in Johannesburg or New York — in fact to the whole world”. 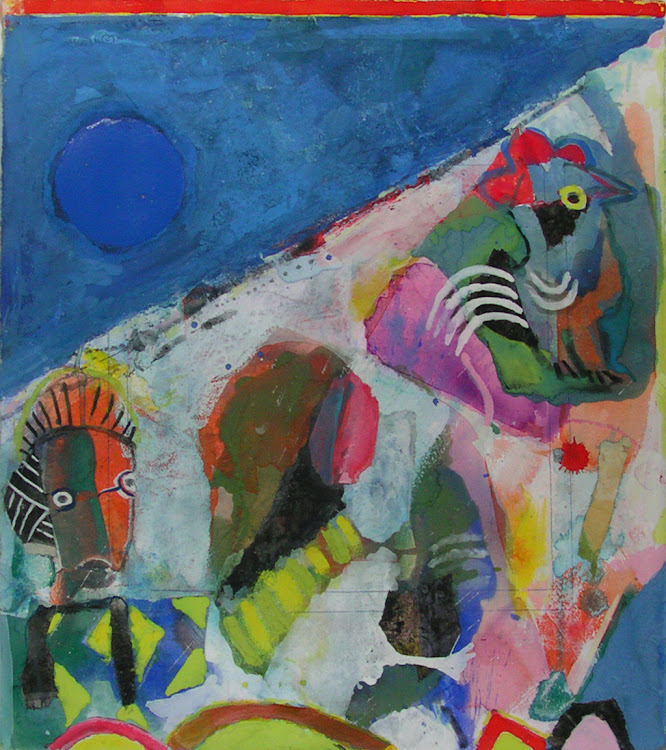 Maqhubela's work has appeared extensively in galleries and museums both in SA and worldwide. In addition to the Standard Bank Gallery, A Vigil of Departure — Louis Khehla Maqhubela, a retrospective 1960-2010, also travelled to the Iziko South African National Gallery in Cape Town and the Durban Art Gallery. A piece titled Tyilo Tyilo, inspired by Miriam Makeba's composition of the same name was acquired by the National Museum of African Art, Smithsonian Institution, Washington DC.

His pieces were exhibited as part of A Black Aesthetic. A View of South African Artists 1970-1990 curated by Same Mdluli at the Standard Bank Gallery (2019). In London, he is represented by the Victoria & Albert Museum. His works can also be found in collections belonging to the Johannesburg Art Gallery, Iziko SA National Gallery, Durban Art Gallery and the University of Forte Hare.

There’s much more to the Cape than wine. Franschhoek is a must-visit destination for art lovers too
Art & Design
5 months ago

Nandipha Mntambo’s Agoodjie is a thrilling celebration of the elite female warriors of Dahomey that restores an important insight into a proud and ...
Art & Design
7 months ago
Next Article
© Wanted 2022 - If you would like to reproduce this article please email us.