This richly detailed Cape Town apartment is an ongoing experiment in design, art, and life 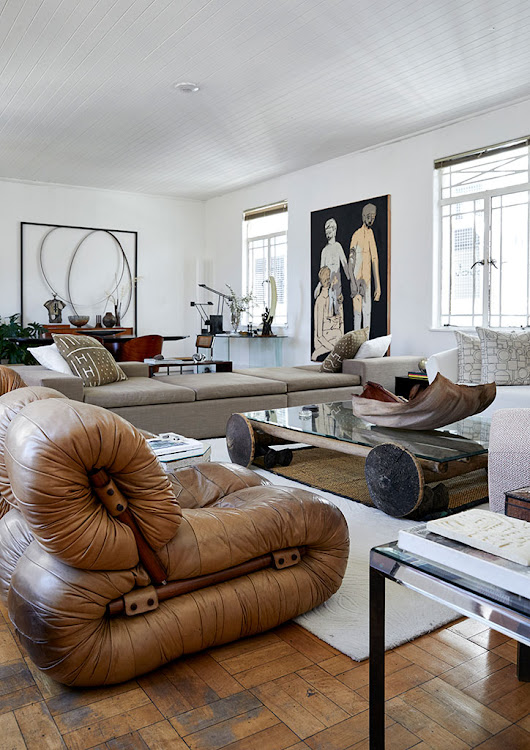 As a sculptor and an interior curator respectively, it was inevitable that Rodan Kane Hart and Maybe Corpaci would treat their home as something of an experimental space. It is a constantly evolving creative outlet for their ideas and collections of art and design as much as it is a home, studio, and refuge.

It’s at the very top of a 1930s building in Cape Town’s CBD, originally built for a shipping company. Its polished granite plinth, ornate turret, and richly decorated cornice speak of an era of opulence and prosperity. Arched doorways and parquet floors characterise Kane Hart and Corpaci’s apartment. They were attracted as much by the grandeur of the spaces and volumes, which would allow Kane Hart enough space to have his studio at home, as they were by the period detailing. Before moving here, he’d always relied on industrial buildings to provide the space he needed to work as a sculptor, creating the architectural steel forms for which he’s known.

Kane Hart began collecting furniture when he was in his 20s. “I’d sell a few artworks and buy furniture,” he says. Corpaci adds that the apartment left them with “a lot of space to [fill]” when they moved in.

“Then we started collecting together in seriousness,” says Kane Hart.

Corpaci points out that, perhaps as a result of the fact that they found themselves searching for particular pieces and designs, and the collection accumulated over time, their apartment grew around the furniture rather than from an interior-design concept or preconceived idea. Their creative energies have been devoted to figuring out how to combine and recombine individual pieces, rather than adhering to a “top-down” approach, as Kane Hart puts it.

“It starts with one piece and then we create a narrative around it,” says Corpaci. “It happens quite organically. There’s nothing that’s premeditated about it, or specific to a layout that we stick to.”

As the son of an architect, he grew up with a sensitivity to “spatial dynamics”, as he puts it. His sculptural works are often described as architectural, frequently interpreted as experiments in how forms affect our perception of space.

In fact, the root of his interest in collecting furniture stems from his notion of furniture as functional art — a practical manifestation of what he explores through sculpture. Kane Hart adds that he can’t help feeling we’ve become overspecialised, too constrained in our designated disciplines. 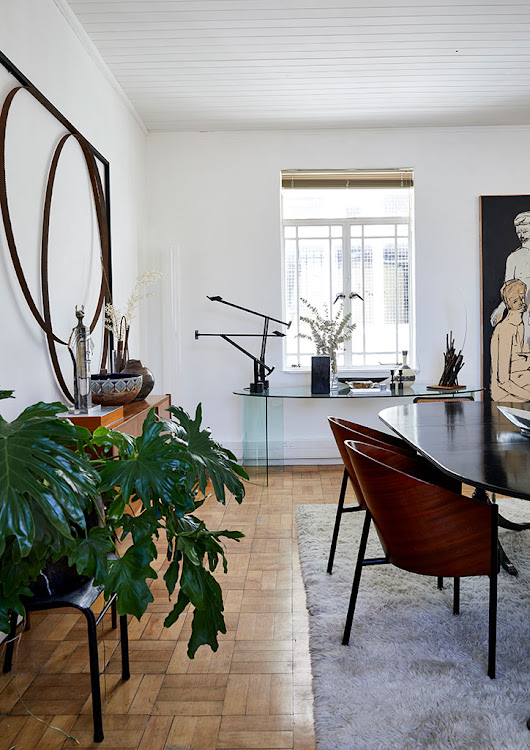 The dining area includes an ebonized dining table that Corpaci and Kane Hart found for a bargain.
Image: Greg Cox 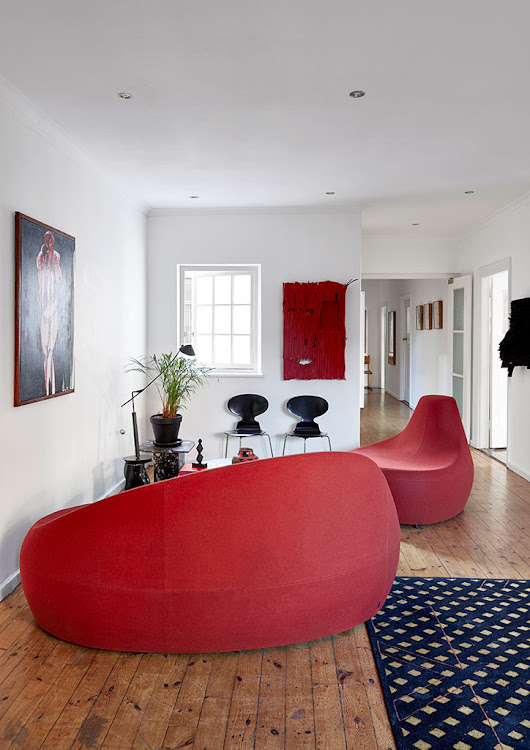 The entrance hall of the top-floor apartment.
Image: Greg Cox

In many ways, Corpaci and Kane Hart’s apartment is a riposte to the limits of overspecialisation; it’s an invitation to combine and cross disciplines.

He suggests that, whereas art often seems purely emotional, furniture design, perhaps because it is practical, retains a narrative quality that he loves — a kind of patina of use.

“I think architecture and design are fields that are imbued with history and experience,” he says.

The apartment is very much a meeting of two individual styles. Corpaci’s influence comes through in something a little softer and in the whites, creams, and beiges in the living room, for example, while she describes Kane Hart’s preferences as “angular… black and chrome”. 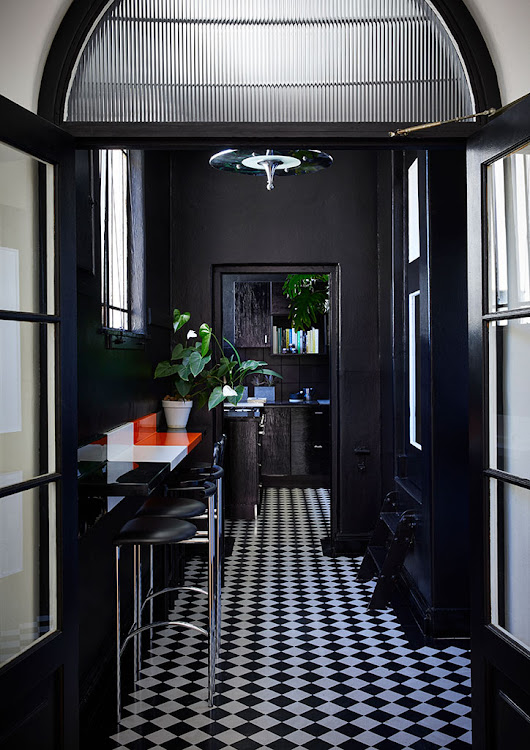 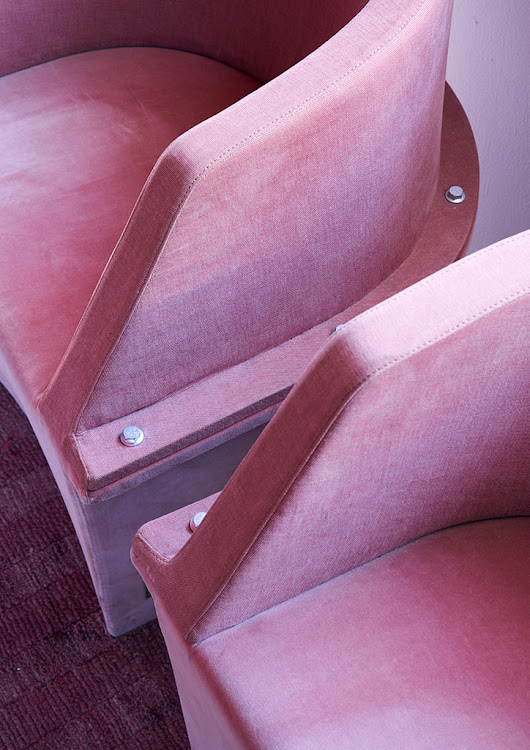 The lounging space in the “record room”, where Kane Hart keeps his collection of vinyl records, with a special interest in punk.
Image: Greg Cox

Having his studio at home, now, he says that he can easily test his sculptures in a domestic environment whenever he wants. “I can [bring in] some of my pieces to see how they work in a living space,” he says. It’s a habit that led to their current venture, an alternative take on a gallery called TheFourth.

One year, instead of participating in the Cape Town Art Fair as an exhibitor, Kane Hart and Corpaci combined their talents and did something different. “I thought, let’s look at doing a fringe event,” he says, “and we came up with this concept called Apartment.” 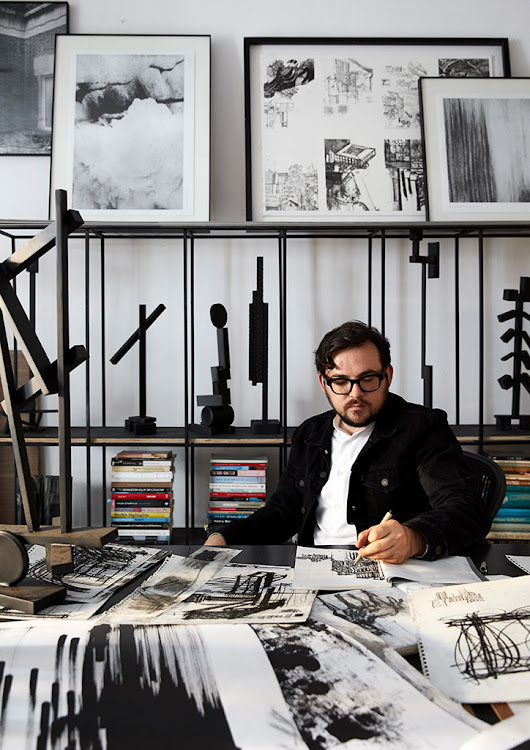 Kane Hart in his studio among several of his own works.
Image: Greg Cox 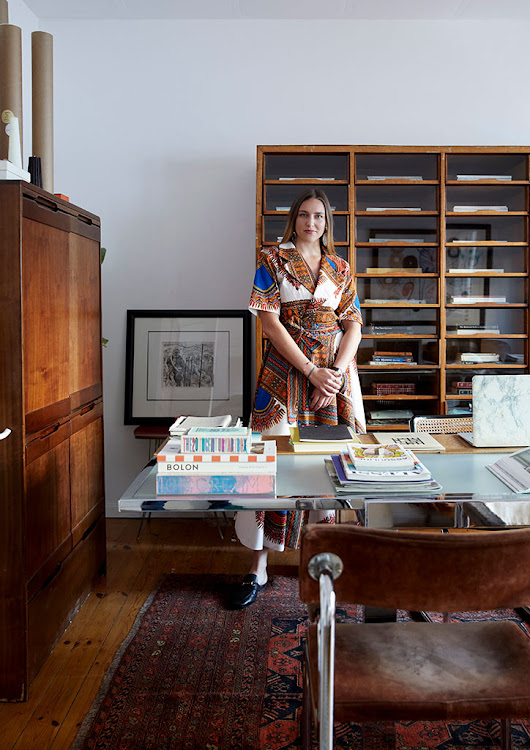 They temporarily turned their apartment into a gallery and opened it to members of the public. The idea was based on the premise that, rather than the white cube of the gallery, in reality we tend to experience art in “domestic” and “intimate spaces” — people’s homes.

Following that notion, they launched TheFourth. “It’s a similar concept to Apartment,” says Corpaci, “just in a more commercial fashion”. She gets to experiment with interiors in a somewhat more abstract way than she can with clients or in her own home, while artworks by Kane Hart and a number of his contemporaries are experienced with a sense of how they might belong in the individual, lived narrative of a life.

Upstairs, while Kane Hart and Corpaci’s home might be a kind of personal creative laboratory, it’s also a testament to how life takes its own unexpected turns and how the “narrative” of life has a way of leading us. Living spaces, as much as life, are humanised by acknowledging this aspect of history. It’s one of the ways they become integrated with a new story, while acknowledging that patina of history that fascinates Kane Hart. 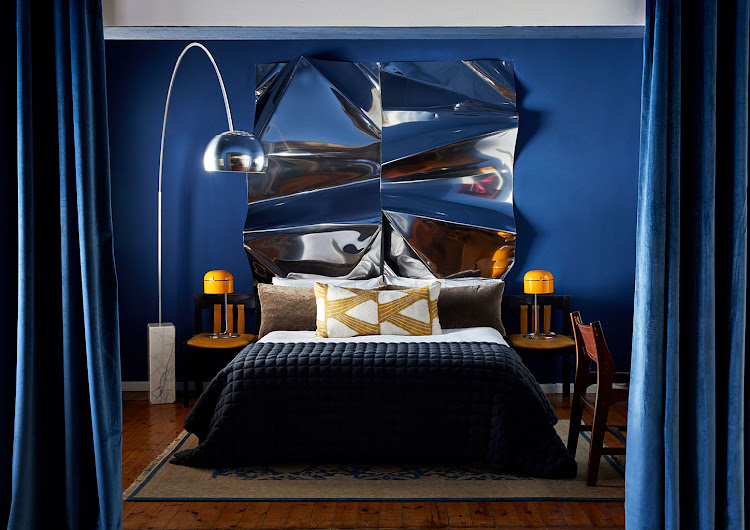 The master bedroom includes a sculpture by Kane Hart functioning as a headboard.
Image: Greg Cox

He likens the process to something he encountered collecting vinyl records. He says that collecting isn’t so much about the objects one pursues as it is about the discoveries one makes along the journey.

And that’s why, for him and Corpaci, it’s so important that there’s no end in mind. “It’s never finished,” she says of their apartment. “It’s a playground: an experimental place where there are no mistakes.” This particular experiment is about ongoing inspiration, new interests, and, ultimately, adding another layer of history.

Feel right at home at the new, multi-use hotel — a stylish, über-cool spot to stay, work and play in the Mother City
Travel
1 year ago