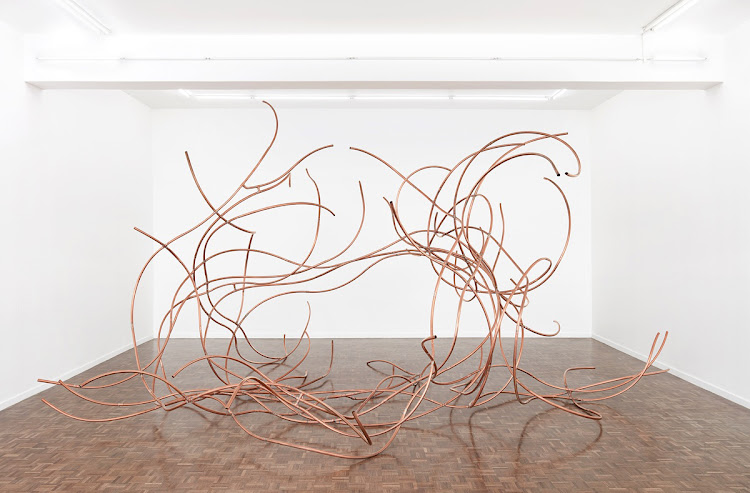 Nicholas Hlobo’s exhibition now on at Stevenson in Johannesburg is small, but worth a visit because it seems to represent a pregnant moment or a turning point in his work. That might be interesting enough on its own terms, but Hlobo is such a startlingly original artist, and such a pioneering figure, especially when it comes to the place of African art in a global context, that a new direction in his work seems to matter more broadly.

Hlobo’s work seems to breathe new life into the possibilities of abstract art when it often seems exhausted in European and American traditions. Mark Coetzee, curator of Zeitz MOCAA in Cape Town put it well in a video interview when talking about securing iimpundulu zonke ziyandilandela, Hlobo’s huge dragon-like “lightning bird” sculpture that was suspended in the museum’s central atrium when it opened. The sculpture was originally made for the Venice Biennale in 2011, and Coetzee remembers seeing it there for the first time: “I realised that this was a seminal object of the 21st century, and it’s a seminal object from Africa.”

Hlobo’s work carries that portentousness: the idea we so often hear about that the seeds of the future lie in African ideas and aesthetics. He has taken contemporary African art to the world in with an impact very few others have managed. Around the time of the 2011 Venice Biennale, he took part in The Rolex Mentor and Protégé Arts Initiative and was mentored by none other than Anish Kapoor. He’s exhibited at Tate Modern. In fact, this exhibition sits somewhere between a recent one featuring similar copper sculptures in Cape Town, and the upcoming exhibition at the SCAD Museum in Savannah, Georgia.

Sadly, ‘wrist model’ is not a category
Watches & Jewellery
4 years ago

On a smaller scale, you can recognise his influence in the work of other significant local artists, from the almost creature-like, organ-like, phallic or foetal sculptures of Mary Sibande’s later work to the intricate stitching in the work of Igshaan Adams, to take two fellow Standard Bank Young Artist alumni as examples.

Isango is an exhibition of just six works – three copper sculptures that Hlobo describes in the exhibition blurb as “frayed hoola hoops”, which are a newish thing for him, and then three of his trademark stitched canvasses, which are cut and sewed up with ribbon and pieces of leather to create some of the strange, undefinable, almost visceral forms and tentacled patterns he’s well known for. 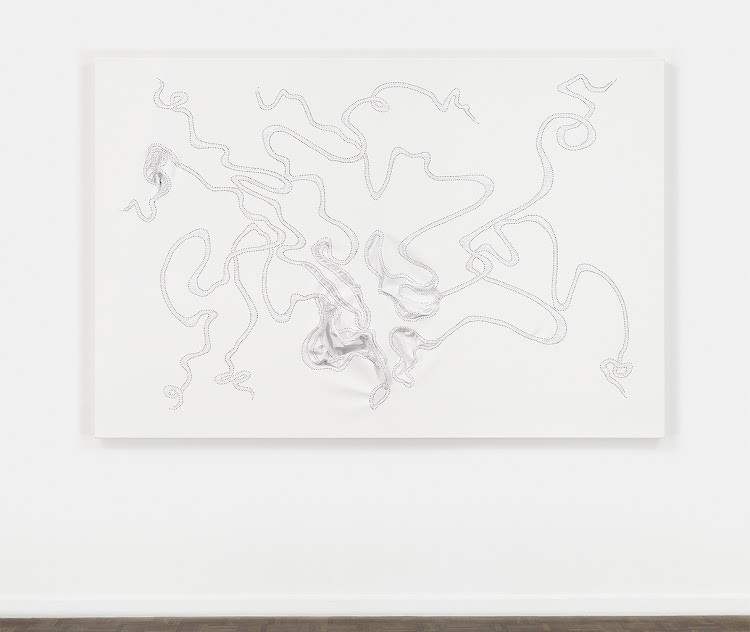 The copper sculptures are very different from the famous amorphous creature-like works he makes using the discarded rubber inner-tubes of truck tyres, stitched together with satin ribbon. Those have a weighty, solid, monolithic presence. These spiky copper tangles represent a changing approach for Hlobo, although the snaking lines are carried through from earlier works, and you can see the connection between the “hula hoops” and the canvasses on the wall.

Isango means something like gateway. The copper tubes in some of the sculptures are tipped with candle sticks and door handles, plumbing implements and the keys of wind instruments, evoking not only the elements, but doorways, entrances or transitional spaces. Copper itself is connective, conductive and volatile. The tubes seem at once to draw you into the tangle at their centre, and repel you with their outward-pointing ends. They do quite magical stuff with the space around them. Somebody once called Hlobo sculptures “spatial provocations”, and dropping these copper forms into a gallery space certainly seems to tease and electrify the air around them. 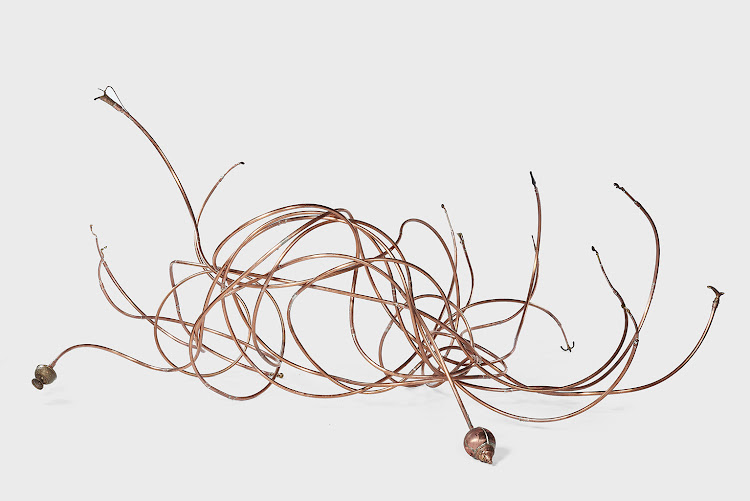 Hlobo’s brand of abstraction does include an element the sort of self-dramatized creativity that you might associate with 20th century US abstract expressionists like Jackson Pollock, and a habit of channelling that creativity through personal experience and expression, but his works are overwhelmingly metaphorical. Also, abstract art is often understood as either an attempt to reduce art to pure form, freeing expression from the burden of representation, or to signify the beginning of a new cultural era, starting from scratch.

As much as Hlobo’s sculptures tend to stand for something – referring to a saying or engaging with reference to Xhosa cultural heritage – they are also undeniably about unmaking recognisable forms and making unrecognizable ones. The do seem to contain the seeds of something new. 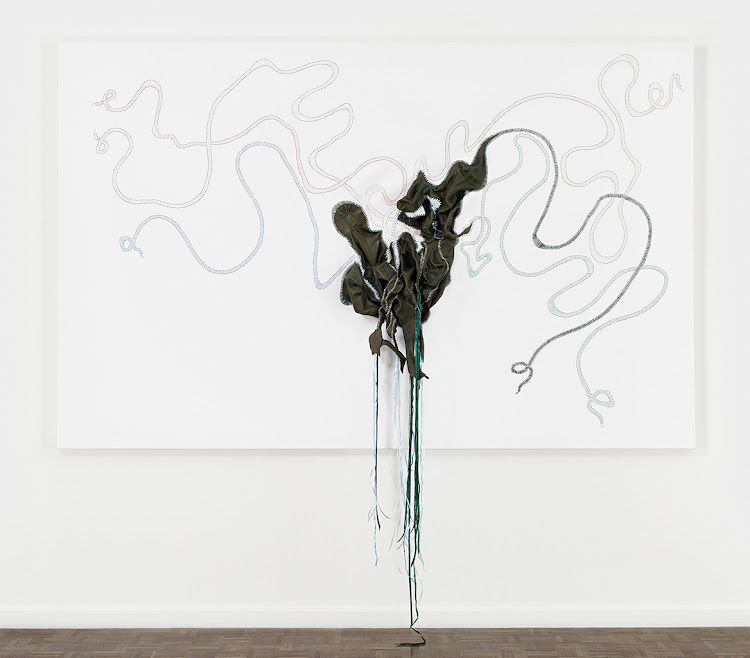 But the tangled gateway that those copper sculptures offer spits you out as much as it draws you in. They point back at you and repel you as much as they seem to guide you inwards. Speaking about his own creative evolution, Hlobo says in his exhibition blurb, “Perhaps now I’m about to move, I’m about to alight. We’re stepping through the door.”

Let’s not forget that the door he’s referring to is as much a tangle and a maze as a transformative object. But there’s also something less navel gazing in this: the sense of the zeitgeist that he seems to capture. Someone spoke of his stitched works, and the labour of their construction dramatizing the labour of self-creation. The transitional space that Isango seems to represent teasingly unsettles the narrative of the pregnant African moment.

- Nicholas Hlobo's Isango is on at Stevenson until 18 January 2019.

KABOOM! a new exhibition at the Goodman Gallery, is a chance to see some of the material that went into making Kentridge's The Head & The Load
Art & Design
3 years ago

The South African ballerina has become more in tune with her body due to her Rolex mentorship under Israeli dancer-choreographer Ohad Naharin
Voices
4 years ago
Next Article
© Wanted 2022 - If you would like to reproduce this article please email us.