Winner of the 2018 Standard Bank Young Artist Award for Visual Art, Adams plays complex games with the material and spiritual 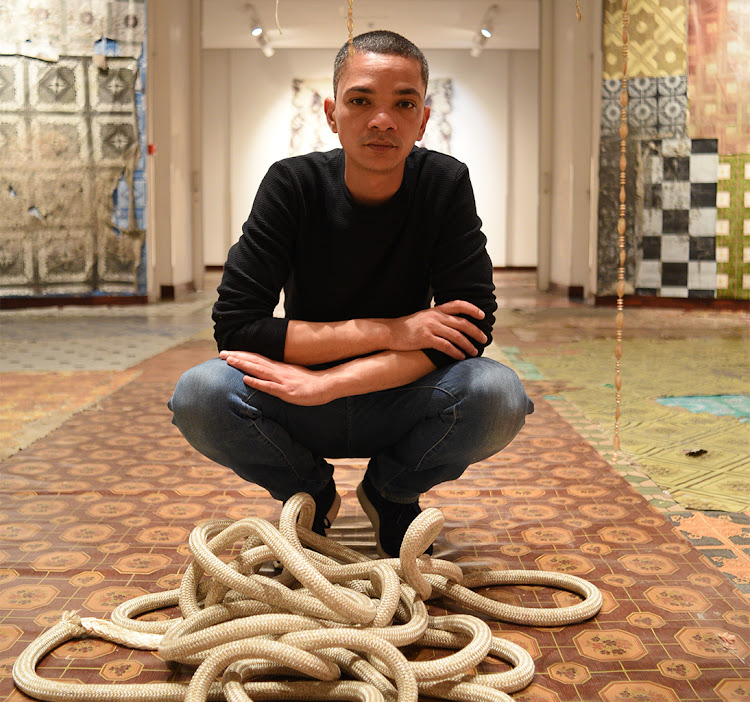 There is a little leaflet in the catalogue for Igshaan Adams’s exhibition now on at the Standard Bank Gallery. It slips out from the between the pages as you flip through it, providing “book handling instructions”.

“This book should be handled in a similar manner to the Qur’an, or other consecrated texts,” it reads. When not in use, it should be wrapped (it comes bound in cloth) and placed on the highest shelf in the house; never on the floor.

It’s a provocation that comes as a bit of a shock. Apart from being on the sacrilegious side, it takes hubris to tell the world your exhibition catalogue should be treated as sacred, even if you have just won the Standard Bank Young Artist Award. But, despite the jolt of danger and suspicion it might deliver at first, the catalogue is a pretty good way into an exhibition that relies as much on what its artworks don’t tell you as what they do.

Art meets virtual reality: We are all Mary now

Even as an object, never minds its contents, the book has meaning. The stitching on the catalogue’s spine is exposed – sealed with clear glue so it displays the usually hidden details of the book’s construction. It’s a nice echo of a lot of the stitching and weaving and beading that goes into Adams’s artworks. It appears unfinished, or perhaps unmade, while celebrating the methods of its making. The tactile appeal of its embossed raw cardboard binding also has an unfinished quality. It’s fairly trendy in a hipster-ish way but effective in its emphasis on both the spiritual and the material.

Adams has been on the art world’s radar as a rising star for some time and this exhibition, titled When Dust Settles, presents a culmination of his early career while revisiting some of his previous work.

On the most mundane level, you could look at Adams’s work through the lens of identity politics. With the starting point that the personal is political, his early work played around a lot with his domestic surroundings and family and his own image. One of his first exhibitions involved transporting his family’s living room into a gallery, complete with his granny watching 7de Laan. 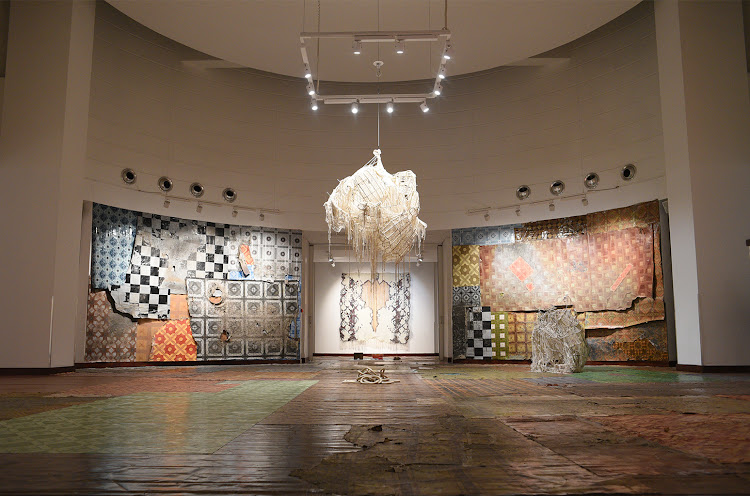 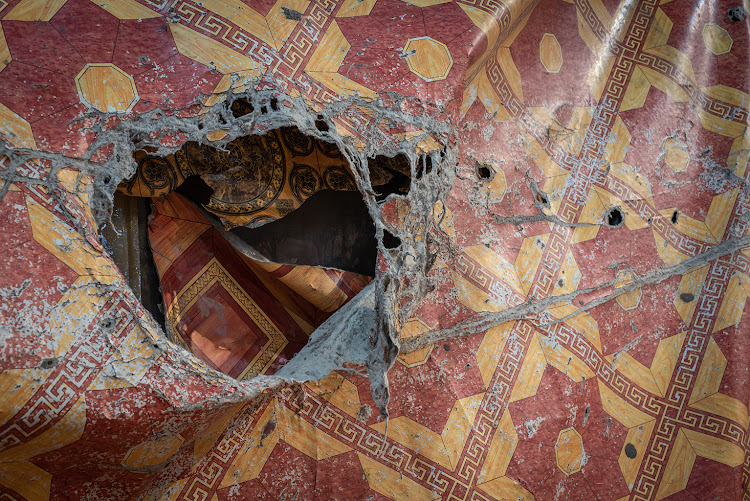 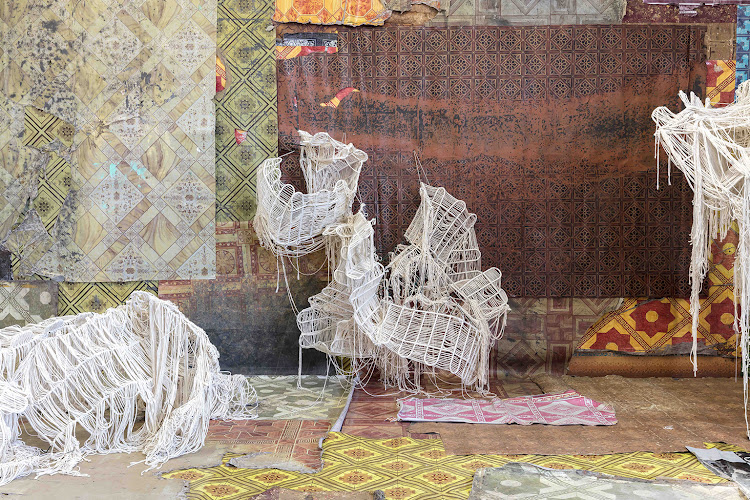 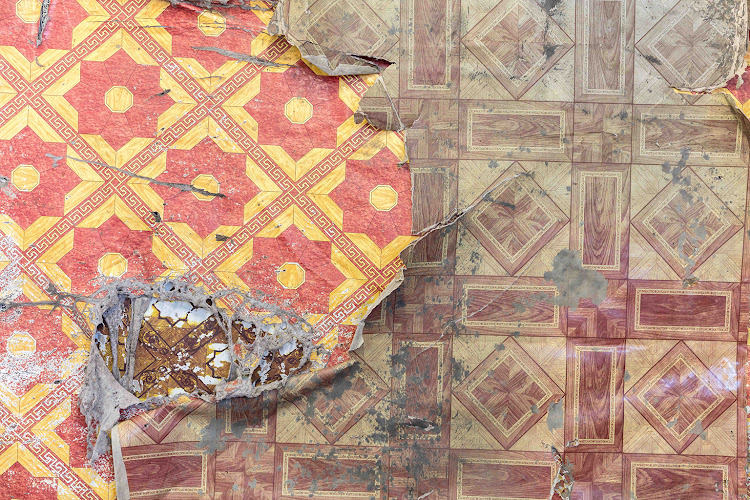 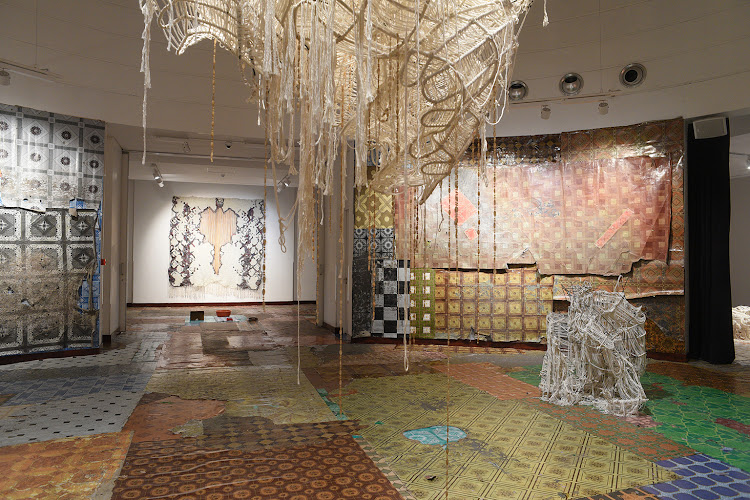 Another – reprised in this exhibition – was a collection of sections of “tapyts” or bits of lino floor that he’d taken from houses in Bonteheuwel, where he grew up, and other areas on the Cape Flats and in Khayelitsha, and which line the floors and walls of the gallery. The dirt, stains and furniture marks on them provide a kind of patina for Adams’s own light interventions, at times using Handy Andy to clean sections, or scratching into the surface, or adding other details. The intimate traces etched into the grubby residues of everyday life seem to outline the presence of the person who lived in the home they’re taken from, but perhaps as powerfully, evoke their absence.

Similarly, he once exhibited a Muslim prayer mat given to him after about 30 years of use. Its worn patches, where knees, hands and even forehead rested during prayers, seem imbued with some of its user’s identity. He called it, punningly, I am no more.

The question Adams seems to raise, and which runs through the rest of this exhibition and his career in various ways, is where the essence of a person lies. One early installation using a tangle of string curtain and wire suspended over a circular carpet was teasingly titled I am home. It somehow simultaneously is and isn’t in the material surroundings of the home or its furnishings or its family or, more broadly, its culture, history, nationality, religion and so on.

The identity politics comes into it in the sense that it’s all about where you locate the self. Adams, as just about everything written about him trots out, occupies a complicated position when it comes to identity. Wherever he turns, it seems, he is neither one thing nor another. To start with, his Cape Malay roots, under the legacy of apartheid racial classification, leave him neither black nor white. His parents are Muslim but he was brought up by Christian grandparents. As a homosexual, however, his Muslim religion rejects him.

All the academic buzzwords – liminal, hybrid, marginal – are bandied about enthusiastically to describe the way his unique “non-category” of being can be used to subvert the social, cultural, racial, sexual, religious categories which we like to use to box each other. The classic formula of this kind of art involves inserting the self (hence a frequently occurring dimension of performative art, which Adams dabbles in, too) into a certain context and using its physical presence to disrupt the factitious aspects of identity.

The likes of Mary Sibande and Zanele Muholi have pulled off this kind of art with panache, but often it just seems formulaic now, to the point where you wonder if the artists have grown cynical, hitching their wagons to a foolproof formula, or are just naïve. Either way, you have to have something special to stand out in the ocean of artists reinserting their own images and bodies into a history that excludes them. Even Sibande found herself facing an artistic crisis of sorts, deciding to abandon her famous alter ego Sophie, and exploring the difficult question of “What next?” via a dark, almost gothic, swarm of unformed foetal shapes, birth and rebirth, when she won this award a few years ago.

Eye of the beholder: Zanele Muholi

From using photography as a form of activism to capturing some of the world’s most famous people, the work of this South African photographer is ...
Art & Design
4 years ago

Adams’s work, too, goes beyond the pat formulas of identity politics. He examines a somewhat similar take on death and rebirth (in concept at least) through his explorations of self-annihilation or the complete effacement identity via mystical and spiritual rituals, combined with art and its spaces and practices.

He moved from the found objects and performances involving his family (one well-known one involved his father performing Muslim burial rites on his still living son before an audience in a gallery) to other kinds of transformative artistic practices.

Sticking with domestic and religious paraphernalia – prayer mats, nylon washing-line cord, curtains, tassels and bead necklaces – he started doing things like weaving his own tapestries, sometimes including fragments of religious script, sometimes abstract. Sometimes they seem to be somehow unthreaded or undone.

These in turn evolved into more sculptural pieces, three-dimensional forms made by weaving cotton twine (and sometimes the nylon and beads) onto skeletons or scaffoldings made using wire garden fences – another domestic object and symbolic border he’s transformed and subverted. The abstraction or incipient forms of Adams’s sculptures suggest a “becoming” – a process rather than a finished object. Or maybe a celebration of betweenness as the most creatively productive – but difficult and painful – place to be.

For all his rejection, or constant need to escape, the grime of the political and material world – the ways in which religion fails the spirit, in which family fails the child, politics fails the individual and art and culture fail the lived life – he constantly returns to these things with love and generosity.

His seemingly dangerous, or even profane, games with religious paraphernalia is a prime example. Rather than accept that Islam does not accept him because of his homosexuality, he reads its texts against the grain and tries, through sheer will and love, to keep the door open – to allow it to transform to accommodate him.

That goes for the gallery space too. The secular art-going public might be in the habit of seeing the white cube as occupying its own, distinct cultural realm, but Adams doesn’t accept that either. Nor does he reject it. Instead, he reconstitutes it variously as filthy domestic space and as sacred or religious space. Once again, he expresses his love by not letting the art world – another funny bunch of cultural practices – escape without being unsettled and perhaps charged with new potential.

That’s what, I think, the treatment of the exhibition catalogue as sacred text is about. It’s not liberal taunting from the margins – it’s something much more sincere and heartfelt than that. It’s a show that the sacred and sublime exist in the mundane and ordinary. The untreated board of the cover and the exposed cotton stitching on the spine – never mind the representation of an artist’s work that it enfolds – articulate just how important the everyday is. Spiritually, we might not be “in” the material baggage of our lives, but they bear our trace – we live through them, and they give meaning to our lives, although we’re constantly escaping them. Afterwards, like the “tapyts”, they might be a funny combination of articulate and mute. Or, in the case of the abstract or chaotically unformed sculptures, they might represent something incipient: domestic materials reworked, re-envisioned and made strange and beautiful.

When Dust Settles is on at the Standard Bank Gallery, Johannesburg, until September 15, 2018, after which it will travel on a nationwide tour of museums and institutions across seven cities.

Wits PhD graduate Dr Same Mdluli has joined the Standard Bank Gallery as manager. We asked her to share her fresh new vision for one of the country’s ...
Voices
3 years ago

'Harmonia: Sacred Geometry, the pattern of existence' on at the Standard Bank Gallery in Johannesburg comes with a twist – it’s all new work…
Art & Design
3 years ago

Changing perspective: the art of photography through Musa Nxumalo's lens

Photography is not generally seen as collectible, an attitude Turbine Art Fair guest curator Musa Nxumalo plans to change with his exhibition of ...
Voices
2 years ago
Next Article
© Wanted 2021 - If you would like to reproduce this article please email us.