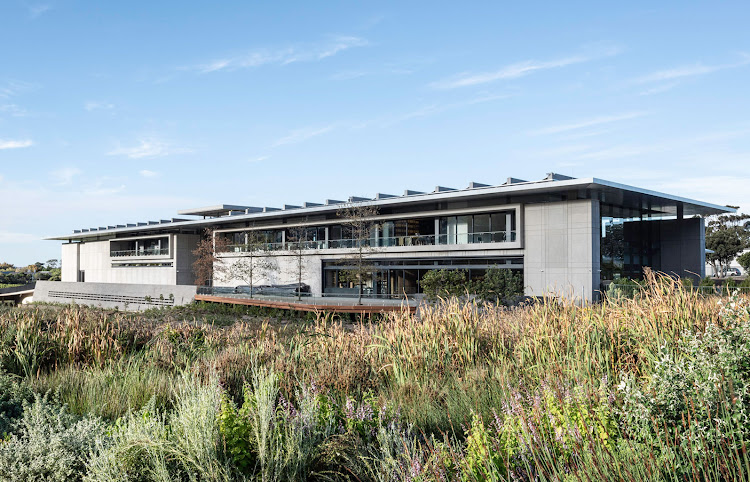 The Norval Foundation is located on the lower slopes of the Steenberg mountains in the Constantia wine valley
Image: Dave Southwood

The April Garden Party celebrating the launch of Norval Foundation, a tony art museum on the lower slopes of the Steenberg mountains in the Constantia wine valley, bookends an astonishing period of emergence for Cape Town as an art destination. And I really do mean astonishing. The past two years have witnessed a raft of new private art museums opening in this water-scarce outpost for opposition politics and fancy dining.

It began modestly in February 2017 with the opening of collector Tammi Glick’s Maitland Institute, a free-form exhibition space located in a former meat-processing warehouse. The institute is resolutely non-commercial, and its gritty urban address along Cape Town’s working-class Voortrekker Road highlights a major theme in the global museum boom: urban renovation. Glick is a director at Daleglen Property Group, an eight decade-old company led by her father, Cedric Glick. 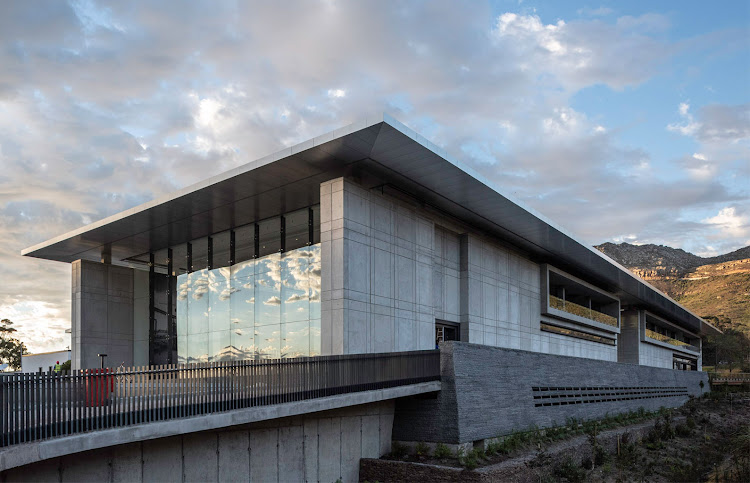 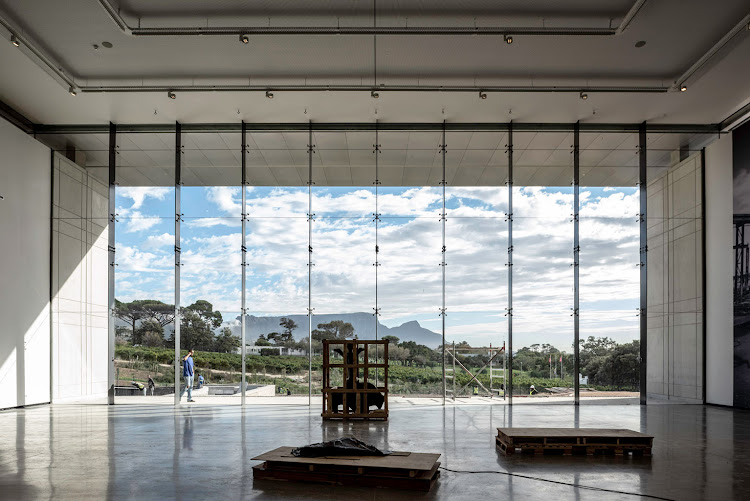 Then in September, the Thomas Heatherwick-designed Zeitz Museum of Contemporary Art Africa  (Zeitz Mocaa), which focuses on 21st century art, opened in a repurposed grain silo at the V&A Waterfront. The cathedral-like cavity carved into the vertical concrete tubes of the century-old building is what Instagram hearts were made for.

The reason for the VIP turnout is uncomplicated: A4 is an initiative of collector Wendy Fisher, the Potchefstroom-born daughter of billionaire businessman Nathan Kirsh. Fisher, who lives in London and New York, heads the board of trustees at the Solomon R Guggenheim Foundation, among other accomplishments. 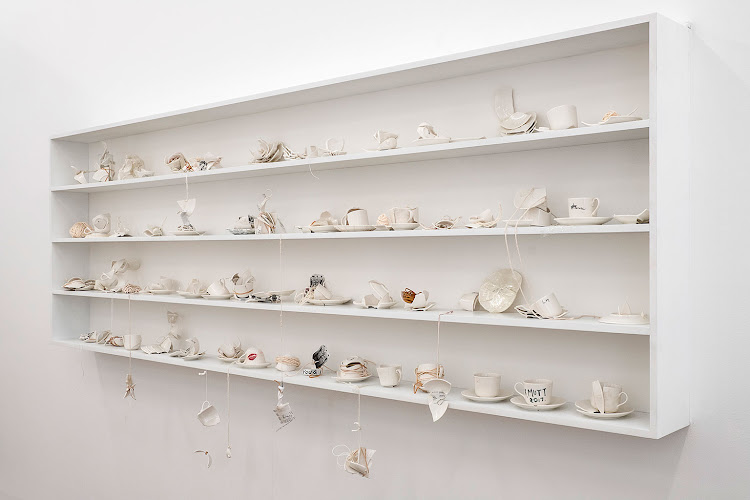 Power does not operate in a vacuum. A4, whose name is an acronym for “academy, access, archive, and apparatus”, has faced strong pushback from the Boycott, Divestment, Sanctions (BDS) movement, an anti-Israel lobby group, due to Kirsch’s stake in Magal Security Systems, whose perimeter-intrusion systems were used on the West Bank barrier.

“There are optics and contexts that are unavoidable,” said A4’s director, Josh Ginsberg. “The people who support us are a fantastic family.”

Zeitz Mocaa has similarly been in the crosshairs, for instance, standing accused of a cosy relationship with privately owned Scheryn Art Collection, a promotional vehicle for contemporary art, whose directors include investor Herman Steyn and entrepreneur Dabing Chen.

The metamorphosis of the old grain silo at the V&A Waterfront into a cutting-edge cultural landmark — the newly opened Zeitz Mocaa — is set to thrust ...
Art & Design
4 years ago

The arrival of mall developer and collector Louis Norval’s eponymous art foundation marks an important moment of consolidation as the growing trend towards private museums spreads north. Trend, you ask? Still to come is the Javett Art Centre at the University of Pretoria, and there’s also talk of collector Gordon Schachat opening a Johannesburg space for his pioneering collection of contemporary art.

In this increasingly crowded landscape, the Norval Foundation looks set to be a benchmark, at least as a piece of infrastructure. Its programme, which focuses on researching and exhibiting 20th- and 21st-century art from South Africa and beyond, will — like all these new museums — have to prove itself over time.

The foundation is located opposite the US Embassy, on a site between Steenberg Road and a wetland; its centrepiece is a DHK-designed rectangular building with off-shutter concrete walls and glass atrium overlooking a 4ha sculpture garden. The building’s public-access areas are spread across four floors, two sunken below ground, and host nine galleries and a restaurant named for artist Cecil Skotnes and supervised by chef Phil de Villiers of 54 on Bath acclaim.

The new foundation is lavishly specced. Its galleries are voluminous and have a minimum 4m ceiling height. Still looking up, the ceilings incorporate sound-dampening technology and high-end Erco lighting from Germany. The roof is decked with solar panels, generating 35% of the museum’s power. There is also an enormous climate-controlled storage facility buried underground, with waterproofed double walls, drains, and gas suppression in case of smoke or fire.

“The one thing I can tell you unequivocally: I decided not to compromise on one thing,” Norval says. “We made the optimum decisions to build a world-class institution.”

My interview took place during a rare site inspection by Norval, who is domiciled in Mauritius and spends only three months of every year in South Africa. He also has homes in London and in Portugal’s Algarve region. Norval is a former amateur golfing champion and quantity surveyor by training. This self-styled “hands-on” guy, says he handled the nitty-gritty of the build remotely. “This has been a breeze compared to what we have done,” he says, referring to his former life as one of this country’s most successful mall developers.

His projects include Woodlands Boulevard in Pretoria, Clearwater Mall in Johannesburg, and Garden Route Mall in George.

The building is beautiful and timeless, but it is ultimately not about the buidling and the architect, but rather the art

The simple longitudinal form of the foundation is the outcome of exploratory visits by Norval to more than a 100 art institutions around the globe.

“I looked at everything, all the extremes, from Yoshio Taniguchi’s simple and timeless model, to Frank Gehry on the other end,” Norval says.

Taniguchi is best known for his sober modernist redesign of New York’s Museum of Modern Art in 1997, while Gehry’s expressionist approach to museums is evident in Bilbao, Paris, and Los Angeles.

“We opted for something closer to the Taniguchi model, if I can call it that. The building is beautiful and timeless, but it is ultimately not about the building and the architect, but rather the art,” Norval says.

The self-effacing quality of the building is, in some senses, an expression of the man who commissioned it. “I dislike flashiness,” says Norval, who netted R1-billion in cash and R1-billion in shares when listed company Hyprop paid R9-billion in 2011 for Attfund, the privately owned property fund he cofounded in 2002. “My whole style is one of not being in the limelight. It is not a strategic thing, just how I prefer it.” For a time the foundation was going to be called the Steenberg Gallery.

Norval’s interest in art doesn’t have a definitive origin story. Two events galvanised his passions as a collector. Sometime in the 1990s, he doesn’t remember exactly when, Norval paid R675,000 for what he considers his “first proper work,” a portrait of a lady with a yellow headscarf by Maggie Laubser. Over the next decade he ramped up his collecting. He bought more Laubsers and also started his “long game” pursuit of Anton van Wouw’s small bronze figures — they number 43 different figures, of which Norval currently owns 30.

In 2007, Norval attended the Kirstenbosch auction of 46 works belonging to Jack and Helene Kahn, a demure Sea Point couple without heirs who had quietly amassed a collection of modernist paintings by the likes of Laubser, Wolf Kibel, and Irma Stern. Stern’s 1936 portrait of a doe-eyed Indian woman holding two proteas sold for R6.6-million. The auction’s proceeds all went to charity.

The new must see galleries across the globe

If you're in the mood for some serious art-musing whilst travelling, make sure to put these galleries on your to see list
Art & Design
4 years ago

The Kahn sale had a profound impact on Norval, who has made it his mission to buy and preserve important collections. He paid Bruce Campbell Smith tens of millions of rand (no one is saying exactly how much) for his collection of works by chiefly black artists practising between the 1920s and 2005. Norval also purchased Barbara Jeppe and Leigh Voigt’s 279 botanical illustrations depicting the amaryllidaceae of southern Africa and John Meyer’s Lost in the Dust series of 15 narrative paintings of the Anglo-Boer War.

Of course, he bends his own rules when it comes to his favourite artist, Alexis Preller. Norval’s passion for this metaphysical painter has seen Preller’s stock rise exponentially at auction. But this biographical detail is irrelevant to the foundation bearing Norval’s name. His personal Homestead Collection is legally distinct and separate from the foundation, although it will sleep in the museum’s basement. There is also no mandate that it has to be exhibited.

Of course, there is an alignment between Norval’s interests and the foundation. As well as a worldly group show exploring the intersection of contemporary art and craft curated by former Zeitz Mocaa staffer Owen Martin, Norval Foundation is also hosting three solo exhibitions devoted to mid-century sculptors Sydney Kumalo, Ezrom Legae, and Edoardo Villa.

Norval acquired Villa’s studio and household contents following his death in 2011. It was how he met artist and historian Karel Nel, who is now an advisor and adjunct curator at the foundation.

Norval said his decision to establish the foundation in Cape Town was a no-brainer. Like Glick, Fisher, and David Green, the unheralded CEO of the V&A Waterfront who initiated the idea of an art museum, Norval recognises that Cape Town gets the tourists. Leisure is also deeply coded into the city’s DNA.

“The bigger challenge was making the project sustainable,” says Norval. “In the developed world you have a lot of state money and philanthropy helping, but in places like South Africa you have to find a model that works.”

Norval did not want to walk the path of collectors such as Cape Town investor Piet Viljoen and Moroccan property magnate Alami Lazraq. Both created museums principally to showcase their holdings, most recently Lazraq, whose Museum of African Contemporary Art Al Maaden opened at his plush Al Maaden Golf Resort in Marrakech in 2016. Norval esteems the Louis Vuitton Foundation in Paris, not for its Gehry-designed galleon with 3,600 glass panels, but because of chief patron Bernard Arnault’s strict business approach. 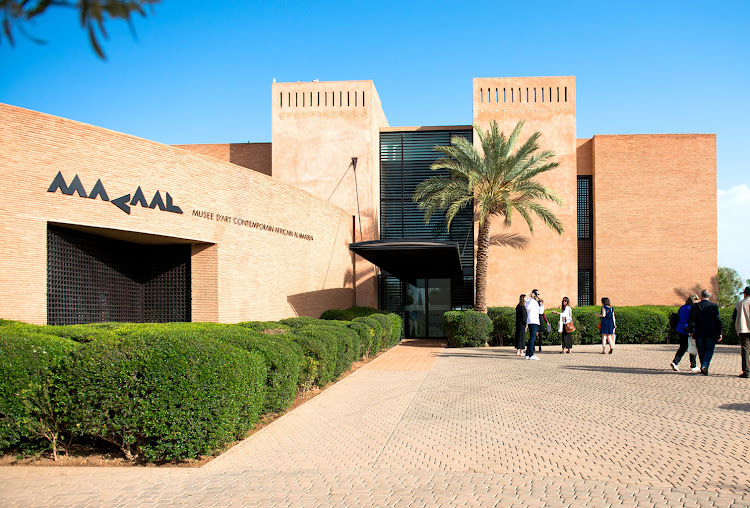 Two formal agreements underpin the creation of Norval’s private foundation. The first is a long-term lease of the building on a “peppercorn rental” (a nominal rental sum); the lease is registered against the title of the property. Another contract records the donation of startup capital to get the ball rolling. A board of trustees, the majority of them non-family members, supervises the foundation’s affairs. Four subcommittees direct its operations: their focus is on art, education, finance, and fundraising and marketing.

“I’m not going to run this,” says Norval, who considers much of his work done. “I leave the day after the opening. I’m not here to tell them how to run it. It is not about me.”