A monument to African art 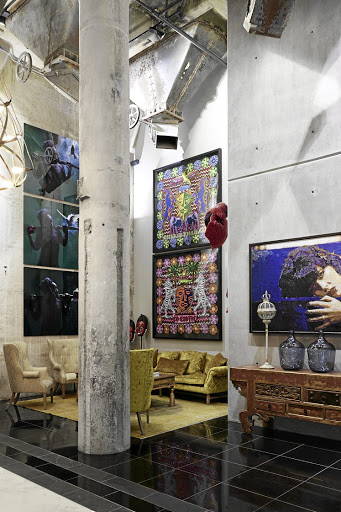 Twelve years ago, when acclaimed British designer Thomas Heatherwick first visited the concrete silo complex towering over the V&A Waterfront’s harbour edge while attending the annual Design Indaba in Cape Town, he knew instinctively that the rather grim-looking, "magnolia gunge"-covered tubular structure could be transformed into something extraordinary. What he didn’t know was that, six years later, he would be commissioned to find ways to turn the disused factory — built in 1924 as a sorting, storage and shipping depot for SA’s mealie crops — into the world’s largest African art gallery.

"We thought for about a year what to make with this unusual building of concrete tubes," Heatherwick said at the pre-opening reveal of the Zeitz Museum of Contemporary Art Africa (Mocaa) in Cape Town last week. "We could have knocked a large part of it down but we thought: does the world really need another shiny building? So we kept the concrete."

But the question was how to lure people into the building. Unlike most landmark buildings, the silo project wasn’t going to be about creating an iconic exterior. "The challenge was to make the inside more compelling than the outside," he said.

We took one grain of corn and started playing around with it ... That’s how we came up with the idea to carve grain-shaped openings into the cement walls that now form the museum’s atrium 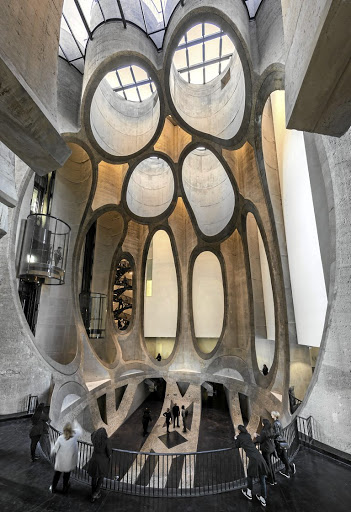 Heatherwick and his team of more than 20 London and SA-based designers and architects, who have worked on the project for the past six years, have certainly achieved just that.

Stepping into the Zeitz Mocaa’s central interior, one is immediately struck by the monumental scale of the cathedral-like atrium. It has literally been carved out of the dense cement walls of about a dozen tubes, each about 5.5m in diameter and nearly 30m in height.The atrium is surrounded by 80 individual galleries — white boxes that have been carefully placed in the remaining concrete tubes. The galleries, comprising a combined 6,000m² of exhibition space, span nine floors and are accessed via lifts and metal, spiral staircases that were crane lifted into the tubes.

The only change to the building’s original structure that is visible from outside is the addition of pillowed, multifaceted windows on top of the silos, which at night transform the building into a glowing beacon.

Creating such an ingenious interior out of a 93-year-old cement structure was no small feat. Heatherwick said it took countless attempts to come up with the final concept. "We threw a lot of ideas around. We wanted to pay homage to the building’s original use, but also had to make sure we created enough space to showcase the art. Only when we printed our 86th 3D model did we know we had finally got it right."

His inspiration for the interior took shape when a few old mealie cobs were found in the disused factory. "We took one grain of corn and started playing around with it by enlarging its shape with digital scanning. That’s how we came up with the idea to carve grain-shaped openings into the cement walls that now form the museum’s atrium."

The outer concrete sleeve of each tubular wall was retained, while a new inner sleeve of concrete was added. It took plenty of old-school crafting, sculpting and surveying techniques to ensure old and new were seamlessly merged, he said.

"Placing the concrete sleeves into the tubes without using massive beams was in itself somewhat of an engineering feat."

While the original cement structure initially seemed brutal and sterile, it turned out to be a blessing, as it challenged Heatherwick and his team’s creativity in entirely new ways.

"Concrete is very raw, but we got the chance to add some warmth and softness to it, which was interesting."

In fact, Heatherwick is now something of a concrete convert, and is keen to use more of it in future projects. 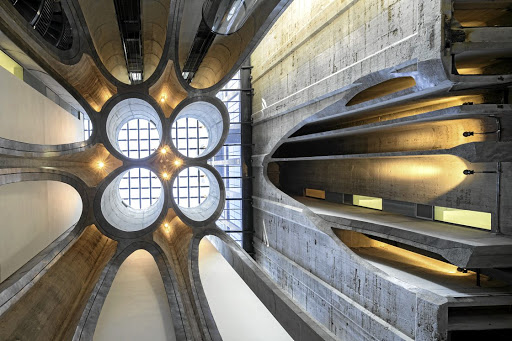 Apart from creating the unusual atrium space, the biggest challenge of the project was the budget, said Heatherwick. V&A Waterfront co-owners Growthpoint Properties and the Public Investment Corp (PIC) invested R500m to build the Zeitz Mocaa, which included the construction costs of the boutique Silo Hotel, which occupies six floors above the museum. While R500m seems a sizeable budget in rand terms, Heatherwick said it is less than a 10th of the budget of London’s Tate Modern.

Be that as it may, there is no doubt that Zeitz Mocaa provides a unique reflection of the Mother City’s industrial past, which will place the building firmly on the global architecture map alongside other Heatherwick-designed masterpieces. The most talked-about of these include the dandelion-like Seed Cathedral built at the Shanghai World Expo in 2010, which was covered in 60,000 seed-encased clear fibre-optic rods; New York City’s Vessel building, which features 154 interconnecting flights of stairs; and tech firm Google’s innovative California headquarters.

The official opening of Zeitz Mocaa to the public last Friday marks the completion of the two-year redevelopment of the V&A Waterfront’s silo district, which in itself is becoming a preferred destination among the trendy set.

Growthpoint and the PIC have invested more than R1bn to add 110,000m² of residential, office, retail, hotel and gallery space to this portion of the V&A Waterfront, which is located adjacent to the working harbour. That brings the total value of the V&A Waterfront to R17.4bn (according to Growthpoint’s 2017 annual results), 75% more than the R10m that Growthpoint and the PIC paid when they bought the precinct in mid-2011 from foreign owners Dubai World and London & Regional. 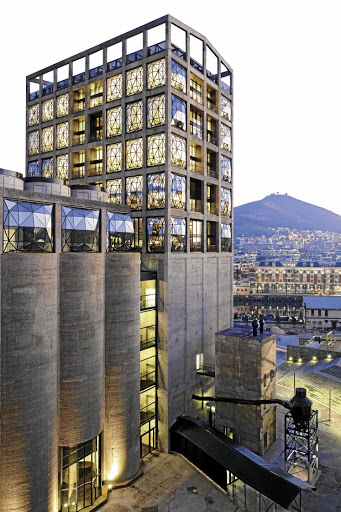 The silo district is home to two hotels: the eclectic Silo Hotel, a luxury 28-room establishment with a penthouse apartment that will set you back more than R100,000/night and a rooftop bar that arguably offers the best views in Cape Town; and the 250-room Radisson Red, a new four-star hotel concept inspired by all things art, music and fashion. The hotel is only the third Radisson Red to open its doors in the world, following a successful launch in Brussels, Belgium, and Minneapolis, in the US.

The Radisson Red concept is aimed at what the Carlson Rezidor hotel group refers to as "an ageless, expressive, tech-savvy crowd".

The silo district also boasts two luxury apartment developments, Silo 2 and 3. Apartments at Silo 3 sold off-plan for upwards of R7m at an average price of R83,000/m². Only one of its 79 apartments launched off-plan about a year ago remains unsold — a penthouse with a price tag of R48m. An ultra-luxury penthouse apartment spanning 400m² was recently sold to a local businessman for R84m, which translates into a selling price of a whopping R210,000/m². That’s believed to be a new record for SA sectional title prices on a rand/m² basis.

Zeitz Mocaa is a not-for-profit partnership between the V&A Waterfront and German art collector and philanthropist Jochen Zeitz. The former CEO of Puma has provided part of his African art collection on long-term loan to the museum. The inaugural exhibition features about 300 works of art, including pieces by established local artists such as William Kentridge, Mary Sibande, Kendell Geers, Nicholas Hlobo and Penny Siopis, as well renowned Ghanaian artist El Anatsui. mullerj@fm.co.za

The international art world descended upon the Mother City this past weekend for exclusive previews of the world’s largest museum dedicated to ...
Art & Design
4 years ago

The Zeitz Museum of Contemporary African Art (Mocaa) hasn’t opened its doors to the public yet, but we already know via previews of the opening ...
Art & Design
4 years ago

This article was originally published by the Financial Mail.You can view the original article here.