How the Basotho blanket became the brand identity of a nation

Basotho blankets are unique. They are a cultural symbol, the brand identity of a nation, but always a practical and useful garment. They are beautiful but are meant to be worn, not displayed 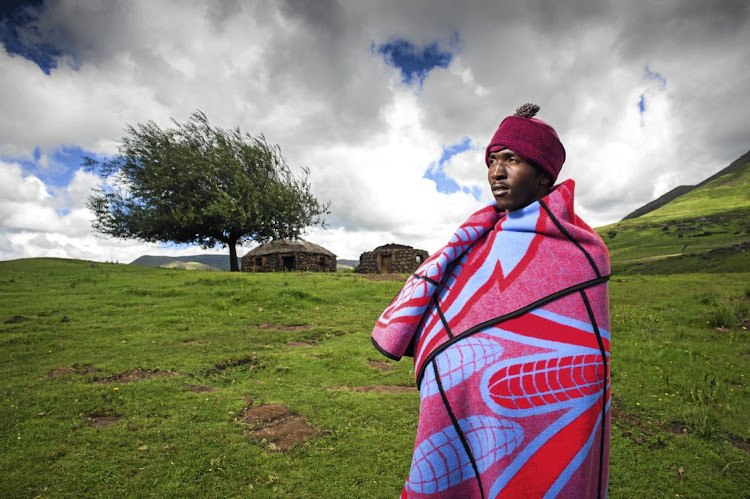 They are fascinatingly woven into the history of the Basotho nation, and are a perfect example of a colonial legacy adopted and transformed with greater meaning, not least the historic relationship between Britain and Lesotho.

Legend has it that the first blanket was given to King Moshoeshoe I in 1860 by a trader, possibly a man called Howel. The king liked it and took to wearing it around his shoulders as a kaross. His subjects followed suit. Traders had been selling blankets across southern Africa much earlier, but Moshoeshoe's adoption of one gave them royal approval.

When in 1867 Moshoeshoe asked the British for protection against the encroaching settlers, he described it as Queen Victoria "spreading her blanket" of protection over the Basotho nation. In 1868 the then Basutoland became a British protectorate (not a colony) and remained that for 98 years.

Hides and skins traditionally tanned and worn by the indigenous tribes of southern Africa became increasingly hard to find in the second half of the 19th century, and this was exacerbated by the rinderpest of the 1890s, which wiped out more than five million cattle and unknown numbers of wild animals south of the Zambezi alone. Blankets replaced the karosses, and, maybe because of their cold climate, the Basotho took to them like no other group.

A full-scale replica of a Spitfire Mk Vb fighter plane as used during World War 2 is an incongruous sight in front of the crocodile-topped war ...
Travel
5 years ago

A lovely myth has it that on a visit to Basutoland for her diamond jubilee in 1897 Queen Victoria presented King Lerotholi Letsie with a blanket. But in fact Victoria never set foot in Africa or any of her many colonies: by 1897 the old queen would or could not even get out of her carriage for the jubilee service at St Paul's in London.

But Victoria's diamond jubilee that year did mark the release of the "Victoria England" brand of the blankets, which became hugely popular and remains so to this day. Before he adopted the blanket Moshoeshoe wore ceremonial leopard skins, which is why one of the first designs in the Victoria England range was the "Skin".

Early traders also gave or sold blankets to workers, including Basotho, in Kimberley after the diamond rush. The Fraser brothers Donald and Douglas, sons of a wool merchant in Ipswich in England, set up a store in Liphiring in Basutoland in 1877 to trade in blankets and other goods. By 1899 they had 12 stores and Frasers Ltd became part of the country's history.

The first blankets were manufactured by Wormald and Walker blanket mills in Yorkshire and exported to Frasers and other traders. When that company folded, production was taken over by AW Hainsworth, which still holds the rights to the Victoria England brand.

AW Hainsworth also made the Hudson's Bay point blanket for the Hudson's Bay Company trading in Canada and the US. That blanket became identified with the Navaho Indians, but perhaps not as closely as the Basotho blanket is with Lesotho.

The point blanket (named for short stripes which indicated the size while folded) had large stripes on a white background, but in Basotho blankets the accepted explanation of the vertical 1cm "pinstripes", which became an essential part of every design, was that they started with a weaving error and people liked it. 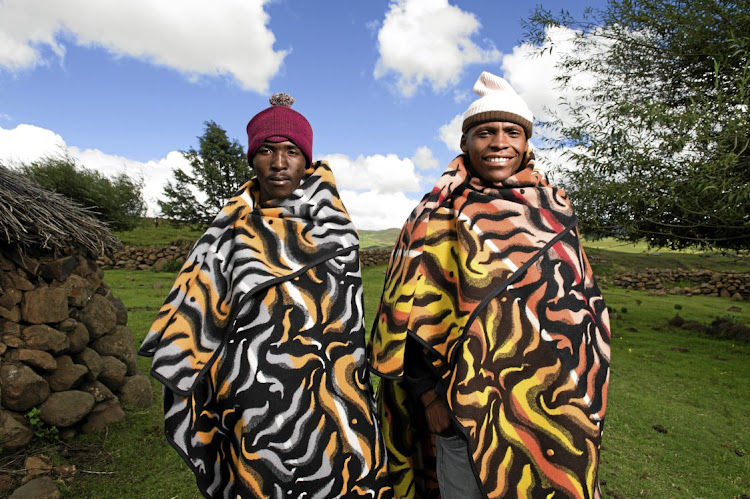 Two men who went for the Malakabe (flame) design. The blankets worn by Basotho are moving with the times, and are promoted to young people through the royal fashion fair ever year in Lesotho.
Image: Aranda Textiles

Since the early 1990s, after Frasers was bought out, the blankets have been made in Randfontein by Aranda Textiles. Marketing and sales director Tom Kritzinger started his career with Frasers. Like his father, who sold them, he is an expert on Basotho blankets. He points out that the Victoria England brand is one of the oldest in the world, of the same vintage as Coca-Cola.

Aranda owns what is now the most sought-after brand, Seanamarena. It was introduced by Charles Henry Robertson, the owner of a trading store in the Leribe district, in the early 1930s. Kritzinger says the most popular design in the brand is known as the Chromatic, derived from Robertson's initials CHR.

Kritzinger appreciates the importance of the blankets in Basotho culture: "Blankets are pivotal in their lives. Kobo ke bophelo, the blanket is life. Nothing is more beautiful. The Basotho people are preoccupied with blankets, from birth right through to death every phase is marked by blankets. The baby is received in a blanket, when they go through initiation after puberty there are blankets; when she gets married, the bride is wrapped in blankets and given to the groom.

"Blanket gifts are exchanged between the groom and the bride's family. When a woman is pregnant she cuddles herself into a blanket, symbolising the life that has formed.

"Blankets are used to cover traditional beer. They are interwoven into the fabric of society, and the Basotho are blanket people to the bone."

Kritzinger says although the Basotho blanket originated in England, "over the years it became a tradition that evolved and the Basotho made it unique, that's the beauty of it".

"How they became preoccupied with it and the meaning they have given to it is, for me, the beauty of that culture." 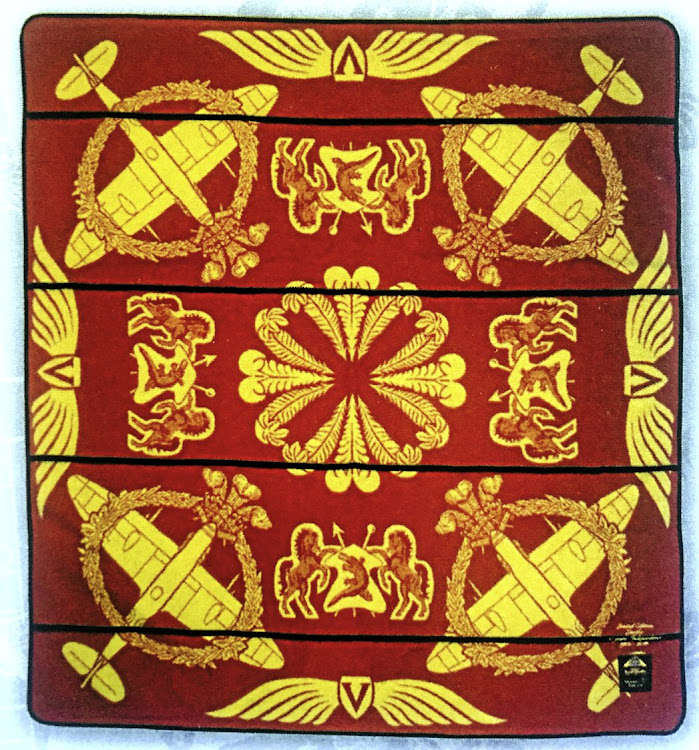 Basotho blankets have a number of links to World War 2.

Aranda produces a limited edition of the "Badges of the Brave" blanket, known as the NZ design, which depicts British empire regimental badges from the war, including one with the letters NZ. This has come to be regarded as short for Nazareth, giving it a Christian connotation.

Sometime during or after the war the Spitfire blanket was introduced. The people of Basutoland had collected enough money to pay for 25 Spitfire fighters for the Royal Air Force and they flew as the "Basutoland squadron" in the Battle of Britain. Last year Aranda issued a special limited edition of the Spitfire blanket (pictured above) to commemorate this and Lesotho's 50th anniversary of independence.

Towards the end of the war a textile factory in the Tuscan town of Prato was blown up by Nazi forces as they retreated. The town was liberated by, among others, South African troops under the command of Colonel Arthur Aiken, who persuaded the owners of the textile mill - three brothers - to start again in South Africa. Rodolfo, Giulio and Alberto Magni arrived in 1951 and started Aranda. The mill, still owned by the family, now covers an area equal to 11 football fields and employs more than 700 people.

The Victoria England brand is the only one still owned by AW Hainsworth in the UK, and Aranda has a royalty agreement to manufacture them in South Africa. All the rest were created and owned by Aranda, such as Motlatsi Khosana, created in honour of the birth of Crown Prince Lerotholi Seeiso in 2007. The Kharetsa brand features the spiral aloe only found in the Maluti mountains of Lesotho. Another brand was created in memory of the late Queen Mamohato Bereng Seeiso.

"In the days when I was still with Frasers the late King Moshoeshoe II once called me to the palace in Maseru and expressed his concern that his people were becoming too Westernised," Kritzinger says.

"He gave me some old design ideas, which Queen Mamohato only made popular after his death. There's the Malakabe, using one of the old designs which features flames, and we revived it."

Any new designs introduced have to first have the approval of the Basotho royal family.

Royalties earned from the sale of Victoria England brand blankets are not sent to England but are managed by Aranda purely for the promotion of the brand and to support charities; for example the company has installed or revived 50 "play pumps" at rural schools in Lesotho. These pumps are integrated with playground equipment so that when the children play they also pump water.

"Where some of the pumps fell into disrepair, the schools closed down," Kritzinger says. "We pay rent for advertising boards on the pumps, and that pays for their revival and maintenance."

The blankets are also moving with the times, and are promoted to young people through the royal fashion fair ever year in Lesotho.

"People like Louis Vuitton have looked at them and been inspired," Kritzinger says. "[Fashion designer] Thabo Makhetha in Port Elizabeth has done beautiful work, dresses, capes or jackets, and Unknown Union based in Cape Town has been granted the right to create clothing using the actual blankets. This is a modernisation by younger people who still recognise the beauty of the blankets but want to turn it into a fashion article, and I don't think it's wrong."

At 155cm x 165cm, the blankets are too small to be used as a bed blanket, they are made to be worn. Many people use them as rugs. At 90% wool, they are of the highest quality.

Thanks to the Africa Growth and Opportunity Act trade agreement with the US, Basotho blankets are now being exported and sold there with duty-free status. Some are even sold back to Britain. 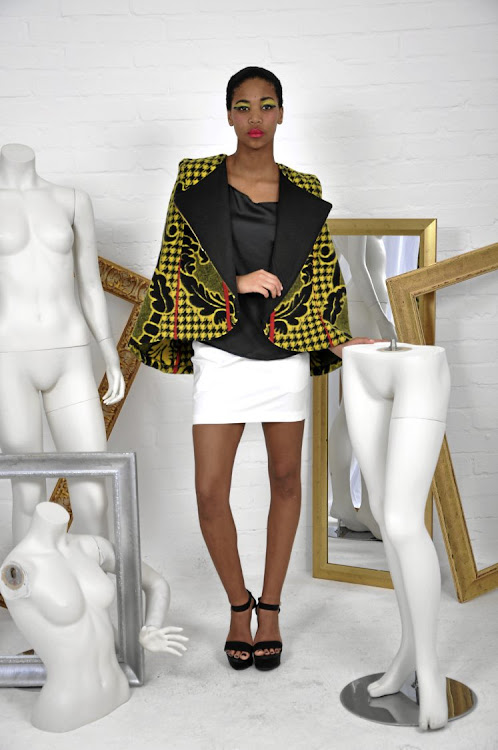 A cape based on traditional Basotho blankets, designed by Thabo Makhetha.
Image: Supplied

THE BLANKET BRANDS THAT DEFINED A CULTURE

The first Basotho blanket brand. It dates to 1897, one of the oldest trademarks around. The Basotho refer to the Victoria England as Lefitori. The collection includes Badges of the Brave, Crest, Crown, Spitfire, Malekable (flame), Skin (the traditional leopard skin) and Pelo ea Morena (heart of the king). Badges of the Brave pays tribute to regiments from the British empire and the Basotho soldiers who served in World War 2.

The crown jewel of Basotho blankets, these date to the 1930s and a store in Leribe. Seanamarena means "to swear by the chiefs". They include Chromatic and Poone, which depicts a maize cob. 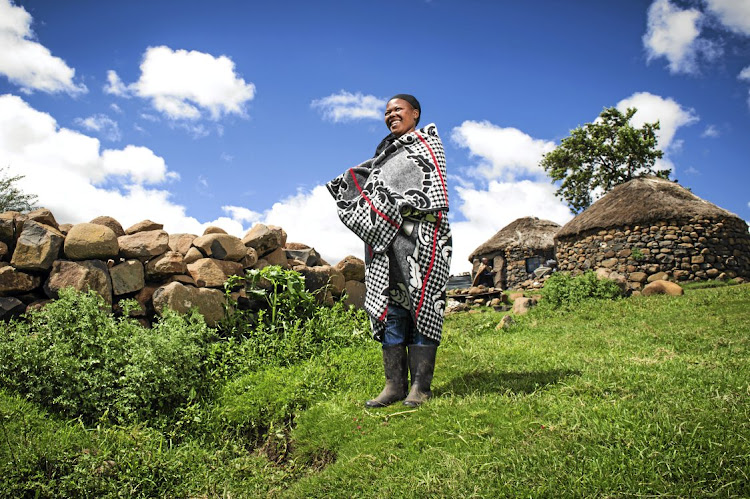 Created to honour the birth of Crown Prince Lerotholi in 2007. The design displays an elaborate collection of hearts on a houndstooth background. The heart symbolises the love, respect and loyalty that the Basotho nation has for its monarchy. Motlatsi means "successor".

This design (pictured below) is named after the spiral aloe which is only found in the Maluti mountains. The aloe is featured prominently in the centre of the blanket and is surrounded by the iconic Basotho hat and Basotho shield. 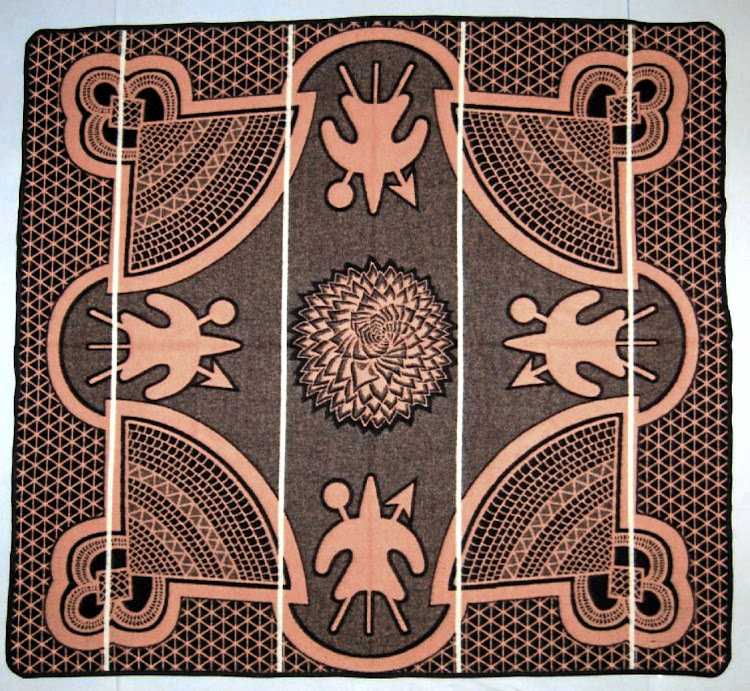 Named for a home of Britain's queen. Also known as Mohodu after the Sotho word for the inside of an animal's stomach, which it apparently resembles.

The older Motlotlehi wedding blanket no longer exists, and was replaced by the Lingoetsi as a bride's blanket.

This article was originally published by the Sunday Times.
Read the original article here.

SA designs a breath of fresh air for famous Swazi ...