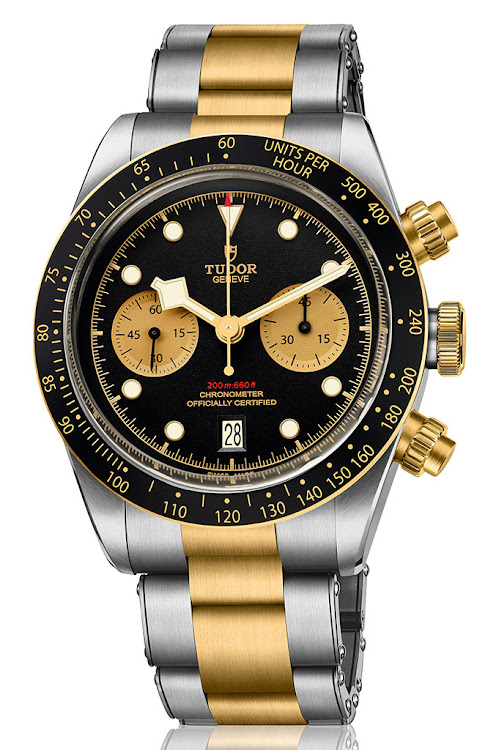 When the 41mm steel Tudor Black Bay Chronograph first launched at Baselworld in 2017 it was an instant hit. Winning the “Petite Aiguille” prize later that year at the Grand Prix de l’Horlogerie de Genève, the luxury watch industry’s equivalent to the Oscars, for the best watch with a retail price between 4,000 and 10,000 Swiss francs (R58,000-R145,000), also reaffirmed its exceptional value proposition.

In terms of design, this watch combines the diving identity of the Black Bay with its characteristic “snowflake” hand, and the technical, sporty functionality of a purist’s chronograph. The overall shape, as well as the domed dial and crystal, come from the first Tudor divers’ watches with their distinctive “Big Crown”, a feature of the famous reference 7924 watch from 1958, also the first Tudor watch to be waterproof to 200m.

Totally on trend, this winning formula receives an update in two-tone metal treatment — popular in the ’70s and ’80s and making a comeback this year. The new Black Bay Chrono S&G (steel and gold) has similar design elements to the Heritage Black Bay S&G (reference 79733N), also launched in 2017, but its extra highlights are a step up. Its two-tone dial features champagne gold sub-dials on black, gold pushers, a contrasting gold tachymeter scale on the bezel, gilt chapter ring, and gold-trimmed hands. All gilded aspects of this model have a satin-brushed finish to give a warmer tone to the yellow gold. This year is also the 50th anniversary of the “snowflake”, adding to its vintage look and feel.

Tudor’s update for the delicate wrist

The bezel and the first centre links of its bracelet are made of 18kt solid yellow gold, while the other links and the crown are made using a gold-shell technique, where a piece of solid gold is folded over a core of stainless steel, guaranteeing far better wearing.

The Black Bay Chrono S&G is powered by a Cosc-certified manufacture Calibre MT5813, with column wheel mechanism, vertical clutch, silicon balance spring, and a power reserve of 70 hours. The Calibre MT5813 is a self-winding mechanical chronograph built on a Breitling B01 base calibre, with a high-precision regulating organ developed by Tudor. As part of the Black Bay divers’ family of watches it is also waterproof to 200m.

For those of you on the road to one day owning a Rolex Cosmograph Daytona, the Tudor Black Bay Chrono S&G has all the attributes of a star contender to accompany you on that journey — at half the price.

In the running for best diver’s watch at this year's Grand Prix d’Horlogerie de Genève, is a rather stealth-looking black all-ceramic Longines ...
Watches & Jewellery
2 years ago

Wanted's top 12 picks of the Only Watch luxury charity auction