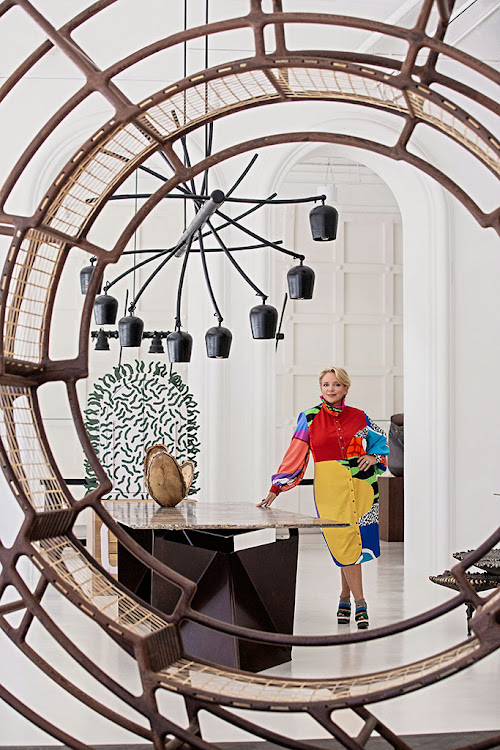 Mid the riot of high-end furniture on show at Design Miami last year — the chaises from Caracas, the mirrors from Manila — a South African stand got a lot of buzz. At it, the world’s creative cabal oohed over Cape Town-based Zizipho Poswa and Andile Dyalvane’s ceramics, aahed over the crazy cabinetry of Joburg’s Dokter and Misses, and climbed into Porky Hefer’s primary-coloured hanging pods. Actually, the latter had to be nixed — too many people wanted to disappear inside them.

This February, in a booth at the Investec Cape Town Art Fair, there were similar goings-on. Like moths to a curated flame, the who’s who of SA’s art set — plus all those with money, style, and sense (that elusive trifecta) — gathered.

At the centre of both gatherings was Trevyn McGowan, the CEO and co-founder of Southern Guild. In both instances, the effortlessly cool blonde with the big smile was there to display the collectable design and art her brand represents.

For 20 years, the dynamo and her husband/business partner Julian have been running a business with South African design at its core. “Design makes everything better,” she said as we sat down on a custom-designed Dock sofa — which is one of the pieces on sale in the McGowans’ Southern Guild Gallery in Cape Town. “If you’ve got a shelter and it’s not designed properly, it’s terrible. There isn’t one thing, even a meal on a plate, that doesn’t benefit from design thinking,” she adds.

A reflection on Design Miami 2019: from the sublime to the ridiculous

This belief has become her life’s work. In the early 2000s she started Source, which distributed South African products (everything from candlesticks to tables) to the likes of the Conran Shop in London and ABC Carpet & Home in New York. It was a big deal — the world, it turned out, really wanted our goods. The couple diversified, started doing more.

“We went from a tiny team of six people to 37 people, eight leases, 12 brands. We were doing all sorts of things. We hired without real focus. It was a very tough lesson,” McGowan said candidly of the business’ development. “But every bit of experience has been working towards our really understanding who we are, what’s important to us, what’s meaningful, what works, what the world needs; and so the past 18 months have been incredibly exciting and rewarding.” What she was referring to was Southern Guild’s past year and a half of real focusing on collectable design.

“What’s collectable design?” you ask? When McGowan got into this realm, she didn’t know either. Broadly, the term covers objets and furniture that’s collectable, like art — bespoke, one-of-a-kind, or limited-edition pieces, items from particular eras and by particularly popular designers (new and old) that are growing in value, or hopefully, will grow in value.

“We started to meet people who we really loved and got on with, and their product didn’t really fit a category. So, in 2008, we said, ‘Wait a minute, there’s a collection of work here,’ without even knowing about the collectable design category,” explained McGowan. “We didn’t have a business model for it. It was just a case of inviting 30 of our favourite people to do work that had to be the best thing that they’d ever made, the biggest dream — it didn’t matter how expensive it was, how audacious it was.”

The work the artists produced was exceptional. The idea was a go. Southern Guild was accepted in its second year of applying to show at Design Miami and has been there since. This year, it debuted the abovementioned stand at the Cape Town Art Fair, showing both design and art.

It was just a case of inviting 30 of our favourite people to do work that had to be the best thing that they’d ever made, the biggest dream — it didn’t matter how expensive
it was, how audacious
it was

And big art galleries that only had artists are taking on designers,” said McGowan of the international scene. One reason for this is certainly the growing value of the niche. It’s an investment market on the up.

As McGowan put it: “Globally, art is a much more established industry, a much bigger business than collectable design. There are only 50-odd galleries in this category, but it’s one that is very fast-growing in terms of price escalations, in terms of seriousness, in terms of notability; because everybody understands that, actually, it’s about getting in early.”

But in South Africa, the concept isn’t something we’re that familiar with — beyond Southern Guild’s offering, that is. It is a good opportunity to get in on the ground. “When we started, our sales were 80% international, 20% local. But there’s a very strong growing local audience who does understand,” said McGowan.

There’s been a recent spike in interest from major museums. The Los Angeles County Museum of Art acquired two large ceramic sculptures by Zizipho Poswa last year. A huge solo by one of Southern Guild’s artists is planned at the National Gallery of Victoria’s Triennial in Melbourne later this year.

In one line, she sums up the potential: “Somebody like Zizi Poswa — there are just no works available. We can’t keep up with the demand.”

Graham Wood speaks to him about winning the 2020 Standard Bank Young Artist award for Visual Art, the past, and the future
Voices
2 years ago