Graham Wood speaks to him about winning the 2020 Standard Bank Young Artist award for Visual Art, the past, and the future 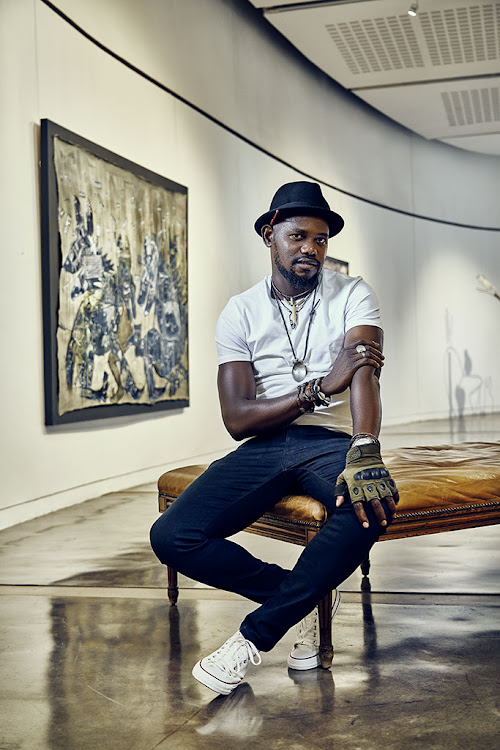 2020 Standard Bank Young Artist (SBYA) for Visual Art, Blessing Ngobeni, has been compared to Miró, Basquiat, and even Picasso. The dreamlike (or nightmarish) quality of his canvasses also suggests surrealist roots. His more direct local artistic lineage, however, might include the likes of Dumile Feni — not only for his twisted figures and complex flattened compositions, but also for the way in which he managed to express the connection between impersonal political systems and individual pain. Or you might even see echoes of Norman Catherine, whose bold colour palette and combination of eerie distortion and dark humour animate almost cartoonish figures charged with base motivations. None of them is off the mark, but, as Ngobeni himself points out, the more people you’re compared to, the less you’re actually like anyone else.

Individuality and independence are cornerstones of Ngobeni’s character as much as of his art, and much has been made of the way in which his discovery of art in many ways rescued him from a depressing destiny of crime and prison time (more on this later.)

While elements of that narrative might be accurate enough, what’s at stake in Ngobeni’s work has much broader significance as the personal unfolds into the political. One of the most important aspects of his art, he says, is its search for a modern South African aesthetic: a way of looking forward; of freeing oneself from the past; of being truly oneself.

In the broadest sense, his work critiques the ongoing oppressions and corruptions of post-democratic SA. He’s disillusioned with what he calls the “dumpsite” of democracy, which he worries has failed to overcome the inequalities of the past, and may even perpetuate them. He’s as disillusioned with the entitlement of the born-frees as with the predetermined and limiting patterns of progress that conventional education seems to lay out as a model of advancement.

“We need something new,” he says. Art, for him, has the power to break down walls, explode conventional categories, and jettison the “lies about our history”.

The style he has developed — neither abstract nor figurative — doesn’t fall into conventional art-historical categories. “I call them non-existing figures of humans,” he says of the human and anthropomorphic characters that populate his canvasses.

As much as his compositions refuse a single point of perspective, the images he creates don’t represent a single emotion, event, or point of view, either. There can be moments of rage and comedy right up against each other. “The anger the happiness, the love, the struggle of the political landscape in Africa… are fused in one thing,” he says.

He explains another, invisible, dimension of his work. As part of his collaged elements, he often cuts out images of artworks by other artists and paints over them. “I privately collaborate with almost every artist in the world,” he explains. “What I’m trying to do there is also to visually unite these artists. This is how I honour them and respect them. And surprisingly, it’s not seen with the naked eye.”

It’s metaphor for how he deals with the relationship between the past and the future — a topic that has personal relevance for him as much as it has a broader political imperative. 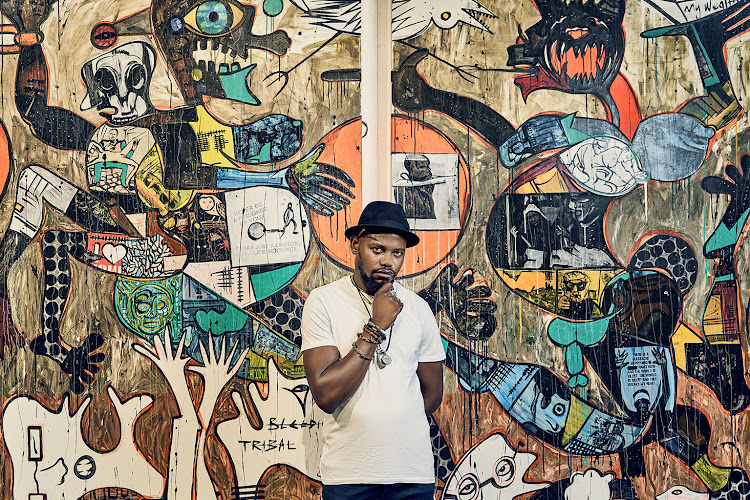 The emancipatory narrative of his life has become a kind of burden, as much as he’s managed to transcend it. It’s a tale he says he’s had to trot out for just about every journalist who has ever interviewed him.

It goes like this: he was born in Tzaneen, Limpopo. His parents split up when he was very young and his mother left him in the care of an abusive uncle when he was just five years old. He ran away and lived from hand to mouth in the bush for another five years before being reunited with his mother, but ran away again, this time to Johannesburg. As a teenager, he ended up spending six years in jail after getting involved in petty crime and robbery, and that’s where he found art, through the Tsoga (Wake Up) Arts Project.

He recalls what it represented to him: “I want to be who I am, not the other person.” Art was a way for him to realise a kind of truth about himself. And now, for him, it’s become a way of finding a language or aesthetic that allows others to free their minds and become who they really are.

Awards followed, including the Reinhold Cassirer Award in 2012 and now the SBYA. The ongoing demands on him to dredge up his past, however, can be “annoying”. “Why can’t we talk about now?” he asks. One gets the sense that he’d like his childhood to be like those buried fragments on his canvasses — there, inevitably, but not the subject.

“I have to forget about it so that I can move forward,” he says. Besides, he adds, he can no longer tell his story with the rawness that he could some years ago.

“Let’s face what is today,” he says. “Let’s make a reality of today so that tomorrow our future can balance.”

Moira Mdakana chats to Richard Holmes about what it means to be a concierge in today's tech-dominated world, and the power of personal relationships
Voices
2 years ago

From bush to boardroom: Beks Ndlovu is forging his own path in the safari industry