There was a time when luxury was defined not by logos or advertising campaigns, but by the hours, skills, and materials invested in a product. Conrad Hicks is set on bringing back those values “Blacksmithing is a total fusion of technology and art,” says Cape Town-based artist, toolmaker, and blacksmith Conrad Hicks. After nearly 30 years of working with metal, Hicks is possibly South Africa’s most accomplished blacksmith, and his work moves fluidly between the realms of craft, design, and art.

Hicks is the first to admit he does not work in a typical way. “You get technical smithing, which I do and which I enjoy,” he says, referring to the disciplined method in which the likes of machine parts, tools and knives are made.

“These processes and forms inform another way in which I work, in which I don’t plan things,” he says, describing the more organic process from which his sculptural works emerge. “These pieces carry a message, my fingerprint, or what I want to say, and I often don’t know what that is until it’s there. I suppose you could call it expressionist forging.” 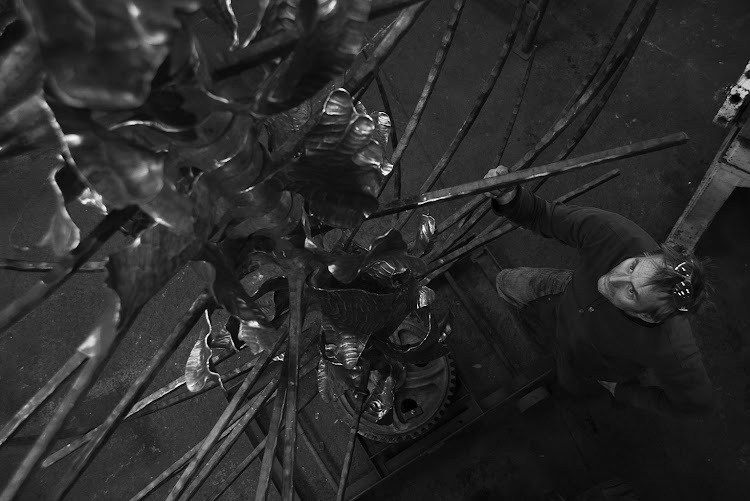 Whether he’s working on a large-scale sculpture or a small knife, Hicks is totally absorbed in his work. “I wear earplugs and listen to music and work. Blacksmithing involves all your focus, body and mind. You have to be totally in tune,” he says.

For Hicks, that is the beauty of his work. “When I discovered forging metal, I felt this is what I was meant to do. It’s a physically exhausting process: it leaves me tired, having worked and focused the whole day, so it fits the way I am perfectly I need my work to tire me out,” he says.

Hicks’ one-of-a-kind pieces have been exhibited and sold around the world, and whether it’s a pair of tongs or a sculptural bench that emerges from his workshop, every piece encapsulates his belief that beauty, function and form can’t ever be separated. “When I forge in an intuitive way, what I’m looking for is a form that is a total fusion of functionality and expression. That’s when I can say it is just right,” he says. conradhicks.com

There was a time when luxury was defined not by logos or advertising campaigns, but by the hours, skills, and materials invested in a product. These ...
Voices
4 years ago
Next Article
Commenting is subject to our house rules.
© Wanted 2022 - If you would like to reproduce this article please email us.