You've seen it all

Tourism and shopping combine in a city of epic proportions 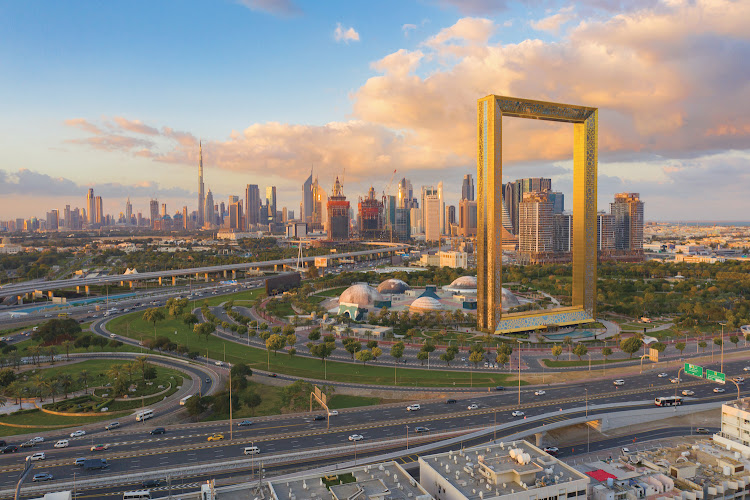 A carefully curated oasis, a fever dream of opulence, self-determination, and focused society-building — there is nothing quite like Dubai. The city that has transcended the definition of a city, Dubai is an experience of global proportions, an idea crafted by billionaires, architects, and dreamers in an absurdly short amount of time.

My trip begins, as all trips to the Emirates should, in the business-class standing bar on an Airbus A380, with a glass of Moët in hand and a cosy bed awaiting me. Seven hours of champagne-induced slumber later, I am chauffeured to one of the 100 000-plus hotel rooms in the city, in Emirates’ private fleet — Mercedeses for first-class passengers and BMWs for business class.

The city’s economy is based on real estate and tourism, and it’s no wonder that it is home to manifold world firsts, world records, and world-renowned hotels, from the tallest four- and five-star hotel to a gold-plated seven-star luxury escape at the Burj Al Arab. There is something for all manner of tastes, but not necessarily all budgets. Here, shopping is coupled with tourism, and experiences range from the largest mall in the world, which houses a diplodocus skeleton, to a mall with one of the largest indoor ski centres in the world. Global fashion houses are represented with gorgeous showrooms.

At the height of the construction boom, a quarter of the world’s cranes were in Dubai, engineering an air-conditioned city that has burgeoned into the world’s fourth-most visited destination, hosts 40% of the world’s physical gold trade, and is home to over 215 skyscrapers, many of which have broken records. As much as the physical engineering has elevated skylines, the feat of social engineering is just as breathtaking and encompassing.

If you think you’ve been there, seen it all and got the T-shirt — here are three unforgettable new lodges to tempt you back to visit Namibia…
Travel
1 month ago

Recent years have seen the city catering to Western tastes, and its demographics are 85% foreigner: a mixture of wealthy expatriates, tourists, and side-lined South Asian workers — money rules. Unlike the other six emirates, Dubai — in full promotion mode at the recent Expo 2020 Dubai, which had been postponed due to Covid — has a relatively liberal society where alcohol, skimpy clothes, and dancing are privileges that can be bought and displayed in the wealthy districts and hotels.

Views are the order of the day, with breakfast, lunch, dinner, and coffee in street-side cafés coupled with craned necks peering at the world above the ground. Canapes and aperitifs can be had in rooftop bars, hotel lounges, and restaurants that lean into the abyss of the world 300m or so below. Experiencing the best view, a panorama of old and new, requires a visit to the Dubai Frame, a picture-perfect, cut-out polaroid of glass, steel, and glistening gold. The designer, Fernando Donis, created the perfect metaphor of the city — seeing Dubai as already clustered with emblems, he chose to frame the city rather than add another one, using a void to celebrate Dubai’s progress while constraining it at the same time.

Dubai is a feast for the senses, a culture shock, and a must-visit for all lovers of luxury

The Museum of the Future, a striking technological monument housing innovation labs and exhibitions, is a new landmark and audacious architectural achievement, a calligraphy-strewn, torus-shaped celebration of development. Dubbed “the most beautiful building on Earth”, the elliptical structure has no columns to support itself, instead relying on thousands of diagonally intersected steel tubes in its outer frame. It was officially unveiled on the palindrome date of 2/2/22 — symbolism and statements are never far off in this city. The 29 700m2 building is inscribed with words of hope from Dubai’s ruler, Sheikh Mohammed bin Rashid al Maktoum that allow natural light to dart into the building by day. At night, it is lit up by LEDs. The museum is a striking symbol of creative progress.

In Dubai, the past, present, and future of society and the city are constantly contextualised and emphasised. Tourist attractions — the constructed islands, viewing decks, and malls — stress its breakneck development. Moving out of the air-conditioned, sky-scraping city, I take a short Land Cruiser drive to the Arabian desert, a popular dune-hopping, sand-drifting exploration. The scene is scored by local music and orchestral numbers, while the actors are falconers, camel riders, and fire dancers, amid the soft chatter of families and couples dining on Persian rugs while watching the festivities unfold.

Walking across the dunes, whether to watch the sunset or to career down them on a board, uses half of the calories consumed on the trip and sets me up for the next day of beachside cocktails, island hopping, or Mount Olympus-level jacuzzi-ing.

On my final morning, I am picked up promptly from the hotel and jet off to check-in, where the state-of-the-art scanning system allows you to access lounges, bypass boarding lines, and avoid human contact altogether. After a stare-down with an AI flight attendant, I enter the Disney World of airport lounges, offering a Moët bar, an ice-cream bar, three restaurants, and bespoke showers. Dubai is a feast for the senses, a culture shock, and a must-visit for all lovers of luxury.

Emirates, the national airline, has ties to the experiences, hotels, and excursions available in the country, providing a one-stop platform for the organisation of your trip, whether for work or play.

Visas: South African passport holders should arrange a tourism visa before their trip, through Emirates and other relevant airlines, the hotel where they’ve booked. or their travel agent.

• Declan was hosted by Emirates airline

A city for all seasons

In Milan, you come for the fashion and stay for the food
Travel
1 month ago