The Italian brand showcases its latest innovation at the Milan Design Week, using copper and nano-technology to create designs that are unique in every environment 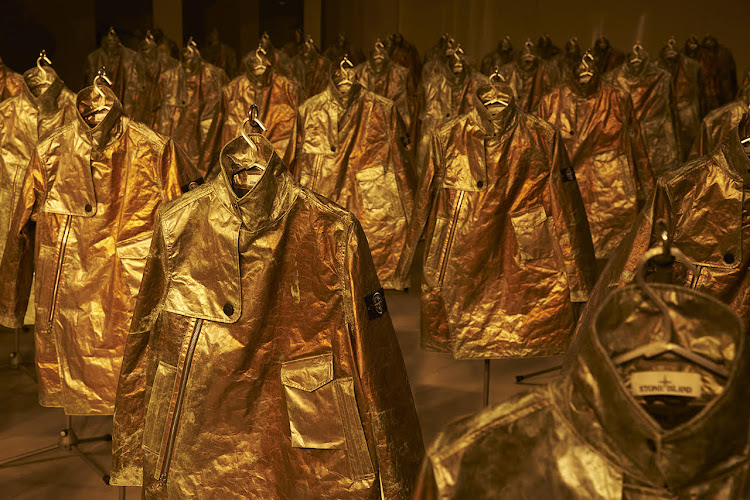 Stone Island’s PrototypeResearch series began in 2016 - the native limited editions are garments featuring fabrics/treatments born from research and experimentation that are not yet industrialised. The collections can be as limited as 50 numbered pieces and showcase the brand's dedication to being on the cutting edge of textile and design innovation, true to founder Massimo Osti’s legacy.

The full collection, being the fifth project, was on show for the first time in this week’s Milan Fuorisalone. For Prototype Research_Series 05, an iconic raso-cotton trench coat has been bonded with a nanometric copper layer to non-woven fabric, attempting to explore the natural oxidation and properties of copper. The copper layer has been deposited onto the fabric through a technique called physical vapour deposition. Each jacket will change as it is worn and differences of conditions, such as humidity, air toxicity and climate, will make each jacket unique.

The result is a military display of iridescent jackets, a moving theatrical score and light-play that distorts reality. The copper-cum-camouflage material became unbonded since the coats were made, ‘eaten by the same oxidation,’ meaning the pieces cannot be sold. The installation, more performance art than a clothing exhibit, is made more meaningful by the failure in experimentation, a first step rather than a conclusion.

This is the unfiltered story of an unfinished research process, says Stone Island’s president and creative director Carlo Rivetti, adding that, “each step has taught us important things which will be important for the future, regardless of the goal achieved.”

“This study began in 2019 with the intention of it being shown at the Milan Design Week in April 2020, which was later cancelled,” said Rivetti. “When the garments were returned to us in spring 2021, their oxidised appearance was magnificent, but the adhesive between the non-woven fabric and the cotton satin was unpredictably ‘gone,’ ‘eaten’ by oxidation.”“The result did not reach the target of resistance and solidity we have. I often tell of the ‘mistakes’ that come up when daring to go beyond the known, the tested, the conventional,” he said. “This is the unfiltered story of an unfinished research process, an enrichment of the company’s experience and culture. Each step has taught us important things which will be important for the future, regardless of the goal achieved.” said Rivetti.

The installation, designed by Ken-Tonio Yamamoto, with the light designer, Marco Rizzuto, was on show for the Milanese Design Week. In Zona Salore, one of the many design districts of Milan, the showcase was held at the Stone Island showrooms and was a delicate display of sound, colour and light. The garment’s copper properties flexed and manipulated the stimuli around them, an awe-inspiring sight for anyone who celebrates design, innovation and experimentation, not just the brand with the compass patch,

Tiffany & Co frame the Carters with a rarely seen Basquiat painting, to acclaim and contempt
Fashion & Grooming
10 months ago

South Africa’s shopping carts are going digital and phygital
Fashion & Grooming
10 months ago
Next Article
© Wanted 2022 - If you would like to reproduce this article please email us.