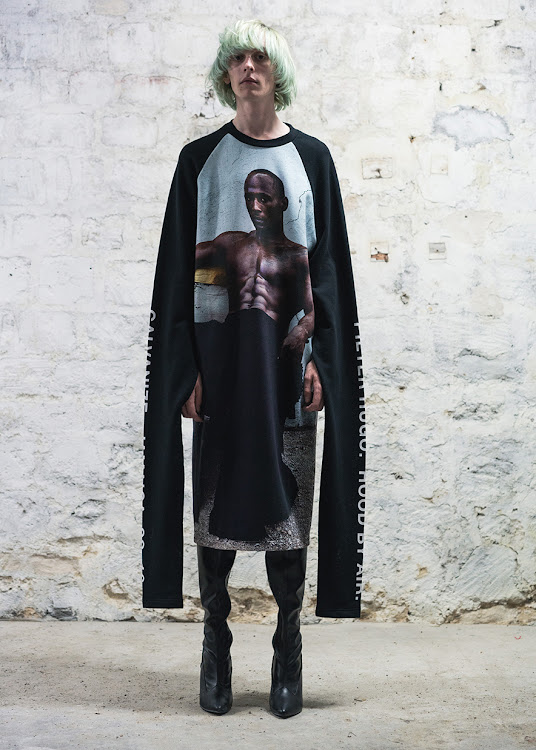 On Friday, December 2, MoMA PS1, an outpost of the Museum of Modern Art in New York, played host to fashion label Hood by Air (HBA) at Miami's Art Basel.

A sea of fans, armed with smart phones, mixed with members of the HBA collective at the Delano hotel, dissolving into a thick mist of smoke machines and weed. 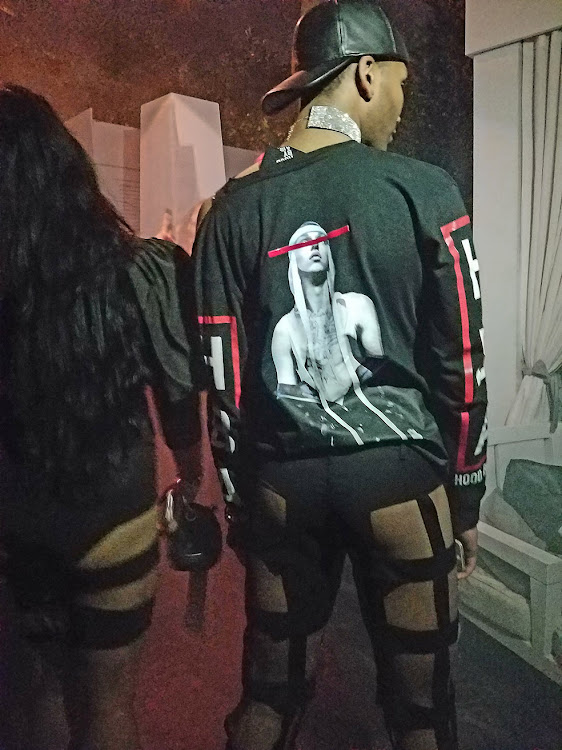 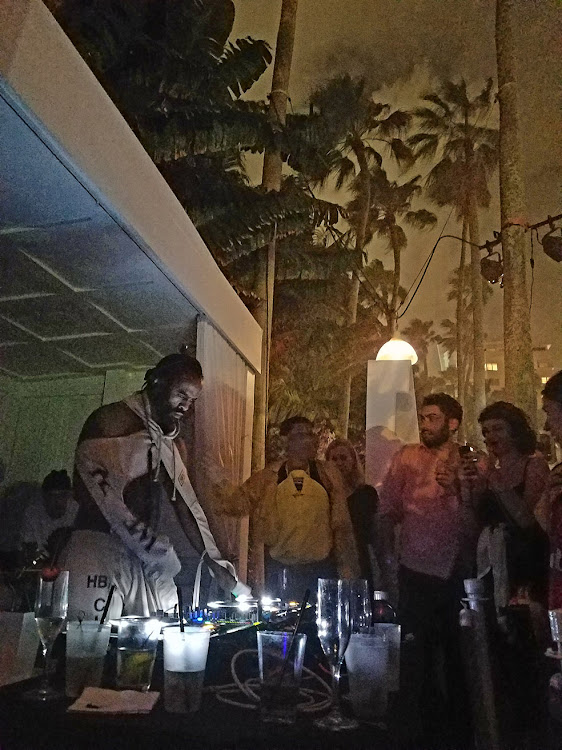 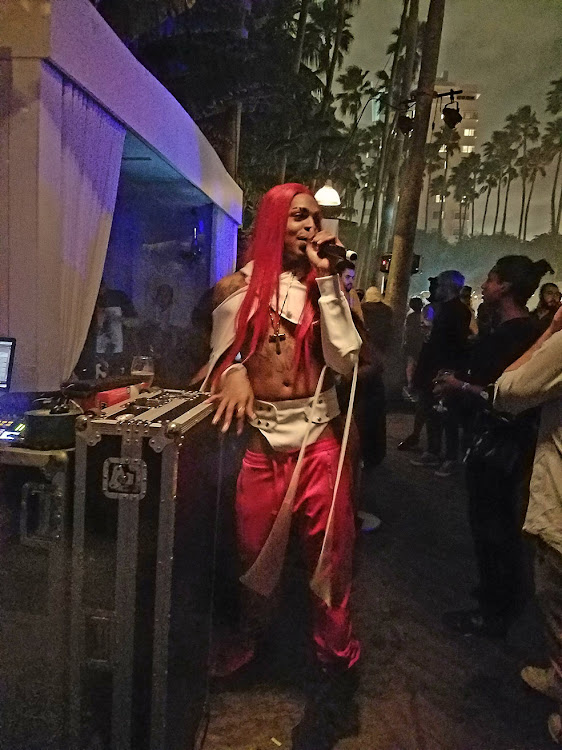 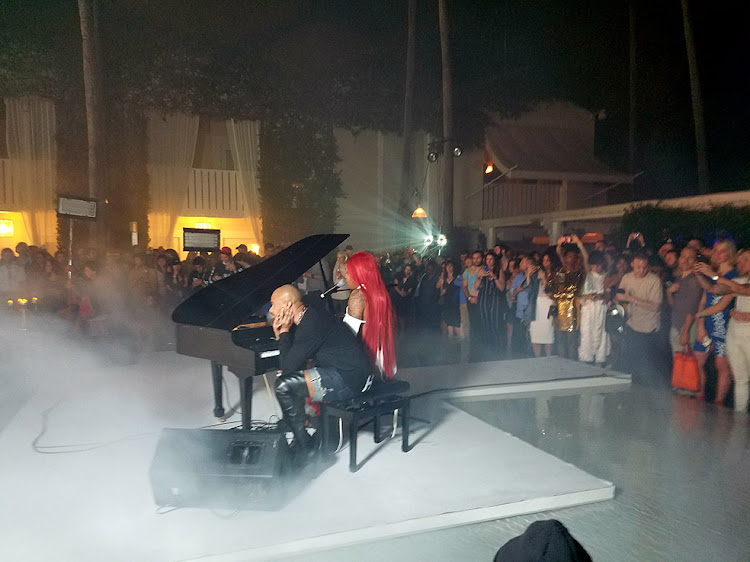 Ian Isiah, the Brooklyn-based R&B singer, sat perched at a piano on a small stage floating over the pool, wearing a HBA white cod piece, like a Star Wars stormtrooper, Rapunzel-length red hair blazing and gold grills glinting, Designer Shayne Oliver, in thigh high leather boots, branded t-shirt and denim shorts, gazed on intently then submerged himself into the water.

Once the solemn procession of local street and Instagram-cast models in iconic runway collections had waded into the water, the shapeshifting 24-year-old rapper Princess Nokia put a spell on the crowd, rapping 'Brujas' (meaning witches in Spanish), adding ‘bitch-craft’ to the urban dictionary before ending her poolside performance by disrobing down to a swimsuit and thin white veil and submerging herself — the symbolism in the choreography referencing how Catholicism in the Caribbean has mingled with Santeria to create a combination of Catholic religion and voodoo, which has been inherited into the new world via slavery.

Homeboy Hugo — absent from the show — is most famous for his series on Nigerian hyena handlers. Snippets of his work have also been culturally appropriated — echoed, most notably by Beyonce and Nick Cave in their music videos. His albino series has also no doubt reinforced the career of Shaun Ross, the first male albino pro model and part of the HBA collective.

Some people got their knickers in a knot because Hugo photographed Jamaicans, including statuesque, ripped Jamaicans modeling HBA threads for the collaborative book PH & HBA. True to the HBA way, the models were all street cast — HBA makes a conscious effort to invite outsiders in, finding beauty in the bizarre. In some of the shots PH & HBA gives a face to Jamaica's "gully queens" — LGBT men and women that would otherwise have been forced into hiding and who now, as a result of the project, strut the pages of Vogue  this month. 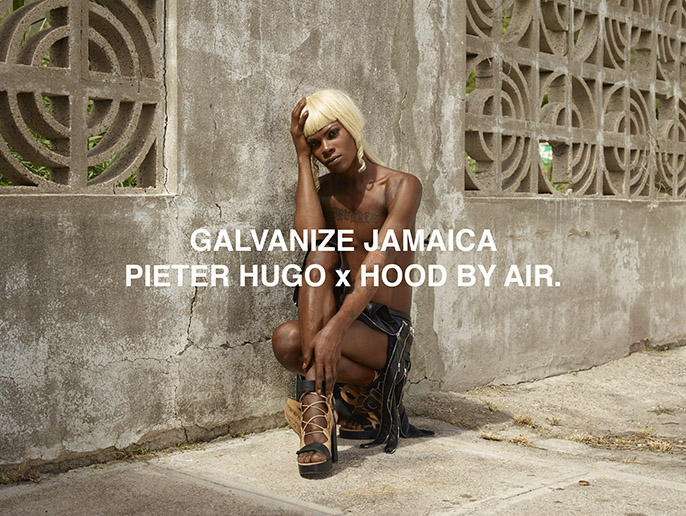 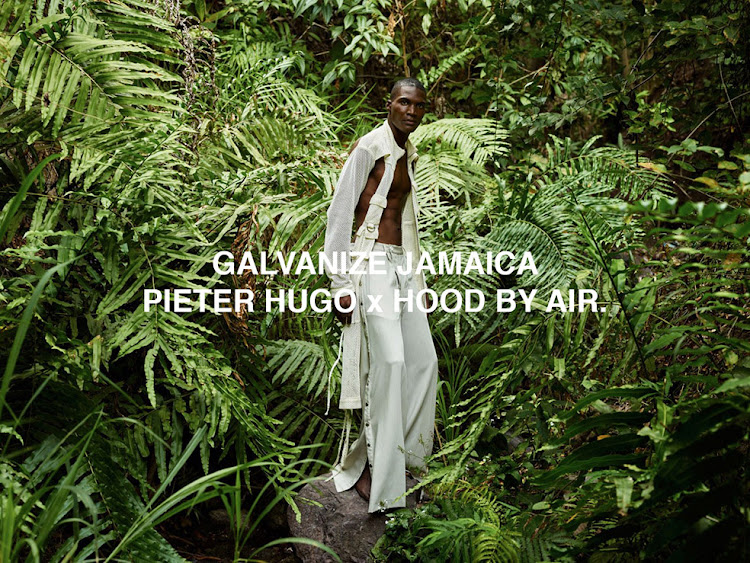 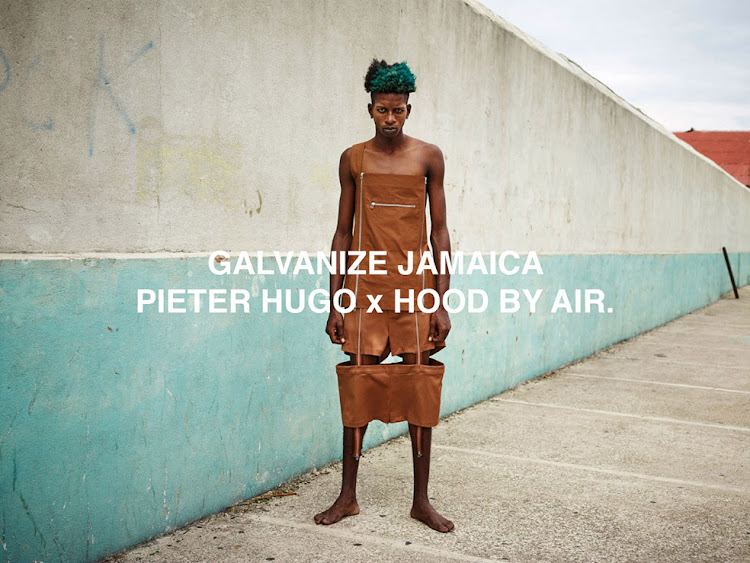 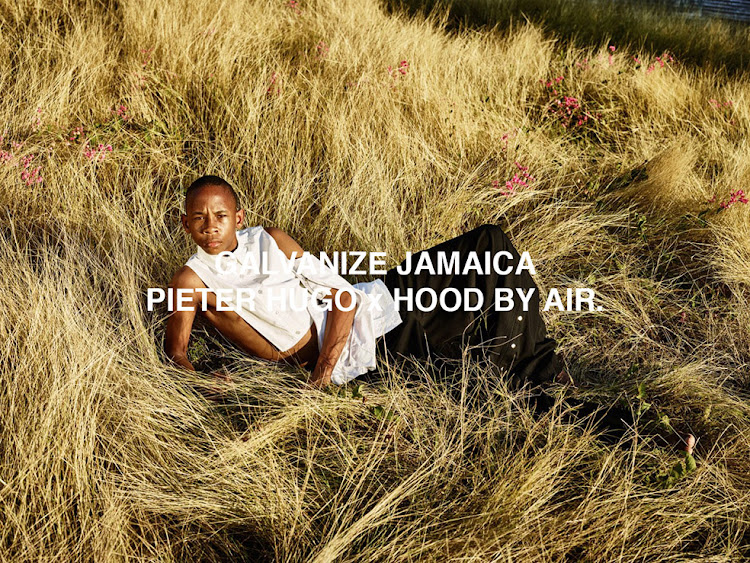 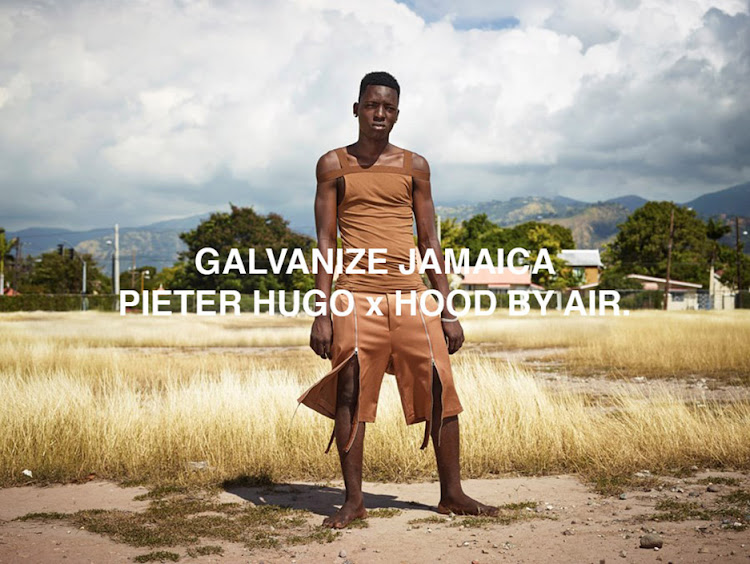 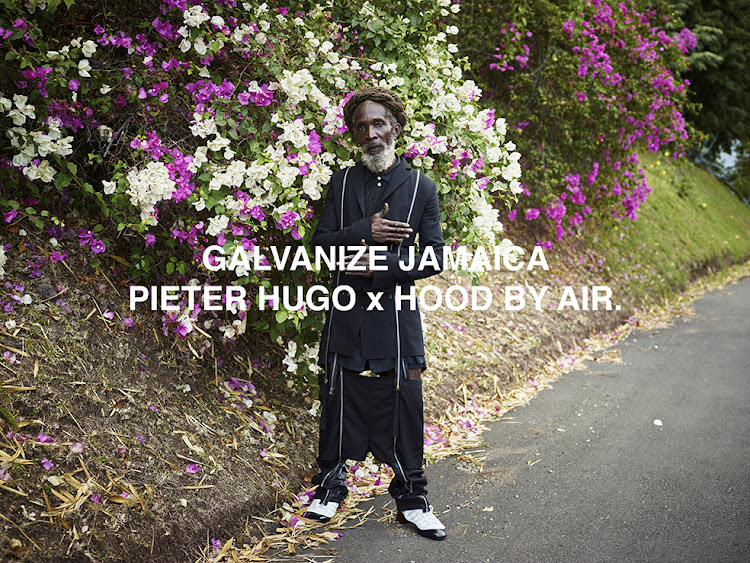 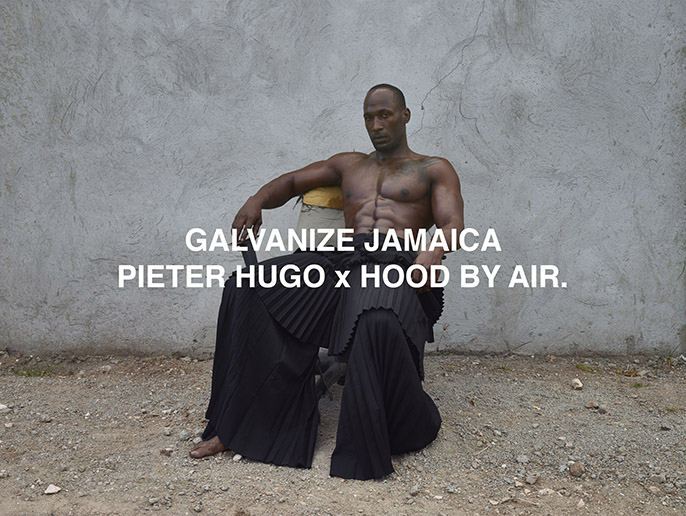 According to Hugo, the models used were "into the idea and got paid".  Even so, by midyear, a small troll army was up in arms about Hugo for displaying black bodies as "savage fashion", suggesting that the revealing images would put the lives of the Caribbean island's LGBT communities at risk — homosexuality is against the law on the deeply conservative island. But those who moaned clearly didn't get their facts straight, nor do they understand the "trill" crew Hugo collaborated with. (Trill: a hip hop term for well respected, a combination of "true" and "real").

Hugo approached the PH & HBA project as a photographer who frequently shoots luxe fashion. He happened to be in Jamaica at the time, shooting a Paul Smith editorial, with fashion editor Carlos Nazario, his partner in crime at HBA. In true HBA style, the photographer and editor piggy-backed on the Paul Smith shoot pooling resources, says Hugo. Together they street cast for models in Kingston, "guerrilla-style" and wound up with "a diverse crew of porn stars, body builders, models, construction workers and LGBT 'gully queens' who typically only come out at night," explains Hugo. Far from considering himself an activist, Hugo says he was "in part inspired by Jamaican author Marlon James's book A Brief History of Seven Killings and hopes that the project’s exposure "will encourage dialogue about homosexuality of which no mention is made in Jamaican culture".

The HBA street silhouette, formalizing sloppiness is distinctly New York, with a uniquely super-animated edge. "Butch for street, smart for school, glam for club, proudly ghetto and proudly elite," as described by Oliver. HBA is run and owned by LGBT men and women of Caribbean descent. Hugo says he only met the mastermind Oliver, who graduated from New York's Harvey Milk High School, much later and happens to be "both inspired and terrified of him".

Inadvertently, the fascination with the half-dressed "thug" silhouette presented in PH & HBO fits into the HBA ethos. After all, if we all stuck to the rules, French photographer Jean Paul Goude would have photographed French poodles or men wearing berets on bicycles smoking Gitanes with baguettes under their arms, and most certainly not Grace Jones a la Jungle Fever.