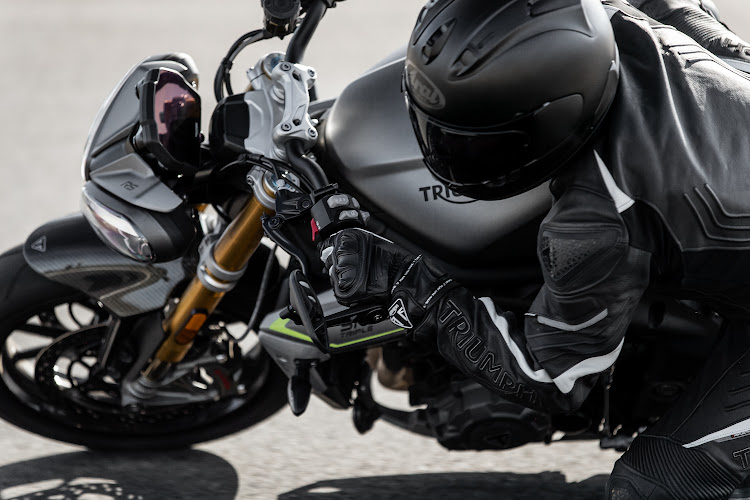 For the average person with a cursory interest in motorcycles, Triumph Motorcycles is synonymous with a classic, old-school café racer design aesthetic. This perception is reinforced by the evolution of the Triumph Bonneville, which, even as it has been developed to include modern technological and engineering trimmings, hasn’t strayed too far from its stylistic roots.

Yet, for those in the know, Triumph was one of the first to jump into the world of naked bikes with its 1994 Speed Triple, a motorcycle that works for the road as well as it does for the track. The naked is the sweet spot between sitting upright and overly tucked position of a superbike.

Triumph is about more than classic heritage. To be honest, as a relatively new motorcycle enthusiast, having read that, since 2019, Triumph has been the official engine suppler to the FIM Moto2™ World Championship, I didn’t quite get it until I had the chance to try out the new 2021 Triumph Speed Triple 1200 RS. Not having ridden previous iterations of the Speed Triple, I had nothing to compare it to, which, in a way, made for a more open-minded overdue ride to the Vaal, considering that, with lockdown, I couldn’t cross provincial borders.

The clunky and charismatic new cruiser bike harks back to bike design of the 1930s
Cars, boats & planes
1 year ago

Taking the highway one way, and back roads back, gave me the opportunity to experience the Speed Triple fully and what an experience it was. In developing the bike with a focus on road while still ensuring that it performs on the track, Triumph states that the three key elements where chassis, ergonomics and engine performance. But, first, design because aesthetics is as important to me as performance — call me vain, but it is what it is.

The Speed Triple comes in either the matt silver ice option with silver and yellow graphics, which I lean towards, and sapphire black option with red and silver graphics. It has a compact tail unit with rear lights built in, a carbon fibre front mudguard and Transformer-esque LED headlights. It has a range of accessories, 35 to be exact, including body coloured and tinted fly screen and scrolling LED indicators.

The detailing is understated with colour-coded elements that make the bike feel streamlined and cleaner. It is also narrower than the previous editions, 10kg lighter at 198kg and has wider handlebars. I marvelled at the mirrors, which sit at the end of the handlebars making seeing where you have been much easier, without having to tuck in your elbows. 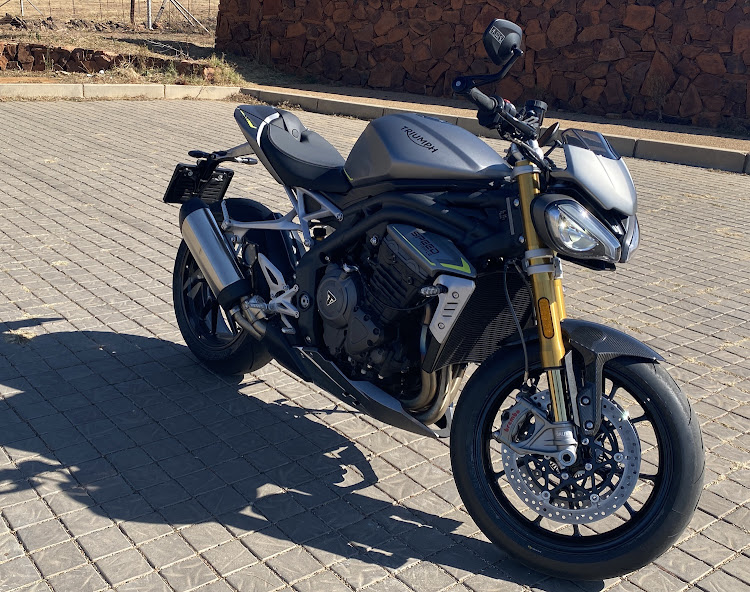 It has five riding modes, namely Rain, Road, Sport, Track and Rider, where throttle response, traction control and ABS settings are adjusted accordingly. There’s nothing scarier than, as a novice, riding in the rain and the bike keeps trying to take off on you. There’s also a keyless system, which includes the fuel filler cap, and a 5-inch TFT screen, which has a “GoPro” control system, Google “turn-by-turn” navigation, music and phone operation, and the like. Downloading the My Triumph app was relatively easy but I couldn’t get the navigation to work. After 10 minutes, I gave up. This shouldn’t be something you set-up when about to go on a ride. There’s a specific sequence that one needs to follow.

The Speed Triple is a beast but also forgiving when it comes to the ride. The throttle is unbelievably responsive, giving you torque and power when you need it but not so much that it scares you off the bike. Agile while navigating traffic and planted on the open road, including on the curves, the Speed Triple was a pleasure to ride. I had it on Sport mode most of the time, which was surprisingly comfortable on the 80km ride from Joburg to the Vaal and back. While the Shift Assist up and down quickshifter is wonderfully smooth, the gear lever is a bit stiff and awkward. I changed gears better using the shift assist than I did manually. Other than that, at no stage, did I feel apprehensive riding, though the road was a tad windy. The Speed Triple is a lovely balance between aggression and ease, with something for everyone.

This is everyday fashion that is well-made and connects to a motorcycle enthusiast aesthetic.
Cars, boats & planes
10 months ago

The yachting industry is returning to normal and that means some great new designs inspired by the automotive world
Cars, boats & planes
10 months ago
Next Article
© Wanted 2022 - If you would like to reproduce this article please email us.