Considering the sheer amount of creature comforts, safety technologies, options for sound and ambiance, and the quality of materials and fabrication, the new S-Class is a head above the rest 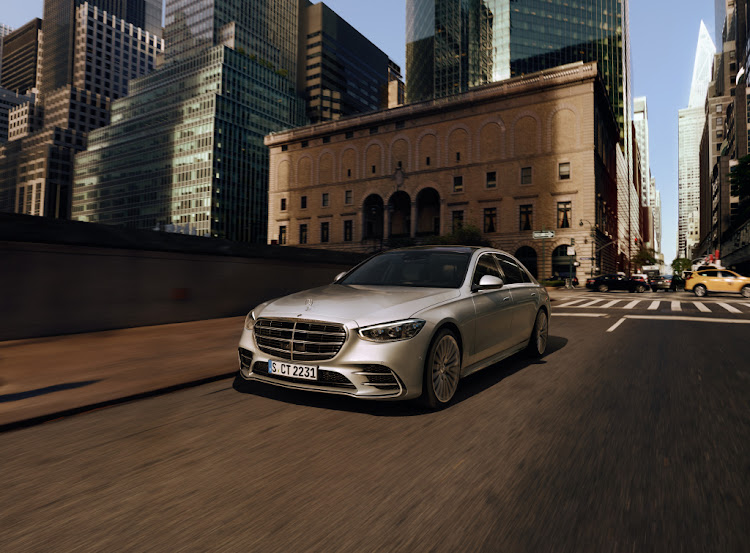 No single vehicle defines Mercedes-Benz more than the iconic S-Class. Officially introduced in 1972, the line of stately sedans actually stretches back to 1949, when Mercedes’ then-Chairman Wilhelm Haspel denoted a new family of cars called “S,” for “Super” or 'Special.' By 1956, Mercedes had launched the 220S; the designation has been used ever since to denote the most luxurious cars of the brand.

The latest instalment, the 2021 Mercedes-Benz S-Class, will arrive at dealerships in South Africa in the next couple of months.

Better-looking, more efficient, and more opulent than its predecessors, the new S-Class affords Mercedes faithful all the trappings of wealth in a reserved, stately package. The Sign of Success All told, more than 4 million S-Class sedans have been sold worldwide, making it the best-selling high-luxury sedan ever.

In China, Mercedes’ biggest market, the average age of an S-Class owner is 40—and for 10% of them, it’s the first car they’ve ever owned, according to Mercedes.  Here’s the point: Despite its being a 17-foot, 4,775-pound sedan that can look rather formless from some angles in photos (it looks great in real life—more on that later), this is absolutely not a car for fuddy-duddies. It’s a car for successful adults; it makes you feel special in the same way that Bentleys and Rolls-Royces do, but for far less money.

One Saturday morning I set out for Big Bear Lake, Calif., the alpine town 100 miles and 7,000 feet in elevation change from Hollywood. I wanted to see just how comfortable this executive crawler would be for a true day spent on the road, not just running around town. Three words: I loved it. I loved the pull of the 4-liter V8 engine as it surged down the 210; I loved not hearing or even feeling the nine gears pull me up wild turns that make Highway 18 one of the most scenic byways in the state; I loved the all-new augmented reality heads-up display that gave video, navigation, and other road info by projecting images directly into my field of vision on the windshield. I know it sounds distracting, but it was so dialed in that I felt like the aids were inside my own eyeballs, not generated in a separate machine.

The 496-horsepower S 580 has a very insulated drive feel—all smoothed off and polished to avoid anything that would disturb its silken ride. Don’t confuse this striding elegance with the nippy, gutsy tightness that a sports car should feel like, because this isn’t that. The S-Class is really long, and I could feel the real weight of the car as I ducked it into corners along the steepest bits of the road up to the lake. 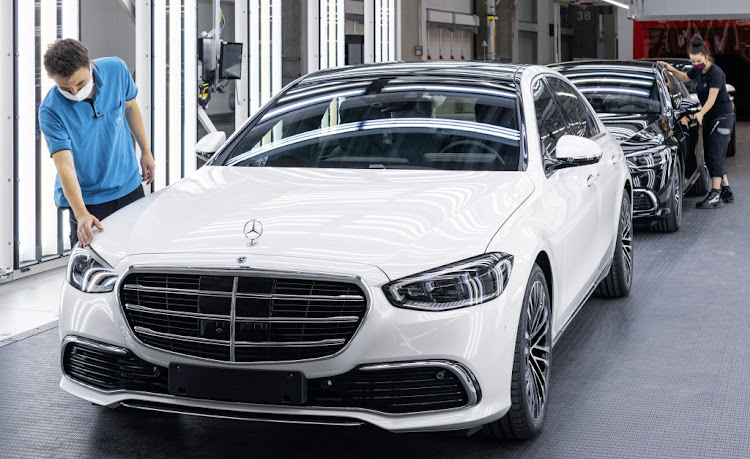 The new generation of the Mercedes Benz S-Class sedan and long version rolls off the production line in the Factory 56 at the Sindelfingen plant.
Image: Diamler

That said, 0-60mph in 4.4 seconds with a top speed of 130mph and 21 extra horsepower when the“EQ” power boost kicks in will bury most anyone who comes at you with something she thinks is faster. Don’t be fooled: Spoilers and loud pipes don’t mean fast, people! This powerhouse certainly doesn’t need ’em to be quick. The Mobile Mercedes SpaMercedes has reduced the cabin noise of the S-Class to blissful levels; using an app on my phone, I clocked it (unofficially and unscientifically) to decibel levels just over 60. By comparison, the same app reports decibel levels of over 90 in some of the classic cars I drive.

Speaking of bliss: I was extremely bummed that I didn’t play with the “Energizing Comfort” health and wellness systems until the drive home. It felt like I had missed a spa appointment. But I did use it for the entire trip back: first, Vitality mode to help boost attentiveness and energy, then Freshness to keep me going, and Warmth to soothe. The modes play music, adjust temperature and light, and even alter cabin fragrance according to their goal. Sixty-four different ambient colors go with the programs, encircling the cabin and door sills in soft light.  I ran the massaging seats continually the rest of the weekend; their pulsating nodes pummeled my hips and shoulders into oblivion. (You can choose from 10 different programs with two levels of intensity that last anywhere from eight to 18 minutes.) I wish I could have taken the suede-covered pillows on the back of the front headrests with me at the end of the day; they made my head feel weightless as I drove and certainly eased upper back and neck strain.

Also, is it just me, or do the new Mercedes cars smell amazing inside? Mercedes introduced its glove-box fragrance diffusers years ago, but it has made what feels (smells) like a quantum leap ahead lately with the ability to scent a car so subtly it’s like simply walking into another room and just feeling better. Bamboo Mood and Cotton Mood are the new fragrances this year with the S-Class; they include notes of fresh water and amber, and musk and jasmine, respectively, according to Mercedes. Considering the sheer amount of creature comforts, safety technologies, options for sound and ambiance, and the quality of materials and fabrication, the Mercedes-Benz S-Class beats the Audi A8, BMW 7-Series, and Porsche Panamera hands down.

As personalisation becomes a driving force for consumers, carmakers have proven they will give us anything these days – no matter how outlandish
Cars, boats & planes
11 months ago

If you haven’t yet seen the 2021 S-Class in the wild, I humbly ask you withhold your judgment on its appearance until you do. The car looks far better in person, outside and in motion, than it did even at a sneak-peek I had in an empty studio in L.A. months ago.

Mercedes’ top designer Gorden Wagener and his team have put an entirely new spin on this well-known and long-running model, which is often far more difficult than designing a new car completely from scratch, many designers tell me. The challenge is to stay true to the heritage, remove the bits that don’t work anymore, and add something distinctively new, all without over- or underdoing it.

This year’s S-Class has a new, stretched hood, a C-Pillar flow that leads into the sculpted shoulder, a redesigned rear window, and new seamless door handles. The car is slightly longer and wider than its predecessor, which helps free up more room in the cabin and elongates the overall shape—but the turning radius is surprisingly very compact, thanks to the all-new rear-axle steering system that helps shift the car around a U shape with the agility of something far shorter.

My only gripe with the exterior might lie with the blacked-out square panel that sits in the middle of the widely spaced and chrome-ringed grille. It’s there to cover radars and cameras, I know, but would that Mercedes could concoct an even more hidden way to house all that equipment.

Still, kudos to Wagener and his team: They’ve managed to give us a lovable new take on an old favorite. The S-Class looks sleek and professional and, based on my own experience, will get approving glances and comments from everyone from businessmen lunching in Beverly Hills to a kid at a lone desert gas station blasting Pantera.

Priced from $109,800, this year’s S-Class sets a new bar in the segment for what it means to own a luxury sedan. Haspel, no doubt, would be proud.

Luxury and tech merge in the most advanced Mercedes yet, the iconic S-Class

Swift and sensible, the new Mercedes-AMG A35 is hard not to like

The A35 sedan offers a compelling performance, at a more accessible price
Cars, boats & planes
1 year ago
Next Article
© Wanted 2022 - If you would like to reproduce this article please email us.