BMW has turned its X3 into the near perfect all-rounder, writes Mark Smyth 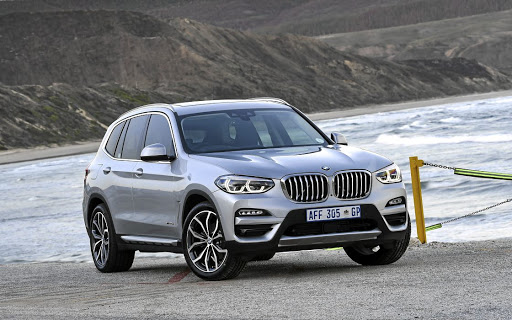 The X3 is now more grown up and even more of an all-rounder
Image: Supplied

The boot has shrunk by 1mm but the boot space remains the same at 550l, expandable to 1,600l. This figure is reduced if you take the no-cost option of a full size spare wheel. The X3 has also had its height reduced by 2mm yet up front the driver and passenger have an additional 12mm of space between the seat and the roof with the seats sitting lower.

That accolade goes not to the xDrive30i petrol or even the xDrive30d diesel, but to the current entry level, the xDrive20d (a two-wheel drive sDrive20i arrives in the third quarter of 2018). At R687,200 it provides plenty of car combined with plenty of room to add in all the nice extras you have to have.

It is also the best all-rounder, at least that is what we found on a mixture of tarmac and gravel roads outside of George and Knsyna. The M40i is great when you have no traffic, a twisty open road and the ability to put your foot down.

But BMW is touting the X3 as a vehicle for everyone and for everywhere. Even the international press pictures showed the M40i charging along gravel roads. We don’t recommend it though. 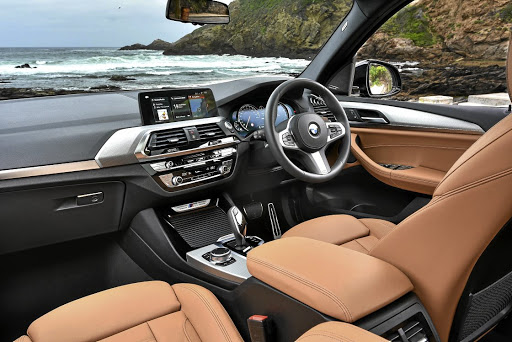 Tick a number of options or go for a package and the interior can be luxurious and connected
Image: Supplied

Downsizing in the auto industry is a real thing. But so is upsizing. We have written numerous stories about how the market is changing, how people are looking for the equipment levels and technology of an executive sedan in a small hatchback.

Models like the 2018 Volkswagen Polo are a prime example, with all the infotainment, connectivity and safety tech that used to be in upper Audi models, set to become available in the popular small hatch. It means that you no longer have to buy big to get a big list of equipment, although of course much of it still features in the options list.

Downsizing is even bigger in the SUV market. Where once it was a case of bigger is better today you can get crossovers and small SUVs that have the equipment and status of their bigger brothers. There is true status in a Range Rover, but the Evoque is a status symbol in its own right.

BMW knows all this, but it also knows that the traditional sedan market is declining. So not only is production of the 3 Series coming to an end at its plant in Rosslyn near Pretoria, to be replaced by the new X3, but the new X3 has been upsized, perfect for those who are downsizing. That is not to say that BMW is leaving the big SUV market, the X5 continues and the brand is going even bigger in 2018 with the X7, but the X3 now crosses more market segments than ever before as we found out at its launch.

The new X3 has more presence, making it closer to the X5 than before. That is mainly about design but it is also about size. The X3 has grown 51mm in length, with an additional 54mm in its wheelbase. Its track has grown 4mm front and rear while its width between mirror tips has increased by 49mm. 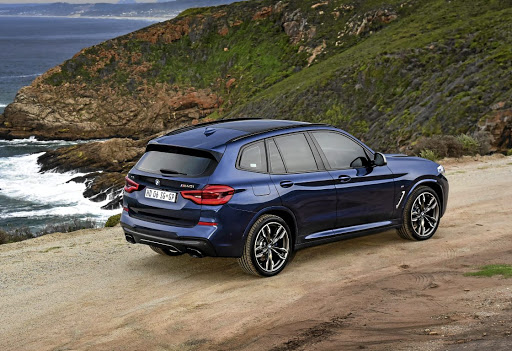 The M40i is a great tarmac machine but it is not the gravel road explorer BMW wants you to think it is
Image: Supplied

The ride is firm courtesy of 20-inch low-profile runflat rubber. It has grip but the low profile means you can expect a fair amount of understeer as the tyres slide across a gravel surface. The M40i is a tarmac machine and a good one at that.

The xDrive20d lacks the power of its M-Performance sibling, but it makes up for it with its all-round character. The 140kW and 400Nm will cruise to 100km/h in eight seconds. BMW is also claiming an average consumption figure of 5.4l/100km.

The torque delivery is smooth, allowing you to cruise better on the tarmac but even more so on the gravel, but here too things are not perfect. The tyre profile is better at 225/60 on 18-inch rims, but they are still runflats and that makes exploring a little tricky. BMW says it will not offer normal tyres.

Tyre issues aside, there is loads more that is new in the X3. Things are quieter courtesy of more sound insulation including a windscreen made from acoustic glass. The interior is more upmarket and more connected with a 10.2-inch touchscreen infotainment system, a new multifunction steering wheel (it’s thinner than the old one which we don’t like so much) and more executive-looking materials and design.

The interior is where you will need to tick the most options though, particularly if you want the better 12.3-inch touchscreen, the ambient lighting and the digital instrument panel. Fortunately there are package options including xLine, Luxury Line and M Sport which will give you some of these things.

When we look back at the original X3 it was almost as though BMW made it because it felt it had to. The new one feels as though BMW has made it because it wants to. The designers and engineers have put so much effort into it that suddenly downsizing from a X5 seems not only plausible but the right thing to do. And while the first models are imported, from April 2018 you will be able to buy one that is built in SA. Now that’s something to be able to laud over the braggers in their X5s.

Alfa Romeo: The alpha leading the 'design' pack with their latest SUV

Alfa Romeo has launched its foray into the premium SUV fold, the Stelvio
Cars, boats & planes
4 years ago

We took the updated Toyota Land Cruiser Prado up Sani Pass to see how it fares
Cars, boats & planes
4 years ago

BMW has revealed the production version of its X2, which is due in SA in March 2018, writes Mark Smyth
Cars, boats & planes
4 years ago