Our capacity for consuming images seems limitless so what is the point of exhibiting them? We’re constantly told we live in an image-saturated age but the truth is we’re nowhere near saturation point. Our capacity for consuming images seems limitless and more and more of them are produced - and discarded - every day. So, while photography is ubiquitous, the value of each individual photographic image has changed. If you’re a serious photographer wanting to put on an exhibition, how do you respond to this culture of the image? What is the point of displaying a perfectly printed, carefully composed, high-quality, framed image on a gallery wall?

It was one of the first questions Oliver Chanarin, one half of Broomberg and Chanarin – the duo whose exhibition Bandage the Knife Not the Wound is on at the Goodman Gallery in Joburg until 26 May – raised while taking me around the exhibition the morning after the opening night, before jetting back home to the UK. “You can go and grab a low-res David Goldblatt off the internet and put it on your desktop,” he says. “What is the relationship between that low-res file and an original print that sits in a museum? How do they connect with each other? It feels like images are increasingly removed from this idea of the original.”

'Say diversity' — the best photographs from around the world

In fact, he goes so far as to say the real value of an image in this new digital economy is not even in its status as image. He says photographs have more value as “data clusters”. “The more they are reproduced, and the more they are shared and the more that they are liked, the more they accrue a different kind of value,” he says. “The image is just the surface, but behind the image is the metadata, and it’s the metadata that is actually being exploited and mined by companies like Google when they’re tracking the movement of images as they circulate in this very new ecosystem that we don’t really understand yet.”

This exhibition of photomontages printed on cardboard is a kind of engagement with that issue, rather than an answer or even an attempt to make a definitive statement. It’s also a continuation of their preoccupations over the 20 years they’ve been working together.

Adam Broomberg and Chanarin (who both have South African roots, although neither has lived here for decades) are kind of pop-punk philosopher princes of photography. They seem to have spent most of their careers interrogating photography through the medium of photography itself, rather than just taking pictures. From their early days in the 90s at Benetton’s Colors magazine, where they eventually took over as editors, to their current set-up as photography professors at Hamburg’s Hochschule für bildende Künste, they’ve been as interested in “the life of images” as much as the pictures themselves: “The sense of their currency and how they’re exchanged and the ecosystem of photographic images,” as Chanarin puts it.

It doesn’t matter if it’s a high-res image or a low-res screen grab, they kind of just meet each other on this poor surface and coalesce.

Broomberg and Chanarin once exposed a piece of film to light in response to the death of an Afghani solder while they were photographers on the frontline, rather than take a conventional conflict photo. For another project – a commission to document Bwiti initiation rituals in Gabon – they decided to shoot using expired Kodak film stock (considered racist even in the 70s because of its inability to render dark complexions) to comment on the commission itself. Just a single shot came out. Another recent project involved taking portraits using a Russian 3D imaging technique designed for facial recognition and surveillance. They frequently combine media, creating handmade photo books, bringing together original and found images. They were awarded the prestigious Deutsche Börse Photography Prize for one in 2013.

So, in many ways, they’ve always toyed with the question of how photographs are shown and have a long preoccupation with the political and social uses to which photography is put. The idea of the “poor image” the “re-circulating and increasingly degrading” image that loses its quality as it circulates online, is shared, downloaded, reposted, and the uses it’s put to in this new ecosystem was at the root of this project. “All of this digital labour – you’re doing it for free – and somebody’s benefiting, but the question is who?” The image itself is the disposable aspect of the data clusters that photographs have become.

“For us, photography has moved away from this precious idea of an original because of the internet and because of the digital image. What we see is images circulating now that are very disposable,” says Chanarin. “It doesn’t make sense for me to print this and put it in a frame. It makes sense for me to look at it on my phone.”

If images themselves are just the packaging – the detritus or a disposable byproduct of this new digital economy – there’s another, quite different, example of something similar that Broomberg and Chanarin found exemplified this quality in a tangible, material way: cardboard boxes. “There’s something wonderful about this material,” says Chanarin. “It’s sort of ubiquitous. Every time you buy something online, it comes in a cardboard box. Boxes are kind of everywhere.”

The materials for their photo lab in Hamburg come in just such boxes and the first time one of them experimented with printing an image on one of these boxes while playing around with a UV printer they had access to, a penny dropped. 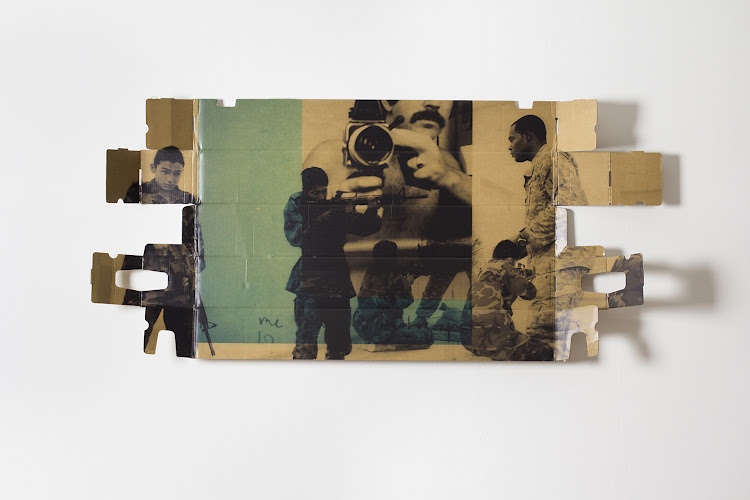 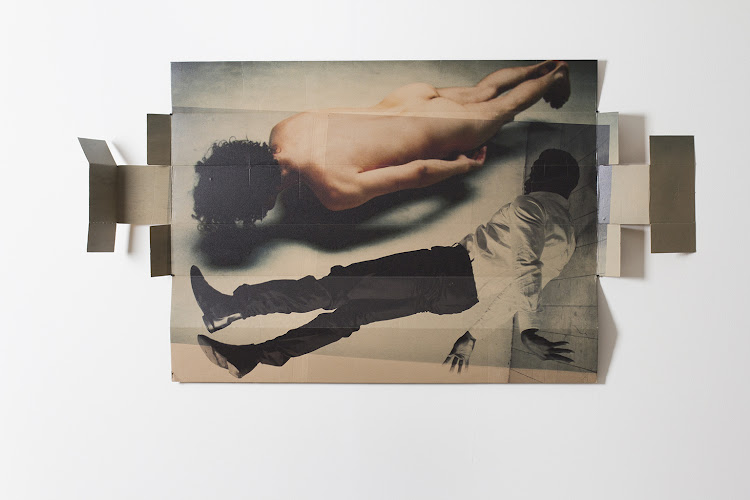 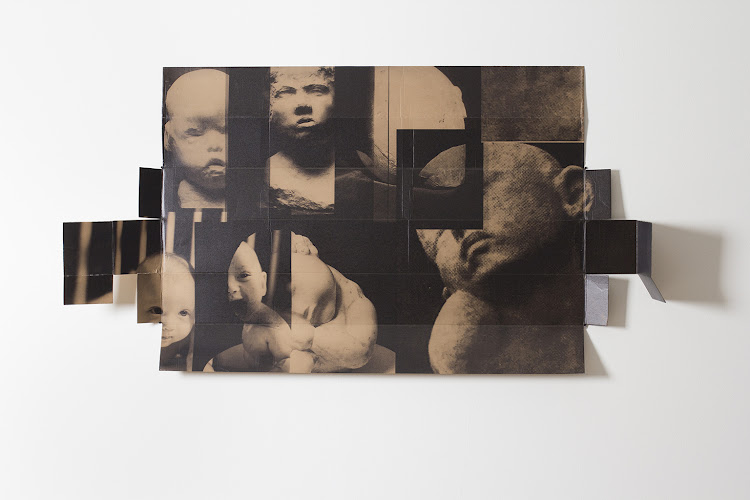 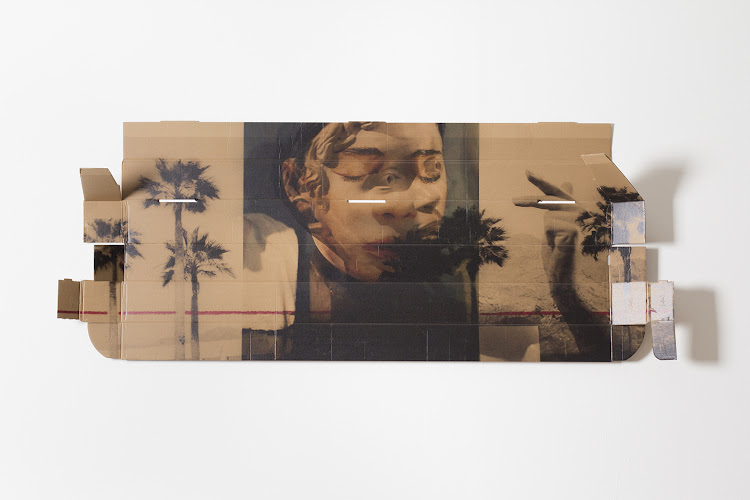 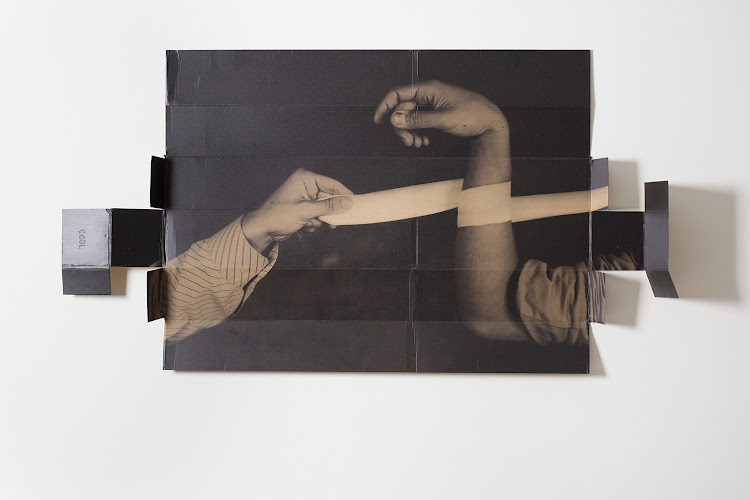 Chanarin says he and Broomberg found printing on cardboard liberating. As the poor material and the poor image combine, something magical happens. “It doesn’t matter if it’s a high-res image or a low-res screen grab,” says Chanarin. “They kind of just meet each other on this poor surface and coalesce.” It freed up the anxiety of “proper” printing and photography to precipitate the works that finally came to make up this exhibition.

As the two of them visited Hamburg on alternate weeks, they’d play a game where each would print a new image on the piece of cardboard the other had left behind. The images have been mined from their personal hard drives – boxes and boxes of them – disgorging a somewhat random selection of images, an odd combination of forgotten research; personal images of wives, parents, children; the snaps that didn’t make it into exhibitions; scans from books. The exchange that resulted was a free-flowing, playful, argumentative ping-pong of print overlays, framed (or with their frames disrupted) by the odd shape of the boxes.

The clever aspect of it is the material the image is printed on doesn’t just act as a medium to display the image. It doesn’t even do the alternative work of framing or complicating the way we look at the image, but actually represents the image. There are images of various qualities – high res, scans, low res, which are equalised on the sepia-toned backing of the cardboard box, which in turn becomes another representation. 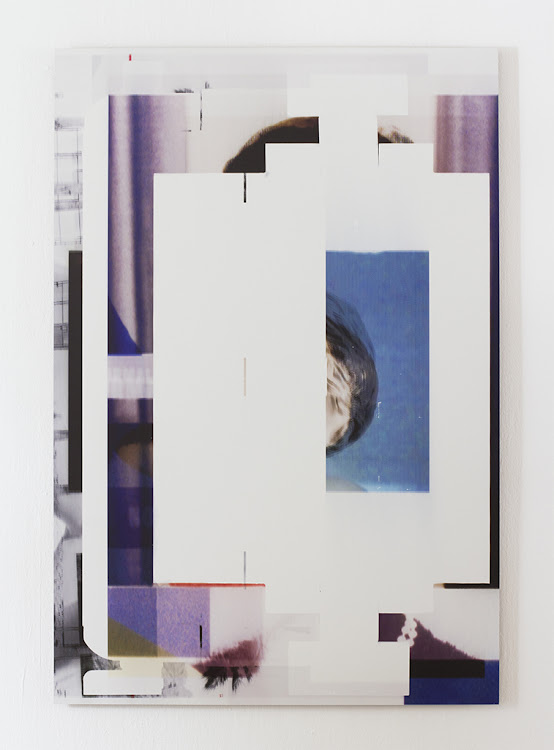 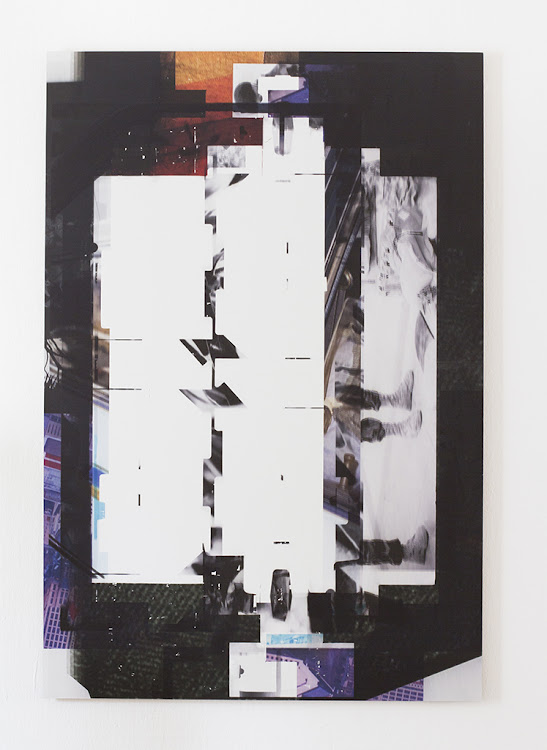 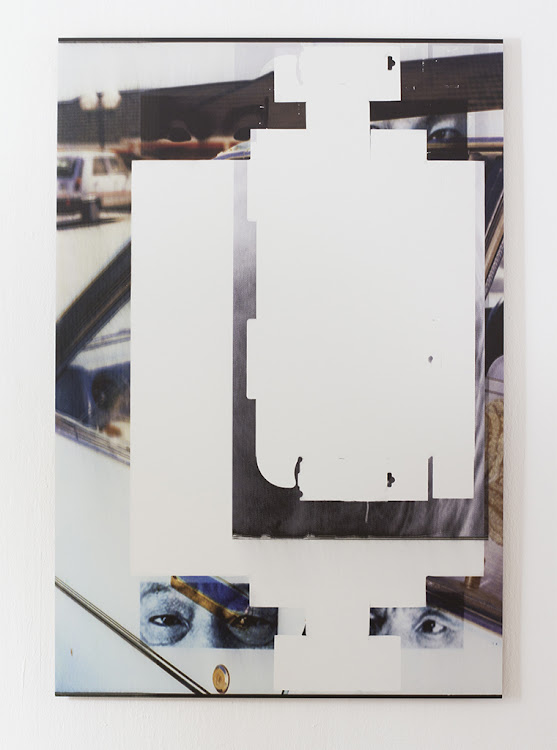 They’ve also exhibited the panels, or beds, on which the cardboard boxes were laid as they were sent through the printer – the edges their own overlaid compositions of the parts of the images that went over the edges – that didn’t make it onto the box or “frame”. They’ve been hung like mid-century abstract artworks.

Their presence adds another layer to the question: “What is work and what is detritus?” Chanarin seems to suggest it’s the opposite of what we might think. “A lot of our photography is more concerned with what is happening outside the frame – ie, the context of the phonograph – more than what’s in the photo,” he says.

As the works in the exhibition gesture outwards, each referring to another degree of what’s outside the frame, the whole exhibition becomes complicated all over again by the fact that these supposedly throwaway works – poor images printed on poor material – are being exhibited in a posh gallery. The value of the images has changed again in their new context: the economy of the art world, which opens up a whole new can of worms…

- 'Bandage the Knife Not the Wound' is on at the Goodman Gallery in Joburg until 26 May.