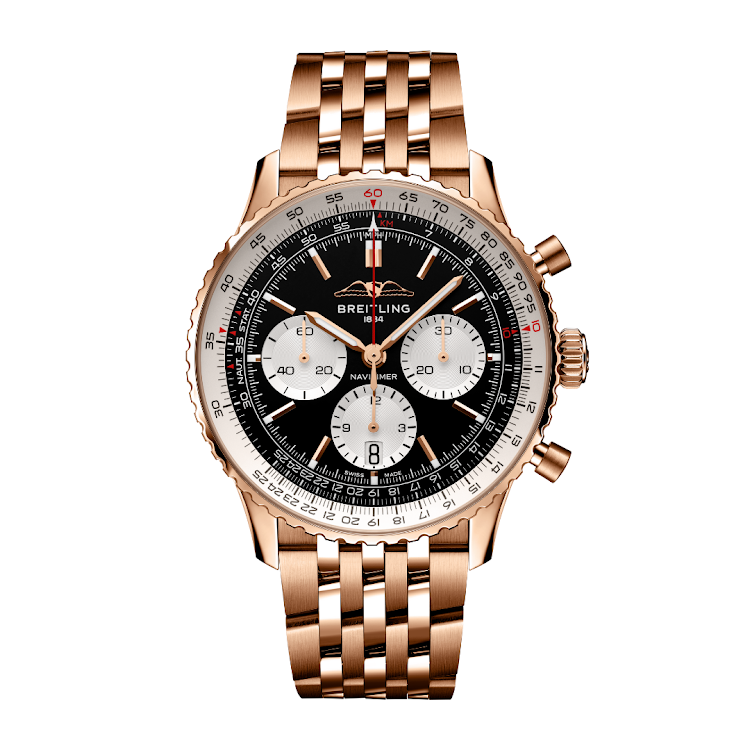 A portmanteau of “navigation” and “timer”, the ultimate co-pilot debuted in 1952 as a prototype equipped with the now-familiar circular slide rule to enable all aviation-related calculations. Breitling’s Navitimer is the oldest mechanical chronograph still in production and celebrates its 70th anniversary this year.

While his story at Breitling has essentially only just begun, 34-year-old creative director Sylvain Berneron has already made his mark, starting with the revival of the Chronomat three years ago.

“That was my first project, which I had to digest and modernise. The Chronomat was an 80s best seller, the watch that saved the brand. But it had become a bit dusty. We kept a few chapters in the ‘Book of Chronomat’ and extracted some details to bring it into the 21st century,” Berneron says.

Then came the SuperOcean 57, followed by the Super Chronomat and this year we see the Navitimer through his lens.

“Navitimer is the most iconic Breitling. It’s the best of both worlds. We have captured the iconic aesthetics of the 806, the original logo, flat dial-like original, but with modern attributes. It's an ‘evolution not revolution’.”

SPONSORED | Tune in daily for online updates about the news and trends coming out of this international event dubbed 'the fashion week of the ...
Watches & Jewellery
3 months ago

An “absolute refusal to fit in” is the way the trained transportation-automotive designer describes his approach to design. And while this might sound “rebellious or obvious”, Berneron is well placed with the right attitude and age to understand the dreams and desires of a new generation of collectors.

“It’s important to be able to put yourself in the shoes of your potential customer, who is about to hand over a substantial amount of money for something they don’t really ‘need’. They trust us so we need to ensure the unique character, emotion and value in our pieces.” 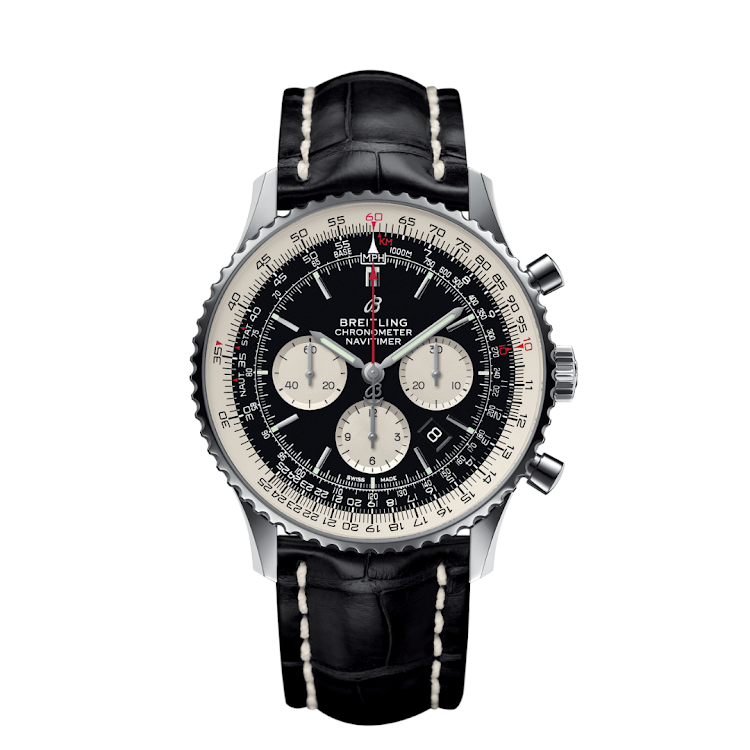 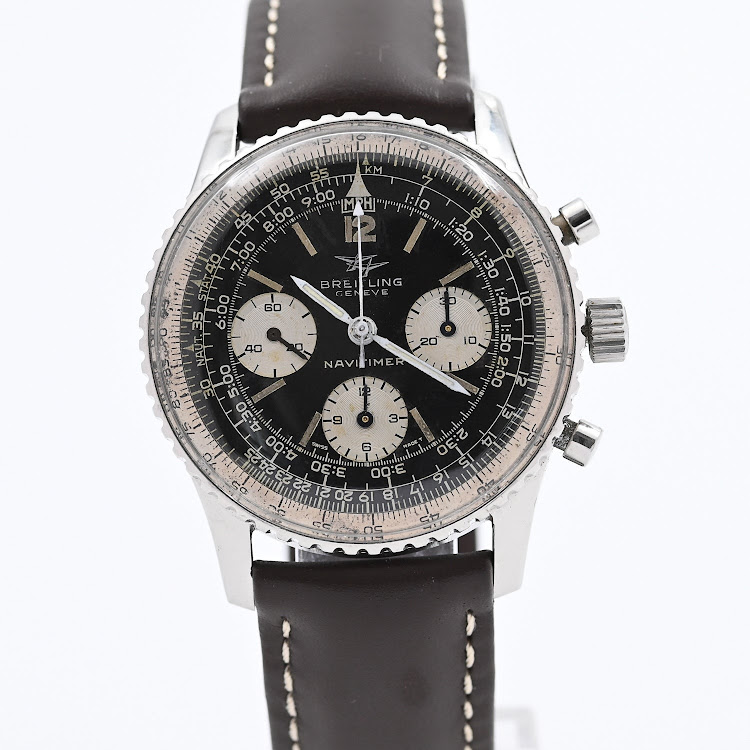 The 138-year-old company has gravitas and commands respect but as Berneron points out, watch collecting is a hobby and therefore we should also not take it all too seriously.

“Breiltling is not as ‘snobby’ as some luxury brands can be. You shouldn’t have to beg for a watch. We offer a more modern, audacious form of luxury through design and colour choices, with a casual approach but one that is strongly rooted in history.” 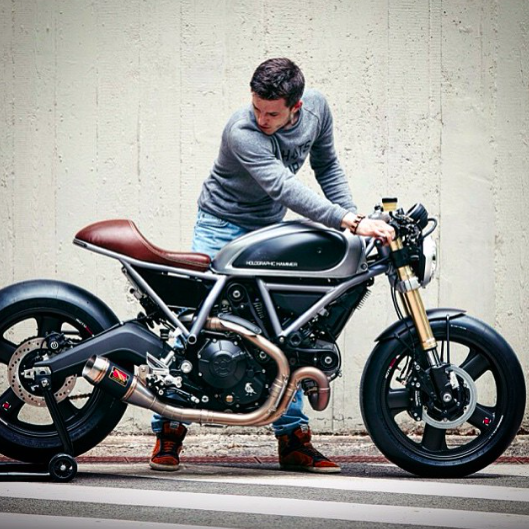 Berneron is Gen Y, bringing freshness and relevance to the design process; but working for one of the established “pillar brands” requires a grasp of the rich history to have a better understanding of where a brand is right now and where one can take it. In this regard, Berneron acknowledges the support of Fred Mandelbaum, a renowned vintage watch collector-turned Breitling consultant.

“The deeper the research, the more coherent is the answer,” Berneron says in reference to sound guidance he once received from a former teacher and which he applies to his daily practice. This approach was particularly relevant for interpreting an icon like the Navitimer. “I tell this to my team every day ... before they put pen to paper, you have to understand what you are about to design and what the product stands for.”

There is also the emotional and material connection: “You have to live with it. I wore an original [Navitimer 806] for a few months to feel how it was on my wrist, how it looked in different light.”

The new pieces at first glance might not seem radically different from the original but on closer inspection, worn on the wrist, you can appreciate Berneron’s method. To honour the legendary design, he and his team have produced an exceptional edition, which is both classic and modern. 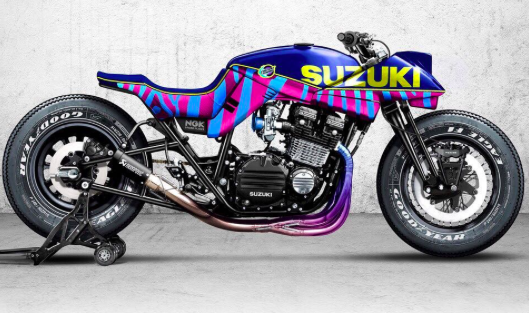 Also known by the alias Holographic Hammer (@Holographic_Hammer, a reference to the toolbox icon of his computer design program), Berneron is responsible for shaking up the motorcycle customising world with brother Florent — a former French military aeronautical mechanic — from their studio/workshop in a forest just outside Paris. Berneron grew up on motorcycles, participating in racing meets from the age of seven, so he has an intimate knowledge of bikes which informs his “inventive yet function-led and buildable” approach to design.

He is best known for concept commissions such as the Ducati Scrambler Project Hero 01, BMW S1000RR, and a custom-built Honda RC51 with wire-mesh bodywork. He also created the BMW Concept Ninety while on the design team at BMW Motorrad. This led to the production of the top-selling customisable, retro-styled BMW R-NineT roadster. 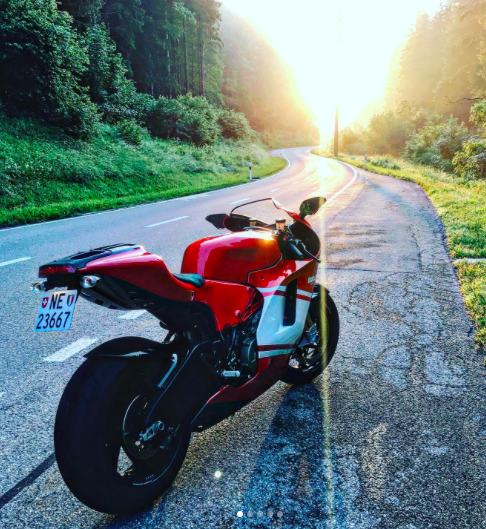 Crossing over from motorcycles to watch design required a big shift in scale perception, especially with Breitling working to tolerances of one-10th of a millimetre. Yet, for Berneron in essence these two machines are so similar: “Both are highly technical, aesthetic objects. A bike has an engine and chassis, and a watch has a movement and a case. There’s bodywork and there’s a dial and hands.”

This attention to minute detail may escape a first glance of the Navitimer’s subtle evolution, but let’s not forget how revolutionary this watch was for its time.

“A big impact on the design is the slide rule, which has been flattened and together with a new domed crystal create the illusion of a more compact profile,” Berneron points out. Other repeated design codes include the baton indices, the trio of chronograph counters and the notched bezel. Contemporary shades of blue, green and copper update the dials, which also feature an added dash of nostalgia with the AOPA-winged logo returning to its original position at noon. A date window is discretely positioned in the subdial at 6 o’clock.

Weather permitting, a very rare Ducati Desmosedici is Berneron's daily ride. “The company made only 1,500 from 2007 to 2009, and of these, the US received 300,” says he says of his pride and joy, which took him six years to find. 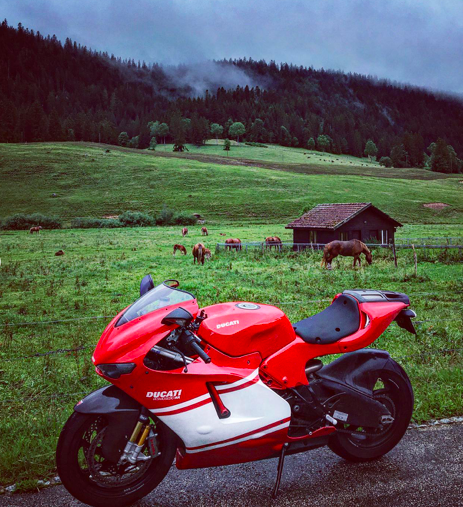 “This is the bike equivalent of the Ferrari Enzo. When they won the MotoGP, in true Italian style the Ducati bosses decided to produce the bike for their customers. I wish I was part of that conversation. They must have been drunk. It wasn’t cheap [new, the Desmosedici cost $72,500]. This is the closest you will ever get to a GP bike for the road.”

To really appreciate a bike like this requires open road, lots of it, so given his busy schedule he is at the very least committed to grabbing his backpack and making the 2,000km pilgrimage each year from Neuchatel to Biarritz to attend the Wheels & Waves Festival.

But it’s not all about the bike. Berneron has always had an appreciation for watches, in particular those “with interesting shapes from the London era and watches from the 1960s”. Examples are the asymmetrical Patek Philippe watches by jeweller Gilbert Albert, who was part of the designer team at Patek and head of the workshop from 1955 to 1962. “His avant-garde shapes for watches and jewellery were influenced by modern art.”

In Berneron’s personal collection is a Patek 5196 Calatrava — an engagement gift from his wife Marie-Alix — a SuperOcean 57 on mesh bracelet, and a JLC Reverso. “I never see the Reverso though because Marie-Alix ‘stole it’ from me”. He is also an enthusiastic participant on the Hodinkee collectors forum, with well-informed and “diplomatic” contributions to often fickle points of view.

It’s the 50th anniversary of The Limits to Growth (1972), The Club of Rome’s first major report on the impact on the environment of humanity’s behaviour and abuse of resources. From a Millennial designer's perspective, I’m keen to hear Berneron's view on the future of luxury and “responsible” consumption. Can these go hand-in-hand and still keep shareholders happy?

“Now we are talking. First of all, Jay Forrester and Dennis Meadows [the authors of the report] were absolute geniuses. The various metrics they applied 50 years ago are [playing out] almost exactly as they predicted.” Watches are non-essential luxury items; however, as Berneron says, “the industry creates a lot of financial value in small objects, therefore it has a small environmental impact, while keeping hundreds of thousands of people employed in very good working conditions. So watchmaking meets most of my personal values for tomorrow’s society.

“Long term, if humans are reasonable enough to slow down a little, we’ll still be able to  produce and enjoy luxury items. If not, inequalities will keep getting bigger and bigger, we’ll sell only $10K+ pieces to the happy few while the rest of us will be busy getting our main needs fulfilled (food, rent, gas, electricity, health).

“Nothing is ever perfect of course, but overall I think the luxury industry is sustainable in the sense that it redistributes wealth easily, generates taxes and jobs, while not damaging the planet too much. I left the car industry because of its global impact. Getting people to buy a new car every three to four  years — using designers as weapons to create ever-changing styling cues — is just ridiculous and can’t be sustained in the long run.”

Patek Philippe’ returns to roots of the Calatrava design vocabulary

While the manufacture has given the iconic design a makeover, it also pays tribute to two popular models
Watches & Jewellery
3 months ago

About 80 original artworks have been selected for watch customisation in a competition dubbed by Swatch as ‘the world’s most inclusive art project’, ...
Watches & Jewellery
4 months ago
Next Article
© Wanted 2022 - If you would like to reproduce this article please email us.