Of course they’re more than just for telling the time, they’re also loaded with meaning and history and love and life. Gary Cotterell spoke with the purveyors of SA’s finest watches about their own timepieces and stories.

“I guess my love for watches started very young with a gift when I was 10 years old,” says Angelina Tan, who has been a familiar, friendly face in the local industry for almost 18 years. Part of GMT-Investcorp, headed by Christina Tan, Angelina started out managing the luxury-brand franchises of Gucci and Bally while also being custodian of Patek Philippe, which is now her sole focus. Her watch collection clearly reveals her love,  or as she says, “bias” for good reason, of this haute-horlogerie manufacture.

Your first watch? A Seiko dual time with quartz movement. I was only 10 when I was gifted the watch by my late father. Unfortunately, I lost it after a couple of years.

What does quality time mean to you? Being able to do the things I want to — spending time with loved ones, learning a new skill, picking up a book or series and binge reading or binge watching guilt-free.

What do these pieces say about you? The Ref 5066A is a men’s watch created over 20 years ago. It was a hand-me-down from my late father and therefore holds a special place in my heart. Despite its being a men’s watch, at 36mm it is relatively small in today’s terms. It sits really well on my wrist. I am usually in corporate wear so I like to dress it down with other accessories such as this watch with its sporty, tropical, rubber strap. It livens up the corporate looks. It is also a very understated watch and does not shout “look at me!”

The Ref 4936J has been a favourite since its launch in 2005. It is a combination of what I want in a watch — elegance and practicality. The Ref 7042/100R is just sheer elegance. 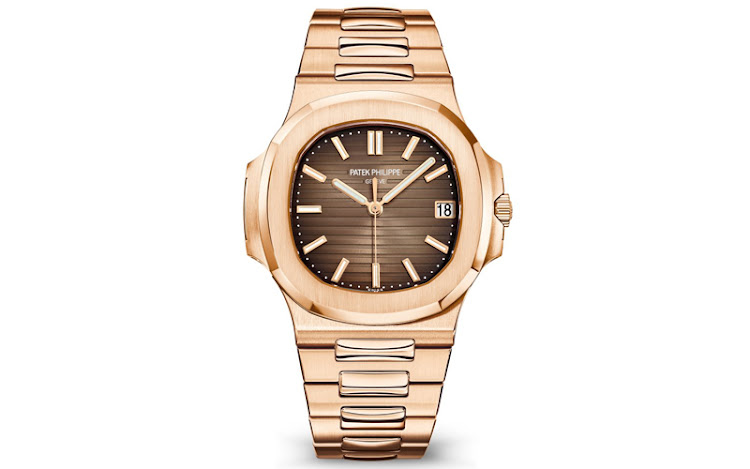 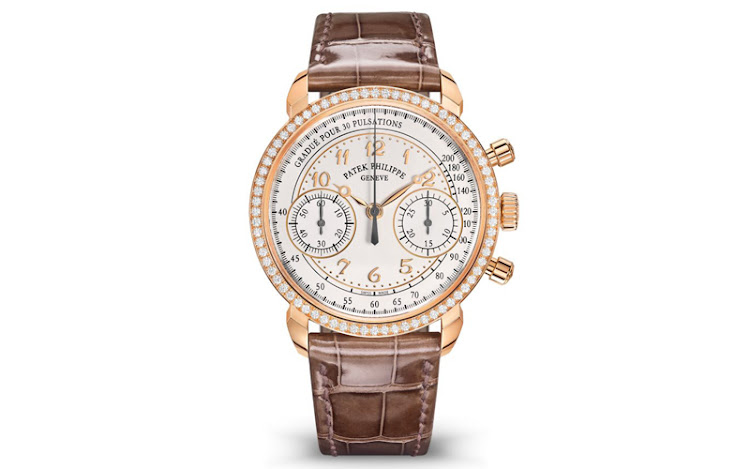 Charismatic sculptor Donald Greig, along with brothers Christopher and Richard, is part of the fourth generation at the helm of Charles Greig Jewellers. Their great-grandfather Charles was a young watchmaker from Aberdeen, Scotland, who made his fortune in early Johannesburg. He set up his first business in 1899 to take advantage of the new investment and the people (engineers, financiers, geologists) moving to Joburg for the gold rush. “He knew that they all needed pocket watches and clocks, and so the legacy started,” says Donald.

Around 1915, Charles Greig became one of the world’s first stockists of Rolex and the brothers have an impressive collection, including a Rolex that dates to that year. “We have carried the Rolex brand for over 100 years and have acquired over 45 vintage Rolex watches and pocket watches, which have our company name printed on the dial. Pre 1940, this was a fairly common practice. In those days the brand was as important as the retail outlet. These watches would have all been sold by my great grandfather in the early 20th century, and today they are still in fine working order.”

Your first timepiece? A Longines, which my father gave me on my 18th birthday. I acquired my first steel Rolex at the age of 25.

Favourite pieces in your personal watch collection? My favourite two watches are my Rolex Daytona in steel with a white dial, which I wear every day. And my Panerai Bronzo Submersible, which I wear when I am playing sport or on holiday.

The affable Mr Piguet is the epitome of the warm-hearted Joburger and the perfect representative for Breitling’s re-emergence as a much fresher brand for people with active, purposeful, outdoor lifestyles. He has a long-standing family history in watchmaking and jewellery dating back to 1897, with both his father and grandfather having trained as watchmakers in Le Brassus, Switzerland. Combine this with the fact that his surname is the same as one of the founders of another rather famous watch brand and it was inevitable that he’d eventually end up in the industry. However, it was his sister Janine who brought Breitling to South Africa in the late 1980s and only managed to get him seriously hooked over a decade later.

What does quality time mean to you? Spending time with my family, preferably in the bush.

Three favourite watches in your personal collection? Breitling Chronomat “Bluebird” limited edition of 250 pieces, released in 2000; a Breitling Navitimer B01 46mm; and a Breitling Superocean Heritage B20 46mm.

What do these pieces say about you? I enjoy an active, outdoor lifestyle, but also regularly find myself in formal situations, and these watches are ideal for me.

The one watch you’d never part with? My Navitimer. 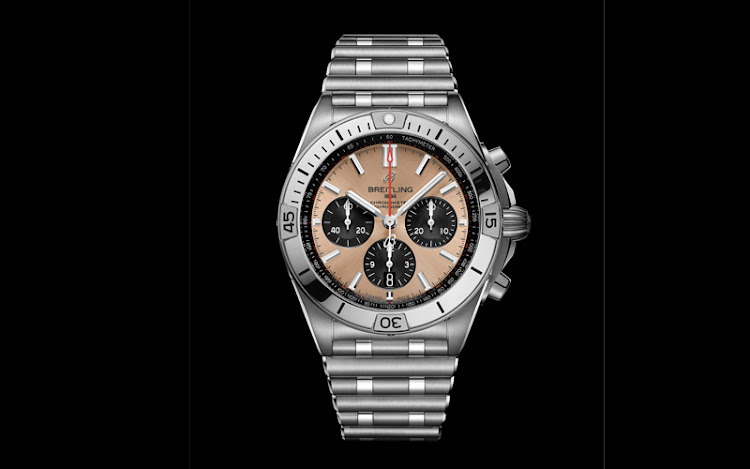 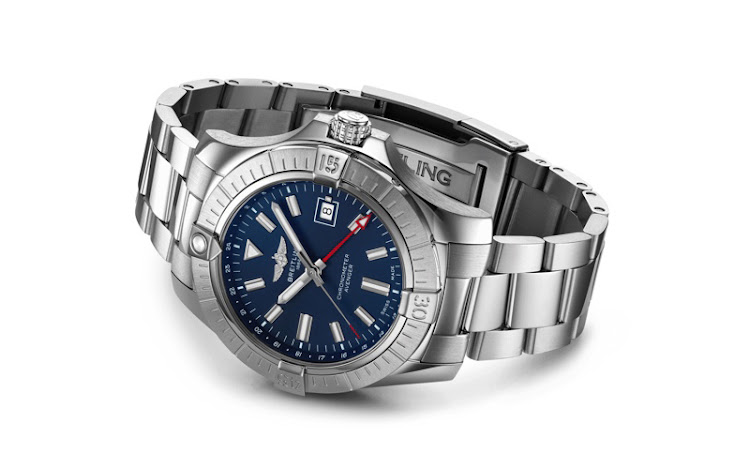 How does your brand give back? In South Africa we support Qhubeka, which has supplied more than  75,000 bicycles to underprivileged children, thereby enabling them to reach their schools far more quickly and easily, with measurable improvements in attendance and results.

Having run 11 Comrades marathons and completed eight full Ironman events, it’s fair to say that Alan Carrington is an active guy. And he has a watch collection to match. His introduction to the watch industry was through his father — a qualified, Swiss-taught watchmaker who opened a small retail business in Germiston in 1966, offering predominantly watch repairs but slowly branching out to offer watches and jewellery for sale. “Once I had finished my studies, it was almost predetermined that I would join the business, as I already had a passion for watches.” Carrington senior had been an apprentice watchmaker at Shemer Jewellers, which was acquired by the group in the late 1990s. Its newly renovated flagship store in Bedford Centre offers a shop-in-shop style experience with brands such as Rolex, Omega, Zenith, Tudor and Tag Heuer.

Your first timepiece? I can remember receiving my first watch as if it were yesterday. It was a hand-wound, mechanical Seiko with Arabic numerals, which I received for my sixth birthday in my first year of school. That was 1973, just before the quartz revolution. I still have that watch.

What does quality time mean to you? Nothing gives me greater pleasure than riding my bike on weekends with like-minded mates. My other passion is travelling. I will jump on a plane at the drop of a hat to visit a foreign country.

What do these pieces say about you? My Rolex is my everyday watch that I wear in my store, but is very versatile for travel with its GMT functionality. The Omega is a very rare edition and generates so much conversation. The Pelagos is basically my no-fuss, no-nonsense holiday watch. The Pelagos, in my opinion, is the best value-for-money watch on the mark today. 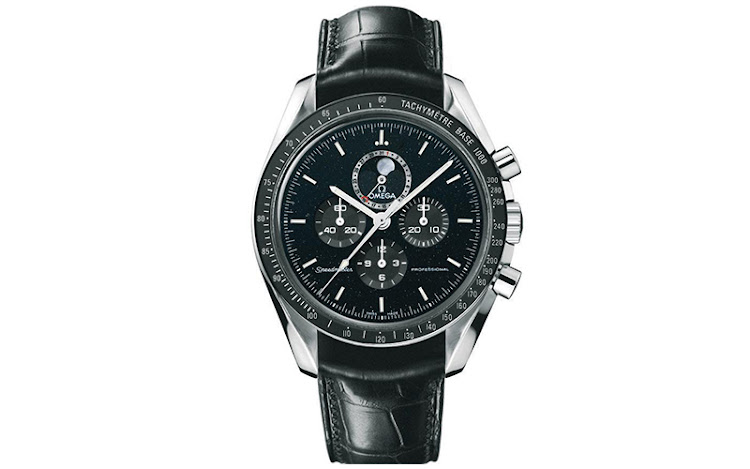 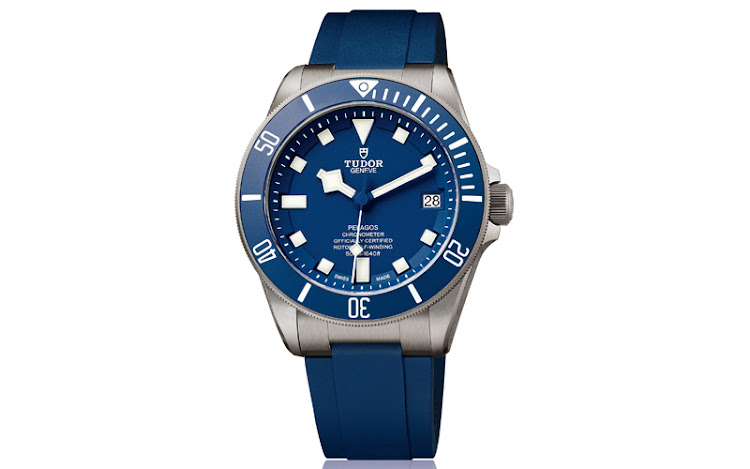 The one watch you’d never part with? There are two, both priceless from a sentimental point of view. My Seiko and a gold Eterna Matic, which my grandmother gave me for my 21st.

As the duo who lead Picot & Moss, David and his wife Jennifer Moss have built a successful business over the last 40 years. Picot & Moss was built on David’s childhood passion for watches through his family’s business, which he bought back and re-ignited in the mid-’80s. Serendipitously, he started out trading watch straps, which had been sparked by his brother-in-law Michael Shkudsky (of Architects of Time and Boutique Haute Horlogerie) who bought him a strap on a trip to Hong Kong. One thing led to another and he soon found himself in Hall 1, “watch heaven” at the Baselworld watch fair. David and Jennifer started out with Swiss brand Enicar — “as it happens Jennifer’s first watch, a gift for her 18th birthday” — and Rado but always had their sights set on the edgy, elegant Tag Heuer brand, which was also the perfect fit for the sport-obsessed couple. Gucci followed, then Calvin Klein, IWC, Jaeger-LeCoultre, Zenith, Hermès, and more recently Bulgari.

Your first timepiece? The very first watch I was given did not last long. I was nine years old and my parents were in Switzerland. I so badly wanted a watch. A package was delivered to our house postmarked Switzerland. Overwhelmed with excitement, I tore open the box. It didn’t contain one watch but six… all made of chocolate! Tasty, but it didn’t quite get me ticking.

What does quality time mean to you? The lockdown has been a gift of a lifetime. It has given me hours and hours to spend with my family: Jen, our daughter Alex, and especially our six-month-old granddaughter, Georgi.

Favourite watches in your collection? The only watches I really collect are vintage. My favourite would have to be my original blue dial Heuer Monaco as worn by Steve McQueen in the movie Le Mans. I also acquired an original blue-dial Heuer Carrera Skipper. Lastly, although not a wristwatch, I have a Westclox Baby Ben alarm clock that I still use to this day.

What would you like to add to your collection? I’ve been eyeing a Richard Mille RM67 in rose gold for Jen, the Bulgari Octo Finissimo Tourbillon Auto 3.95mm — the thinnest watch in the world — and of course the brand new Tag Heuer Connected.

Johan Dreyer describes himself as an “overqualified smous” who travels the world in search of watches that grab his attention and then shares with his customers through TopWatch, one of the leading suppliers in South Africa of pre-loved, top quality and thoroughly inspected brand-name watches. He ended up in the business of watches by pure accident, through “an inflated cycle of buying, getting bored and then I started selling. One piece became a collection, which then became a business,” he jests. While Dreyer is a motorsport fan with what he describes as “a fast-paced, balls-to-the-wall life” to match, the family man reveals an altruistic side that keeps things very balanced. Dreyer has a sporty personal style that is reflected in his choice of big, bold watches that complete his look.

First timepiece? An IWC Big Pilot Annual Calendar in white gold that I obtained from a lifelong friend, Andries Greyvensteyn.

What does quality time mean to you? Amid the lockdown, I have come to value every passing second. Wasting, passing, or burning time is the evil of our age. Letting opportunities by without a thought of engaging with family, loved ones, my kids; rushing through a message, short responses, is horrific. I believe in harnessing every moment for a deeper encounter with all relationships.

Favourite watches in your collection? I prefer newer watches, cars and bikes. I’ve a sporty style so I’m a fan of most 44mm Audemars Piguet Royal Oak Offshore pieces. When it comes to classic style, I like the IWC Big Pilot and the formal dress styles of the A Lange & Söhne Zeitwerk Minute Repeater.

One watch you’d never part with? The Tag Heuer F1 my wife bought me when I was 25, with a crowd-funded initiative as we were super broke.

Your brand’s most impactful sustainability initiative? TopWatch has a corporate-social responsibility initiative called Pym61, a youth-empowerment organisation run by my wife Debbie-Ann. It reaches over 5 000 kids every day, for the full duration of their schooling and assists with everything from feeding schemes to leadership guidance. This gives us a great sense of purpose over and above profitability.

Making the cut: 13 fabulous jewellery pieces to add to your collection

Making the cut: 13 fabulous jewellery pieces to add to ...

Piaget breaks rules (and records) with its thinnest ...