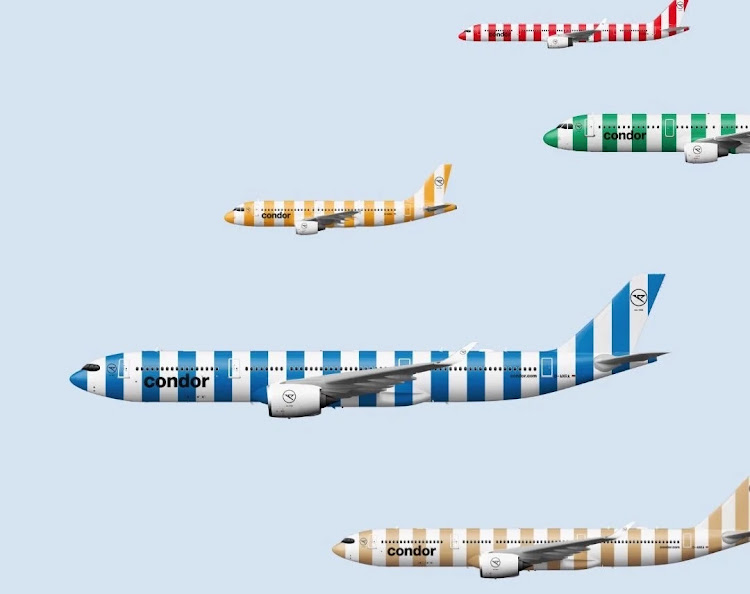 Last week, glancing over Monocle Magazine’s morning mailer, I noticed a story about German “leisure air line” Condor’s rebrand. If you’d spent time at a European airport up until that announcement, you would have clocked the budget brand’s yellow-and-grey livery, and then immediately forgotten it. As plane markings go, they were entirely unremarkable.

Now Condor has decided to give its fleet a major facelift, courtesy of gigantic, bold bands that wrap its planes from nose to tail. It’s a clever, super-sized riff on the kind of stripes you’d find on beach umbrellas, towels, and loungers next to swimming pools (think the red-and-white pattern at the Oyster Box in Umhlanga) — a smart move for a completely holiday-minded company.

I have since spotted stories about these hi-vis high flyers all over the internet. People are mad for them. Just imagine the frenzy of sun-deprived Munich dwellers, Jedi mind-tricked by the new Condor planes, frantically booking flights to Lanzarote, Puerto Plata or anywhere else that promises sunburns and real stripes. The masses may have visions of sticky, sandy days when they see those jazzy Boeings and Airbuses, but, in a sharp contrast, they make me think about how my life almost came to a very uncool end over Frankfurt.

Schapiro's memoir, formed from the stories he had told his son growing up, takes turbulence to another level
Voices
9 months ago

But let’s take this near-tragedy back a step. Pre-Covid, I’d flown on the airline from Frankfurt to Tenerife for a super-swanky champagne launch. The Spanish island off the top of Africa is a major holiday spot for Europeans, and the easiest way to get there is via low-cost carriers. Our island-bound Condor flight was packed with Teutonic types taking a time-out. The return leg began much the same way. My friend and fellow journalist Cath was seated on the opposite side of the aisle and we settled in for a four-hour prattle while sun-kissed German families snoozed. Truthfully, the entire flight passed by pleasantly; that is, until roughly a metre above ground, as we came in to land at Frankfurt. The wheels were down, tray tables securely fastened, when, suddenly, in a heart-seizing second, the plane accelerated and pulled up sharply.

There was a collective shriek of horror. The blood drained from my body. I turned to Cath — she was transparently white. The captain came on and spoke in clipped German. I tried to ask my other neighbour what he’d said, but she stumbled over her English, offering only, “There is wind.” A glance out the window — patently the stillest day on record in the Rhein-Main for a thousand years. Why were we now doing a full loop around the city, and seemingly coming in to land once more? I reasoned it had something to do with faulty landing gear.

When you’ve watched every episode of Air Crash Investigation, you know these things. But, moments later, we were easing towards the tarmac again. No one on the plane said a word. They’d obviously all watched the series too. And then, instantly, like absolutely nothing untoward had ever happened, we were on the ground, skidding to a slow, with a blast of passengers screeching and clapping.

It was then that the captain spoke again. “Congratulations,” he said in English, “this flight was my co-pilot’s final exam, and he has passed.” Cath and I sat inanimate, both continuing to do great impersonations of the undead. As we disembarked, the kind souls around me stopped to give their best to the new pilot. He was beaming. The two South African grinches did not — choosing instead to drag our adrenaline-drenched bodies into the closest airport bar for a vat of Spätburgunder.

Years later and I stand by the thought I had then — a full commercial flight doesn’t seem a great vehicle to take out for your final spin as a learner. Condor, note this: it might take a little more than new stripes to earn my trust as a flyer again.

Take a dose of ‘vitamin sea’ and immediately feel better