Ndzaba's passion project, Khayelitsha's Finest Wines, is a side hustle to sip and savour 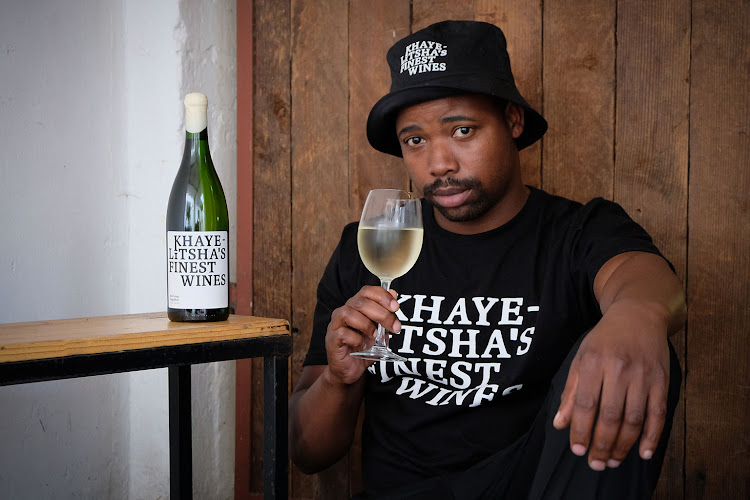 Lindile Ndzaba breezes in, a bottle of wine in each hand (prior to the booze ban) and a broad smile on his face. In his mid-30s, affable and quietly confident, he has the gently simmering fervour of a man on a mission. And for Ndzaba, it’s a mission that began with mourvèdre.

While his day job sees him managing the floor at a local artisan butchery and deli, it’s soon obvious that Ndzaba’s real passion lies not here, in Cape Town’s city centre, but in the townships that sprawl east of the city.

We’re chatting at Clarke’s Bar & Dining Room, just across the road from where he got his start in hospitality more than a decade ago. That was at &Union, back then arguably the hippest bar in the city. While the regular tastings held there sparked his own passion for wine, they also highlighted the disconnect between the quality of wines sold in the city and those available in township taverns. How to reconcile the two?

With inspiration and guidance from colleagues and friends, he soon found the answer. In December 2018, the first corks were pulled from bottles of Khayelitsha’s Finest Wines’ maiden release.

Pouring mourvèdre sourced from a cellar in Calitzdorp, Ndzaba’s goal was to introduce great wine to the bars, restaurants, and taverns of the townships surrounding Cape Town. There’s a deep irony that Khayelitsha — where Ndzaba was born and still lives — is only a few kilometres from the verdant vineyards of Stellenbosch but may as well be on a different planet for the (lack of) access most residents have to the fruits of those vines. Ndzaba was hoping to change that.

“That first batch was very well received. But it was really different to what people in the townships were used to, so there was a lot to be done in educating the market,” he says. Challenging local palates was exactly what he was aiming for. “People do get intimidated by wines that they don’t know. They have a tendency to drink one style of wine, one cultivar, but there are so many out there to discover.”

Ndzaba isn’t setting out to make his own wine just yet. Rather, he is a negociant, sourcing small-batch wines — the “juice”, in industry-speak — from selected winemakers, for his own bottling and labelling.

And the response from the wine industry has, he says, been encouraging: “They have been really welcoming and supportive, especially the farmers and winemakers. Khayelitsha’s Finest Wines is something new for them. There are lots of winemakers out there who don’t have access to the township market, so I want to create that bridge.”

People do get intimidated by wines that they don’t know. They have a tendency to drink one style of wine, one cultivar, but there are so many out there to discover

The Khayelitsha’s Finest range changes constantly, with Ndzaba favouring an ever-changing carousel of small batches, meandering between the cultivars and regions of the Western Cape.

When the brand launched, it was with a mourvèdre. Later, there was a “lip-smacking” semillon from Catherine Marshall Wines. Right now, it’s a Cape white blend in the bottle, with a new red wine under negotiation.

Punting unusual cultivars and new styles of wine certainly isn’t the easiest route to selling wine in a nascent market, though.

“In Khayelitsha, people mostly drink sweet wines, so the style I’m bringing in is quite different,” Ndzaba admits. “People are often intimidated by the cultivars, but it’s just a matter of giving them a taste, teaching them about the quality of the wine. When they taste the wine, they love it.”

Price points are also a huge challenge, Ndzaba says. He often has to convince sceptical punters that it is worth spending R150 on a single bottle, rather than a 5L box.

“It’s about education and under-standing where your market is. The enlightened market in the township — those who know about the product — they don’t mind paying for the wine at all. But the curious ones, phew, it’s a mission. But they are coming around, slowly, slowly.”

Along with bringing a wine culture to his own community, Ndzaba also wants to see the economic benefits trickle down closer to home. “The market in the townships has, for a long time, been dominated by the large corporate producers, the big brands. At the moment, when wine is sold, the revenue is not circulating in the township. We have such a problem with unemployment, and I hope my brand can do something to help that.”

To grow the brand and bring more township drinkers into the fine-wine fold, Ndzaba runs pop-up tastings at township taverns and markets, collaborates with local eateries, and hosts his own events, the Khayelitsha Wine Jams. Today, his wines are sold at more than a dozen outlets in the larger townships surrounding Cape Town, from bars and taverns to art galleries and restaurants.

“For now, it’s my side hustle, but Khayelitsha’s Finest Wines will end up being a full-time project. That’s definitely the plan,” Ndzaba says.