Debbie Hathway talks to living legend Kurt Klaus, one of the main influencers of the fortunes of Schaffhausen-based watchmaker IWC 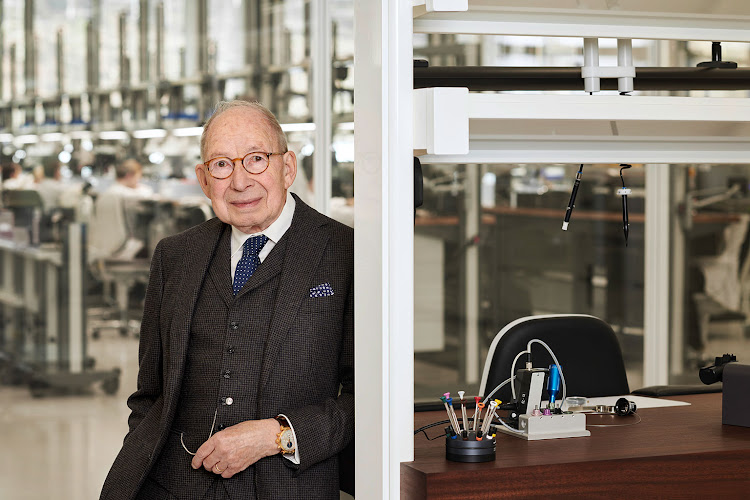 Kurt Klaus is world famous for his perpetual calendar, but his aptitude for micromechanics shines through several International Watch Company (IWC) masterpieces. His interest in small mechanisms, particularly mechanical watches, manifested when he was a young boy and led him into watchmaking. The first in his family to pursue this as a career, he is not the last — his granddaughter also qualified as a watchmaker and they enjoyed several years working together on new prototypes at IWC before she turned her attention to marriage and raising a family. “I am a great-grandfather, but I don’t feel like one,” he says.

After completing four years of watchmaking studies in the French part of Switzerland, Klaus wanted to return to the east where he was born in 1934. As IWC was the only watch manufacture in these parts, he approached them for a job. They accepted the young watchmaker into the workforce and he started in January 1957. Two months later, he married Martha, who has been at his side throughout his 63-year working life.

Klaus may be past retirement age, but there’s no sign of him actually stopping work anytime soon. “Still now, at age 86, my mind is active in watchmaking. I’m travelling, attending conferences, marketing IWC, being interviewed… as long as I do this I think I will be young. I won’t stop,” he says. “IWC also wants me to continue. I have good contact with CMO Franziska Gsell and CEO Chris Grainger-Herr. They say — and I say — that storytelling is one of the most important marketing tools. I have spent almost 20 years travelling round the world, maintaining contact with consumers, telling my story, and the story of the mechanical watch.”

Klaus starred in a series of short films about the smart watch last year, in which he tried to get to grips with what he calls “cheap watches”. While the smart watch has found traction in some markets, Klaus says the future of mechanical watches is in the production of high-quality and complicated pieces. “People are fascinated by the micromechanics of watches. They can follow when I explain how the perpetual calendar functions and they like the story behind it. It is not possible to understand the function of cheap watches. The fascination with mechanical watches will continue and IWC, since we have our new manufacture, will also continue.”

As an aside, Klaus references all but Florentine Ariosto Jones, who founded IWC in 1868, and Ernst Jakob Homberger, who led the company from 1905, in his reflections on his brilliant watchmaking career. A little-known fact is that Homberger’s brother-in-law, psychiatrist Carl Jung, was also active in the company. It was Homberger’s purchase of Jung’s shares in 1929 that led him to be sole proprietor. He steered IWC through the economic crisis of the ’30s and, inspired by his two aviation-enthusiast sons, launched the Special Pilot’s Watch in 1936. The first Portugieser was also made under his management in 1939.

Homberger appointed technical director Albert Pellaton, who was Klaus’ teacher. “He taught me more than how to repair watches. He showed me what real watchmaking is. This was a wonderful time with him, and I learnt a lot, working as his assistant and making some prototypes. He was a strong master for me. I had to do my best for him. But it seems it was ok, ja?” Klaus chuckles. 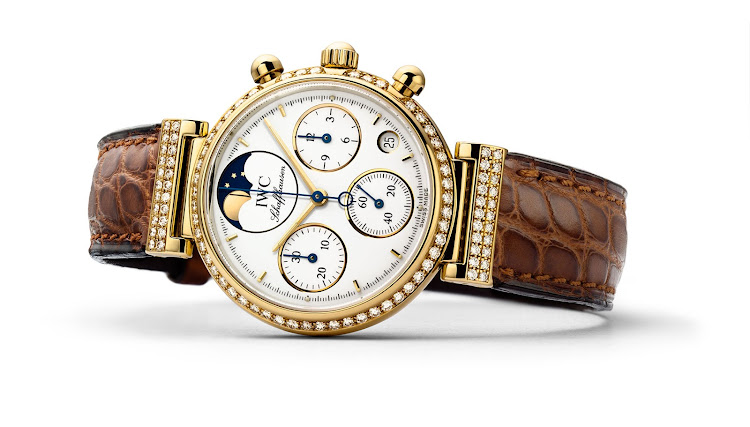 In the 1970s, in the era of quartz, IWC produced only very simple watches, wristwatches, and lots of pocket watches. “To make the mechanical watch more interesting and attractive, I created a calendar system on a pocket-watch movement. Management felt it would be difficult to make and to sell so we made a small experiment of a series comprising 100 pieces. We launched it at the Basel watch fair in 1976 and sold out in two days. This was the motivation to continue,” he says.

By the end of that decade, then sales director Hannes Pantli told Klaus that IWC could no longer sell pocket watches but that he must continue experimenting with the wristwatch. “The perpetual calendar was not new. It was great, but it was very complicated. I thought I could produce one in a wristwatch, which wasn’t there before,” says Klaus.

He did it with the blessing of Günter Blümlein, CEO at the time, who suggested Klaus take it a step further – make a wristwatch perpetual calendar mounted on a chronograph movement that they had just produced for Porsche Design and create the most complicated wristwatch in the world. “I worked on that for almost five years. I wanted to make it as simple as possible — simple for production and very easy to use,” says Klaus. “In 1984, I made my first prototype. At this time I was completely alone in the engineering department. Sometimes I think that was one important reason behind the success. Nobody was involved, so I was never under stress. And Günter trusted me.”

But how does he keep calm under the circumstances, I wondered? “I was thinking day and night. I had four racing dogs that I trained myself, and when I walked them I used to solve a lot of my problems. It was not really a stress because I believed I could do it.” 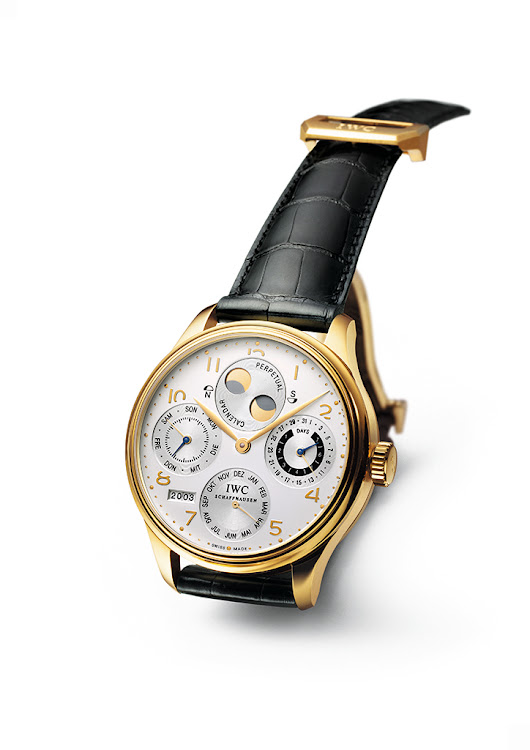 Klaus revealed three prototypes at Basel in April 1985. “Named by Günter after one of the most important inventors of all time, the Da Vinci Perpetual Calendar was the first really complicated IWC watch. It was a fantastic success and the start to a new era for IWC.”

They were able to deliver to the market by August and by November the same year were celebrating the sale of the first 500 Da Vincis. “Of course, this was a hard time. The financial crisis (of the ’80s) was not really over, but this was a good thing financially.”

The perpetual calendar has a year indicator, and it was the first time this had been included in a wristwatch. “It works until 2499, but there’s one problem — the leap year. To indicate 29 February correctly every four years is no problem. The problem is that every 100 years, there is no leap year. So in February 2100, our Da Vinci indicates 29 February but it’s actually 1 March. So, it is necessary to adjust it then,” says Klaus. “Every 400 years, it’s an exception of the exception. And it is a leap year. I was happy the year 2000 was a leap year and everything was correct.”

He says, of course, the watch has to be serviced from time to time — as all mechanical watches do — but theoretically it is possible that it will work to 2100. “In my experience, in watchmaking, it’s not so long. I, myself, successfully repaired working watches that were more than 100 years old. The quality of our IWC watches means they will last for a long time.” 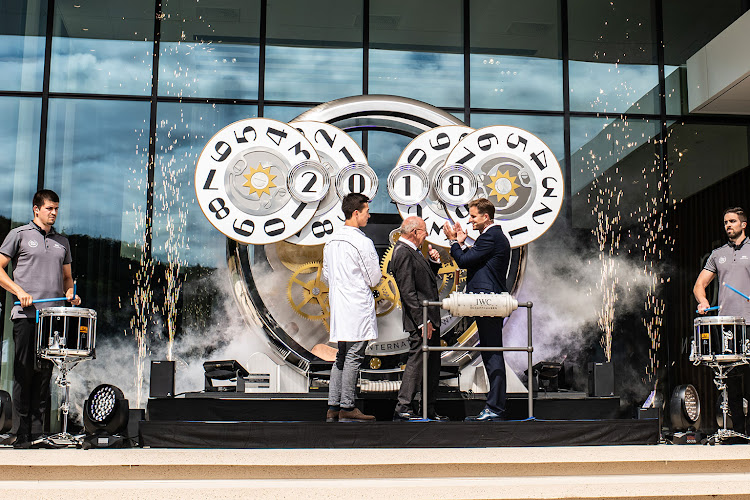 When Klaus celebrated his 80th birthday, IWC hosted a small event in his honour at the manufacture. Then CEO Georges Kern promised him the first new Da Vinci produced, a promise he fulfilled when he left IWC two years ago. “He brought me the Da Vinci Perpetual Calendar in a red-gold case as a gift — so this is now really 100% made by IWC. The basic movement, the calendar and the case are all made in the new manufacture — I could say it is an idol really. It is a real happy ending for the calendar.”

What keeps Kurt Klaus young? “During my active time, I was developing new things. I had my racing dogs, who needed daily training at 6am before I started work. I think this is maybe one of the most important things to keep healthy. Even now in coronavirus time, I feel healthy. Today I have the big king poodle, Janosch. Every day, Martha and I walk him in the forest for one or two hours. Janosch helps to keep us young. He is a wonderful dog for us.”

Fascination turns to love: Piaget CEO Chabi Nouri on the value of heritage

The director of image, heritage, and style elaborates on the “very Cartier” nature of watch design that transcends time
Watches & Jewellery
1 year ago
Next Article
© Wanted 2022 - If you would like to reproduce this article please email us.