Part of the attraction and thrill an art auction presents has to do with viewing artworks that have been out of circulation for some time. Some have never been seen by the public before; such as JH Pierneef’s Farm Jonkershoek with Twin Peaks Beyond, Stellenbosch, which will go under the hammer this evening, at Strauss & Co’s auction at the Wanderers Club in Johannesburg.

For Alistair Meredith, a senior specialist at the auction house, this painting isn’t only special because it is not well known but due to it aptly capturing the language the artist arrived at after being heavily influenced by the Art Nouveau movement and the geometric principles he adopted after a trip to Amsterdam in the early 1920s.

It was a struggle getting there. The first artworks he showed in South Africa that revealed this influence had not been well received.

“The critics responded positively, but the large exhibition he put on at Polliacks (a music shop in Pretoria) that were out and out geometric, was a financial failure. No one wanted to buy them and he returned to his tried and tested style,” says Meredith.

Farm Jonkershoek with Twin Peaks Beyond, which is valued between R6 and R8-million is therefore an example of a compromise the artist reached after his disastrous exhibition at Polliacks. The pink twin peaks in the background are framed by the art nouveau stylised trees in the foreground, imparting this idea of viewing nature, the South African landscape, through an Art Nouveau inspired gaze.

While this unseen Pierneef might cause excitement, a portfolio of 41 images by the world-famous photo-journalist Greg Marinovich which document a brutal war that played out in the country’s townships in the early nineties, are difficult to look at again. A man’s body is suspended mid air as a bullet hits him. A soccer team resplendent in their club’s regalia encircle a fresh grave. A man runs through the street with a gun in his hand. Tyres burn on a street. 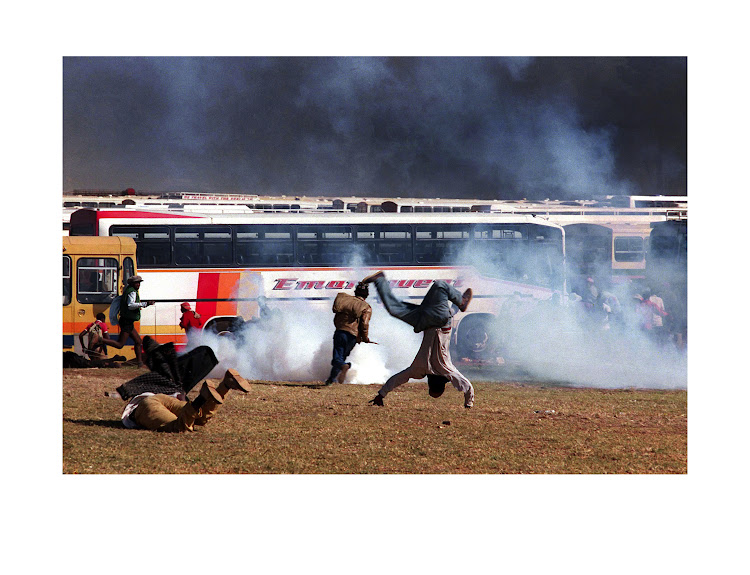 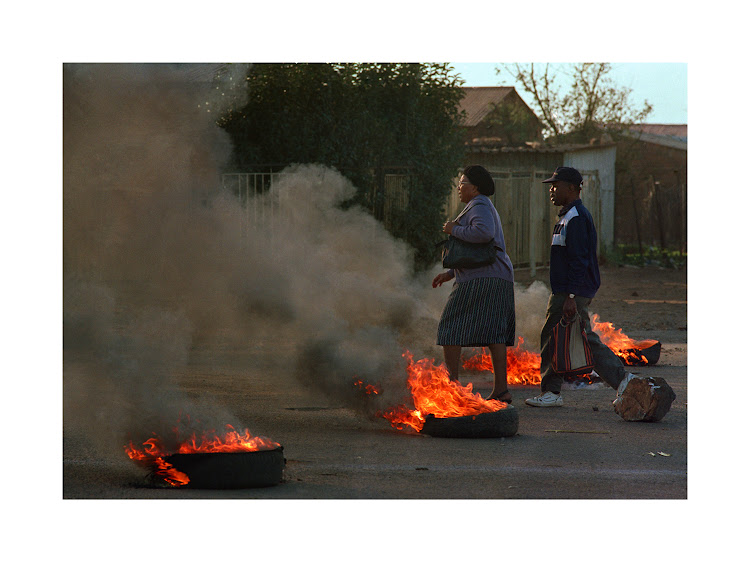 The portfolio of images from this era brings home the raw everydayness of death, the devaluing of life that marked our political history.  You can detect it in images where a body lies uncovered. Subjects are depicted sitting beside or walking past the dead as if their passing is insignificant. How could it have come to this and would our nation, our national psyche, emerge unscathed from this horror?

These are some of the questions that Marinovich’s essay provokes particularly in conversation with artworks produced in the 90s by William Kentridge, Norman Catherine and Anton Kannemeyer, which will all be on public view at the Wanderers.

They were difficult times to process and make sense of, asserted John Leyden, one of the members of 90s pop sensation Mango Groove, that featured Claire Johnston as the lead singer. Leyden felt compelled to write the hit song Another Country as a means of coming to grips with the Boipatong massacre, which took place in the Sebokeng Township in 1992. Forty-one people including children were murdered during a vicious politically motivated attack.  The band approached artist William Kentridge to create the music video. He had yet to become world-famous, but he was known locally for his stop frame animation films tracing violence and corruption.

Two of the charcoal drawings he made for the animated parts of the music video, which will also go under the hammer don’t reflect the massacre. They present an empty billboard (or cinema screen) and a megaphone. These two typical motifs of his art function more like vessels to carry a message rather than to transmit one.  As such you are left with a sense that he was preoccupied with the tools of influence rather than the content or substance of it. These charcoal drawings embody his characteristic aesthetic and due to their use for a Mango Groove video and rarity, they are valued between R1,8 and R2,5 million.

The role pervasive police brutality played in the cycle of violence defines Norman Catherine’s Predator, a very bold painting he created in 1993. It will join this pseudo 90s retrospective at the Strauss & Co Auction. A blood red background frames a vicious looking policeman with sharp teeth that are echoed in the spikes on his cap and uniform.  He has a tongue like that of a snake.  Treacherous cactus plants surround a Zulu hut, which offers an escape if you can get past the cop.

Marinovich, who spoke via a video link at a Strauss & Co event to discuss the 90s flashback, certainly was nostalgic about the 90s, and suggested we shouldn’t so easily dismiss the euphoria that followed the violence and loss.

“We must not forget what ordinary people did for us to achieve this moment of transition,” he said.

As always it will be interesting to see which artworks will transition to new owners, and at what prices, during the auction on Monday evening. It is hard to put a price on a decade of transition but the sale of Marinovich’s portfolio will give us some idea of its financial worth.

We Are Egg: A cracking new, revolutionary store ...

SA's fine furniture to go under the hammer with Tonic ...

The pioneer spirit of Longines

Voices /Profiles
© Wanted 2020 - If you would like to reproduce this article please email us.
X