South Africa has surfed the wave of the craft beer revolution — and while there is little indication of the thirst  for small volume, hand-crafted amber brews tailing off, there is a notable increase in the interest in artisanal spirits, gin primarily.

Vodka is still the most popular white spirit globally, with about four times the sales of gin, but it’s the latter, botanically driven spirit that is showing the most growth, with  a 40% increase in sales compared to vodka’s 8%. Gin’s abundant vibrant flavour personality is diametrically opposed to vodka’s neutrality.

It’s the very growth in popularity of cocktails that has assisted the renaissance of gin. Did you know there are more cocktails based on gin than there are vodka- or whisky-based cocktails? Bartenders and mixologists know there’s a gin for every taste, depending on the botanicals used in its distillation. The potential is boundless.

So, what is gin? It starts out as a neutral spirit, usually distilled from grain — although in South Africa some producers use wine as the base. It’s then distilled a second time, which is where it gains its character with botanical elements — specifically juniper berry, providing the distinct aroma and flavour. Other botanicals used are: cinnamon; coriander; star anise; cardamom;
orange, lemon, lime or grapefruit peel; angelica; nutmeg; orris root; liquorice root; and almond.

In 2015, the British Daily Telegraph reported that the market for gin had grown in value terms from £700-million to more than £1-billion between 2010 and 2015. Where shops used to stock about 27 “old faithful” brands, this has doubled to more than 50 different labels, many of them artisanal and boutique crafted. In fact, boutique gins make up one quarter of the market in the

United Kingdom, which is driving much of the growth and interest worldwide.
It might be hard to comprehend, but Britain is not the world’s biggest consumer of gin. That title belongs to Spain, a country that has long been the largest gin market globally, with (surprisingly) Belgium in second place. In 2015 alone, 2 000 new gins made it to shelf in Belgium. South Africa is no exception when it comes to the uptick in gin consumption — and is in the rather remarkable position of being able to get truly unique gins into the hands of consumers.

Our abundant diversity of plant life is what’s driving many of the local gin distillers, which are revelling in almost alchemical rapture at the rich fynbos heritage South Africa possesses.

The somnolent seaside town of Stilbaai, on the southeast Cape coast, is home to the Scott family’s Inverroche distillery, where the name of the original, handmade 1000l still is Magnanimous Meg.

Inverroche was the first brand to produce artisanal gin using South African fynbos in the final distillation and has grown rapidly, to the point where a second still was procured during 2016 to keep up with burgeoning demand for its Classic, Verdant, and Amber gins.

The inclusion of late summer blooms from the veld in and around Stilbaai joins the more traditional spices and botanicals in Verdant, and it’s these flowers that give it a slight green hue. Amber incorporates the tannin-rich coastal botanicals from the region, hence its lightly earthy nuances, with the more traditional juniper and spice expression, as well as its rich amber colour. It’s important to the Scotts to tread lightly on the earth, which is why Meg is heated the old-fashioned way — with a wood fire. Invasive alien vegetation such as black wattle or Port Jackson is used as a fuel source for the copper alembic still.

Simon von Witt, the man behind Cape Town’s Woodstock Gin Company, also revels in expressing the flavours of South Africa. Von Witt, an engineering consultant who used to make liqueurs on the side and sell them at weekend markets, was encouraged to begin experimenting with gin by friends.
It’s become a full-time job and he is upgrading from a 100l still to a 400l still, which will allow him to produce 100l of gin a day. He, too, makes three gins: Inception distilled from a wine base; Inception distilled from a beer base; and the unique High Tea gin, in which he infuses rooibos and honeybush.

Nearby in Salt River sits the converted warehouse that is home to Hope on Hopkins, run by former lawyers Lucy Beard and Leigh Lisk. Because it was the first distillery to open in urban Cape Town, the duo faced a number of regulatory hurdles, and so was licensed to begin distilling only in July 2015 —
more than a year after the team intended to open its doors.

Since then, it’s taken off, and Hope on Hopkins has become a popular place for visitors, who are accommodated by appointment. Two gleaming stainless steel stills — Mildred and Maude, 600l and 350l respectively — occupy the large airy space. “It’s interesting to see the demographic of the people who take the trouble to visit us,” Beard says.

“They’re young adults, young professionals, and even varsity students. And they are very knowledgeable when it comes to gin; everyone is looking for something unique — which is what we offer.”

Hope on Hopkins has three products in its core range: the duo’s take on a traditional London dry style; Salt River gin, which Beard says celebrates South Africa by using buchu, hand-picked kapokbos (wild rosemary), and citrus from the Cederberg; and a Mediterranean gin in which olives, basil, rosemary, thyme, and cardamom feature. Beard also produced a pink summer gin earlier this year using pomegranates, as well as a winter gin that was heavy on cloves, orange zest, cinnamon, star anise, and other spices. “It’s great to experiment and play around with the botanicals,” she says.

“Although our juniper is imported from Europe, we try to use natural and 100% organic botanicals — and we’re really lucky to have a fantastic guy who supplies us with buchu and kapokbos, which is picked in the wild.”

Organic and natural is something that Blaauwklippen cellarmaster Rolf Zeitvogel also strives for when making Triple 3, the latest product from the Stellenbosch wine estate.

“We’ve had a still for making eau de vie for the past four years, but we started
making gin in 2015,” he says. And to say that the interest has overwhelmed
Blaauwklippen would be an understatement. Annual production is being ramped up from 18 000 bottles to 30 000 bottles to meet demand.

Again, there are three versions in the range: an unusual 100% juniper gin; a citrus infusion made from citrus from Addo in the Eastern Cape, as well as organic lemons grown on Blaauwklippen; and an African botanicals bottling containing rooibos, buchu, liquorice, galangal, and almond.

You’ll find Time Anchor Distillery in Johannesburg’s funky Maboneng precinct
in Doornfontein. The woman behind the gin is Shanna-Rae Wilby, who opted
not to follow the fynbos herd. “I didn’t want to go that route,” she said. No real
surprise there, since her interest in distilling started during her University of
KwaZulu-Natal student days when she got a reputation for producing Skittleinfused vodka for parties.

So she consulted South African herb guru Margaret Roberts about developing
a flavour that would still be unique. “She suggested rose geranium, which is
what we did, along with honey and honeybush, because I’m a nougat nut!”
Wilby says.

Interestingly enough, there are apparently 26 different varieties of honeybush
and, when added to the distillation, Wilby found they imparted too much tannin.

“We only use one — and it’s also the most endangered — so it’s grown specially
for us in the Port Elizabeth area,” she says. “Fortunately, we don’t need a huge
amount when we distill.”

Something that plays a crucial part in the enjoyment of gin is the tonic
used. “Tonic can make or break a gin,” Wilby says. “We recommend Fitch
& Leedes or another South African producer, Barker & Quinn, which is made
in Paarl. We urge folks who buy gin from us to try the same gin with three or
four different tonics, to see which they prefer — and also to taste the difference
for themselves.”

No doubt researchers could have a field day investigating the reasons
behind the interest in all things hand-crafted and artisanal, drawing parallels
between the fast pace of life, use and power of technology, and a general
nostalgic hankering for a simpler, less frenetic, more natural existence. But
when it comes to the simple enjoyment of the juniper-infused spirit, Churchill
was right: it’s a lifesaver. 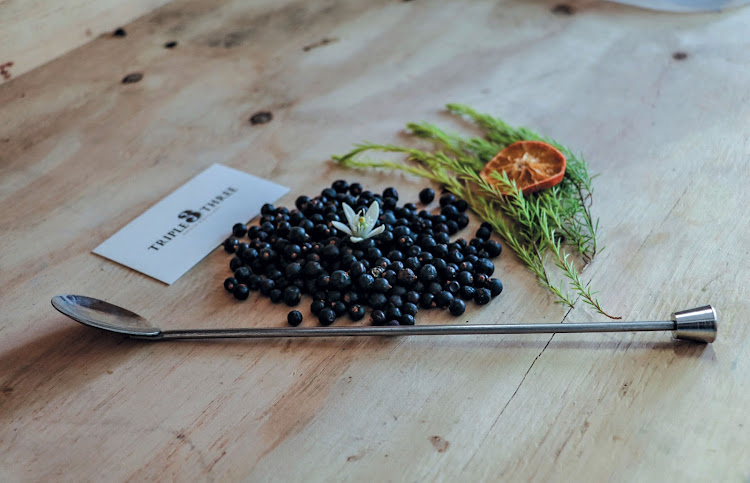 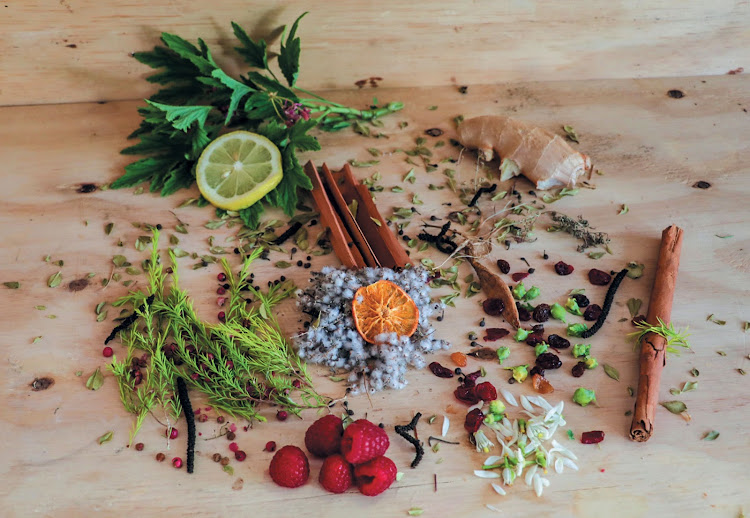 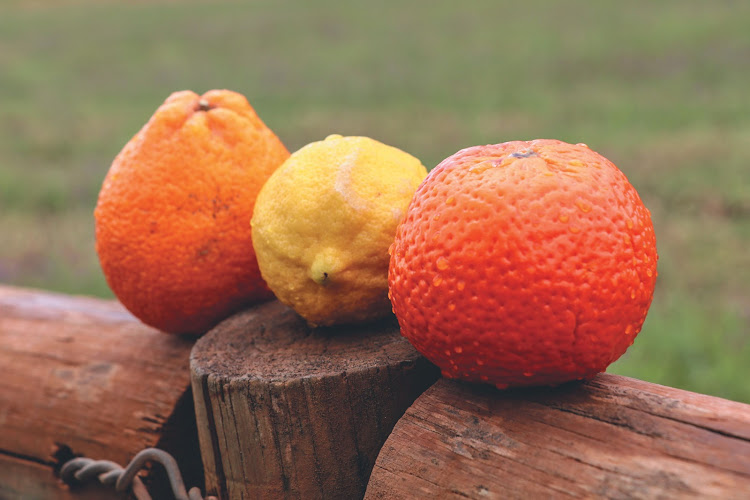 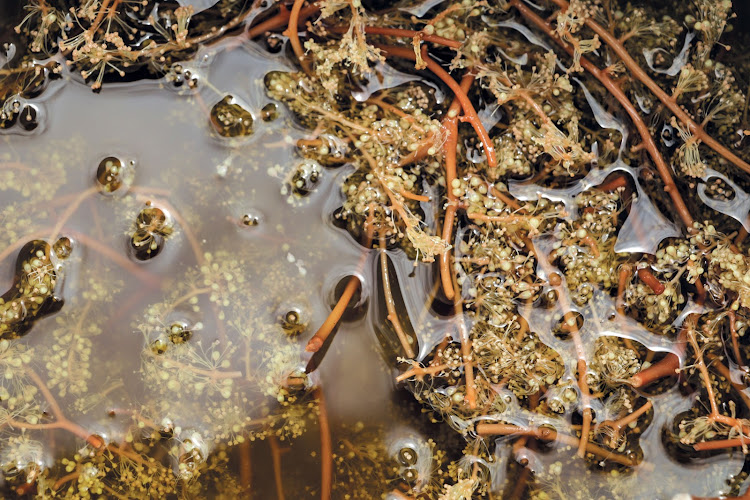 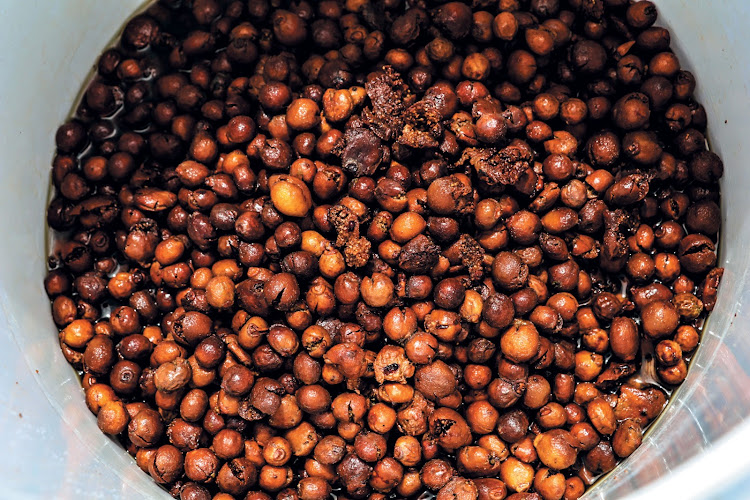 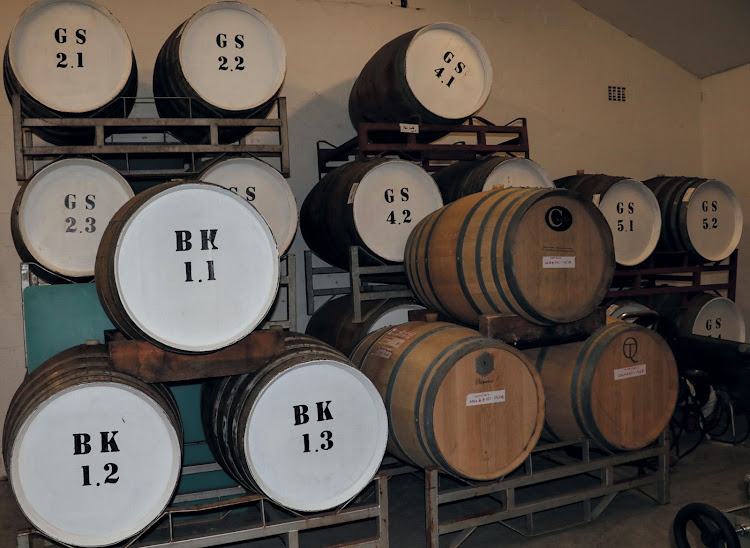