A cup of tea is a cup of peace — Soshitsu Sen 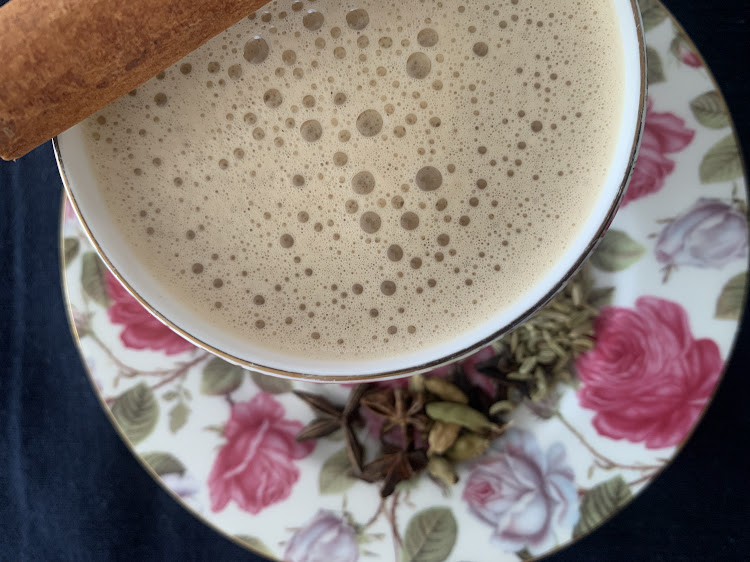 I would not be overstating the case when I say that tea played a significant role in my family growing up. A steaming cup of tea at breakfast signified the start of a day, sometimes accompanied by a slice of buttered toast, as you dashed out the door, or to bookend a long workday as you caught up on the day's happenings seated on your favourite armchair. It was a soothing elixir to settle nerves after receiving bad news or happy news, for that matter.

If my mother carefully brought out the special cups and tea towel, it was a given that esteemed guests were arriving momentarily, which also meant that best behaviour had to be on show. Sweet tea freshly brewed with steaming hot milk is a clear marker of hospitality at most homes. At family gatherings, not a minute after you've had your fill of biryanis, dhals, curries and rotis would an auntie invariably announce that you must stay for tea.

I remember uncles bringing out huge kettles of piping hot tea deftly poured into white polystyrene disposable cups to go with samoosas, chilli bites and sweetmeats (allow me to allay any concerns, sweetmeats have nothing to do with meat of any kind. Also, I have no idea why these wonderfully rich and delectable little sweet treats, including burfee, gulab jamun and jalebi, are called sweetmeats).

A ‘Chinese dombolo’ you cannot forgo

Second only to bottled water, 297-billion litres of tea were consumed globally in 2021. China dominates the global tea market with $78.7bn in revenue in 2020. The story of tea has its genesis in about 2737 BCE. Legend has it that mythological Chinese emperor Shennong (the “Divine Farmer”) was seated under a tree while his servants boiled drinking water. By happenstance or fate, some leaves from the tree fell into the water pot. Being a herbalist himself, Shennong decided to taste the drink, and he found it to be pleasant tasting. That tree was the Camellia Sinensis that would later be known as the tea plant. The concoction quickly spread across China and Japan for its flavour and medicinal properties.

Tea was introduced to Europe by Portuguese traders and missionaries during the 16th century. Seeing an opportunity to challenge Portuguese trading routes, the Dutch imported the first commercial shipment of tea into Europe from trading posts in Java at the turn of the century. Today, tea is very much the epitome of British culture; however, it was due to Catherine of Braganza, the Portuguese queen-consort to Charles II and her deep love for tea that it was introduced to the English court. Charles II granted the British East India Trading Company the monopoly to import tea into Britain growing that company into one of the largest corporations in history. It was tea that would go on to have the most significant effect on the US because it was due to the high taxation on tea that the infamous Boston Tea Party essentially catalysed the American War of Independence and forever change history.

A plethora of different tea blends that cover a vast range of tastes and preferences can be found on grocery shelves and, indeed, speciality tea merchants. For example, Fortnum and Mason, a British purveyor of fine teas with a royal warrant from Queen Elizabeth II, carries more than 16 different tea varietals that produce multiple other blends. Closer to home, we can be very proud of the distinct aroma and flavour of Rooibos tea that is enjoyed worldwide.

Most people are enthusiastic about sharing their favourite brewing method, whether with sugar or without, with milk or straight black, scalding hot or cold. Below you will find a family recipe for my favourite tea. Masala chai, or spice tea, is the perfect winter drink, infused with warming aromatic spices and served sweet.

A peanut stew with a difference
Food & Drink
6 months ago
Next Article
Commenting is subject to our house rules.
© Wanted 2022 - If you would like to reproduce this article please email us.