With a distribution centre in the US and a European office in Germany, Oscar Valladares has found the sweet spot between branding and great smokes 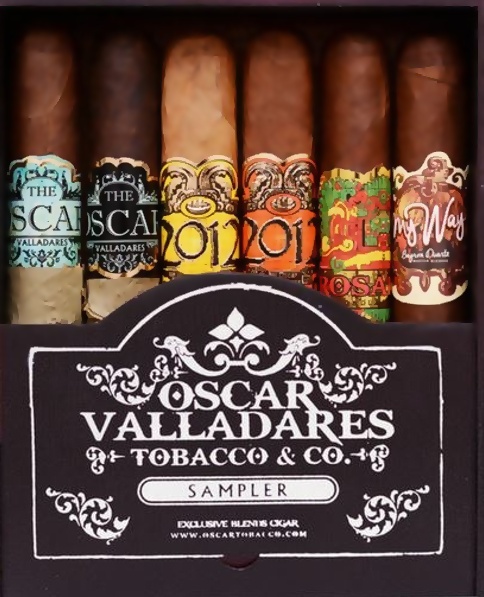 In the words of poet and novelist Margaret Atwood, “You’re never going to kill storytelling because it’s built into the human plan. We come with it.” I have always been a sucker for a good story; cloak anything in a good story and that’s the battle half won.

The world of cigars is wonderfully rife with stories, and one of my favourites is about Oscar Valladares Tobacco & Co, established in 2012 by Oscar Valladares, his brother Hector and Bayron Duarte. Their first “factory” was in Danli, Honduras and consisted of a table and two people.

Unlike so many cigar makers whose brands stretch back decades through multiple generations, Oscar Valladares’s cigar experience was working for Rocky Patel Premium Cigars for nine years having worked, previously, for a travel agency. While at the travel agency, he organised tours for to the Rocky Patel Factory and Rocky Patel was impressed enough to offer him a job.

For optimal enjoyment of your ritual smoke, time and space are important
Food & Drink
10 months ago

Bayron Duarte had about 20 years’ experience, having worked for both General Cigars and Oliva.

Now with a distribution centre in Houston in the US and a European office in Hechingen, Germany, Oscar Valladares has found the sweet spot between branding and great smokes.

Each of the Leaf By Oscar range comes wrapped in a tobacco leaf as opposed to Cellophane.

The Altar Q range pays homage to the Mayan Empire in Copan (in current day Honduras) with an image of a different Mayan ruler on each cigar in a box of 16. The box has imagery of the Copan Ruins carved into it.

The Oscar Valladares Ciseron Edition boxes have artwork from Honduran artist Elmer Ciseron Bautista, which is also replicated on the cigar band. There are five different images that would look as good mounted on the wall as they do on the box.

My favourite is the Super Fly series, which, in its own way, pays tribute to the 1972 blaxploitation film directed by Gordon Parks Jr and staring Ron O’Neal. The soundtrack written and produced by the now legendary Curtis Mayfield is a true classic that still gets some rotation in my home.

But, all of this would be for naught if the cigars themselves weren’t such lovely smokes. There is something for everyone. I tend to bounce between the Leaf By Oscar Maduro Robusto, the Super Fly Corona Maduro and the Wild Hunter Toro.

You can never go wrong with an Oscar Valladares and I, for one, can’t wait to get my hands on the new McFly cigar, launched in the US earlier this year, named after Marty McFly, Michael J Fox’s character in the Back To The Future movie franchise.

In response to the effect of Tropical Storm Eta, Hurricane Iota and the Covid-19 pandemic has had on Honduras, Oscar Valladares Tobacco, Rocky Patel Premium Cigars, Nova Cigars and Cavalier Genève came together to create the “Cigars for Hope” sampler box. Only 2,000 were made available, with the funds raised going towards various supplies, including medicine, clothing and food for communities hard hit by the storm, hurricane and pandemic.

Dominated by Oscar Valladares cigars, the Toro sized cigars in the box are:

About Time: How Louis XIII is preserving the cognac craft for the future

Sustainable farming, ancient arts and the appreciation of past and future, are pioneering the cognac industry
Food & Drink
9 months ago

The world-renowned chef is resurrecting his iconic eatery in the City of Gold
Food & Drink
9 months ago
Next Article
© Wanted 2022 - If you would like to reproduce this article please email us.