Mission R looks like the spawn of a Porsche Cayman and a Lotus Evora, and could be made by 2025 or 2026 to compete in cup races 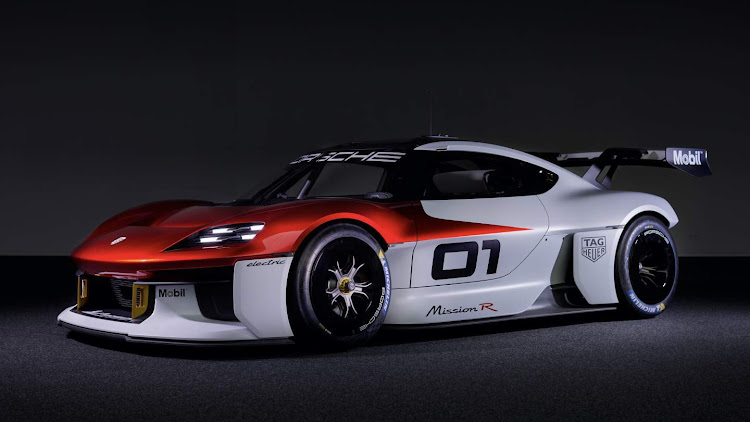 Powered by a single 80kWh battery in the centre of the vehicle, Porsche’s new Mission R concept car is neither approved for FIA racing nor street legal. But it offers a tantalising peek at the marque’s electric ambitions.

“It’s an idea of how customer motorsport could be in the future,” Holger Eckhardt, spokesperson for customer motorsports, said during a private video call with reporters in advance of the car’s debut on Monday at the IAA Mobility car show in Munich.

Eckhardt says the two-door, single-seat coupe could be made by 2025 or 2026 to compete in cup races like the Porsche Carrera Cup, a one-make series of private racing events that owners enter to test their track-suited cars against each other.

Since the late 1990s when it first started making them, the German auto manufacturer has sold 4,250 Carrera Cup racing vehicles. Such cars are highly tuned for searing on-track performance and stripped of weighty non-essentials like radios, carpeting, and even extra seats.

Bentley tests its futuristic biofuel by climbing up Pike’s Peak

The luxury car maker is using this performance to kickstart what will be its biggest effort in the company's 102-year history
Cars, boats & planes
11 months ago

Race car of the future

From the outside, the Mission R looks like the futuristic spawn of a Porsche Cayman and a Lotus Evora. It has a low, flattened roofline, 18-inch racing wheels, and a high racing spoiler on its rear. Four-point high-intensity LEDs — uncovered by any glass shield — comprise its unique headlights, while a red lightband is the main tail light. It’s able to race, hypothetically, for 30 to 40 minutes and at speeds approaching 3209km/h all on one charge, and can be charged again to 80% capacity in 15 minutes using special Porsche chargers.

Inside, the Mission R incorporates multiple novel inventions aimed to help its driver achieve superior times on the track. It comes with a helmet holder and dryer built into where the passenger seat goes, which also disinfects the protective gear. It sports dual cameras inside the cabin that show the driver from different angles for adoring fans (and that all-important Instagram or Twitch post). A single air vent lodged in the ceiling blows cold air directly at the driver’s face. Elsewhere, the door panels are made from flax-composite natural fibres, a sustainable alternative to carbon fibre and offer a smaller CO² footprint, Porsche engineers say. 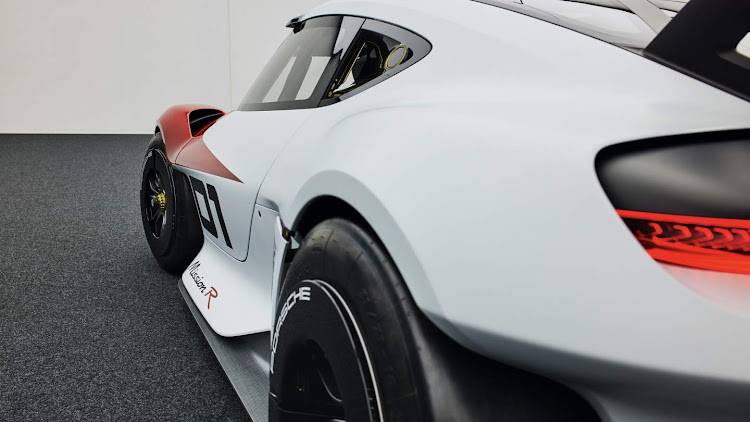 The car also has a carbon-fibre roll cage integrated directly into the roof, which helps save weight and maintain a low roofline but is as yet noncompliant for FIA racing.

Porsche’s brass seem unconcerned. “We will try to convince the FIA,” Eckhardt says. “It’s an idea. Clearly, there are some details of this Mission R which are not usable at the moment in motorsport.”

The announcement came as electric ambitions continue to accelerate at Porsche, the most vital brand for parent company Volkswagen AG’s shift to electric vehicles. VW has been public about its aggressive plan to remove Tesla from the electric vehicle throne by 2023; along with Audi, Porsche has made the strongest moves in that direction.

In July, Porsche formed an alliance with the Croatian tech company Rimac Automobili. The deal stipulates that Rimac holds 55% of a new Bugatti-Rimac venture, while Porsche owns the remaining 45%. Earlier this year, Porsche had also separately increased its stake in Rimac to 24%. Rimac didn’t contribute to the development of the Mission R, but could contribute to future elements of the vehicle, Eckhardt says. 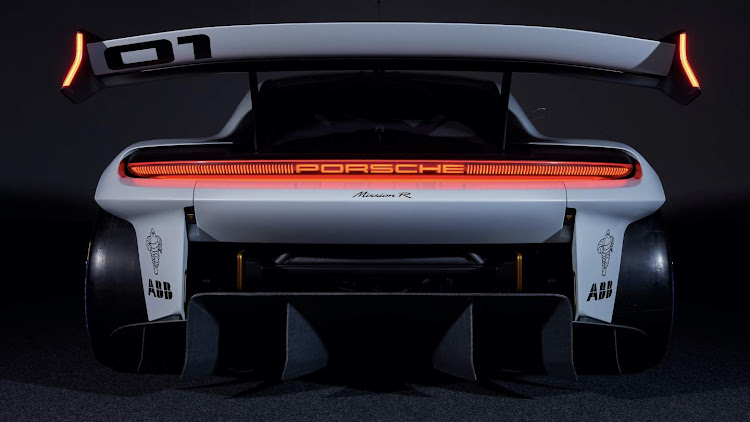 Porsche’s current electric programme bodes well for future products. Its four-door electric Taycan beat sales of the extremely profitable Porsche 911 in some markets. In the first half of 2021, Porsche delivered 5,367 Taycan models in the US, compared with 5,108 911s delivered. Globally, Porsche delivered 19,822 Taycans and 20,611 911s over the same time period.

Meanwhile, further hybrid and electric variants are planned. “Porsche will be a key competitor to Tesla in 2022, with a longer-term aim to fully electrify its entire range by 2030 (bar the 911),” Bloomberg Intelligence automotive analyst Michael Dean wrote in his August market report. “Porsche has already raised the tech bar in terms of battery-charge time and reproducible power on the Taycan, and has luxury Ebitda margins approaching 30%, almost 50% higher than Tesla in 2022.”

Matthias Scholz, Porsche’s director of GT race cars, declined to confirm whether the Mission R would be produced as a road-going, higher-volume production vehicle. But as the company develops cars like the 718 Cayman, it’s natural for some overlap to occur, he says. Another Porsche spokesperson, Frank Weismann, confirmed via email that “technical details [of the Mission R] will be tested and shown in corresponding prototypes in a timely manner.”

If the racing version of such a car were made, pricing would fall somewhere in between the cost of other cup cars ranging from €150,000 to €1 million, Scholz says.

Bloomberg News. More stories like this are available on bloomberg.com

The famed Italian sports-car brand's 296 GTB has both power and emotion
Cars, boats & planes
10 months ago

The luxury car brand is in a position to show off a production version of its upcoming Valhalla model and start discussing specifications
Cars, boats & planes
11 months ago
Next Article
© Wanted 2022 - If you would like to reproduce this article please email us.