Investing in a window on contemporary SA life 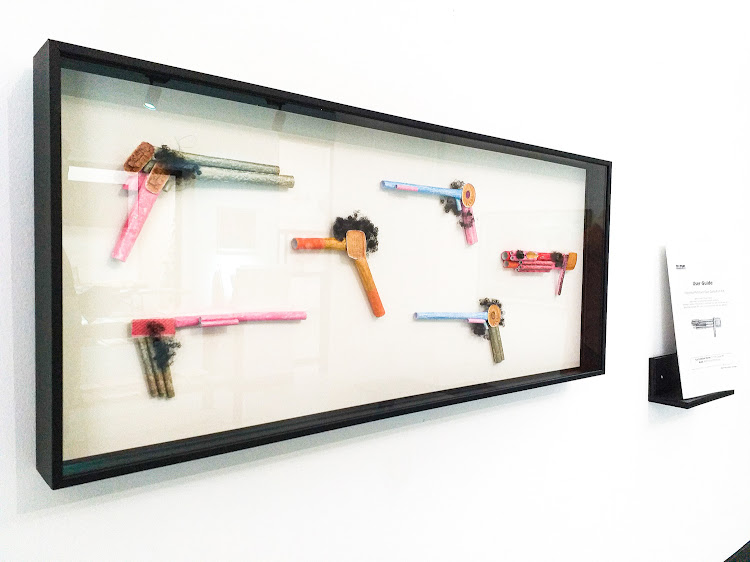 Art is often a mirror on society, and  in a country as multifaceted and complex as SA, these reflections — regardless of the medium — can be at once unsettling, sentimental and thought-provoking. This month we look at artists on the knife edge of making a living while also offering a considered and poignant perspective on contemporary SA.

Lebogang Mogul Mabusela, aka Monotypebabe, is the founder of Makoti Technologies TM. Established in 2017, it’s a bridal gift shop that turns patriarchy and convention on their heads.

“I was eight years old and I was a flower girl at one of my relative’s weddings,” Mabusela says by way of explanation how her bridal emporium came about. “This old lady started opening the gifts that were addressed to the couple and started to say all these things about how these objects can be used to appease the in-laws and the husband; you know — how to be a perfect wife.”

Five art events not to miss this October

Ruminating on this and the various social rituals mainly focused on male satisfaction, Mabusela created a bridal shop in direct opposition to these conventions. “Instead of the typical things you’d find for brides, it would be these femme weapons, traditional things like doilies but turn them into Gunz. Something that helps women, that becomes about empowering them,” she says.

Mabusela’s Gunz each come with user manuals that give helpful advice on how to use them as weapons, and these manuals are artworks in themselves. “The latest Gunz are like proxies of body parts. Like mnemonic sexual objects,” she tells me.

It’s hard not to see Mabusela’s work in relation to the shocking rate of femicide and violence against women and children in SA. As part of the Griffin Art Project Worldling Residency earlier this year, she designed Gunz titled Cutlery as a way of calling attention to the home as an unsafe space for many SA women, especially during the Covid-19 lockdown.  Her monotype prints similarly incorporate seemingly innocent, innocuous domestic objects like paper doilies, but the works themselves carry titles laden with innuendo and meaning.

A curator as well as an artist, Mabusela recently exhibited at the Cape Town Design Indaba as part of the 50 Emerging Creatives class of 2020, and was also a runner-up for the Young Women Studio Bursary at the Bag Factory Artist Studios in Fordsburg. 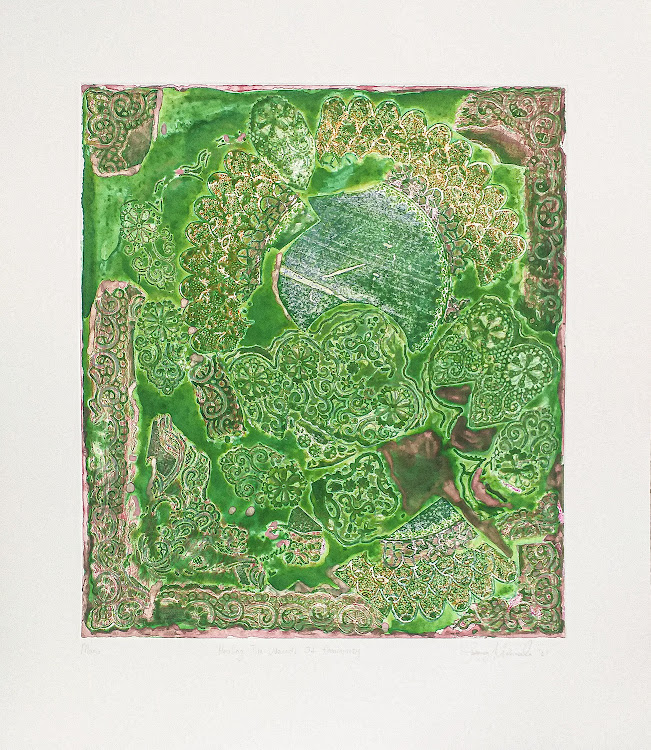 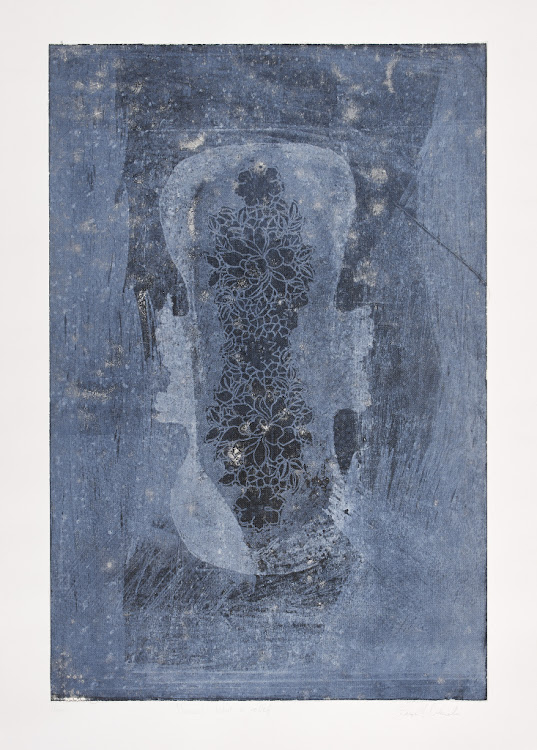 Minenkulu Ngoyi is a man of many talents. He is co-founder of Alphabet Zoo and Print on Paper, both creative, dynamic, collaborative workshop spaces that focus on cross-disciplinary artistic expression (Print on Paper has since closed), as well as a zine artist, a draftsman and a printmaker with roots in Artist Proof Studio, where he studied in 2009.

His current body of work, viewable on his Instagram feed, explores his relationship with and connection to the Ibandla IamaNazaretha church and its leader, Mduduzi Shembe. “It’s a lineage from my dad’s side, so my grandmother. Growing up, I was scared of telling people how related we are, that it’s part of my lineage, mainly because [I felt that] people would judge me,” he says.

Ngoyi wanted his work to be views on its own merits and not in relation to this historical and religious persona. These drawings can be viewed as evocative, compelling reconciliations with this aspect of his identity, but also ways of exploring the persistent and complex effects of foreign interference in SA.

“Colonialism is still around,” Ngoyi says. “I’m not talking about wrongdoings in a bad way, but wrongdoings that actually led the church to become what it is now. Without colonialism, IamaNazaretha would not exist the way it is now. They’ve taken some of the European influence to look like they do to us today.”  In this way, Ngoyi’s renderings of churchgoers in the process of worship, conversing, framed by clean white lines that bisect the page, are nuanced evocations of the subtle yet complicated power dynamics inherent in the colonial programme. 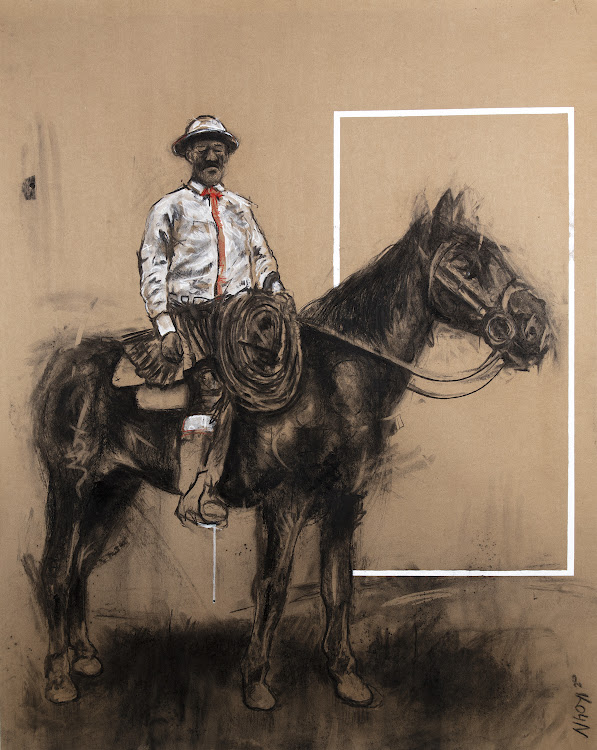 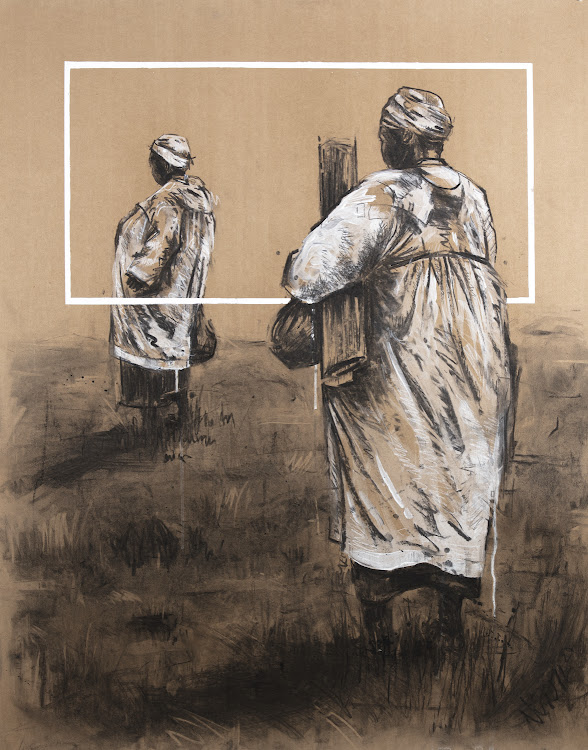 My introduction to Luyanda Zindela was a self-made video where he relates his experience of being an artist while simultaneously working on one of his pieces. His practice, which inspired by printmaking, is almost meditative in its approach, involving multitudes of small ink marks to build a larger image.

In fact, it’s this methodology that speaks to Zindela’s conceptual underpinnings. “Hard lockdown was a time for me to really reflect on what I wanted to make art about,” he says. “I was more interested in making art that stemmed from my listening to the voices around me. The things that matter to me.”

During the isolation brought about by the Covid-19 hard lockdown, Zindela mined his documentation of interactions with friends and family as a foundation for a new body of work. The many hundreds of tiny cross-hatches and stippling that comprise each image, he says, embody the thousands of hours that are part of our everyday social interactions with those we choose to have in our lives. “You’re starting to see black artists such as myself starting to explore their everyday experiences. Finding a way to make a commentary on the world using their broader experiences and lives as a lens.”

His most recent solo exhibition at Cape Town’s SMAC Gallery at the beginning of October featured a body of work that examines in minute detail these intimate relationships with those close to him. “I explore how my self portrait is formed through my close friendships,” Zindela says. “I’ve decided to look inward, rather than speaking outwards.”

The titles of his works tell the stories of navigating the highs and lows of social life in contemporary SA, such as Mah, what did you honestly see in ubabab? ... a snippet of a conversation with his mother, and the moment he realised his relationship with her had reached a point where they could converse as adults.

An artist as well as a curator, Zindela has racked up an impressive array of awards and accolades during his relatively short career. He received the Absa L’Atelier Merit Award in 2014, was awarded an Ampersand Foundation residency programme in New York in 2015, and was a runner-up at the Sasol New Signatures competition in 2019. 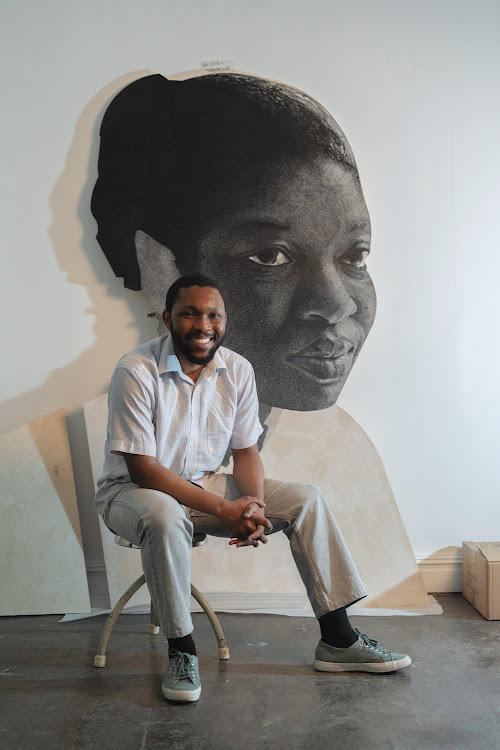 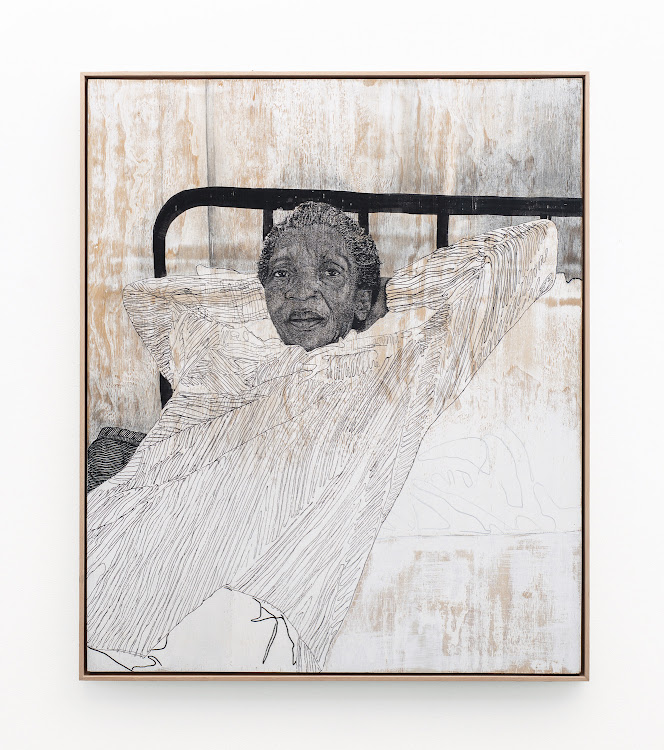 Luyanda Zindela, “Mah, what did you honestly see in ubaba? What were his redeeming qualities? Did he have redeeming qualities?” - “Luyanda. Mntanam” - leans back - “Ubab’ wakho. Wayemuhle”. (Luyanda. My child. Your father. Was attractive). - “And?” - “Wayemude.” (He was tall), 2020

Invest in artists who are experimenting and feeling things out

In this month’s column, we explore local artists who find their inspiration in the human form, in all of its unique and complex fragility
Art & Design
10 months ago
Next Article
© Wanted 2022 - If you would like to reproduce this article please email us.