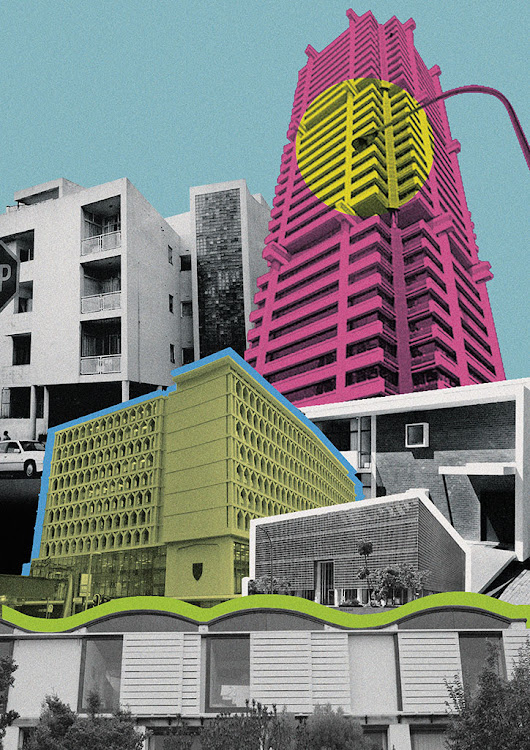 Until fairly recently, modernism has been viewed by the uninitiated as a brutal style, appealing to eccentric architects, design puritans, and pretty much nobody else. The movement emerged in Europe after WW1, with a new breed of designers rejecting pastiche references to obsolete historical styles in favour of beautiful, uncluttered, light-filled, functional buildings. Modernism soon reached South Africa via the Wits School of Architecture and its new generation of pioneers included Rex Martienssen, John Fassler, Harold Le Roith, and others. The modernist’s famed motto was “less is more” and today the timeless elegance of modernist design is quickly gaining cult status. Here are six home-grown monuments to the understated, mid-century elegance of the movement.

Regarded as one of South Africa’s most important modern-movement structures, Radoma Court occupies a prominent corner stand in Bellevue, with both southern and eastern street frontages. The design perfectly considers Joburg’s climate. Continuous banded windows wrap the shady southern facade, while its exposed western side is shielded by deep, heavily modelled balconies, providing insulation from the baking afternoon sun. A boldly curved glass-brick staircase tower acknowledges the importance of Radoma’s corner location and accentuates the entrance porch, tucked between intersecting apartment wings. Colour plays an important part in the building’s design, defining its forms and adding interest to its surfaces.

One of only a handful of “hanging” skyscrapers in the world (rumours persist of two others in Canada), this tower was constructed from the top down. The structure’s concrete floor plates were hung from a central service core, rather than supported on a more traditional column grid. Probably one of the country’s most striking skyscrapers, a delicate glass skin, supported by virtually invisible brushed-aluminium brackets, encloses the ground floor, blurring the boundary between private lobby space and the public urban plaza surrounding it. Precise modular interiors perfectly juxtapose the bank’s South African art collections, including colourful Cecily Sash mosaics on the office levels and Edoardo Villa sculptures in the gallery below the Simmonds Street plaza.

Martienssen considered four separate sites around Johannesburg before settling on a gently sloping lot along Cruden Bay Road for his home. The plan of this modest structure exhibits the linear clarity of a Corbusien villa. Interconnected living spaces occupy the ground level while the bedrooms and a spacious study enjoy the private upper floor. The striking street facade is an exercise in classical geometric composition. Meticulously considered interrelationships of colour, texture, solid, and void elevate the structure from a mere building to an abstract architectural collage. A protruding linear frame wraps the house, like a painting — floating, elegant, and weightless above the earth.

This landmark Camps Bay home, with a strong nod to contextual indigenous architecture, was designed by local architect Gawie Fagan and self-built by the Fagan family in 1965. The hand-crafted building oozes attention to detail. Crisp-white facades are offset by generous window panes framing expansive ocean vistas. A gorgeous undulating roof-scape echoes the churning Atlantic ocean, creating a home both uniquely striking and perfectly at one with its natural surroundings.

An expressionist Y-column facade screen, sketched by Abramowich to mimic the shadows of his favourite shade tree, sets Innes apart from its mid-century contemporaries. The building — more a playful Brazilian than corporate Joburger — was carefully adapted to the inner city locale, providing a masterfully minimalist counterpoint to the neoclassical high court building across Pritchard Street. Clad in opalescent white mosaic, this downtown icon still shimmers in the golden highveld sunlight, as crisp and relevant today as it was almost 60 years ago.

South Africa is home to some of the most beautiful buildings, Brian McKechnie highlights six
Art & Design
2 years ago