Art meets virtual reality: We are all Mary now 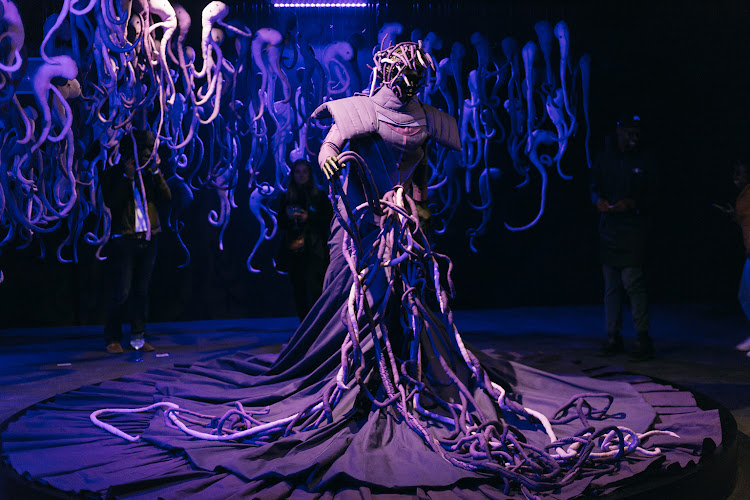 There has been a lot of talk about how virtual reality (VR) will bring about the next revolution in art. It might or might not – there are significant chunks of the art world that still see video installations as dubious – but at this early stage of the technology’s development, the question is, more than anything, what to do with it? Or perhaps, what will artists make of it?

The Mixed Reality Workshop (TMRW) is a new gallery at Keyes Art Mile in Rosebank that has been created to answer just that question. It is a not-for-profit company that has been set up to give South African artists the opportunity to collaborate with a group of experts in VR and its associated versions and combinations of realities. It’s called The Digital Foundry and has little else on its agenda than the desire to explore what happens when you take artists into the digital realm.

The first to have the opportunity was Mary Sibande, whose foray into the medium, A Crescendo of Ecstasy, is showing at TMRW until the end of July.

Balmain and Gucci: the mannequins have eyes

Her response works on a number of levels. First, it is a real art installation of physical objects in the gallery space – Sibande’s unnamed purple figure, drawn from her Standard Bank Young Artist Award exhibition a few years ago The Purple Shall Govern, is surrounded by a swarm of strange suspended semi-formed worm/foetus/alien/organlike creatures suspended from the ceiling. Then, within this installation, there are a series of points where you put on VR goggles and headphones and find yourself suspended in virtual space looking at a VR rendition of what was in front of you a moment before. In this parallel dimension, though, the animated forms move and there are haunting sounds piped through the headphones. It is indeed immersive. You can look up and down and all around you. The sensation is a bit like being transported into the inner space of your own head. 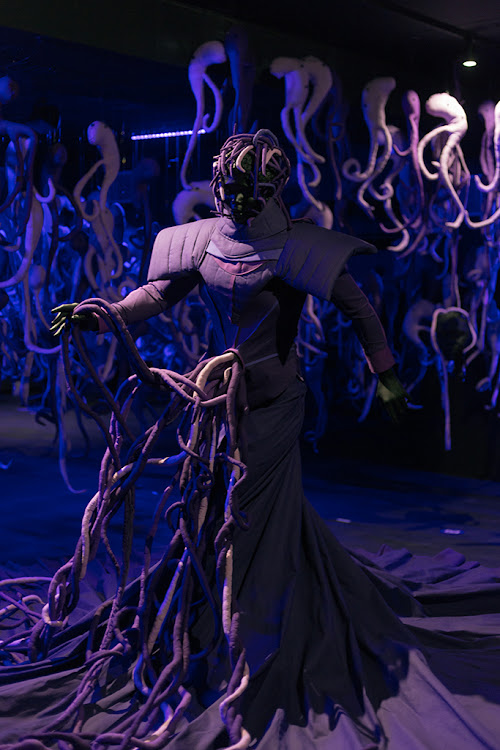 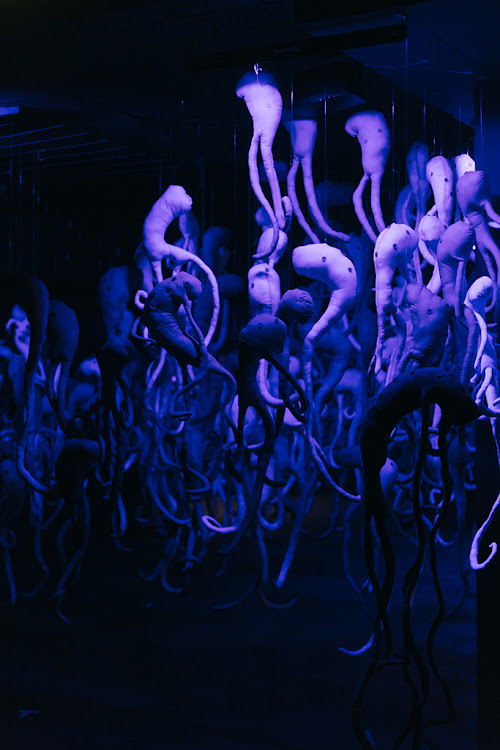 This layering of artistic realities alone is an act of resistance to the totalising, mind-engulfing effect the VR goggles have. The odd thing about VR is the extent to which it displaces the viewer’s own imaginative engagement. Although you actively engage with the artwork, and have a degree of control over where you look and what you see, this sense of participation seems to heighten the illusion of agency. It’s why movies about immersive futuristic technologies, such as The Matrix, have tended to gravitate to the question of mind-control rather than their potential to free the mind.

It’s a medium that clearly causes anxiety about the godlike powers it gives the creator of the virtual world. Just by forcing us to acknowledge or remember, even when we’re in the virtual realm, that there’s a physical world we’re in at the same time, Sibande seems to undercut the temptation VR offers to take us away totally. Of course, the effect is complicated by the fact that the physically real space we’re in is already the conceptual space of the installation… it’s also art space.

Sibande’s work has always captured something of the tension between the liberating power of the imagination and its limits. Her famous Sophie figure explores the potential of a private, personal fantasy of transformation – from her position as a domestic servant into a grand Victorian lady – and externalises it in the blue servant’s uniform rendered as an elaborate Victorian dress. The complexity of the Sophie figure has to do not just with the power of the imagination to subvert social and cultural power but also the discomfort of acknowledging the vulnerability of anyone who has these fantasies exposed.

Part of the power of Sibande’s work is in the sense of shock or rupture that you feel when you look at the dreaming figure of Sophie, eyes closed in peace and private contemplation, and yet with her fantasy externalised. It feels as if you’re prying into something personal. Sibande’s artistic courage in taking that step and exposing Sophie’s imaginings to an external gaze is an act of imaginative reparation and a dignifying acknowledgement of that fantasy with all its limitations. But Sophie’s imagination is caught between being her own and her imaginative aspirations being limited or curtailed by terms that are not her own.

Sibande took the idea further with the unnamed purple figure, who is drawn into this VR artwork. The figure seemed in some ways to be a frustrated response to the way that the massive success of Sophie reached a point at which it began to limit Sibande as an artist. While works such as the large-scale digital print in the foyer outside the TMRW gallery shows the purple figure shedding Sophie’s uniform, the unformed shapes she’s surrounded with represent at once the potential and the difficulty of imagining what’s next. This, of course, refers not just to Sibande as an artist but more broadly to the fact that, despite nominal democratic freedom, very little has changed in the social and cultural landscape, especially for the Sophies of the world. 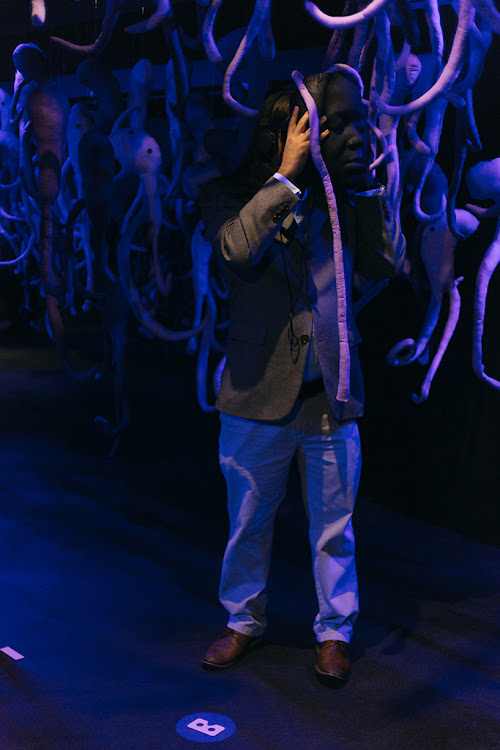 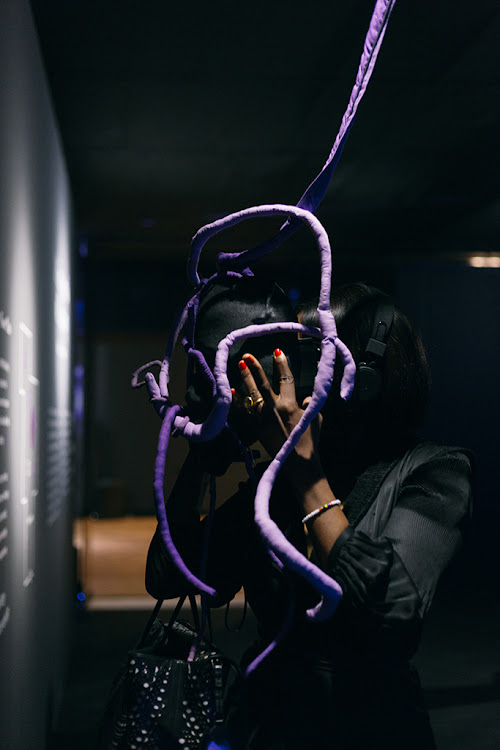 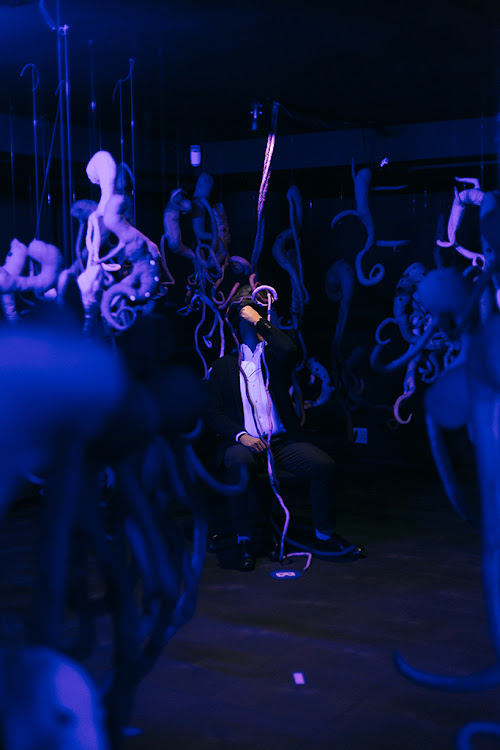 In these respects, Sibande’s work has always involved dramatising the interior world of the imagination – making private fantasy visible to an outside gaze. Her experiment in VR goes in the other direction. Rather than externalising what’s in the mind or imagination of the artist, the physical sculpture (which does that) is internalised in the mind of the viewer.

The “immersive” experience of VR is a confusing mix of stepping inside your own headspace and having your headspace displaced by someone else’s. The VR headsets in A Crescendo have masks of the purple figure’s face (moulded from the artist’s) attached to them, so when you place them over your eyes, you symbolically become a version of the figure, too. (At the same time, you become a spectacle to others in the gallery.  As you look around and respond to the visions inside your head – unlike Sophie’s, invisible to others – you look like a bit of a fool. As a viewer, you become another figure in the installation, enacting your immersion in an alternative reality. Like Sophie, your imagination makes you slightly ridiculous but human in your vulnerability.)

And, once again, the terms of the viewer’s participation in A Crescendo immediately come into question in this multi-layered artwork. In the self-dramatisation of Sophie and the purple figure, Sibande implicates herself as an artist in a broader cultural transformation, but in this work, she also implicates all of us.

• Mary Sibande’s A Crescendo of Ecstasy is showing at TMRW at the Keyes Art Mile in Rosebank until the end of July 2018.

'Botanical Art Worldwide', an exhibition at the Everard Read Gallery, hammers home the popularity and vitality of this simultaneously new and ...
Art & Design
4 years ago

'Harmonia: Sacred Geometry, the pattern of existence' on at the Standard Bank Gallery in Johannesburg comes with a twist – it’s all new work…
Art & Design
4 years ago

Our capacity for consuming images seems limitless so what is the point of exhibiting them?

Adam Broomberg and Oliver Chanarin challenge notions of photography in the throwaway digital era with their exhibition
Art & Design
4 years ago
Next Article
© Wanted 2022 - If you would like to reproduce this article please email us.