Ulysse and Devialet collaborate to create a watch at the intersection of engineering, design and haute horlogerie 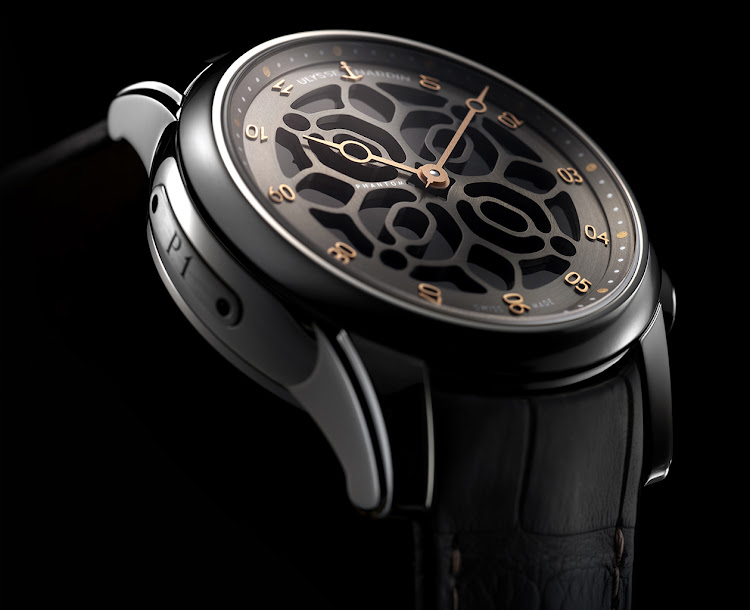 Diversity drives innovation. Referred to as the “Medici Effect”, it is at the intersection of disciplines, cultures and domains where we see extraordinary new ideas come to life. When it comes to striking watches, manufactures usually turn to their in-house movement makers for the complication and to resolve the tone and pitch of the chime. Although the striking mechanism is nothing new – it was conceived way before the invention of electric lighting as a means of telling the time in the dark – Ulysse Nardin turned to Devialet, a new generation of sound experts, to assist in the creation of a high-performance striking watch.

Audiophiles will be familiar with Devialet’s internationally acclaimed semi-spherical Phantom wireless speakers, with their patented ADH (Analog Digital Hybrid) technology, which delivers “high-res sound with no saturation, no distortion and no background noise”. About the size of a motorcycle helmet, these connected speakers create unrivaled quality of sound up to 108 decibels SPL. The Ulysse Nardin Hourstriker Phantom was created at the intersection of engineering, design and haute horlogerie, highlighting not only the expertise of this revolutionary French luxury audio firm but also the audacious spirit of the watchmaker, as seen in its avant garde Freak collection.

In a classic striking mechanism, a hammer hits a gong and generates sound frequencies, which have to resonate through movement and case before being heard. With the Hourstriker Phantom, there are a series of torsion arms that transmit the sound vibrations direct to a special membrane, perforated with eight openings, on the underside of the watch. Behaving much like a speaker, the membrane has a large surface area for more air displacement which, in turn, creates a higher sound level and quality. 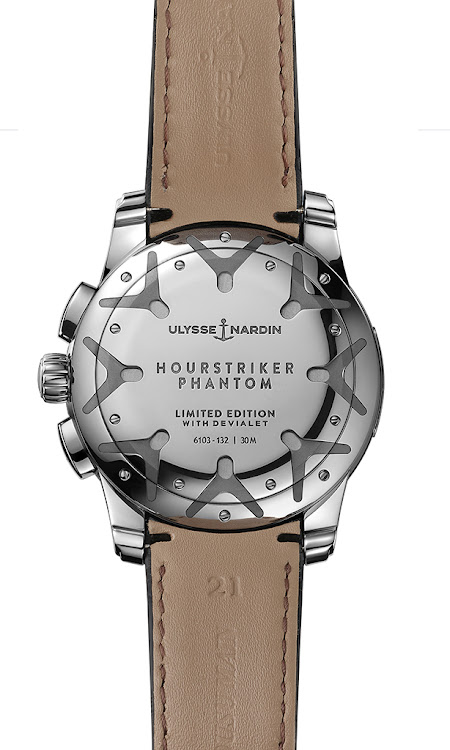 Chiming on the hour and half-hour, the company claims the Hourstriker Phantom has the best performance ever recorded on a striking watch, with 85 decibels to 100mm. Its polished 43mm titanium case, which houses the UN-610 automatic manufacture movement, also amplifies the sound and extends its resonance. The satin-brushed anthracite skeletal dial design is inspired by “Chladni figures” –patterns formed on plates covered with sand caused by various vibratory waves –and alludes to the protective net over the tweeter of the Devialet Phantom.

Listed at CHF 72 500 (about R1,1-million), the Hourstriker Phantom is apparently “the most affordable striking watch” on the market. It is presented on a black alligator strap and is limited to 85 pieces. To experience the 85 decibels, visit Ulysse Nardin Instagram.

One of the founders Emmanuel Nardin, who worked on the Hourstriker Phantom, is also a descendant of the Ulysse Nardin family.

Lovers of jazz will appreciate the collaboration between Devialet and record label Fondamenta, to unearth lost legendary jazz recordings and bring them back to life through The Lost Recordings project. Using Devialet’s technology, Fondamenta developed Phoenix Mastering, a unique audio excavation process designed to recover the full richness of analog tapes. So far, the sold-out collection has included live performances by Ella Fitzgerald at the Concertgebouw, Amsterdam, in 1961; a 1975 recording of Sarah Vaughan opening the Jazz Festival in Laren, near the city, and legendary recordings of Oscar Peterson, Dave Brubeck and Bill Evans.

The Classic Fusion is a collection of intricate and considered timepieces, writes Gary Cotterell
Watches & Jewellery
2 years ago

Up-to-the-minute collection is a new take on classic sport watches
Watches & Jewellery
2 years ago
Next Article
© Wanted 2022 - If you would like to reproduce this article please email us.